“What is the toughest job you have ever performed?”

A while ago the members of the secret society of UK FI Bloggers were sitting around their virtual clubhouse discussing weighty matters, exchanging gems of wisdom, and trading witty banter.

Picture the Avengers gathered in Stark Tower, plotting to defeat whichever evil cartoon bad guy is threatening to blow up the world or elect a spectacularly unsuitable populist buffoon to run a country equipped with nuclear weapons.

Well, it is almost exactly nothing like that. Fewer superpowers. Less lycra. Possessing a coolness quotient closer to a mid-1990s Microsoft product launch than the Avengers Assemble.

Like many secret societies, this is a group of everyday folks from all walks of life who have sought out community of like-minded folks who “get it”.

Few, if any, people in their real lives do!

As they often do, the conversation that day took a random turn, then disappeared down a rabbit hole.

One member asked what was the toughest job you had ever performed?

My answer was immediate. Requiring no thought or introspection: palliative carer.

A role I performed only briefly. Gruelling, relentless, and thankless in equal measure.

One that taught me a surprising amount about my own ethics, values, and moral compass.

My second-toughest assignment resembled the first in more than a few ways.

Similar duties. Almost as difficult working conditions. Meeting the most basic needs of a person totally dependent upon my care. This time I was a stay-at-home parent caring for a young baby.

There was clear daylight between those unpaid roles and the level of difficulty posed by my third toughest gig: the student job I worked in a photo processing lab.

In recent times much has been written about the emotional toll those working as social media content moderators endure while screening and censoring a never-ending firehose of imagery showcasing every facet of human activity. Scattered in amongst those selfies, happy snaps, and holiday photos are images of humanity at its absolute worst, doing things with and to each other that defy imagination.

Things that cannot be unseen.

Human nature hasn’t changed throughout the ages, but the technology used to broadcast it has.

That role provided a broad insight into the ethics, values, and moral compasses of others.

Their behaviours. Their judgement. Their risk versus reward decision-making framework. How to manage them as stakeholders.

When I reflected on that “toughest job” question some more, I realised that none of the professional engagements I have undertaken over the past 20+ years has come close to the “character building” experiences endured via those three roles.

It isn’t even close.

Every engagement includes its share of bad days. A lack of fulfilment while performing work that in the scheme of things mostly does not matter. Yet all seemed sufficiently lucrative to make the sale of my time for the money on offer appear to be a reasonable trade-off. At the time.

Of all those professional roles, my time at an investment bank stands out as being the worst. Horribly misaligned commercial incentives resulted in a working culture so toxic it actually killed people. Vast sums of money on the line. The only thing bigger than the numbers were the inflated egos.

However, none of those professional roles has involved being shot at or blown up.

No heavy lifting or working outdoors in the rain.

All things considered, I’ve had a pretty good run.

I need only to remember those three tough roles to realise that I have survived worse. Of course, that doesn’t necessarily make the current bad day at the office any easier to accept. But it does help keep things in perspective!

Watching my children grow and develop has been a fascinating experience.

In the beginning, unable even to support their own heads. Then one day they suddenly could.

Sitting up. Rolling over. Crawling. Walking. Running. Climbing. Riding bikes. Swimming. An evolution of skills, each opening up a whole new world of possibilities and challenges to conquer.

An endless desire for more. Striving to better themselves. Constantly improve. Develop. Grow.

Applying hard-won knowledge and skills towards attaining the next run on the developmental ladder.

Each milestone is celebrated. Taken for granted. Then swiftly forgotten in the pursuit of the next goal.

The difficulty level increases at each level, but the marginal gain from achieving the next milestone diminishes.

The Office of National Statistics publish some fascinating statistics about life satisfaction. 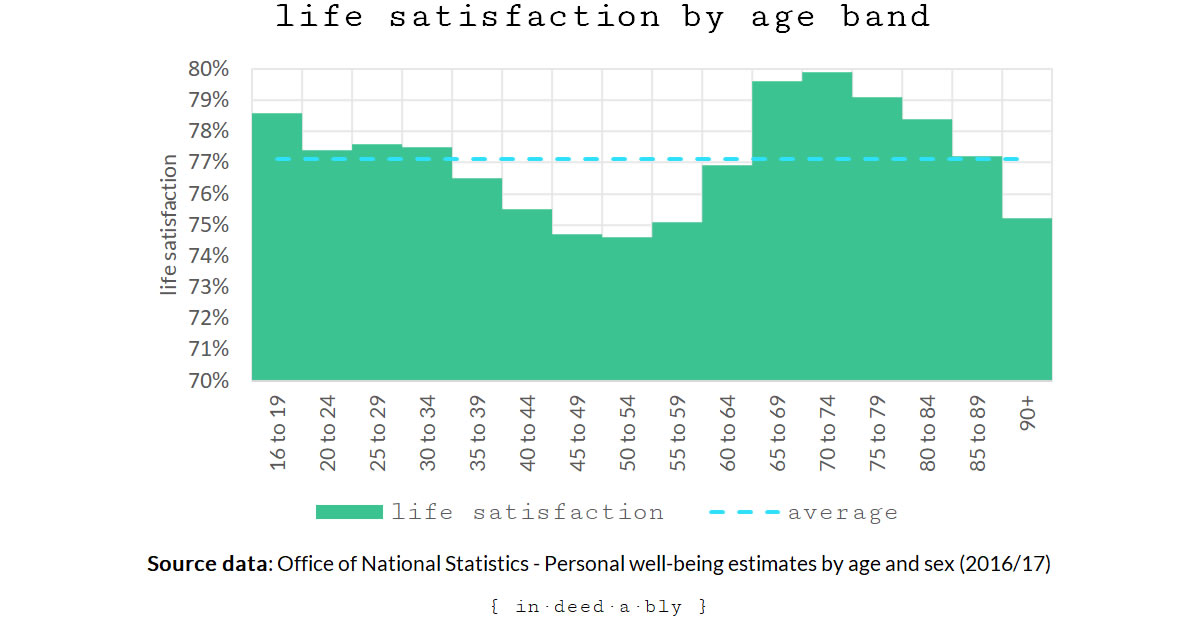 They suggest that people’s satisfaction with their lives steadily drops from around the age of 20.

While the findings are generalisations drawn from self-reported survey results, similar results have been reported in other developed countries. They paint an interesting picture.

At the age of 20 many of us are full of ambition and idealism. We are going to rule the world. Change things for the better. Do work that matters. Make a difference.

The autonomy of adulthood is relatively new. Many of us are largely responsibility free.

Real-life has a way of laughing at the naïvety of youth! Many of us learn the swift brutal lesson that we’re really just faceless interchangeable cogs in a vast machine. Neither unique nor special, despite what our parents and participation trophies told us to the contrary while growing up.

The only people who claim to care about our hopes and dreams are those trying to sell us something.

By the time we reach our 40s, our ambitions have faded. Careers have topped out. Responsibilities and obligations abound. The realisation sinks in that many of those hopes and dreams simply aren’t going to happen.

Expectations shift. Priorities change. An appreciation for what we already have begins to replace the constant desire for more.

When people talk about seeking “experiences not things”, they don’t mean ticking off clichéd postcard destinations from a bucket list. What they really mean is focussing on the friends and family we enjoy those experiences with. A humble barbecue or a picnic enjoyed in good company can provide a rich experience indeed.

Skip ahead to our 60s. Children are fully grown. Mortgages have hopefully been paid off. Pensions become accessible. Retirement beckons. We have greater control of our time investment decisions.

At that point, many of us will enjoy a level of autonomy last seen back in those halcyon days of our early 20s, combined with the confidence gained from a lifetime of experience. The vanity of youth has faded to a distant memory. Now is the time to age disgracefully!

Witnessing the long decline of someone suffering a terminal illness was humbling. It many ways it was like watching that same developmental journey, only in reverse.

A once strong body atrophying. A once sharp mind becoming addled and confused.

Shedding the stamina to do a lot for a long time.

Losing the energy to do much at all.

An intriguing metamorphosis seems to occur at the point that the patient realises that they aren’t going to recover. The angst, cursing the gods, and protesting of the unfairness of it all vanishes.

In its place appears a calm acceptance. Finding contentment in what they already have.

The struggle for meaning gets abandoned, as more immediate concerns like the struggle to eat, drink, or breathe assert themselves.

Devolving back to a child-like existence. Then a toddler. Finally an infant. Unable to perform even the most basic tasks for themselves.

The secret society has provided a fascinating microcosm for observing how people’s financial motivations and drivers evolve over the course of their lives.

Members vary greatly by age, aspiration, background, family situation, lifestyle choice, and net worth. There are two common threads that run through them all. A love of writing, and a desire for control over how they invest their time.

The collective sharing of their stories has mirrored that “u” shaped life satisfaction curve.

Many of the younger and relatively responsibility-free bloggers believe they could sustainably survive on £8,000 – £10,000 per year. I commend their ambition and optimism. With a social security safety net to fall back on, it may even be possible. Though it would be a fragile and rarely comfortable existence.

The largest cohort of members is made up of middle-aged folks, many with young families. They have experienced more of the economic cycle. Many are struggling with childcare costs, mortgages, and student debts. Living in fear of redundancy and obsolescence.

The older members of this group have first-hand knowledge that the markets can go down as well as up. Of what it feels like to see their net worth suddenly plummet. Then take years to recover. They are resigned to the fact that the economic gods will occasionally piss upon them from a great height, and there is precious little they can do about it.

While many of this group are seeking to leave the rat race, they are often yearning for something more than just a paycheque. More fulfilment. More control. More time.

Searching for meaning is an age-old problem. It is a nice problem to have, in a similar vein to my three toughest jobs making all my professional roles seem easy by comparison.

A blogger who has the capacity to ponder those big questions like purpose and meaning is probably no longer worrying about where their next meal will come from or how they will pay the rent. That in itself is a win worthy of celebration.

The secret society contains a few bloggers who have survived the dip, and are climbing up the other side of that “u” curve. Financial Independence in some form has been achieved, through a combination of bank balance and realistic expectations.

They recognise that the main drivers behind life satisfaction are non-financial ones. Easy to say from the lofty perch of the financially independent. Hard to imagine for those down below, desperately wishing to join their ranks.

By that point, the pursuit of financial goals has transformed into a hobby in its own right. Net worth is merely a means of keeping score.

There are vanishingly few bloggers who continue writing once they make the decision to leave the ranks of the gainfully employed. They have won the game. Their story is at an end.

In real life, their adventures continue. However, in many cases the blogger recognises that those adventures will no longer be relatable to the audience who have eagerly followed their journey.

Most retire from the secret society and get on with the next phase of their lives.

For some, retirement proves to be the toughest job of all.

What is the toughest job you have ever performed?

To hear some alternative points of view check out the other responses to this thought experiment: