I sipped a cold beer outside the lovely sidewalk café, and watched with mild amusement as the many “lobster people” (sunburnt tourists) ambled along the Rue Massena. The “slip, slop, slap” public health message of my youth appears not to have made it to Europe.

Glancing across the table, my younger son was thoroughly absorbed on my iPhone helping Perry the Platypus puzzle his way through a maze.

Beside him sat my elder son, thumbs dancing across his own smart phone as he concurrently conducted half a dozen different WhatsApp chats without missing a beat.

Seated on my side of the table was the boy’s grandmother, engrossed John Grisham’s latest thriller on her Kindle.

I sighed and savoured the moment of serenity while they happily ignored me in favour of doing something they enjoyed.

I probably should feel guilty about committing some form of parenting fail… but I didn’t. Instead, I stole the last piece of delicious freshly baked bread from the basket while my dining companions were distracted!

Looking along the café strip, I observed that a bit over half the patrons were using mobile devices to interact with their imaginary internet friends or passively consume the wonders of the web.

I remembered reading an interview with Marc Andreessen in the early 2000s, where he observed that “software is eating the world”. His assertion was that in time any function that can be performed by software eventually will be, which was bad news for hardware manufacturers.

Going by the proliferation of smart phones I observed, he was probably right.

Out of curiosity I flicked through the apps on my iPhone and inventoried the physical “things” it had replaced. 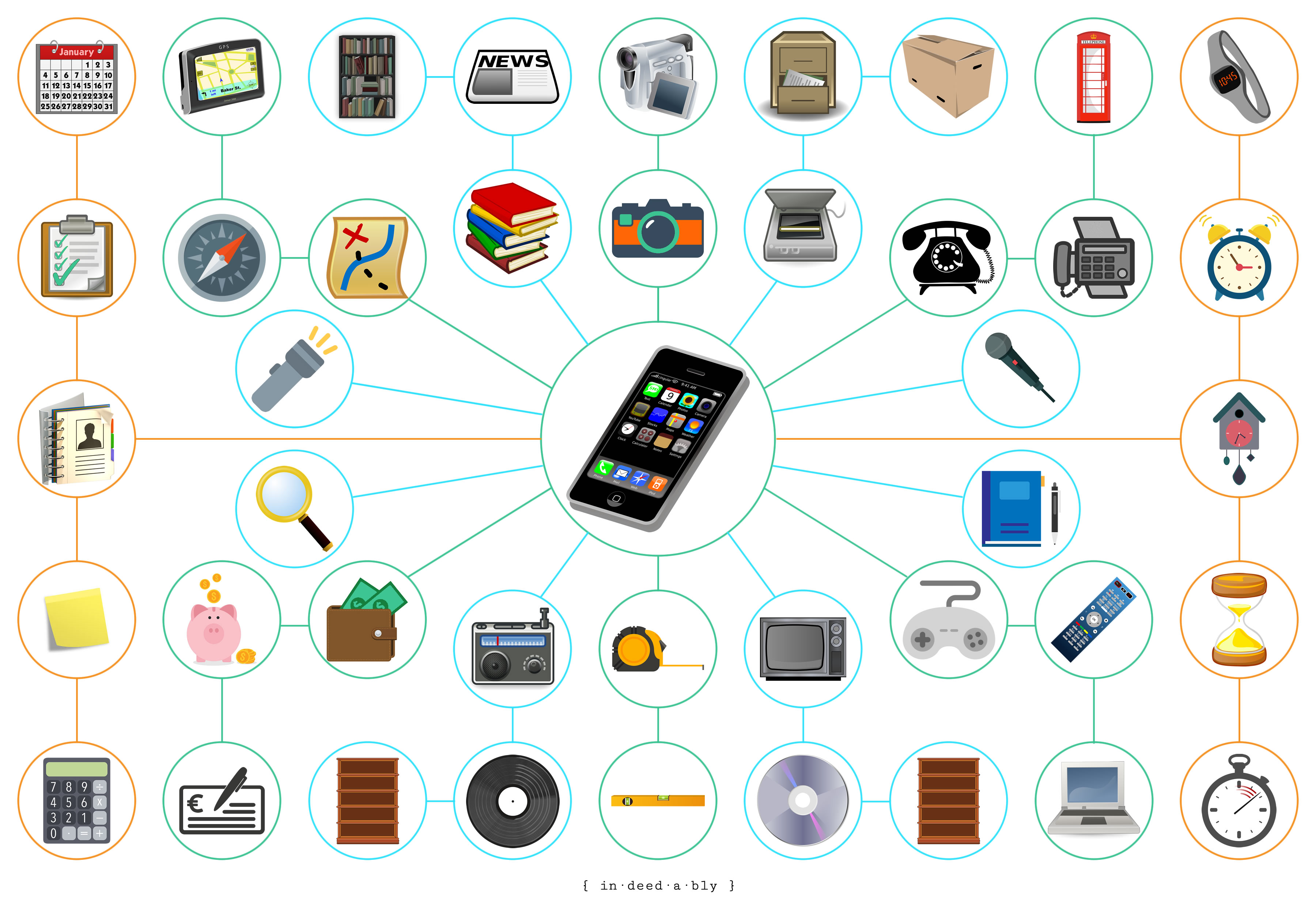 Evolution of a smart phone.

I was a little surprised at how long my list became before I exceeded my level of interest!

Certainly I carry around less crap in my pockets than I used to. Just my house key, an ancient (and half-empty) Bellroy wallet, and my phone. Given I seldom use cash any more, I can see the day approaching when the wallet gets retired.

From that list, the thing I appreciate the most is probably the digitisation of collections. Long gone are the days where nearly every flat surface in a house is occupied by Billy bookcases full of books, music, and movies. So too are the loft/garage/shed full of filing boxes.

In fact low cost “on demand” services provided by the likes of Spotify, Netflix, and Amazon have largely consigned the collecting and curating of media content as an irrelevant time-wasting activity… much as a functional search capability long ago eliminated the need to file, organise and archive/delete emails.

Is there nothing smart phones cannot do?

After dinner we grabbed a sneaky ice cream. The 30+ degree summer’s day conspired against my younger son, who ended up wearing more of his cookie dough flavoured desert than he ate. Before long he was a hot sticky mess! 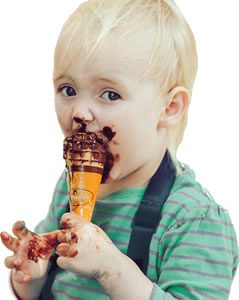 He asked me for a wet wipe. I didn’t have one.

Water? None of that either.

At that point my older boy unhelpfully observed that I committed another parenting fail, as their mother always carried that sort of thing in her handbag. There are some things a smart phone simply can’t do!

With much fussing their grandmother pushed me out of the way, magically producing packet of baby wipes from the depths of her Tardis like handbag, and commenced a mop-up operation rivalling the Exxon Valdez in size and complexity.

I wondered briefly about that, it had been years since her grandchildren ceased wearing nappies!

a gentleman never looks inside a lady’s handbag

Are handbags technically redundant? Not so much… 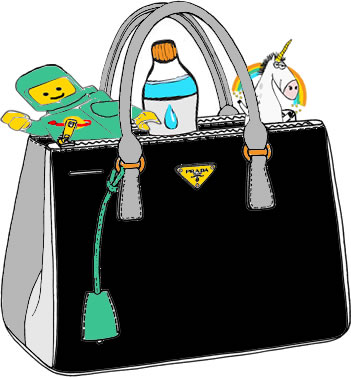 Later that night I busted my younger son rummaging through his grandmother’s handbag. He yelped in fright and lost his grip, sending the contents of the bag spilling across the floor.

As a young child I had learned the hard way that “a gentleman never looks inside a lady’s handbag”.

My father then added under his breath:

“only archaeologists are qualified to search through a woman’s purse… they need to make absolutely sure the former owner had been dead for at least 100 years first to avoid getting hulked at or haunted”.

As we hurriedly shovelled everything back I the bag I did a quick inventory:

Handbag contents, mostly not made technically redundant by smart phones.

By the time we had finished, the improbably small handbag weighed a tonne. I suspected there may be some dark magic at work, perhaps a Dungeons & Dragons style Bag of Holding. Either way, with a sufficient backswing it could make quite an effective burglar deterrent!

There was surprisingly little overlap between the handbag contents and my list of things that smart phones had made redundant. Yet there were a vast number of items being hauled about, over and above the keys, wallet and phone that travel around in my pockets on a daily basis.

I briefly considered whether I should be carrying around any of this other stuff with me.

Nah! With access to a functional credit card that was unnecessary, as I could purchase whatever was required when it was required. The ice cream clean up may have been slightly slower, but on balance I prefer to travel light and pay what it costs for that convenience.

My son would argue differently, the lure of Lego and Oreos proving too much temptation.