Why don’t you go to work every day?

These are the questions I ask my kids every day at bedtime.

This is a special time of the day, as suddenly talking to me is the thing they most want to do.

Perhaps this is because I am a fantastic listener. I’m not, but it could have been true.

Perhaps it is the absence of distractions; no more screen time or homework to seize their attention.

Perhaps they are master procrastinators, every extra minute stolen before sleep feels like winning.

Whatever the reason, this is when the kids unload about what is going on in their lives. 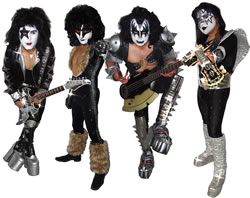 When I grow up I’m going to be the guitarist in Kiss? Image credit: Wiki Commons.

That they are having trouble with a bully.

Or like a pretty girl, but are afraid her “Mean Girl” friends will laugh if he tries to talk to her.

Or has decided when they grow up they are going to play lead guitar in the 1970s glam rock band Kiss…. those Scooby Doo re-runs have a lot to answer for!

Or got in trouble for including the teacher’s handbag in the Year 1 science experiment testing whether things were waterproof. It wasn’t.

what did you learn from it?

I always ask the “what did you learn from it?” question to encourage analysis and reflection on an event.

What could be done differently next time?

Over the last 20+ years I have worked with dozens of clients. Many conducted a post-project implementation post-mortem, seeking to identify and collate “lessons learned”.

These would have been useful exercises if honest feedback and seeking to avoid repeating past mistakes been the desired outcome. In practice this is seldom the case.

Nobody wants to admit the root cause of a budget overrun or deadline slippage was indecisive management, corruption-driven patronage when selecting vendors, institutionalised incompetence, or poorly negotiated outsourcing agreements.

The thing is that very few problems are new, and hardly any are unique. The odds are pretty good that somebody, somewhere, has fallen into a similar hole at some point in history and already figured a way out.

Ray Dalio is a pretty smart bloke. He views most problems as being “another one of these”, essentially a pattern recognition exercise. If somebody has previously encountered scenario X then they should already know that taking action Y (or ceasing action Z) will save the day.

He isn’t wrong, and has made a considerable fortune following this approach in his own business.

However if Ray Dalio had been present in the majority of these retrospective sessions he would have been punched in the face, escorted off the premises, and/or lynched!

Stakeholders (generally) don’t want the truth, they want a politically saleable explanation with a convenient scapegoat,  preferably a third party. No wonder the majority of projects are abject failures or underwhelming at best!

Playing games and doing politics just isn’t my thing. Whenever the opportunity for genuine reflection about lessons learned arises, I jump on it.

Why don’t you go to work every day?

At bedtime tonight my younger son asked a very tricky question: “Why don’t you go to work every day? All the other Dads do.” 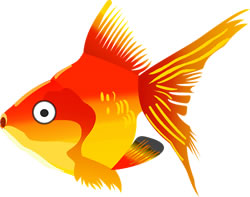 I must confess I gold-fished for a couple of seconds.

I got a couple of words into a glib explanation about how I was richer/smarter/better looking than the other Dads (at least one of those three is true).

Then it occurred to me that whatever I said would likely be parroted back to the other kids during playtime tomorrow, which could create some trouble.

If the parent’s race on sports day had proven anything, it was that some of the other fathers were bigger/stronger/faster/younger than me. For the record I finished 4th out of 24 Dads, mainly because I cheated first and cheated fastest!

In the end I hedged a little, telling my son that I:

All these things are true, but didn’t really answer his question.

My son accepted my answer.

He is a trusting six-year-old who hasn’t (yet) seen through the myth that his father is infallible.

However he is also smarter than I am, and I am certain I will hear more about it at future bedtimes.

So why don’t I have to go to work every day?

What lessons had I learned… that actually worked?

Save it before you can spend it

George Clason wrote that paying yourself first should led to riches over time.

Lesson learned: save it before you can spend it. You can’t invest what you haven’t got.

Saving a fixed percentage of my before-tax earnings meant that my savings ebbed and flowed with my income. Extracting the savings first meant they were ring-fenced before I had a chance to spend them.

This was a good thing because after rent, nursery fees, and nannies there was seldom much left!

Time is a precious resource

Tim Ferriss wrote that time is a precious resource, and should be assigned a tangible value. Any tasks that can be eliminated or reliably outsourced for less than that value, should be.

Lesson learned: if you can pay someone else to do something adequately for less than you would charge to do it yourself, then do so… but only if you will honestly use the time saved for something more productive!

Hiring a former teacher to work as my after-school nanny has worked wonders for both my kids, giving them the help and guidance that I have neither the patience nor the qualifications to provide.

Investing time wisely is key to getting things done. We all have the same number of hours in our day, we just don’t always prioritise or allocate that time effectively.

Don’t do a half-assed job

Ayn Rand wrote a fascinating story about the struggle to do good work against a backdrop of lobbying, rent-seeking, and corruption.

Lesson learned: if you’re going to bother investing your time doing something at all, do it well.

Life isn’t fair, there will always be “looters” seeking to gain by pulling others down. Acceptable incompetence is widespread.

Always doing my best work, and never turning in a half-assed job, has resulted in much repeat business and word of mouth recommendations.

That has been the source of the majority of my clients over the years.

Money grows on trees, either your own or someone elses

MJ DeMarco wrote about the importance of developing money trees, perpetually sustainable cash flow generating assets or businesses. It also discusses the advantages of owning the business rather than working for one.

The book read like it was written by a mobile phone salesman, but the reasoning behind the author’s suggested approach was sound.

A salary is what you receive in exchange for turning up. Add up your annual bonus, commissions, and tips for the year… these are your reward for the actual effort you put in.

Divide this total by the number of working hours you invested to earn them. Is the Return On Investment higher or lower than the value you determined your time to be worth above?

If it isn’t then you have some serious thinking to do about how you are investing your time.

Good investments are self funding

Robert Kiyosaki wrote that investments should be self-funding, if not they probably aren’t really investments at all.

Lesson learned: If an investment is not cash flow positive then it compromises your lifestyle.

I have mixed feelings about Kiyosaki, there is a lot not to like. That said, the reasoning behind his cash flow quadrant concept was an eye-opening challenge to the conventional wisdom I had been raised on. 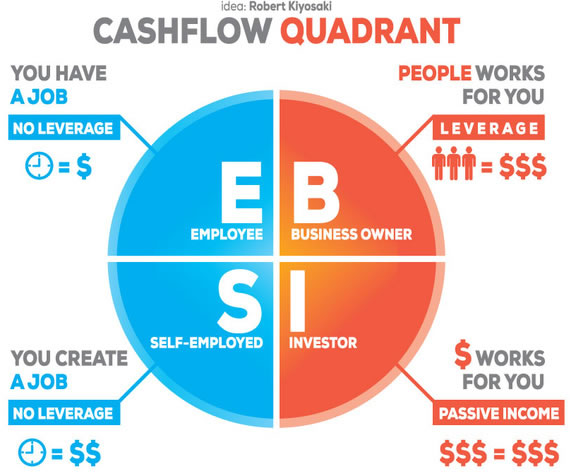 One thing I have concluded is that his approach ignores the potential for generating capital growth via adding value to businesses or real estate.

In my experience cash flow makes you feel rich, as it pays for your groceries. However it is capital gains that actually make you rich, and as such should not be ignored.

If you can’t pick the winners, own them all

Jack Bogle wrote that stock picking and timing the market were a mug’s game.

Lesson learned: If you can’t beat the market, own the market.

Having worked in equities research for a large investment bank, I witnessed first hand that an individual investor simply does not have access to the timely information required to consistently make well informed successful investment decisions.

Investing in a low-cost fund that owned all of the stocks all of the time was an approach that would win most of the time. The general approach is sound, though the book pumps up the tires of Vanguard (Bogle founded it) a bit much for my liking.

Learn when to break the rules

Benjamin Graham was a shrewd investor, lauded for developing a framework for value investing. His approach made a lot of sense, and formed the basis of Warren Buffett’s own investing approach.

However Graham himself observed that the majority of his money, and resulting fame, came from a single investment. That investment broke several of his own value investing rules, including: not putting too many eggs in a single basket, and selling a position once it no longer represented good value.

Lesson learned: Understand what the rules are, and more importantly why they exist, so that you can recognise when to follow them and when to break them.

There are a great many “rules” that are constantly being repeated to us, usually from a position of ignorance.

Many of these are designed to constrain or influence behaviours in some way.

Over the years I have learned to listen to all points of view, consider what they are saying, and then ignore the vast majority of them.

Does the person espousing the rules actually follow them? If yes, how did that work out for them? If no, then shut up.

So why don’t you go to work every day?

Carefully selecting those I listen to and learn from has had a major impact on where I am at today… doing the school drop-off.

Unlike many of the other parents, I don’t then have to race off and jump onto an overcrowded train so that I can spend the remaining daylight hours in uninspiring meetings and on pointless conference calls with the usual mixture of bullies, salary collectors, smiling assassins, bloviating egotists, and gormless lackwits.

That leaves my time free to think interesting thoughts… like how to describe my financial and work circumstances to my son in a way that is understandable, socially acceptable, and not going to get him beaten up in the schoolyard.

Unemployed it is then!