Better to be good than lucky

Risk-taking never disappears, it just changes shape, often to slip past the institutional and psychological defences erected after the last crisis.

Recently wrote Greg Ip in his fascinating 10-year anniversary retrospective on the Global Financial Crisis for the Wall Street Journal.

During that 10 year period, we have seen regulators ramp up requirements for governance and capital adequacy… then roll back many of those protections under a revised “time to let business do business again” mandate.

Borrowers can once again obtain self-certified “liar loans”. High street lenders are once again offering 100% (or even 120%) LTV mortgages.

As much as life seems to change quickly, many things don’t change at all.

That got me reflecting over my own life. What risks had I taken? Did anything change? What remained the same?

10 years ago I migrated to the United Kingdom, with a (then) dependent spouse and noisy energetic toddler in tow.

This began an epic 6+ year quest to string together working and/or skilled migrant visas required to eventually qualify for a British passport. It became a race against time, as the authorities steadily closed off many of the routes towards residency, and raised the bar ever higher for those few that remained. 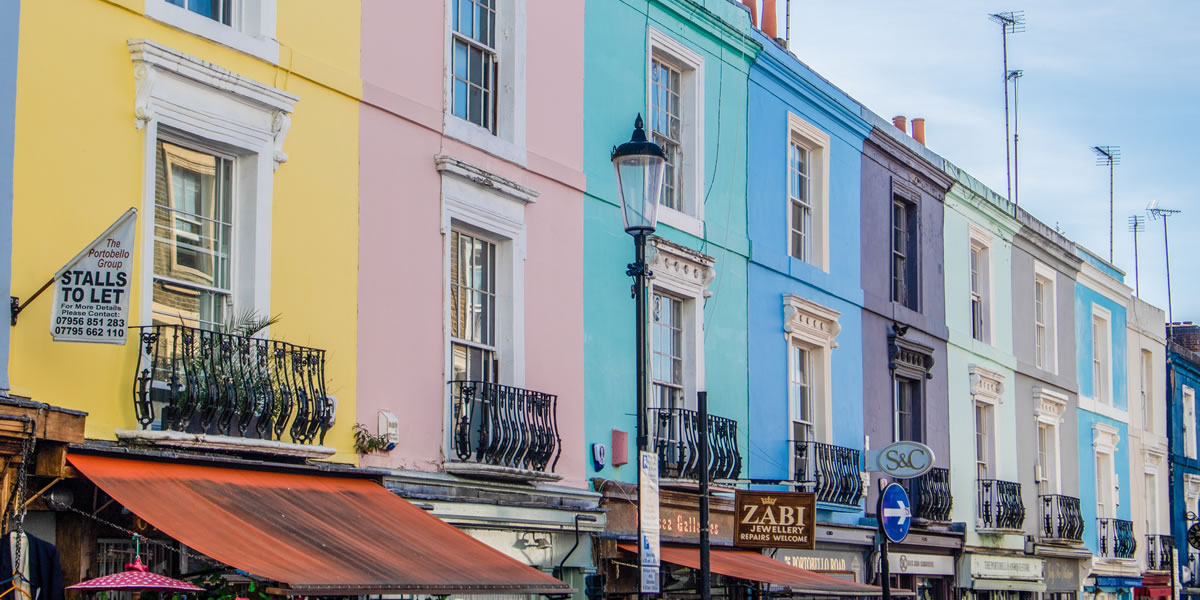 Residency in the United Kingdom is a moving target. Image credit: Medienservice.

I could have bought a very nice new car for the money spent on visa applications and legal fees.

The real killer was the earning criteria for the visas. If income didn’t accrue PAYE tax then for visa application purposes it did not exist. Needing to arrange my financial affairs in such a tax inefficient manner greatly offended my inner accountant!

However much it irked me, I sucked it up and played the game in order to win the prize: a British passport.

Then Brexit happened, slashing the value of that hard-won passport by 27/28ths. You can’t win them all!

Suck it up for 2 years and buy a house. Image credit: Images Money.

20 years ago Viagra was repurposed to promote happy endings, a couple of smart geeks founded a little company called Google, the US enjoyed its first budget surplus for a generation, and the Asian financial crisis occurred.

I was submitting my resignation from a secure permanent job as a management accountant, to follow a pretty girl halfway around the world. It seemed like a good idea at the time.

Given I ticked both boxes, that made me feel very welcome indeed!

I worked at that company for 2 years, earning enough to pay cash for a house back home. Every invoice they paid served as my own little f*ck you to the multiculturally enlightened CxO.

At the time I was delivering newspapers, in the rain, from a second-hand BMX bike with a milk crate strapped to the front.

Delivering newspapers in the rain was almost nothing like this. Image credit: geralt.

How much is your time worth?

The market value of something is determined by whatever a willing buyer is prepared to pay for it.

It turns out the time of an 11-year-old paper boy isn’t all that valuable, 4 hours of my time was worth roughly the price of a Big Mac. Definitely not enough to be worth being bitten by a dog!

As a closet idealist, I would love to believe that the market value of my time will grow to reflect my accumulated knowledge and wisdom.

But it doesn’t always.

The reality is that the forces of supply and demand have had a much greater say in determining the market value of my time. 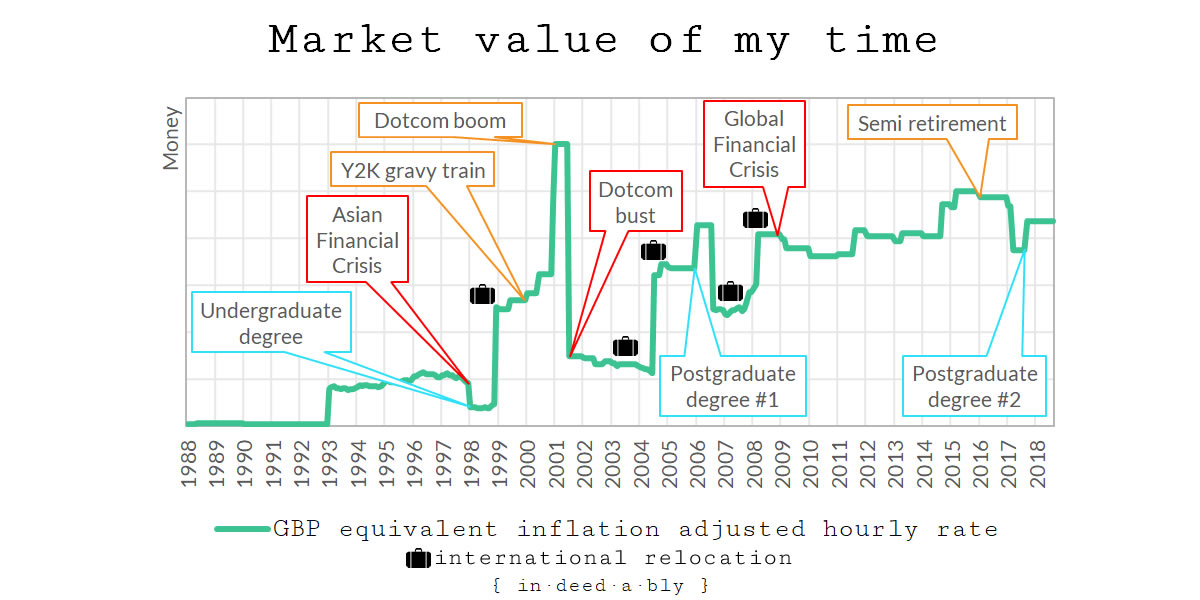 Market value of an hour of my time.

The goal should always to be positioning yourself to acquire those skills that will soon be in great demand, while concurrently earning a good living. There is a lot of luck involved in getting this right however, it is very much an art rather than a science.

Possessing rare skills that are required by an in-demand niche is a great way to ride the gravy train.

Unfortunately, in-demand skills will inevitably fall out of fashion. Telegraph operators were highly paid and in great demand towards the end of the 19th century. You don’t see too many job adverts for them these days.

Possess commodity skills in a niche that has declining relevance? Expect to see your market value fall.

There is a certain breed in the city of London, a tribe of 50+-year-old white male commuters in grey suits who reek of quiet desperation. They bounce from one legacy support programmer role to the next, fearful that the music will stop and leave them without a chair before they reach retirement age.

Too old/institutionalised/lazy/slow to learn the skills required to remain relevant. Too broke to step away from the tools and take the risk of pursuing alternative career options.

Many an interviewer are fearful of these poor wretches, in part because they can see their own potential futures playing out before their eyes, like Dickens’ ghost of Christmas future.

Adapt to remain useful, or fade away into irrelevance. This is a brutal lesson those plying their trade in IT must learn early on to survive. Needing to re-skill every 3-5 years is not unusual.

Structural and technical redundancy don’t care what we believe our time should be worth. It doesn’t matter how much hard-won experience we may have gained doing something, if nobody will pay for that something to be done any longer.

I believe that the fastest route towards having control over your time is by investing in yourself.

It is much easier to save a high proportion of your income when your income itself is high, there is a reason so many early retirement evangelists have a white collar or technical background.

The surest way to attain that high income is to possess in-demand skills and experience.

Education increases earnings… to a point

The field of study matters less than you may expect, there are many in the junior cannon fodder ranks of management consulting who possess liberal arts backgrounds.

An important caveat however: there is a limit to how much investing in ourselves makes sense.

Postgraduate qualifications may increase your marketability, though depending on your industry this is far from certain.

Tough questions should be asked about Return On Investment, both in terms of your money and your time, before undertaking further study. An MBA obtained from an also-ran business school may as well have been found inside a cornflakes packet for all the value it will add to your earnings potential.

A PhD may earn more than somebody holding a masters in the same discipline. Holding two masters degrees is unlikely to earn you double what somebody with a single masters degree makes.

Lies we tell our children

We sell our children the myth that they can achieve anything their heart desires, providing they work hard enough for it.

The reality is this simply is not true.

The vast majority of us would never be competent to run Berkshire Hathaway. Or win a tennis match against Serena Williams. Or successfully lead the United Nations. Many incumbents of senior management positions aren’t competent either, as they so frequently demonstrate!

Truth is some people simply aren’t capable of being more than a dental hygienist, a childcare worker, a security guard, or a barista. All these are noble professions, but unfortunately none are well-remunerated.

Better to be good than lucky

Looking at my own 30-year earnings history, I think my father was right when he said: “It is better to be good than lucky, but sometimes being lucky is enough”.

It is better to be good than lucky, but sometimes being lucky is enough.

Some of my increase in earnings has been down to my experience, knowledge, skill and wisdom.

However if I’m brutally honest: much of it has been down to putting myself in the right place at the right time with the right skills.