When I was formulating my own financial plan, I embraced this concept.

I sought to establish a diverse set of sustainable investment income streams.

My goal was to gradually buy back the time I would otherwise be selling in return for wages or salary. I would finance the purchase using the “passive” cash flow that my investments generated.

It has been a slow and steady process. Eventually the majority of my living costs are funded by investment income.

Once I was satisfied this arrangement was sustainable, I opted to scale back my work commitments in favour of spending more time with my kids and investing my time in enjoyable pursuits.

How do you eat an elephant? One bite at a time.

This is another ancient proverb people have repeated for as long as there have been elephants. The idea is that a large task can be accomplished by breaking it down into smaller, more manageable tasks that are then completed one at a time.

This concept could be used to describe a retirement funding method that relies upon the retiree regularly selling off small portions of their capital. Investment income generated by the retiree’s capital gets reinvested.

Much has been written about this approach to funding retirement, and it has become a favourite of the financial independence and early retirement proponents.

If each bite was smaller than the investment income generated by the retiree’s capital, then this approach is not fundamentally different from the fishing approach described above.

What happens if the bite-size exceeds the investment income generated? Just like the elephant, eventually the retiree’s capital may be consumed entirely.

The larger or more frequent the bite, the sooner the meal will end.

income is not taxed equally

One of the main differences between the two approaches is how they are taxed.

If you own an investment that kicks off some income in the form of dividends, interest, rent or royalties then in principle you are supposed to pay tax on that income.

It would be fair to describe the United Kingdom tax setup as a mess, with rates and allowances varying by asset class, phase of the moon, age of the taxpayer, and how good a tax accountant they can afford.

Capital gains incur the lowest rates, taxed at roughly half the rate of wages and salaries. Unfortunately gains on rental properties incur a further 8% tax, as part of some misguided social policy exercise.

Next comes dividends. These are taxed at roughly 81% the rate of wages and salaries. The company issuing the dividend has already paid 19% corporations tax on the profits being distributed.

You can’t escape your obligation to pay tax on those dividends by purchasing accumulation funds. The reinvested dividends are deemed “notional distributions”. The tax authorities don’t care what you did with the dividends, they want their cut regardless!

The ability to offset financing costs against rental income is being phased out. Given finance costs are often the largest cost associated with operating an investment property, this change results in the basis of taxation for rental income becoming more turnover than profit based.

Interest is taxed at the taxpayer’s highest marginal rate.

Royalties are also taxed at the taxpayer’s highest marginal tax rate. In addition to this many authors/composers/patent holders/etc may also find themselves classified as being self-employed and needing to pay either Class 2 or Class 4 national insurance contributions (depending on profit levels). This increases the rate of tax owed on royalty income by up to 9%.

In addition to revenue raising, tax policy is used by governments to encourage or dissuade the population from engaging in certain behaviours.

In this case the government appears to be encouraging people to eat their elephant via the favourable tax treatment of capital gains. I find this a curious choice, given recurring investment income streams (i.e. learning to fish) create recurring tax revenue streams for the government! 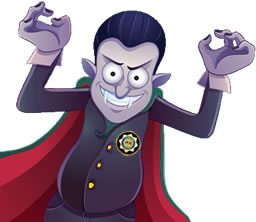 Holding investments in taxable accounts can be expensive. After-tax money is invested. Any income generated by those investments along the way is then subject to taxes discussed above. When the investment is eventually sold any appreciation in value also gets taxed.

Tax avoidance for fun and profit

The tax authorities incentivise investing for the long-term, via the use of tax-advantaged accounts like ISAs and pensions.

These two types of accounts are taxed in opposite directions, yet providing the tax rate is the same it conceptually makes no difference whether you pay tax on the way in or on the way out.

ISAs receive after-tax money in. Any* income or capital gains generated within the wrapper are entirely tax-free, for life (or until the government changes the rules). Funds withdrawn from the wrapper are also tax-free.

* investments domiciled outside of the UK may incur taxes at source, for example withholding taxes.

This can be illustrated by comparing the charts below:

The power of compounding means the longer an investor leaves their funds within a tax-advantaged wrapper, the greater the accumulated benefits of avoiding capital gains tax.

There is a potential tax arbitrage opportunity for pension holders. If the retiree finds themselves in a lower tax bracket in retirement than while they were working, their pension withdrawals would be taxed at this low rate.

Retirees are not required to pay National Insurance on pension distributions.

How long is too long?

Another consideration is longevity.

How long does the capital need to last? For each phase of the retiree’s life, what portion of their lifestyle costs do they require their capital to fund? 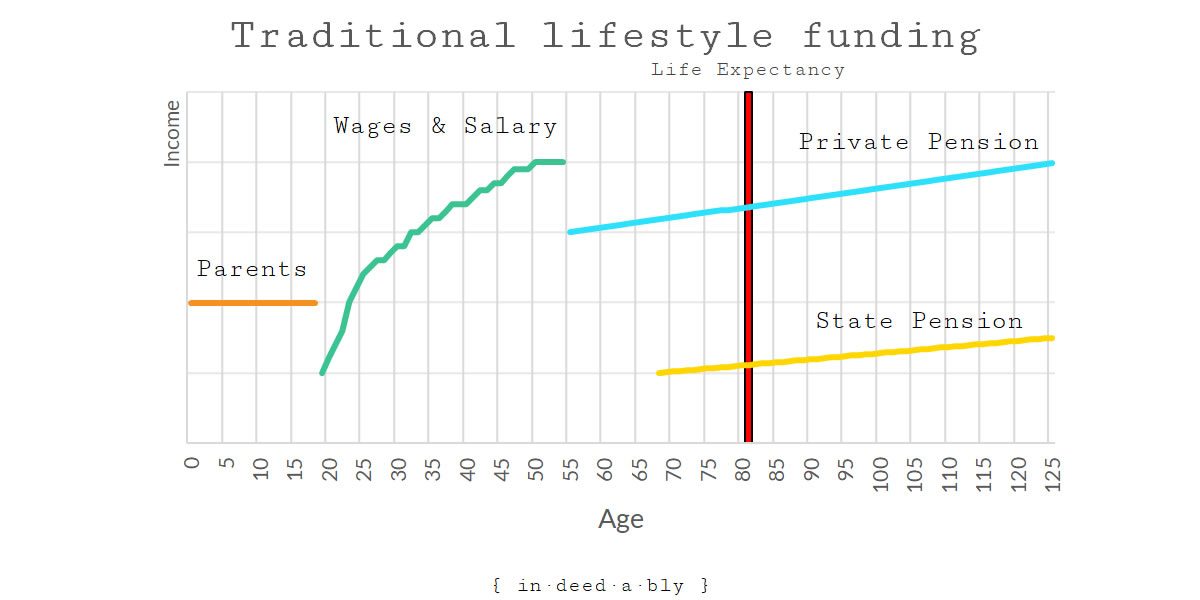 The most tax efficient option is to maximise the use of pensions. Personal finance blogs and podcasts frequently espouse the virtues of the “free money” associated with employer pension contribution matches and tax relief.

However the tax tail should not wag the investment dog.

While tax efficient, private pensions funds cannot be accessed until the pensioner reaches the age of 55.

For government pensions, people need to wait even longer. The exact age varies somewhere between 65 and 68, depending on when the pension was born and the whims of the government. There is a high likelihood that state pension age will increase further.

Therefore anyone wishing to partially or fully retire earlier than age 55 needs to make alternative arrangements for supporting themselves.

A lucky few may enjoy the Hollywood clichés, such as: winning the lottery, receiving a large inheritance, or relying on the benevolence of a rich spouse/relative.

The rest of us will need to apply one or both of the “learning to fish” and “eating the elephant” approaches to cover the gap between their income and lifestyle costs.

Those alternative arrangements may need to continue well past retirement age, if the retiree’s pension income proves to be inadequate to cover their lifestyle costs.

Are you an outlier?

Few of us have an accurate idea of how long we will live.

She would have been receiving her personal pension for 67 years.

She would have been receiving her state pension for 54 years.

If those pensions were insufficient to cover her lifestyle costs, then her net worth would have needed to make up the shortfall for 67 years… longer if she retired early!

With the benefit of hindsight, the “eat the elephant” approach would have required Ms Calment to take small bites and chew slowly. If she didn’t then she would likely have run out of capital decades before she ran out of time.

Obviously Ms Calment was an outlier. She lived long. She smoked for 96 years. Every year she ate her own body weight in chocolate several times over.

However as she progressed through her life she could not have known she was an outlier.

The risk of outliving my capital made me uncomfortable, particularly if that were to happen once I was too much of an old and frail dinosaur to meaningfully do anything about it.

I wanted to buy back control of the time I had invested in earning a living.

There were several possible ways that my investment portfolio could help achieve this goal.

I was unwilling to wait until the government or a pension provider gave me permission to stop working. I had things I wanted to do, and places I wanted to go, that full time work was getting in the way of!

My wages could be replaced with sustainable cash flows, buying back the time I would otherwise spend working.

I began establishing a diverse collection of passive income streams. Once they covered the majority of my lifestyle costs I gradually began buying back control of my time. 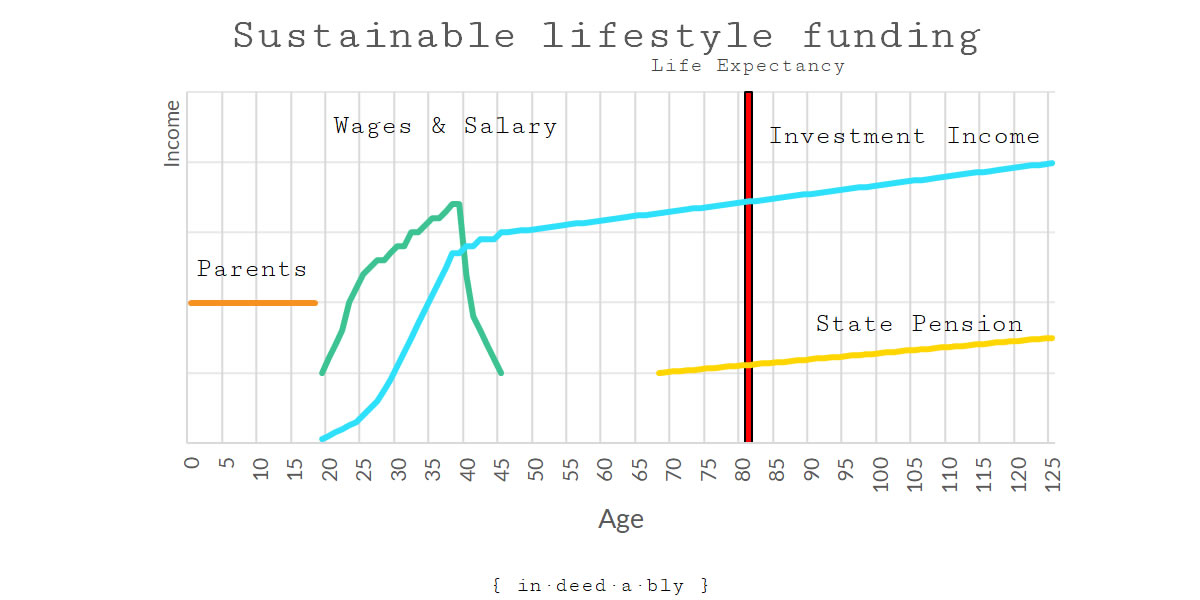 An alternative model: Buy back control of time using investment income, then enjoy that time today.

It occurred to me that if done correctly these passive income streams should be sustainable indefinitely. It would require a bit longer to achieve than eating the elephant, but the risk of outliving my capital would be mitigated.

I also realised that I could start enjoying the portion of my time that I did already have control of immediately.

The approach probably isn’t for everyone, but it works for me.