The rules for the birdman rally were simple:

Leap off a 10-metre high tower on the edge of the lake, and fly at least 50 metres before touching the water to win $20,000. Competitors could use any props, costumes or vehicles they liked… providing they were both homemade and non-motorised.

Many competitors didn’t stand a chance, dressing up in chicken costumes and (mostly) plummeting into the lake, much to the amusement of the crowd.

One entrant drank 42 cases of beer, duct taped the empty boxes together into the rough shape of a Volkswagon Beetle, and attempted to “drive” it over the line. It is safe to say he wasn’t feeling any pain when he landed with an almighty bellyflop! 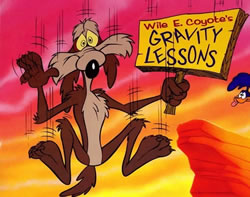 Some competitors took the competition more seriously. They applied engineering principles and industrial design to their crafts, resulting in some ACME specials that would have made Wile E Coyote proud.

It took six years for the first successful birdman to cover the distance, flying a homemade glider constructed from fibreglass and foam. The winner returned the following year and won again, giving the prize to his mother.

Unfortunately that was the last time the event was held, the killjoys and exorbitant public liability insurance premiums conspired to put an end to it.

How much is enough?

While the birdman rally was a lot of fun to watch, it also provided some useful lessons in “enough”.

To win, a competitor had to fly at least 50 metres.

The drunken entrant who donned the pink tutu and fairy wings before making the leap didn’t make the distance. They barely made the water. They did not do enough.

David Mayman has built an awesome jetpack that can fly him across the Thames without getting his feet wet.

While very cool this solution was over-engineered for the birdman rally, a case of doing more than enough. 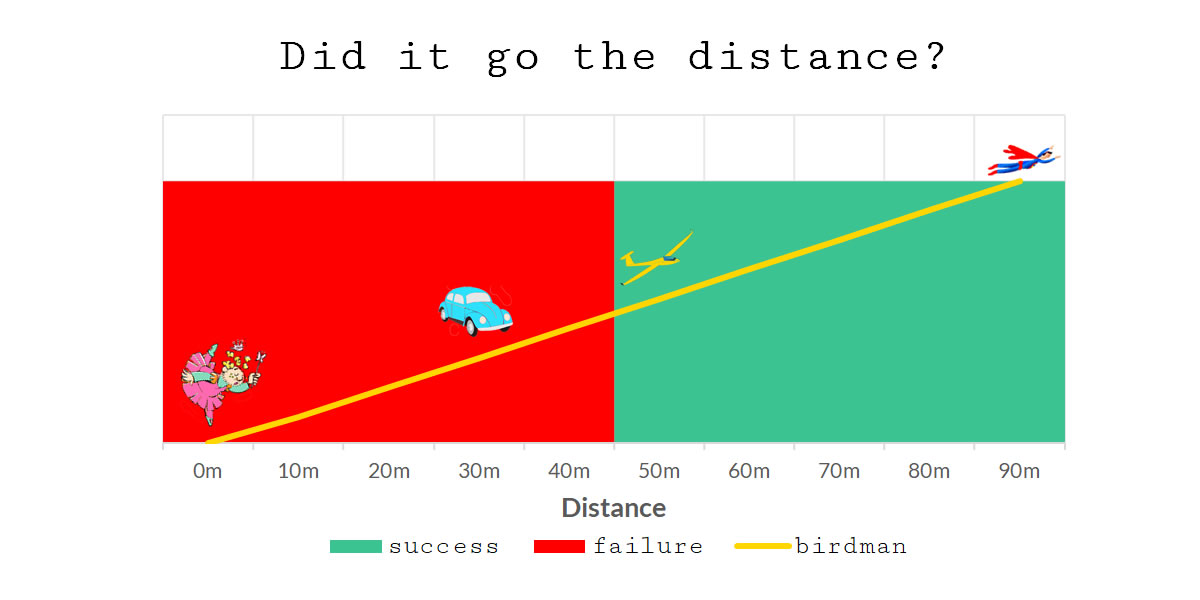 If a competitor invested no money in their entry, like the drunk fairy, and yet managed to win the event then they would have earned a $20,000 profit for their effort.

The cardboard Volkswagon entry required the investment of 42 cases of beer. If commitment to the cause counted for anything, this competitor would have earned a lesser profit to offset the massive hangover.

Each birdman had to make a decision about how much investment was enough to create a winning entry that could fly the 50 metres.

In each case there was a trade-off between the level of investment required, and the level of return achieved. How much was “enough”? 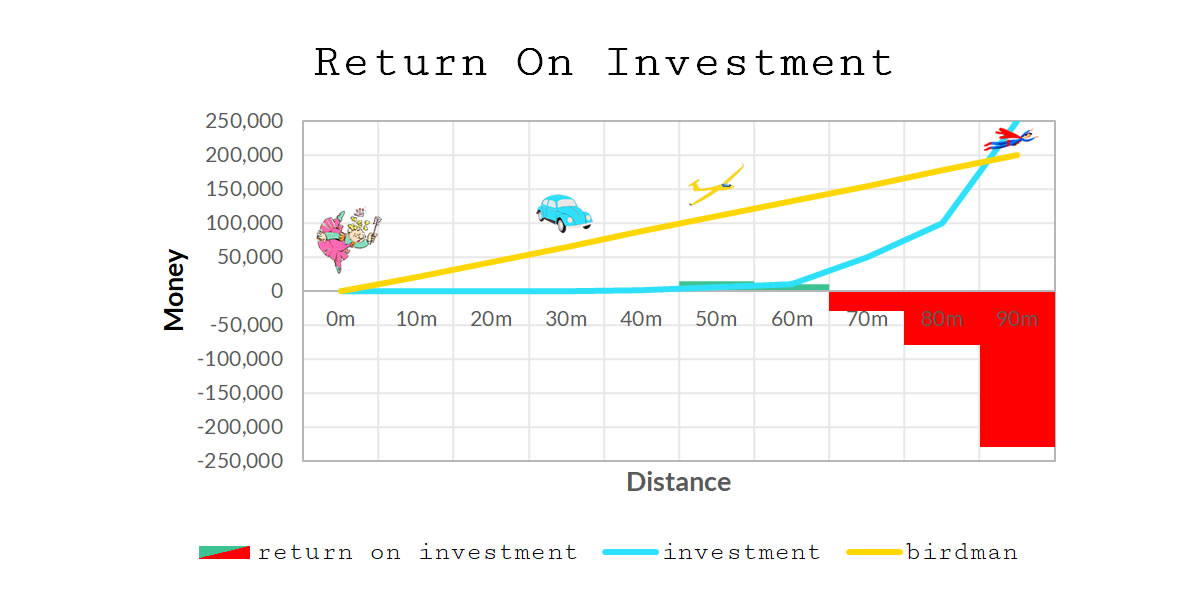 The value of time

Not all investments are monetary ones. Time is a scarce commodity. Every hour a competitor invested in constructing their entry was an hour not spent earning a living, or playing with their kids, or taking the dog for a walk.

Placing a premium on our time is a great way to help prioritise things, so that we get the important stuff done. It also helps avoid losing vast amounts of time to busy work and noise.

Once we appreciate that our time has a value, we should add the time investment to the monetary investment on the birdman entry.

More to life than money

However there are more important things in life than money, and the time invested in a pleasurable hobby or fun diversion need not command the same premium that time spent on an unenjoyable activity like ironing or cleaning up after a nappy containment issue. 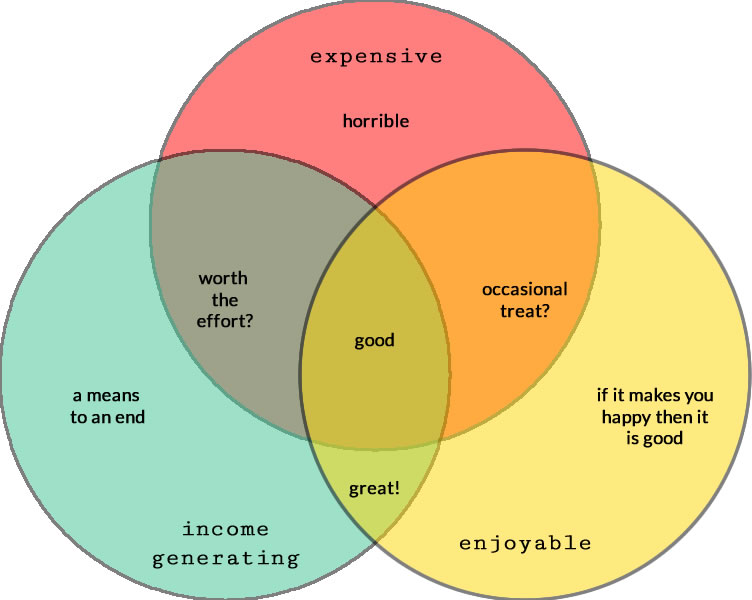 For my time prioritisation decisions a task either needs to generate income, provide enjoyment, or preferably both. The more enjoyment I derive from doing something, the less financially rewarding it needs to be.

What about those tasks that provide no enjoyment, and generate no income? Wherever practicable, simply don’t do them!

Now how much was “enough”?

Of course in addition to the financial prize, there was the kudos and adoration that came from winning the birdman rally. This may lead to celebrity, endorsements, or potentially open the doors to even bigger and better challenges in the future.

The first (and only) successful birdman entered the competition six times before he made the distance. Each entry required investment and effort, learning and refining the design until it became good enough.

It is unlikely the $20,000 victory prize would have covered all of that cumulative investment.

However the competitor was an engineer, who took the prize money and used it to finance his migration to United States where he went on to establish a successful engineering firm.

How many potential clients spoke to him initially because they were curious about his birdman rally fame? It is impossible to quantify, but no doubt he would have had some entertaining stories that helped open doors.

Enough is subjective, and different for everyone

As you can see “enough” is a subjective judgement, with each person arriving at a different answer that will hopefully be right for them.

In the case of the birdman rally, an entrant like the drunk fairy, who just wanted to have a laugh and entertain the crowd achieved enough.

A serious competitor who was determined to make the distance, but failed to, did not achieve enough to be content with their efforts. Their investment or execution proved inadequate, unwise, or some combination of the two.

A winning entrant, with the goal of just making the distance for less than the prize money, achieved enough the moment they cleared the 50-metre mark.

Those other successful birdmen who invested more than the value of the prize, or who failed to realise the fringe benefits they expected to be associated with a win (fame, endorsements, etc) would be left wishing for more.

retirees are the birdmen of the financial world

After reading much about retirement planning lately, I am left with the conclusion it is remarkably similar to the birdman rally.

There are a plenty of drunken fairies and cardboard Volkswagons drivers, who haven’t invested enough but hope for miracles. They are encouraged to jump by a willing crowd, who are as much seeking entertainment as offering support.

Gurus and shysters, the majority of whom have never entered the competition themselves, quite happily offer to sell “expert” advice to the actual competitors on how best to construct a craft that will fly the distance.

The crowd laughs and cheers before turning their attention to the next entrant, while the bedraggled birdman slinks away alone to ponder what might have been.

Next there are the serious inventors, industrial designers, and engineers. They have devoted an unhealthy amount of time planning and building their flying machines. On paper they should work, capable of going the distance and beyond.

These magnificent creations are often long delayed. Time and again they have appeared almost ready, only for the birdman to think of some detail they may have overlooked.

When the planning is done, it is time to execute

Eventually the birdman declares “enough”. It is time to take the leap.

Carefully climbing the tower, to avoid doing anything that will damage their vehicle.

They step up to the edge of the platform.

Taking a deep breath, they close their eyes, and leap into the unknown!

Flying, or falling with style?

Some experience turbulence, and plunge to an early splash landing. Failure!

Some have made mistakes in their design, crashing perilously into the lake. Failure!

Some are blown off course, veering away in an unexpected direction. Failure? I’m not so sure, it depends on how things turn out.

Some come down as designed, precisely on the 50-metre mark. Success?

They achieved their initial goal and won the prize! However the 50-metre mark is in the middle of the lake, and the competitor still gets soaked.

They hadn’t given any thought to what happens after the flight, and now need rescuing or risk drowning. If retirement were a birdman rally this could be considered a qualified success at best, close but not really “enough“.

Some fly over the 50-metre mark, and glide on to a graceful landing back on dry land. Successful flight, successful landing, won the prize, and no need for an emergency rescue. Winning! They definitely have “enough“!

Finally the last group fly out past the 50-metre mark, then continue off into the sunset for adventures beyond.

Their well-designed creation is provably up to this job and more than capable of handling whatever uncertainties the next adventure may hold. For mine, these are the true victors. That is retirement without financial worry, and never needing to worry about having “enough” again.

How much is your “enough“?

If the birdman rally was your retirement funding, which machine would you prefer to fly?

What would constitute “enough” for you? Just turning up on the day? Flying 1 metre? 5 metres? 50 metres? Back to dry land? Or being able to continue flying forever?