Fritz idly poked the campfire with a twig, sending an angry cascade of embers soaring into the clear night sky. He was bored, a victim of the hurry up and wait.

Tonight he sat alone, in a place far from home. Outside a town with a name he didn’t know. In a land he had never planned on visiting. Idle moments like this one spent imagining the future. Hopes and dreams running wild.

Somewhere back home Fritz’s parents would be wondering how he was.

They had invested years of love, sacrifice and toil raising him.

Providing a safe warm place for him to spend his 6,500+ nights of childhood sleeping.

Ensuring he grew up big and strong, by having enough to eat at each of his 19,000+ meals.

Nursing him through illness and nightmares.

Educating his mind with all the things they thought a young man needed to know.

Preparing him to enjoy every happiness and success, as he looked forward to a long life ahead.

Then, in the blink of an eye, Fritz looked forward no longer.

His lifeless body toppled over. Hopes and dreams extinguished.

His parent’s efforts in vain. Their investment irrecoverably lost.

I slowly released the breath I had been holding. Then released the trigger I had gently squeezed moments earlier.

My observations of Fritz had been made from a couple of hundred metres away, via the crosshairs of a telescopic rifle sight. My imagination had subconsciously supplied the narrative.

I sighed. Sometimes I think too much.

Deciding that was enough Xbox for today, I switched off the television and went outside.

Sometimes I wonder if there is a danger that the things we use for an escape can become too real. The distinction between fantasy and reality blurred. Or lost altogether.

The internet is built on selling fantasy and escape. Fulfilling the former. Promising the latter.

The Financial Independence blogosphere, in particular, is heavily read by dreamers.

Many of these blogs discuss approaches that are relatively tame and unimaginative.

This isn’t a bad approach. It offers a reassuring sense of inevitability to the outcome.

American President John F. Kennedy was fond of the saying “a rising tide lifts all the boats”.

Low-cost index trackers personify this approach. Investors backing all the horses in the race, rather than trying to anticipate the victor.

Occasionally there will be a run-away winner.

Some will undoubtedly crash and burn spectacularly.

Most will underwhelm, taking a long time to do very little.

Investors following this approach have enjoyed more small gains than small losses. In aggregate. Over the long run. Most of the time. In some markets. There is hope, but no guarantees.

As my old rugby coach used to say, “little steps, little steps” is the way to win a scrum.

Every now and again I discover a blogger who is not content to wait for the rising tide.

They proactively create value and generate wealth. Common examples are business ownership, real estate, or the often shady “business of blogging”. Most of these turn out to be mere “side hustle” dabblers, pretending to be entrepreneurs, but only playing for pocket change.

Very occasionally one of those approaches appears to make sense, pass the smell test, and withstand cursory initial scrutiny.

One such approach comes from the anonymous blogger who writes at FIRE v London.

FvL swims in the deep end of the personal finance pool. He occasionally writes about fascinating challenges or dilemmas that few of us are likely to encounter first hand. Angel investing. Margin lending. Private banking.

In 2015 FvL decided to buy his dream house, in one of the nicer parts of North London.

At the time London’s property market was decidedly frothy. A long-running housing boom had peaked, and the slow decline that continues to this day was just beginning.

Sealed bids led to inflated prices, with lenders torpedoing only the most ridiculous of offers.

Sellers insisted on cash-only buyers, to avoid the house of cards that is a property chain.

Not content with just these usual challenges, FvL turned up the difficulty level up to extreme by financing the purchase using margin lending, as opposed to a traditional mortgage.

To explore how this arrangement operates, I have extracted some basic information from FvL’s narrative, then illustrated with publicly verifiable datasets. Any errors, gaps, or omissions are my own.

A margin loan works in a similar manner to an open-ended interest-only mortgage, secured by stocks and bonds rather than property. It has the added risk of a margin call, should the value of assets securing the loan breach the agreed loan-to-valuation threshold of the margin facility.

In FvL’s case, that loan-to-valuation ratio was approximately 50%. The chart below illustrates how that margin facility would have played out if it were secured by an S&P500 index tracker. 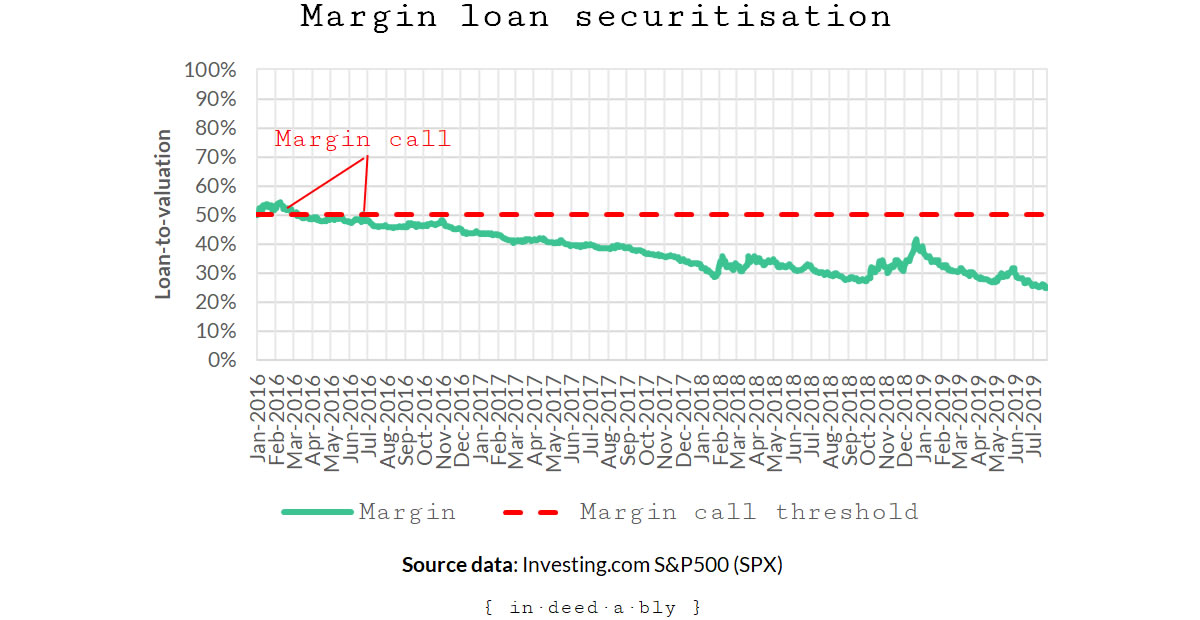 The margin loan interest rate was roughly the base rate + 1%. That was materially less than an equivalent average fixed interest mortgage rate, especially once fees and charges are factored in.

It was also effectively self-funding, as the dividend yield of a low-cost index tracker exceeded the margin rate. 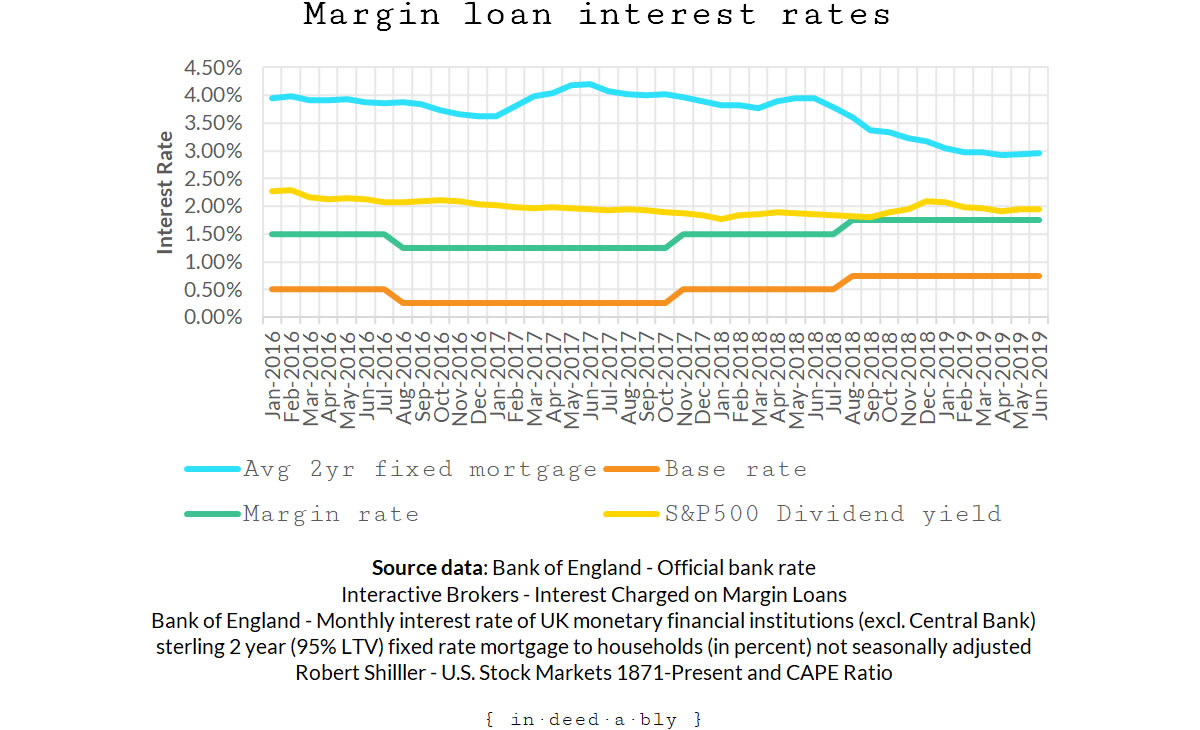 This paints an intriguing picture.

An asset, not an investment

The “an asset, not an investment” label applied to owner-occupied property largely stems from the fact that your own home contains often large amounts of “trapped” equity, while typically not generating any income. The purchase decision is often a case of heart leading head.

The income argument can be countered by looking at the opportunity cost. Someone who owns their home outright doesn’t need to pay rent to a landlord or interest to a mortgage lender. That cashflow is then freed up to potentially invest elsewhere.

The opportunity cost aspect of “trapped” equity is harder to argue with.

In many locales, stock market returns have exceeded the capital appreciation experienced by real estate. Therefore selling stocks to purchase a dream home has been a case of exchanging a goose that lays golden eggs for the happy feeling sometimes gained from being king of the castle.

“There is more to life than money!” said many folks throughout the ages. All of whom had money.

The traditional approach would have been to sell down investments to purchase the dream house. The chart below uses the average detached house price in Camden as a proxy to illustrate how this plays out.

FvL’s scenario potentially provides a method to experience the best of both worlds. 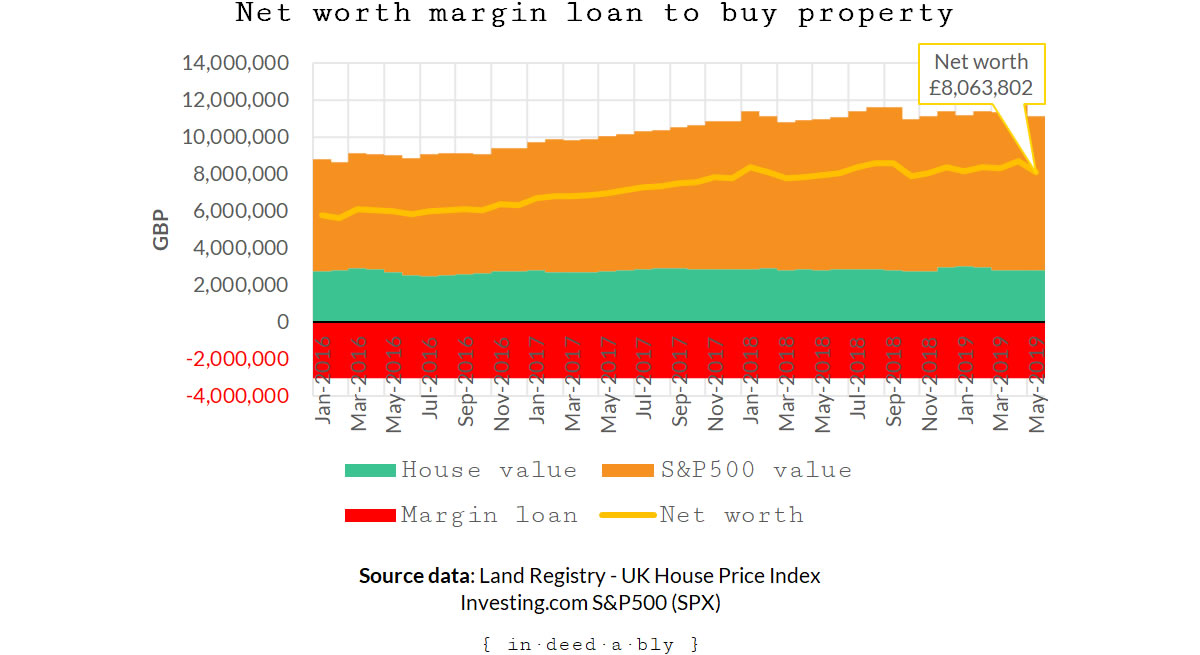 The resulting differences in net worth are significant.

This approach is not without risk. A blog reader who blindly copies FvL’s margin lending idea could unexpectedly find themselves blown up or bankrupted by a plunge in stock prices. Just like Fritz, their hopes and dreams living or dying based upon the decisions of others.

A significant market correction could initiate an urgent scrounging behind couch cushions for cash or additional security to meet a margin call.

However, if that additional cash or security was readily accessible then this would simply be an inconvenience. If a dream home formed part of a well balanced and diversified portfolio then a margin call should not be financially life-threatening.

I have long used lines of credit to finance investment property purchases. Inflation erodes the principal over the loan term. Good lenders let borrowers make voluntary capital repayments whenever they like, without penalty.

This provides the borrower with the flexibility to repay as much or little of their principal as their circumstances allow. The borrower can also redraw previously repaid principal amounts if desired.

The only constraint on lines of credit is that the loan balance does not exceed the loan limit.

A margin lending facility works in a similar manner, with the additional caveat that the security for the margin loan is constantly marked to market prices. Breach the loan-to-value ratio and receive a margin call, or have a position closed out entirely, to remedy the shortfall.

I was intrigued by FvL’s approach of using this approach to purchase an owner-occupied property. In the past my property financing number-crunching had always been driven by cashflow: could a well-located property serve as a cash flow positive self-financing investment?

Studying FvL’s approach reframed that question: could the opportunity cost of purchasing a dream home be sufficiently offset via a margin loan to tick both the financial and lifestyle boxes?

His experience would suggest that it just might be.

Margin lending can be as simple or complicated as an investor chooses to make it.

FvL operated a plain vanilla arrangement, where he borrowed and invested in the same currency. Simply put, he matched the currency of the margin interest charges to the dividend currency.

A more adventurous variant might involve introducing foreign exchange risk into the equation, borrowing in one currency and investing in another.

This might make sense if the borrower believed they could anticipate the general direction of currency movements during their investment timescale.

For example, commentators are forecasting a sustained weakening of the British Pound post-Brexit.

Or the US stock market may continue its long term outperformance of the UK market.

Or quite possibly both.

Gambling on foreign exchange movements is fraught with peril. Yet it can be remarkably lucrative.

20+ years ago there were urban legends aplenty about antipodeans who arrived in London on working holiday visas, worked hard while living cheap, and squirrelled away cash at a savings rate that would be the envy of even the most extreme FIRE seeker.

They then returned home and paid cash for a house.

The secret sauce wasn’t the earning of vast sums as a freelancer.

Nor was it working through some dodgy offshore tax minimisation arrangement.

It was the windfall gained when converting those savings denominated in a (then) strong GBP into a (then) much weaker home currency. 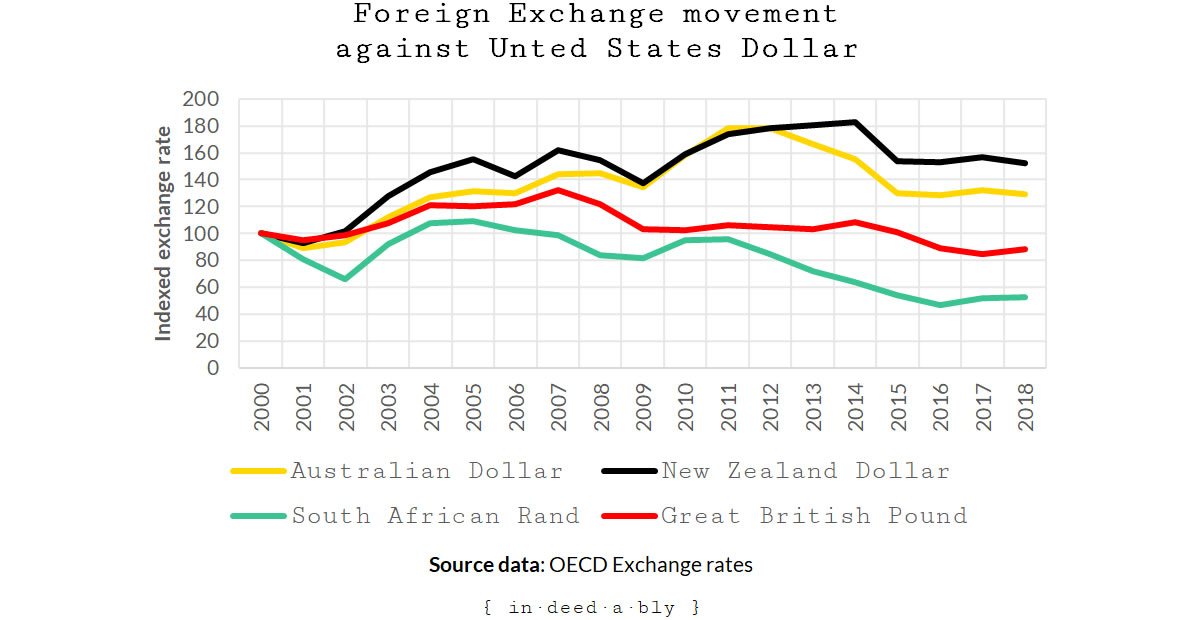 Introducing FX risk into the margin lending equation is not for the faint of heart.

An investor who was able to correctly predict the direction of FX rate movement, has the ability to significantly deflate the value of their loan.

For example, I was once able to snipe FX rates during an investment property purchase, saving more than £55,000 in the process. In my case this was down to good luck rather than good management, but the savings were just as real.

Get this wrong however, and the investor has an even greater chance of blowing themselves up.

FvL recently declared victory on his approach of using margin lending to purchase his dream house.

In just four years his net worth had recovered to pre-property purchase levels. This is a remarkable feat, given the stamp duty costs on the purchase were an eye-watering 14x the United Kingdom median household disposable income. Ouch!

The sooner stamp duty is abolished and replaced with an ongoing value-based land tax, the better.

I’m pleased FvL’s adventures into margin lending had a happy ending, and grateful that he documented his thought process throughout the journey on his blog.

In addition to providing financial voyeurs with a vicarious thrill, FvL’s case study gives some fascinating insights into the potential usage of margin lending to finance owner occupied property.

Update: After reading this post and discovering he is now an internet celebrity, FvL kindly provided some clarifications: