“I’ve got t’ best accountant in t’ world! ‘e knows all t’ rules, keeps us out o’ trouble, ‘n dunt let us get away wi’ any funny business” declared the very drunk freelancer from across the table.

The rest of us exchanged puzzled glances and attempted to translate.

I studied English for 13 years while at school. What I was taught broadly resembled the way many people in London speak… but the further north of the M25 or west past Oxford a person is from, the harder they are to comprehend. One of the many unexpected challenges of being a migrant!

It turned out the freelancer meant he had a very conservative accountant, who instructed clients to follow the spirit of the tax rules. No writing off big-screen televisions as business expenses here!

The drunk freelancer was boasting that his contract was worth nearly £200,000 a year.

He thought he was rich.

Which was a good thing, because he had insisted on taking the rest of us “colonials, convicts and conquistadors” out for a drink and picking up the tab.

I doubt I would have been alone in admitting it was free beer rather than his insufferable company that had enticed me out that evening!

Freelancers and consultants develop a habit of running the numbers whenever they hear a day rate. Opportunities tend to crop up at the most unexpected moments, and managing expectations of potential new clients is an important skill.

Nobody likes teasers or time-wasters!

I quickly ran the drunk freelancer’s numbers, and established he was neither as clever or as rich as he believed himself to be.

The first chart shows the breakdown of where the drunk freelancer’s invoice amounts went. 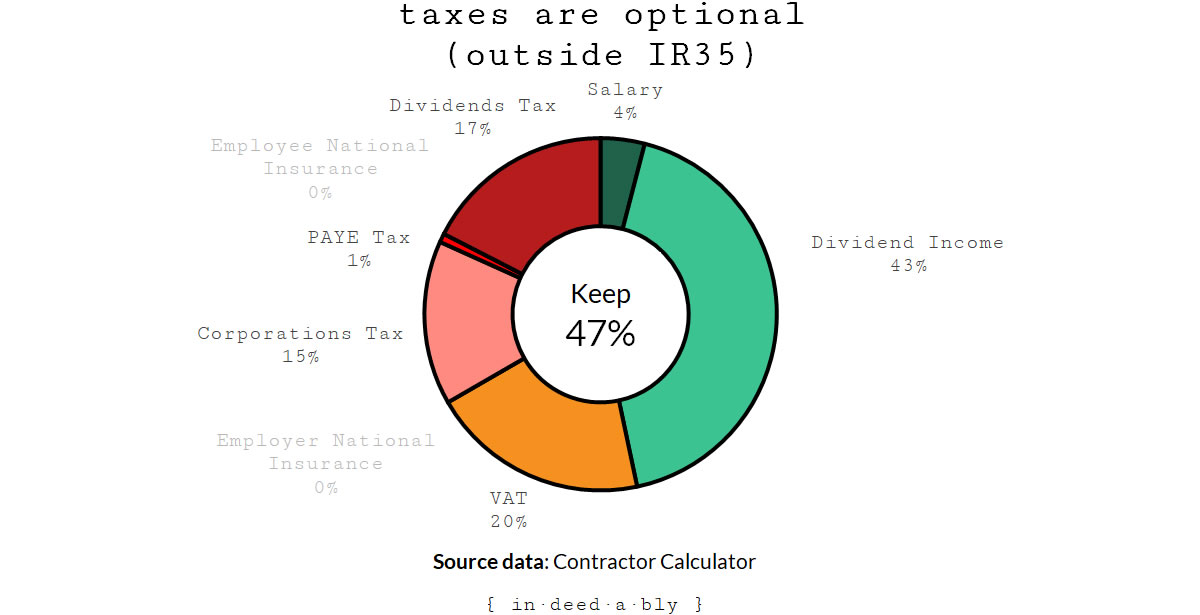 The drunk freelancer was undoubtedly doing well for himself, but the tax authorities were keeping more than half of it.

Incidentally, some years later the still drunk freelancer remained working for the same client, when the government deemed all contract workers to be “disguised employees” and therefore liable for employer payroll taxes on top of what they were already paying. 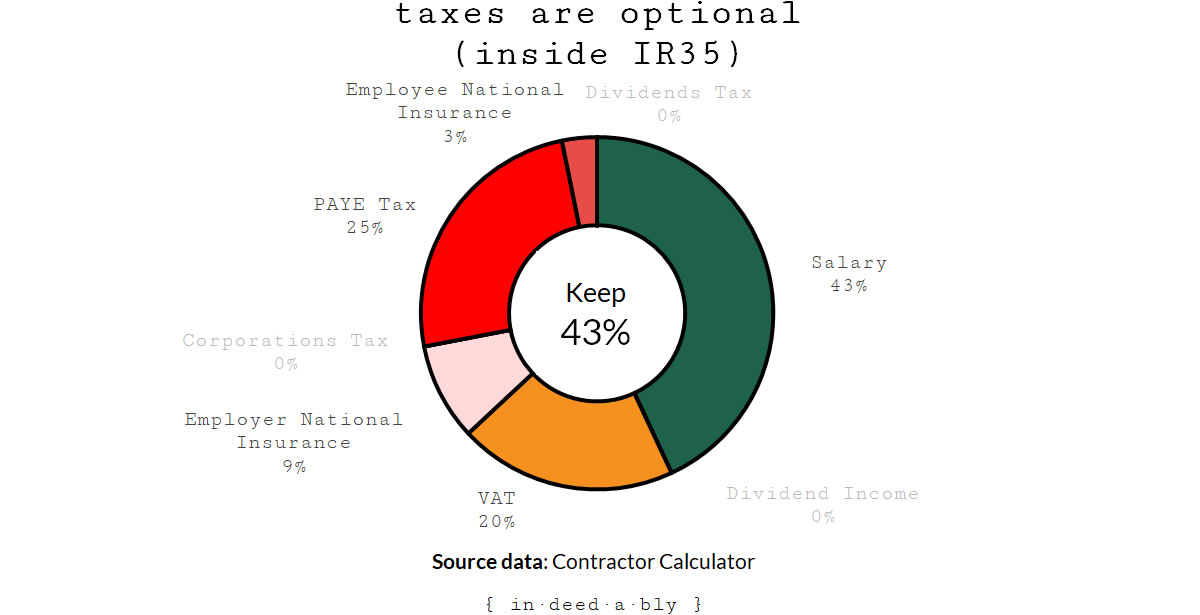 This put a further dent in the drunk freelancer’s disposable income.

Many people will tell you that the streets are paved with gold for freelancers.

Once a former permanent employee throws off the shackles of their exploitative employment overlords, and start selling their time by the hour at a rate commensurate with what their newly marketed freelance skills are really worth, they’ll be riding the gravy train to riches.

Suspend disbelief for a second, and indulge me by pretending that the drunk freelancer’s client would be willing to spend the same “cost to the business” employing him that they currently spend on his day rate + VAT. 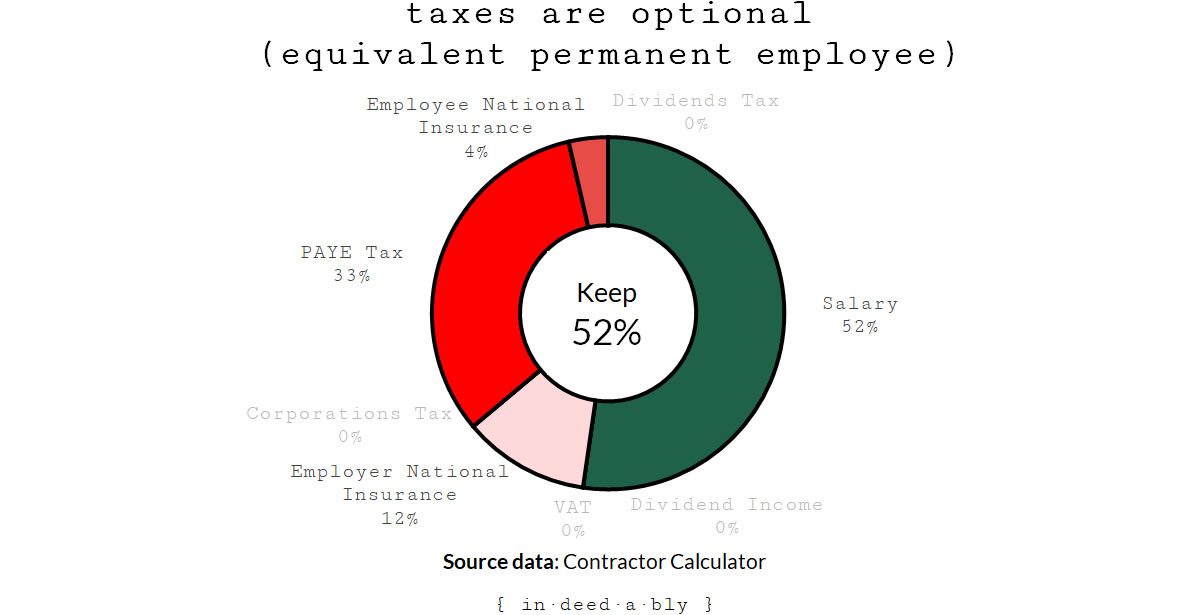 It turns out in this scenario the now ex-freelancer would actually retain a slightly higher portion of the employer spend than he does as an independent entrepreneur.

Not always… but often

In the real world however, few permanent salaries exactly equate to what a client would be willing to pay for a highly skilled interim freelancer.

At the time of our night in the pub, the market salary for the drunk freelancer’s skills was £85,000.

That is a world away from the nearly £200,000 he claimed his contract was worth! 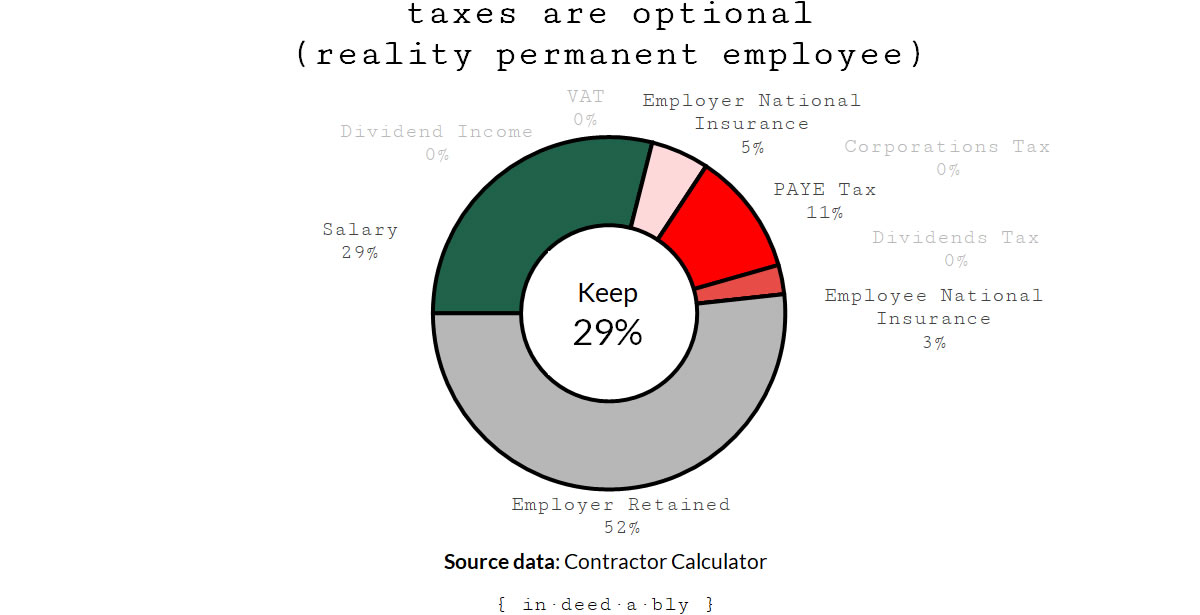 This chart demonstrates the vast difference in spending that employers might be willing to incur for an ongoing resource versus a disposable freelancer.

It is worth noting that a good employer offers many benefits that don’t show up in a base salary figure, including:

Freelancers don’t get any of those… unless they purchase them for themselves.

Which the drunk freelancer definitely did not do. He did ply the rest of us with free beers however!

Choose your own adventure

The drunk freelancer’s eyes narrowed when he spied his barely intelligible endorsement of his accountant had yielded a combination of suppressed grins, raised eyebrows and knowing glances.

“Eh? How much do you maungy bastards keep?” he demanded as he slammed his pint glass onto the table, causing the rest of our glasses to jump alarmingly.

The drunk freelancer glared at the combative Afrikaner database administrator sitting next to him.

“I don’t pay any National Insurance” he admitted. “Instead the money goes into a Channel Islands trust account, which will be refunded to me in full once I leave the UK at the end of my working holiday.”

We could see the wheels turning as he attempted to figure out the implications.

The Employee’s National Insurance tax rate was in the region of 12%. 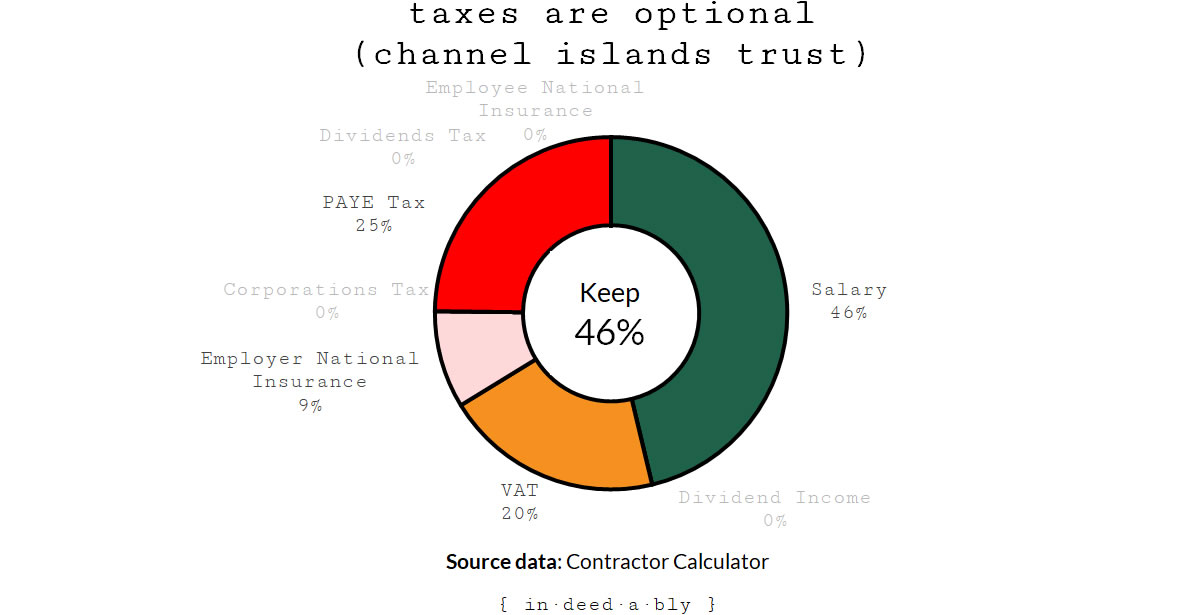 Even though the terms of the Afrikaner’s visa prohibited him from running his own business, this arrangement meant he was retaining nearly the same proportion of his invoices as the drunk freelancer.

Next the drunk freelancer turned his attention to the equally drunk Australian project manager.

“I subcontract my services via a company in Singapore, much lower corporations tax. I have to physically go there to release the money, but I transit through there anyway, on my way home each Christmas.”

It turned out the effective Corporations Tax rate in Singapore was 8.5%, at the turnover levels the drunk freelancer would generate.

No payroll taxes were due because no staff physically worked in Singapore.

No sales taxes were levied, because the company didn’t sell its services to Singaporeans.

Apparently the Project Manager’s accountant utilised some form of transfer pricing to negate any tax that would normally be due in the United Kingdom.

The arrangement was similar to that used by the likes of Amazon and Apple to transfer profits to more benevolent tax jurisdictions. 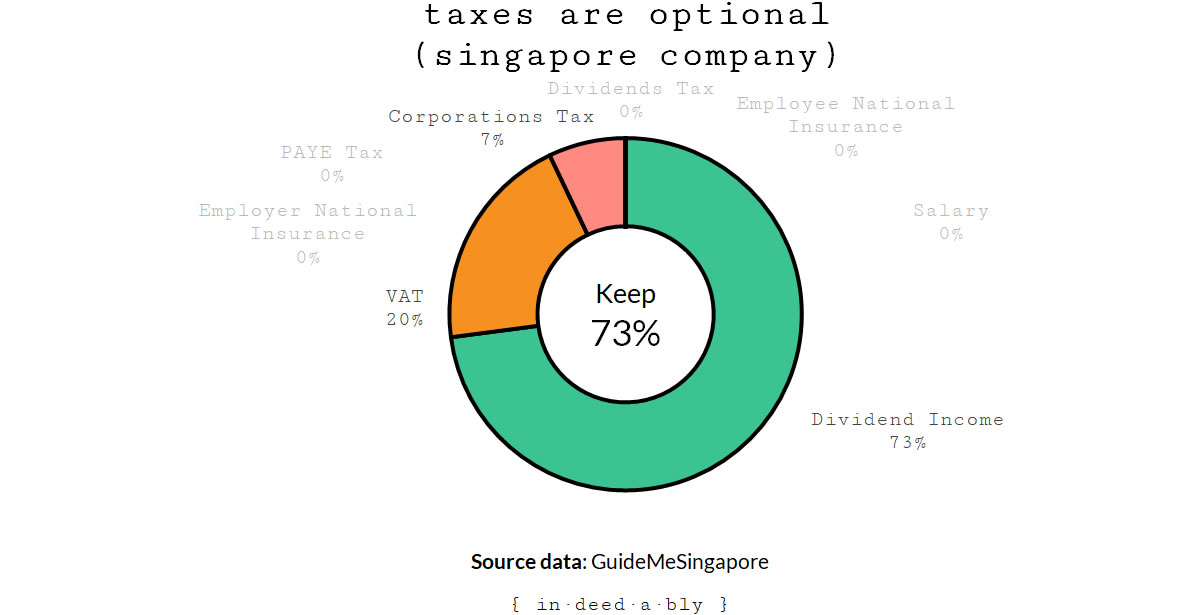 The drunk freelancer’s jaw dropped as he mentally calculated how much tax the arrangement might save.

The Afrikaner lent forward. The conversation had suddenly moved beyond mere pub talk, to something potentially useful at a later date.

The drunk freelancer’s head lolled like a punch-drunk boxer towards the curly haired Spanish developer, who was doing a masterful job of drinking the rest of us under the table.

“Gibraltar is really a part of Spain. Gibraltarians pretend this is not the case, but they are wrong.

They are a stubborn and foolish people in all things… except for one.

They have a tax-exempt non-resident limited company structure which, in return for an annual fee of just £200, incurs no corporations tax on any income generated outside of Gibraltar.”

The rest of us must have resembled a Scooby Doo cartoon, when the gang see a ghost.

“Cabrón!” swore the Project Manager, unhappy to learn his impressive income retention arrangements he been topped. 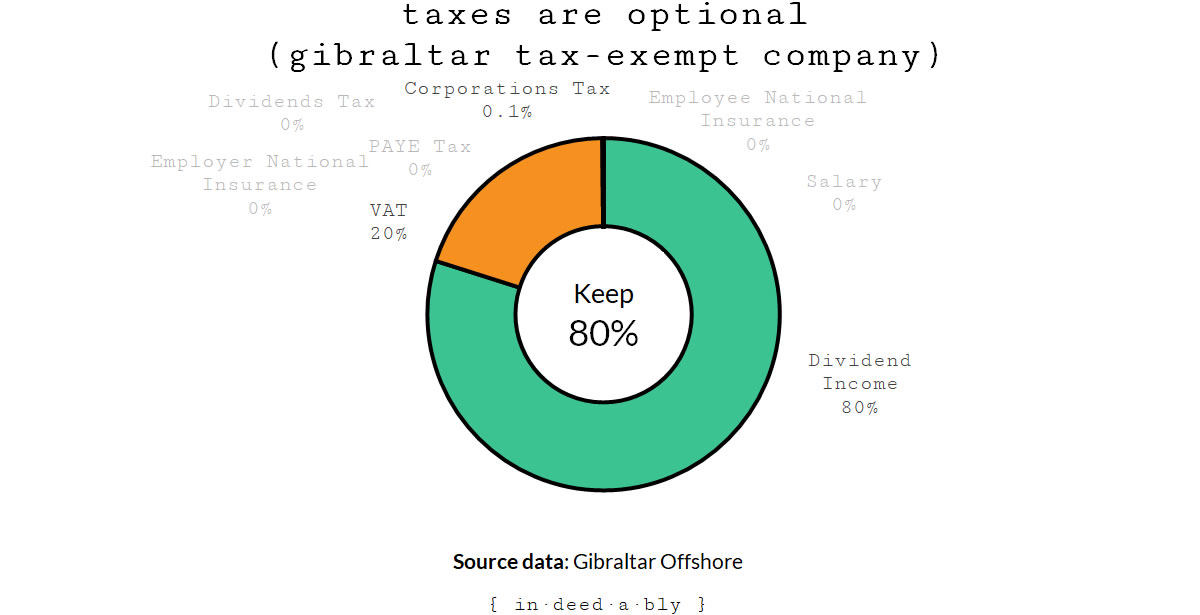 “My accountant is good for nowt!” grumbled the drunk freelancer, thoroughly deflated.

The Spaniard smiled smugly and threw back the last of his beer.

The incredibly tolerant lady behind the bar played Semisonic’s “Closing Time” on the pub stereo and began flicking the lights.

Time for you to go back to the places you will be from.

This room won’t be open ’til your brothers or your sisters come.

So gather up your jackets, and move it to the exits

I hope you have found a friend.

Every new beginning comes from some other beginning’s end.”

I recently wrote a post that encouraged readers to run their numbers based on their pre-tax incomes, because tax is a manageable expense just like any other.

Based on some of the reader feedback I received, it would be fair to say this suggestion touched a nerve!

One of the the more vociferously expressed emails I received reminded me of this night out, which occurred many years ago.

My purpose in recounting this tale is not to encourage you to avoid taxes at all costs. Rather it is to demonstrate how markedly disposable incomes can vary for the same person, performing the same function, for the same organisation; in no small part due to how effectively they choose to manage (or not) their taxes.

The passing of too many years (and too many beers) likely means I have misremembered or misunderstood the finer points of the approaches described above.

I have no idea whether the tax minimisation methods used by my former colleagues at the time would still work today.

Nor do I know whether those methods would have withstood scrutiny from the tax authorities at the time!

As always, maintain a healthy scepticism about what you hear in a pub, or read on a random stranger’s blog. Do your own research.

The charts displayed in this post use today’s tax rates.

I could pretend that I did this to make them more relevant and relatable to the audience, but the truth is I simply didn’t fancy the large amount of digital archaeology required to source the relevant historical tax rates.

With the exception of the Singaporean Corporation Tax, the rates today aren’t materially different from what they were back then.

To make each approach comparable, the percentages are all based on the same constant amount that the drunk freelancer was billing his client.

One final note: pensions have been ignored for the purposes of the comparisons. While they were (and remain) a very effective means of deferring tax, they weren’t mandatory back then. None of the people sitting around the table that night were making much use of them.

The Afrikaner did (eventually) receive a refund on his National Insurance contributions when he returned home. This provided him with a sizeable deposit for a nice house in Durban.

The Australian and the Spaniard both returned to their respective home countries when the Global Financial Crisis cruelled the freelancing market.

The Australian is now a CTO. Despite retaining large portions of his invoices throughout his years working in Britain, he lived large and spent it all.

The Spaniard used his tax savings to go back to school and retrain in a more rewarding (though not financially so) profession. He is now a qualified marine biologist, with dreams of being the next Jacques Cousteau. Unfortunately that doesn’t pay the bills, so he makes a living operating charter diving tours for rich tourists.

The drunk northerner fired his conservative account shortly after this night in the pub.

Several years later he got caught up in an Isle of Man loan forgiveness tax avoidance scheme. Last I heard the matter had gone to court, and he was facing some large fines and penalties for tax evasion.

Time scales, and where you want to live, can play a large part in determining your tolerance and attitude towards risk. Not everyone has the option of moving overseas or starting over.

Always be aware of the potential downsides of “too good to be true” tax arrangements, and choose wisely!

Update: Thanks to Mr YFG for spotting an issue with charts not updating correctly. That has now been fixed.