I silently cursed, as I wormed my way underneath the kitchen sink and attempted to identify the source of the water leak.

Pat prattled on about the triumphs and tragedies her thoroughly unmodernised kitchen had witnessed during her 50 years of home ownership. A hip replacement had restored her ability to get around town unaided, but cost her the flexibility required to look under the sink herself.

I had mostly tuned her out, as she recounted stoically battling to pay off her mortgage while raising a family on a single annual wage of just £2,000.

Mortgage interest rates in the mid-teens.

Pat grabbed my full attention when she mentioned the purchase price she had paid for the house.

“How much?” I demanded, reflexively attempting to sit bolt upright, and seeing stars as I brained myself on the underside of the sink.

Apathy for the win

That evening I ran the numbers to convert Pat’s £6,000 from 50 years ago into today’s money.

She was right, it had been a lot of money.

Throughout 50 years of home ownership, Pat had enjoyed a real compound annual growth rate of 5.48%. It hadn’t been a smooth ride, but over the long term there had been more ups than downs. 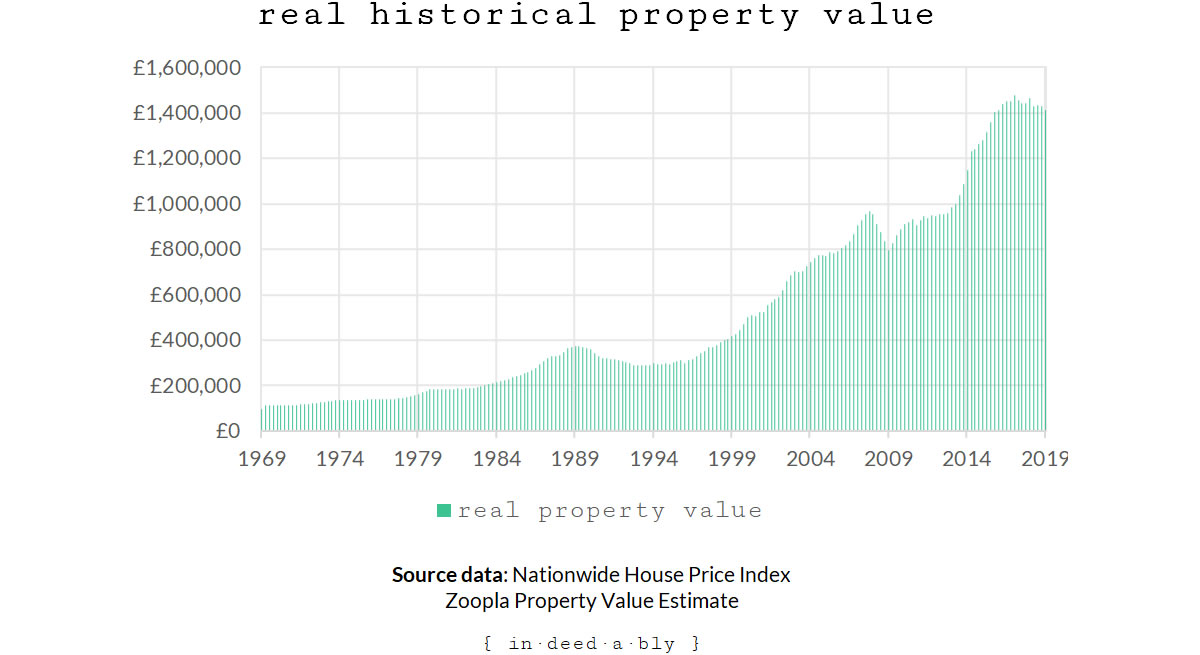 That got me wondering. Had Pat been an investing genius?

Pat had initially made a one-off investment decision. However, it was what she did not do that accounted for the bulk of her subsequent wealth generation.

Avoiding the vast financial friction that comes from relocating.

Choosing the magic of compounding over the termite-like hollowing out of their net worth, that occurs with each relocation.

Zoopla reports that the average British person relocates 8 times throughout their lifetime. Once they purchase their own home, they stay put for an average of 23 years. The more expensive the property, the longer the tenure of ownership.

Things only look cheap in hindsight

£6,000 seemed like an enormous figure 50 years ago but today looks ridiculously cheap.

Except here is the thing: things only ever look cheap in hindsight.

Despite all the bellyaching about property affordability, in 50 years time that £1,400,000 will likely look similarly cheap.

To illustrate, suspend disbelief for a moment and pretend that real compound annual growth rate continues for another 50 years.

Not a Chelsea townhouse.

Nor a Holland Park mansion.

Nor the Scottish isle or entire rural Welsh village that such a sum could purchase today.

No, it would buy that same uninspiring mid-terrace house, with dodgy wiring and rising damp, located on a suburban London road full of identical houses suffering similar problems.

You have to live somewhere

Everyone needs a home. That warm safe place they go to escape the demands of the big bad world.

Some folks thrive in the flexibility of renting. Happy to avoid sinking endless time and money into home improvements, gardening, and DIY projects.

Others prefer the feeling of control and certainty that only owning their own home can provide.

A once common third approach embraced the best of both those options:

In recent years the government has reduced the attractiveness of that third approach. An aggressive social policy agenda has led to a series of tax, compliance and tenant protection measures being introduced with a collective policy goal of discouraging private landlords.

I have long pursued that third option, paying far too much rent for a house conveniently located for a short commute to the city and within the catchment area of some outstanding (free) state schools.

Meanwhile, I operate investment properties with excellent growth prospects in areas where I have absolutely no desire to live.

Lately, I have started to question whether my approach is achieving the optimal outcome.

Perhaps there is something to the conventional wisdom of “bricks and mortar”?

It had certainly worked out nicely for Pat.

A question of timescale

I have a theory that capital growth makes you rich, but cash flow that makes you feel rich.

This makes the question of home ownership an interesting one. As Pat’s experience has shown, the timescales of the homeowner play a huge role in their cash flow profile and housing wealth.

capital growth makes you rich, but cash flow that makes you feel rich.

Over the short term, renting tends to be cheaper than owning.

The transaction costs associated with buying property are vast, both in terms of financial and emotional cost. Dealing with unresponsive conveyancing solicitors, voyeuristic lenders, slimy estate agents, and the collective indecisiveness of a property chain can be exhausting.

In the medium term, renting tends to cost more than the property holding costs and mortgage interest, but less than the total mortgage payment.

Should the rent fail to cover these costs, then the landlord would be running a loss-making business, effectively subsidising the living costs of their tenant.

Conversely, if the rent exceeded the full ownership costs, including the mortgage principal, then the logical course of action would be to own rather than rent.

Over the long term, the mortgage gets paid off. At that point funds that were previously servicing debt suddenly become free cash flows.

Alternatively, some owners choose to perpetually run interest-only loans. This allows inflation to erode the real value of the debt, while maximising cash flows over the life of the loan.

In either case, property prices in areas close to good employment prospects generally rise over time, generating wealth for the owner.

The inevitability of riches?

Having established the existence of several distinct cash flow and wealth creation patterns over different timescales, let’s test how my theory plays out over the 50-year projection for Pat’s house.

The first chart displays the projected value of Pat’s house over the next 50 years.

To begin with, some working assumptions. In real life the ride is unlikely to be this smooth:

In the absence of a lottery win or access to the Bank of Mum and Dad, the homeowner needed a mortgage to finance the purchase.

The second chart displays how their property wealth accumulates over time.

The home value line is displayed for comparative purposes.

In this case study, the homeowner pursues a similar investment strategy to the renter, investing any residual income after their housing costs are met.

Once the mortgage is paid off the surplus free cash flow that is available to invest increases considerably.

I must confess I was initially surprised at the magnitude of the difference in accumulated wealth between the homeowner and the renter by the end of the 50-year projection. Investing other people’s money is a powerful thing indeed!

The final chart brings my theory to life nicely. It plots the free cash flows after housing costs for each of the homeowner and renter over the 50 year period.

Initially it costs more to be a homeowner.

However, the renter’s housing costs are indelibly linked to the underlying value of the property they occupy. As property prices rise, so too does their rent.

At some point the cost of renting will start to exceed the mortgage payments.

From that point onwards the homeowner is in an advantageous cash flow position, as well as benefiting from the capital growth of the property.

Once the homeowner has paid off their mortgage entirely, their housing costs reduce to just that required for ongoing maintenance.

We shouldn’t read too much into the actual numbers displayed in this case study. There are at least a dozen assumptions baked into the analysis, any of which could quite reasonably be challenged.

History doesn’t repeat exactly, yet we do see familiar patterns reoccurring on occasion.

Change is constant. Life feels like a rollercoaster while we are leading it, yet when viewed over the long term that bumpy ride tends to smooth out.

It was the final chart, contrasting the free cash flow paths over time, that has challenged my premise on homeownership.

The results shouldn’t have been surprising, confirming the rules of thumb about timescales and outcomes I proposed earlier.

However, seeing them brought to life so vividly has given me pause.

My theory about capital growth making you rich holds true, but it is that rich feeling of having free cash flow which powers that growth.

I don’t want to live in my current neighbourhood forever, as Pat has remained in hers. Before long my kids will have outgrown the need for those school catchments, just as I have outlived my desire to work in the city.

I do want to live next to the beach one day. After analysing this case study, that house should be one that I own.