“What opinion do you have that most of your peers do not share?”

I let out a frustrated sigh as my forehead rested against the cool glass of the floor to ceiling window.

Far below, endless streams of harried office workers ebb and flow along the footpaths. Uniformly clad in dark business suits, battling their way through the crowds on a drizzly Wednesday lunchtime.

Sensing movement closer to hand, I spied a tiny black ant cautiously advancing across the inside of window pane towards me. At twenty-seven floors above the ground, that ant must have had quite the journey.

Realising it was being observed, the ant paused. We stared at each other, sharing a sense of impending doom.

Tracing back the path the ant had travelled, I noticed a long column of ants busily marching up the outside of the window frame. They too ebbed and flowed along their pathway, destination unknown.

My lofty vantage point providing an intriguing perspective that struck uncomfortably close to home. The similarities between the ants and the office workers were jarring. From a distance of 27 stories the people appeared a similar size to the ants outside the window.

Dashing out to complete some unknown errand. Important to the individual in the moment, yet inconsequential in the grand scheme of things.

With shocking suddenness, a squeegee scraped down the outside of the window.

One moment hundreds of ants purposefully braving the elements and marching ever upwards. The next they were all gone. Washed away, like they never existed, by an abseiling window cleaner.

I felt strangely sad for the lone remaining ant, advancing once more along my side of the glass.

Was it an intrepid explorer? Neil Armstrong venturing into the stars to see what was out there.

Or a rebellious nonconformist? Galileo Galilei standing behind the science, no matter the cost.

Perhaps the ant was being punished? Yuan Huangtou strapped to the kite to see if he could fly.

Whatever the reason, it had been an outlier. Now it was the last of its colony.

Did that prove the surviving ant was right, and its peers wrong? Or was it just random chance?

Perspective is a wonderful thing!

I had just emerged from a brutal board meeting where I had called bullshit on the approach being adopted for a multi-million-pound change programme.

The evidence was on my side: undercooked infrastructure, a calculation engine with a fondness for fiction, and a migration forecast to take decades to complete when the available window was just a weekend.

The politics not so much. Pride, reputations and livelihoods were on the line.

My opinion was unpopular, as welcome as a turd in a swimming pool.

Independent board members have a tough gig. What is best for the shareholders is seldom the same as what is beneficial to management.

That ant and I had much in common. When everyone else is so confidently wrong, it can be lonely and exhausting swimming against the tide.

History played out as I predicted, but not before the messenger had been shot for bearing bad news. 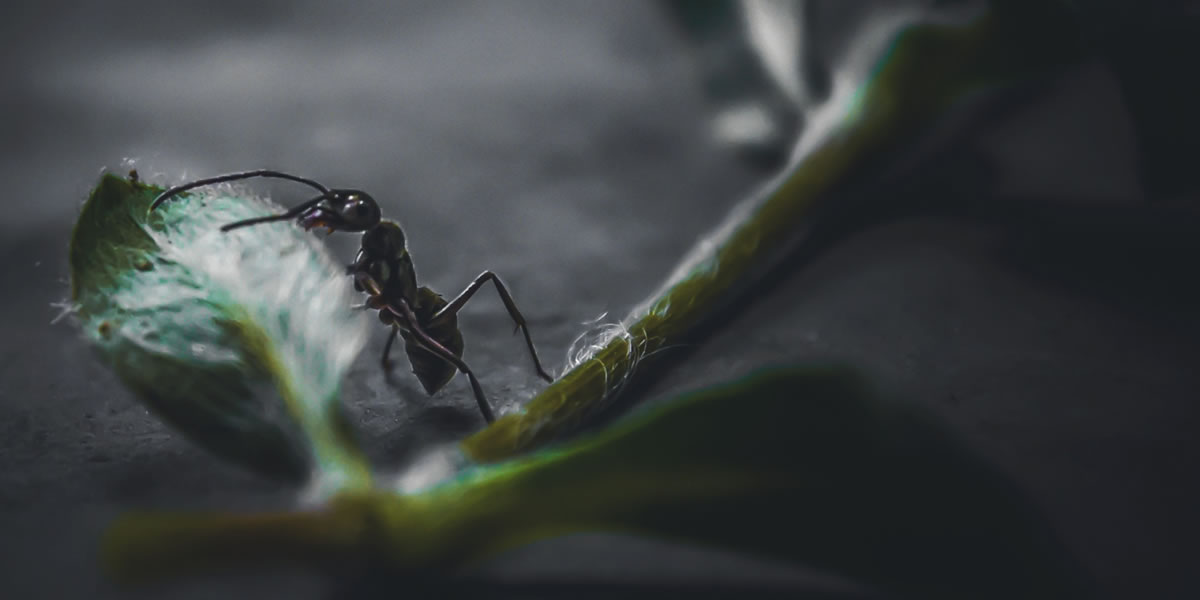 The key word in this thought experiment is “peer”.

Our peers are the other members of groups to which we feel that we belong.

Qualified to understand our opinions. Worthy of evaluating them. Potentially finding them wanting.

By implication, if you don’t care what someone else thinks, or don’t believe them worthy of judging your opinion, then you don’t consider them to be your peer.

Depending on how arrogant or self-confident you are, that may result in a vanishingly small peer group!

A nice thing about living somewhere that purports to celebrate the ideals of free speech and freedom of expression, is that we can each espouse opinions, no matter how flawed or ill-informed they may be.

Copyright, defamation, discrimination, hate speech, libel, patent protection, and slander legislation each water down those freedoms in their own way.

So too does political correctness and self-censorship.

Any new idea that challenges the orthodoxy is threatening and unpopular to begin with.

Some unpopular opinions make a positive impact and change the world for better.

Others are batshit crazy, and best quietly forgotten.

The important thing is that everyone has the right to believe whatever they choose. That right brings with it the responsibility to exercise that right respectfully.

Media ownership, social media audience size, and the legalised corruption that is lobbying each provide a megaphone for the opinions of those who can afford them.

Unpopular opinions often act as a lightning rod. Intentionally being controversial to stir up the angry mob. The media and “influencers” regularly use them to attract attention, while politicians deploy them to divert it.

What follows is a selection of opinions that I suspect the majority of my peers would disagree with.

Before anyone reaches for their torches and pitchforks, remember Dirty Harry’s view of opinions:

Taxes should be simple

The tax code should be simple and principle based. It should fit on a single-sided sheet of A4 paper.

If a seven-year-old can’t read, understand, and correctly apply it without prior instruction then it is too complicated.

All income should be taxed the same, regardless of origin or type of legal entity:

There should be no deductions or offsets. Let self-interest determine if an expense is worthwhile.

Tax-advantaged and tax-deferred accounts should be eliminated. The goal of pensions is enforced savings, which should be achieved via mandatory contributions and age restrictions alone.

Home ownership should be subject to capital gains tax. Gains should roll over when a homeowner moves house, but become payable when they sell and don’t buy again within a given time window, for example when they die or enter aged care.

Help those who can’t help themselves

Social security should serve as a guard rail, preventing people from suffering injury or disadvantage by falling over the edge. It should help those unable to help themselves, providing the specific assistance each individual requires to maintain a minimum acceptable standard of living.

All forms of social security should be means tested, including the age pension. This means test should examine the complete financial picture of the individual, including home equity and private pensions.

While someone owns saleable assets, they don’t need social security.

In cases where social security is required more urgently than assets may be sold, such as unemployment or disability, this should be provided in the form of a loan that can either be repaid or recovered from the future sale of assets.

Education, from nursery through to post-graduate studies, should be free for everyone.

Healthcare should be free for everyone.

Both education and healthcare are investments. A healthy well-educated populous benefits all of society.

There should be no bail-outs, incentives, subsidies, or tariffs. A business, industry, town or region is viable or it is not.

Uncompetitive ones should die off, not be propped up by the taxpayer.

Owning is better than earning

Earn a salary in a business owned by someone else, and your efforts generate wealth for them.

Work in a business owned by yourself, and your efforts generate wealth for you.

Employ others to work in a business owned by yourself, and their efforts generate wealth for you.

If you’re going to be doing the work anyway, you might as well maximise the benefits you realise from it.

The bulk of those interviewed for the “Millionaire Next Door” made their wealth owning a business, and retained it via modest lifestyle choices.

Choose wisely! Most people aren’t well suited to running a business, and most businesses fail.

Leverage is a good thing

The sensible usage of leverage can help achieve your goals much faster.

Mortgages, margin loans, and student loans are powerful tools when used correctly by people who understand the additional risk they bring.

Get it wrong and risk blowing yourself up. Own that risk.

Peer-to-peer lending is a bad thing

Question the business acumen of someone willing to pay over the odds to obtain a loan for a business venture. To reach that point they have already ruled out the more affordable traditional lending routes, either through self-selection or outright rejection.

This whole class of borrowers will likely face liquidity challenges concurrently, in the event of economic downturn or high-interest rates. The market for reselling loans will dry up, at the same time that defaults increase.

The yields are high for a reason, the higher the risk the greater the potential reward.

A common refrain is that the world is rapidly changing, technology is advancing, and the days of the singularity are rapidly approaching. Before long we’ll be like those lazy humans in the movie Wall-E, pampered by robots and incapable of doing anything for ourselves.

Except here is the thing. The rate of innovation, and the pace of change, has slowed markedly. In domains ranging from space travel to antibiotics we are actively going backwards. Stupidity and short-termism triumphing over science and exploration.

We’ve become adept at automating things and making minor tweaks to existing ideas. When compared to periods of genuine innovation like the Renaissance, the Industrial Revolution, or World War 2 it is as if we are standing still.

I’ve reached the unfortunate age where I attend more funerals than weddings.

Suicides and overdoses aside, I am unable to identify a discernible relationship between how a person lived and when they died.

Perhaps the balance tips the other way later in life? For now it seems that when your number is up you are screwed, no matter how many salads you eat or miles you run.

Healthy living is still worthwhile simply because it makes you feel good. However I suspect the longevity benefits are oversold by underfunded health service struggling to cope with the vast costs of obesity.

As Freddie Mercury once sang “nothing really matters”.

If you’re reading this, then in 100 years time you will be dead. It is one of the few certainties in life.

In 150 years time, you will be forgotten. A ghost in an old photograph. An etching on a tombstone.

In 200 years time, the only people who may even remotely care you existed are your descendants.

There is the occasional exception of course: geniuses, heroes and tyrants. Remembered by the popular versions of their stories, which may or may not have any grounding in the truth.

When measuring value based upon long term outcomes, this means that very little of what any of us may achieve, earn, enjoy, or own matters in the grand scheme of things.

We are like those ants on the window frame. One moment we’re living our lives full of day to day trivialities and worries. The next we are not. The world moves on.

Understanding this can be liberating.

That thing you’re worrying about at work, or fighting over with your spouse? Doesn’t really matter. No different to the marching of the ants, or the scurrying of the ant-like lunchtime office workers.

With very few exceptions, nobody will die based on the outcome.

In 10 years time, will anyone remember? Will they care?

Relax! Despite what the news tells you, life is actually pretty good.

It could be so much worse.

You could be that bloke dangling from the end of a rope, suspended 27 stories above the ground. Cleaning windows in the rain.

Or you could be the ant crawling across the window pane. Far from home and all alone.