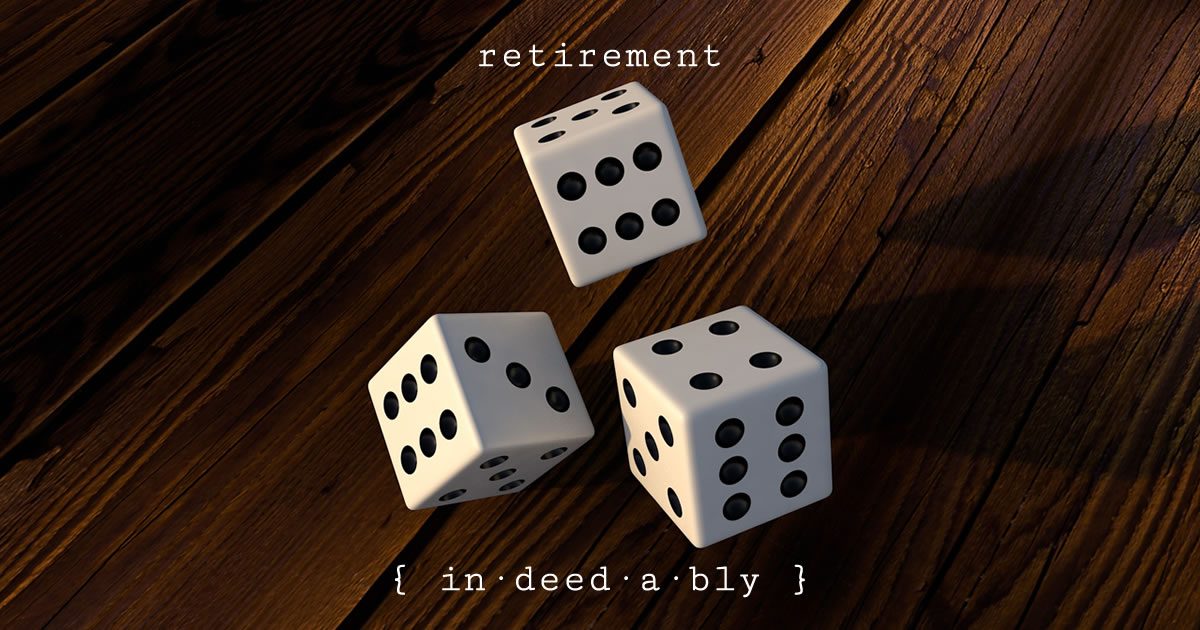 There is an infinite number of paths leading to retirement.

Some we choose. Many are chosen for us.

Here is the thing: we will only know if we had enough saved to finance our retirement in hindsight.

The size of that number, and the timing of the decision to leave behind one career in search of the next chapter of our life, is a uniquely personal one.

Adam was a big kid. Built like a fridge, and weighing about the same. At school he started playing rugby league.

It turns out he was good at it. Tackling a fridge isn’t much fun. Nor is having one fall on you.

When aged just 15, he was representing his country in the national schoolboy’s side.

By 16, Adam had made his debut in first grade as a professional footballer playing against grown men twice his age.

Two minutes into his 40th professional game, the fridge was felled by a sledgehammer.

After the game, a pre-cautionary x-ray discovered a problem unrelated to the dangerous tackle. The subsequent routine surgery went horribly wrong, leaving 20-year-old Adam fighting for his life.

And his short term memory.

As an 11-year-old kid, Beccy decided she was going to be a surgeon. A great one.

She was going to help broken people.

Fix what ailed them.

There was one small problem: Beccy grew up in struggle town.

One downside of growing up in a disadvantaged area is that children receive a substandard education. We don’t like to talk about it, but the choices a parent makes about living locale and schools have a lifelong impact on their child’s career choices and future earning potential.

Growing up rich and attending top schools may not guarantee success. However, while It is not impossible to succeed after attending failing schools, it is highly unlikely.

Students ranked against their classmates.

Their school ranked against other schools.

Beccy demonstrably topped the former. Her failing school served as an anchor for the latter.

One by one, the esteemed medical schools slammed their doors on Beccy’s dreams.

Until there was just one remaining. A small school, in a remote and undesirable location.

Beccy was accepted. Years of training shaping her into the surgeon she had dreamt of becoming.

Their residencies were performed in underfunded developing world hospitals, where even partially trained medical professions were desperately needed and in short supply.

For more than a decade, Beccy was one of the very best.

The surgeon that other doctors turned to when a case is headed for the “too hard” basket.

One day Beccy was diagnosed with early-onset Parkinson’s. It is hard for a surgeon with shaky hands to “first, do no harm”.

Jules was one of the calmest people you could ever hope to meet.

His unflappable temperament honed over a career spent defending mission-critical systems from the torturous attentions of incompetent developers.

A near miss long ago had led Jules to a side hustle that was uniquely suited to his temperament.

Jules had been trailing his wife around a department store on London’s Oxford Street. Many would describe this as an unfortunate, if unremarkable, way to spend a Saturday during football season.

That changed when terrorists detonated a series of bombs that ruined the shopper’s day.

The next day Jules joined the Army reserves, intent on becoming a bomb disposal expert. He wanted to do what he could to prevent a repeat of the tragedy he had experienced first hand.

The bulk of his assignments involved defusing pipe bombs constructed by foolish teenagers, and combing through the rubble after domestic disputes turned ugly.

The same could not be said for his eyesight. Macular degeneration bringing a premature end to both his routine day job and superhero side hustle.

Matthew was a wastrel, but fun to have around.

He dropped out of school at the earliest opportunity.

There was always a bullying boss. A scheduling error. An entirely unpredictable stroke of bad luck. Never his fault.

Matthew’s single mother had raised her three children in a council house on a disability pension.

Her disability appeared to be alcoholism. A job she took very seriously.

For decades she conscientiously earned her pension. Every day at 16:00 she could be found sitting on her front stoop with a bottle of cheap supermarket wine. Displaying admirable commitment, she wouldn’t move until it was empty.

When Matthew was aged in his late twenties, his mother’s work ethic and dedication outlasted her liver.

In the space of a heartbeat, Matthew lost his mother. His home. His only reliable means of covering his lifestyle costs.

After the funeral, Matthew had an epiphany: unemployment and housing benefits are the same regardless of where a person lives. Therefore there was an opportunity for geographic arbitrage.

Where would you rather be unemployed? In the inner suburbs of a big city? Or living by the beach?

He lives in a rented trailer, and has taken up the family business.

Certainty is only possible in hindsight

Monte Carlo simulations and retirement calculators are fun toys to play with. They provide false confidence and the illusion of certainty to our spreadsheets full of fiction, guesstimates and wishful thinking. Results only as good as the inputs we supply.

However, every piece of finance industry marketing material you have ever seen will have featured a variant of “past performance does not guarantee future results” for a very good reason.

Just because it happened before doesn’t mean it will happen again.

Every summer global warming delivers record high temperatures and “once in a generation” bushfires, floods and storms with monotonous regularity.

Just because it hasn’t occurred before doesn’t mean that it can never happen.

A machine gun-wielding Franky Zapata flew a hoverboard over the parading troops on Bastille Day. Fortunately, this turned out to be a publicity stunt, not a terrorist attack.

The French military brass recognised this as an opportunity. Their strengths lay in defending against known threats, not imagining previously unseen ones. So they hired professional Imagineers to dream up new and unusual disruption scenarios.

Science Fiction writers were drafted in to help the military prepare for some of Donald Rumsfeld’s “unknown unknowns”.

The next assault more likely to be a hobbyist drone carrying a pipe bomb, than a tank blitzkrieg from Rheinland.

A zero-day exploit of utility provider control systems, executed from a nice air-conditioned office thousands of miles away.

Like military war games, we can and should dream up all manner of disruptions and stressors for our own financial plans.

There are two certainties when it comes to retirement:

Only once we accept that life is uncertain, and “life happens” events will occur whether we want them to or not, are we in a position to objectively assess our retirement prospects.

There is only risk.

There are no certainties.

Our planning exists to mitigate those risks to a level we each find acceptable.

Where we can sleep well at night.

Financial planners often advise their clients to hold “100 – your age” in shares, with the remainder in bonds.

This isn’t about maximising returns. The goal is to smooth out the ride, speed bumps and puddles rather than cliff tops and waterfalls.

Retirees live on their investment income, needing it to pay for their groceries.

Workers live on their wages. Regardless of whether the market gods piss on them from a great height, their bank account will be replenished with their next paycheque.

That is a luxury a retiree no longer enjoys. A safety net they no longer possess.

Beccy and Jules led long and rewarding careers, for which they were well remunerated. Their nest eggs were sizeable when they prematurely entered retirement.

Less than they had hoped for, but more than most.

Their future financial success to be determined more by expectation management than magic numbers.

Adam had been just starting to live the dream, when fate threw him a hospital pass.

He is alive, which is luckier than some. Others may argue that a life without a reliable short term memory isn’t much of a life at all. Just ask the next Alzheimer’s patient you encounter.

His career was too short to earn much. As a young man, experiencing having money for the first time, he saved little.

Now he is the embodiment of everything a disability pension is designed to support, those unable to support themselves.

Matthew’s school reports always contained a variant of “capable of great things, if only he applied himself”.

He didn’t. It is unlikely he ever will.

In many ways Matthew’s existence is preposterous.

He consciously decided at a very young age to not make a positive contribution to society. Freely choosing to take advantage of that same social safety net that supports people like Adam.

Yet while the narrative may differ, Matthew’s financial plans are no less outlandish than many of those who plan to retire early.

Ultimately it doesn’t matter whether anyone else agrees with your retirement plans. The choice is a personal one.

Those consequences may include decades happily spent investing time in activities that bring delight and joy.

No cubicles. No commuting. No complaining.

Alternatively, the money may run out. Requiring a Plan “B”.

Like living in a tent. In their parent’s backyard. With their spouse. And children.

Whatever the outcome, there is no hiding from the accountability. Having made the plan, you live with the consequences.