Toll of the daily commute

The shrill screeching of the dentist drill shattered my sense of inner peace. I cringed, my shoulders tensed, my heart raced, and I instinctively located all the available escape routes.

Fortunately this time it wasn’t me who was due for a dentist visit. Even so, memories of a teenage me having all four wisdom teeth removed in the dentist chair come flooding back whenever I hear that torturous sound.

The drilling ceased, and moments later a shell-shocked pensioner unsteadily wobbled out of the dentist’s rooms.

The dentist popped her head around the door and invited my elder son into her room.

We both stood. He glared at me sullenly, having expressed a very strong desire to fly solo on this visit. Unfortunately, this wasn’t out of bravery. He didn’t want me to hear the dentist call him out for not brushing his teeth properly. Again.

I perched in the corner while the dentist instructed the boy to assume the position. Then she picked up the instruments of torture so beloved by her chosen profession, and commenced poking and prodding while speaking in that unintelligible tongue that only dentists and dental hygienists comprehend.

Sure enough, the boy needed another filling. Sigh. He shrunk down into the chair, attempting to make himself invisible.

The dentist informed me that he would need braces, but that if we moved quickly he would be able to have them fitted prior to his 15th birthday… for free on the NHS. Quickly? The boy was still aged 11! I never cease to be amazed by how much perspective can vary our understanding of events.

As the dentist turned back to attack my son with the drill, I attempted to escape to my happy place.

In search of the good life?

Once the drill switched on I quickly abandoned that plan, the noise is impossible to block out.

I cast around for a distraction, finding on the countertop next to where I sat a dog-eared copy CountryLife magazine opened to an article titled “50 best places to live near London”.

Amongst the clichéd pictures of genteel manor houses and bizarre red-faced Morris dancers, many of whom looked like walking heart attack candidates, was a surprisingly well-researched piece detailing commute times and season ticket prices.

I’ve often wondered about the wisdom of the city workers who undertake lengthy daily commutes.

The property prices may be cheaper out of the big city, but the quality of life experienced by those enduring a long and often stressful daily commute must surely suffer. If they were able to reliably get a seat, and use the time productively to study or even sleep, then maybe it wouldn’t be so bad.

I decided to challenge my preconceived notions by diving into the economic reality of commutes.

Using the CountryLife location list as a starting point, I then supplemented it with some additional popular commuter towns. Finally I added an assortment of London neighbourhoods to use as a control group when evaluating the economics of a lengthy commute.

I selected Bank underground station as the destination. This was chosen because it is in the centre of the “square mile” of the City, and is also the hub of the London Underground network. 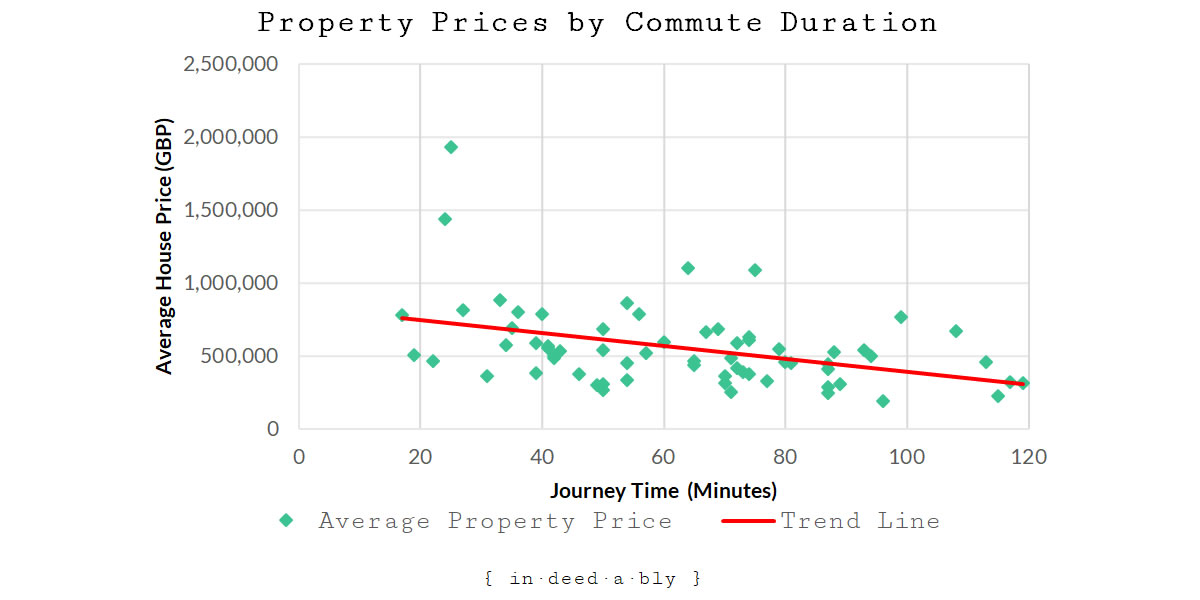 The general trend displayed was an inverse correlation between property prices and journey times. For this sample at least, the story the trendline tells is that property prices appear to decrease by roughly £4,500 for each additional minute of commuter journey time incurred.

… property prices appear to decrease by roughly £4,500 for each additional minute of commuter journey time incurred

As with earning a living, it appears commuting also involves trading your precious time for money!

Next, I examined what the annual season ticket prices were for those commutes actually cost. 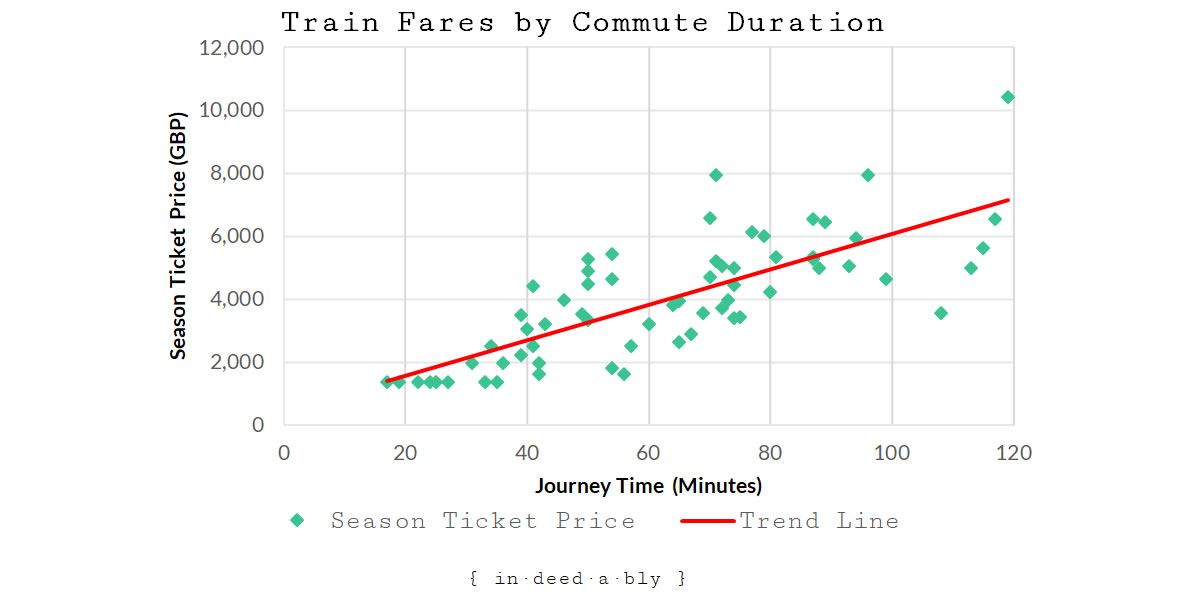 I had expected a general trend reflecting that a long commute resulted in a higher the cost. What I hadn’t expected was the huge variance in those costs!

Property prices may dominate the media headlines, but financial well being is determined by recurring cash flow.

… financial well being is determined by recurring cash flow. 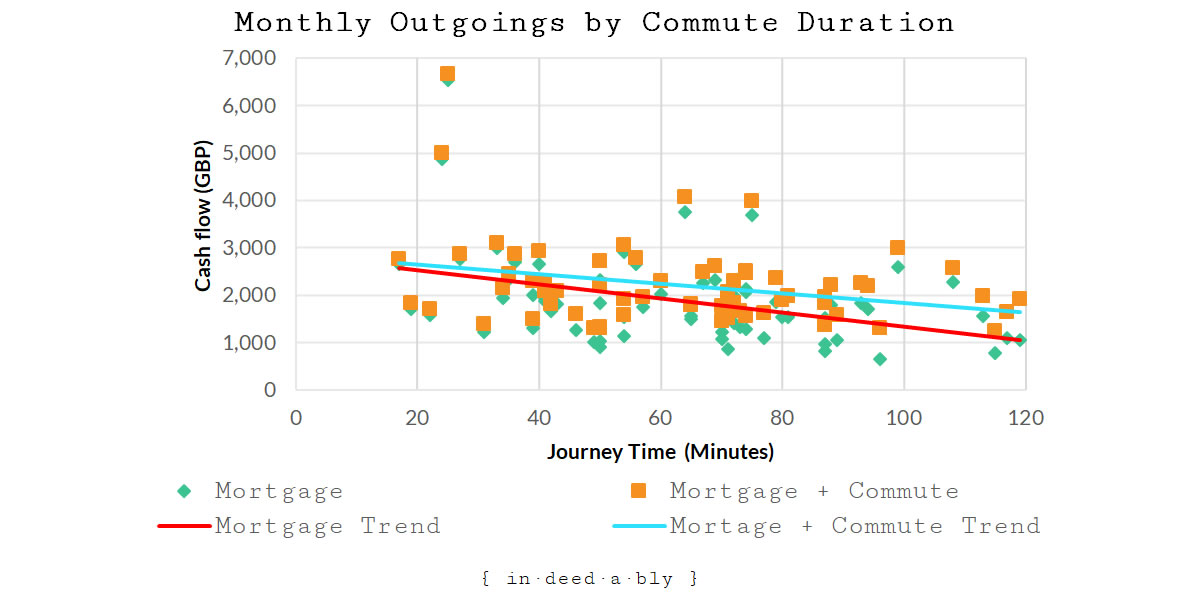 The interesting story this chart has to tell us is the inverse correlation between property prices and commute journey times is much weaker when transport costs are factored in.

For this sample, after accounting for outliers, the trend line indicates that the annual cost of servicing a mortgage and paying for annual season tickets decreases by roughly £135 per year for each additional minute of commuter journey time incurred.

… the annual cost of servicing a mortgage and paying for annual season tickets decreases by roughly £135 per year for each additional minute of commuter journey time incurred.

These figures start to explain the behaviours of the migratory herds of harried commuters stampeding towards overground stations at rush hour.

Why try and squeeze your growing family into a tiny apartment in London? For the same money you can move out to the countryside in search of “the good life” and get more property for your pounds?

If you went far enough out you could potentially afford a veritable palace for less than the cost of a central London parking space!

Hold on, not so fast!

There is a vital piece missing from the cost versus benefit equation: the value of your time.

It 2018 a typical commuter will trek into their workplace 228 times once weekends, bank holidays and annual leave entitlements have been taken into account.

Each of those working days incurs two editions of the worker’s commute: getting there and heading home again.

How much is all that time spent commuting worth to you?

How does the picture change if we valued our time in the same way that an employer would?

According to figures released by the Department of Work and Pensions, in 2017 the median weekly disposable income before housing costs for a London household was £536. Assuming an 8-hour working day, that equates to each minute the median individual works in London being worth £0.22 to them.

… each minute the median individual works in London being worth £0.22 to them.

The next chart plots how things would look assuming we had to “pay” market rates for the value of our time spent commuting, in addition to the commuting costs and mortgage payments previously discussed. 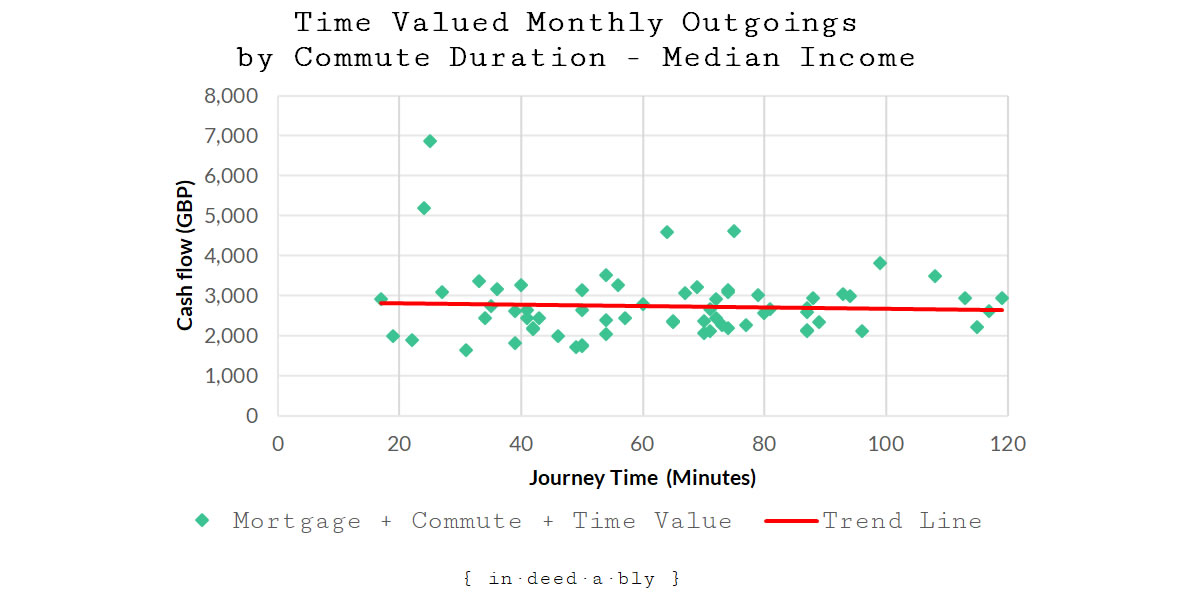 The results were unexpected. At the median London disposable income level time valuation, the outgoing cash flows are essentially the same regardless of the commute journey time.

The story this chart tells us is that once we place a premium on our time, there was virtually no tangible cash flow advantage experienced by those with longer commute journey times.

What happens when our earnings increase?

Many financial services organisations apply a universal “blended” cost of £750 per person per day as a budgeting measure.

This figure represents the total cost to the business of adding an additional body. Regardless of their skills or experience. It is a total that includes salary/day rate, office accommodation cost, and equipment cost.

That equates to each minute the individual works costing £1.56, assuming a standard 8 hour day.

… each minute the individual works costing £1.56… 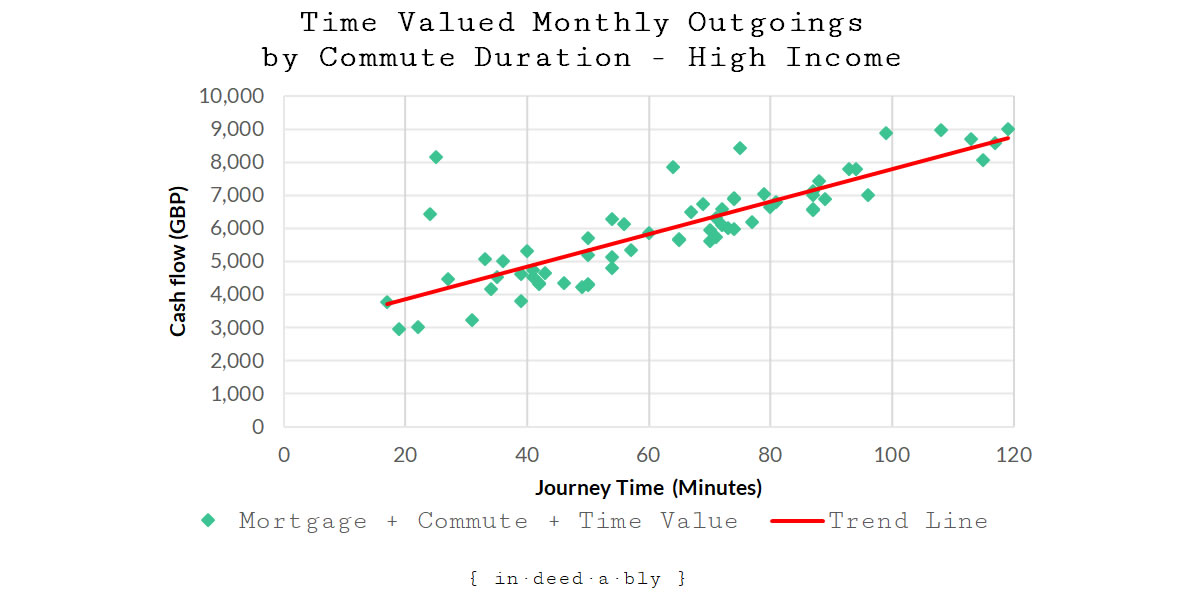 Whoa! There is now a strong positive correlation between commuting journey times and the total cost of residing in a given location.

In other words, once a high premium is placed upon your time, the longer your commute duration the poorer you are for it.

What does this tell us?

At the risk of stating the obvious (it is a gift!), the more you earn the more your time is worth. 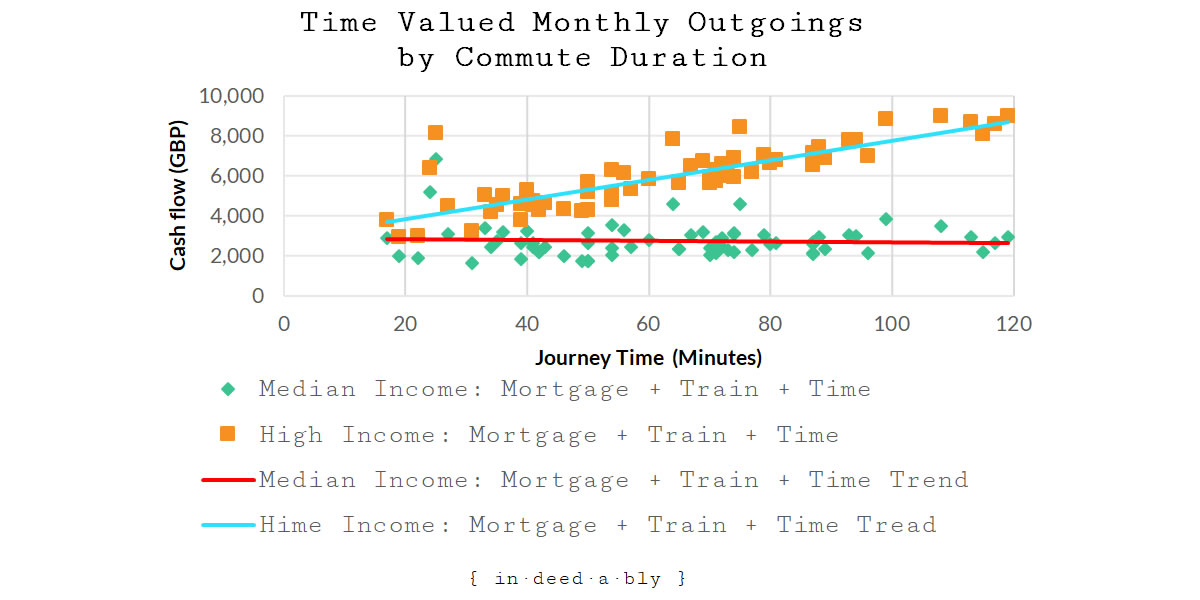 Our time is never “free”, there is always an opportunity cost associated with how we invest it. If we are working then we aren’t playing with our kids. When we watch Netflix, we aren’t going for a jog. While we are commuting we aren’t having any fun.

The larger the premium we place upon our time, the greater that opportunity cost becomes, particularly where we invest out time in low value activities such as commuting.

It is important to note that there is more to value than monetary earnings, value also includes things we derive pleasure or enjoyment from.

… there is more to value than monetary earnings, value also includes things we derive pleasure or enjoyment from.

The value of what you are heading home to, at the end of that commute, must justify the opportunity cost incurred by undertaking the journey.

Toll of the daily commute

If you love where you live then the impact of that opportunity cost is lessened.

If you live somewhere that is both crap and far away, then vast chunks of your life are being sub-optimally utilised.

The higher your income climbs above median household disposable income, the more expensive that cost becomes. This is the true toll of the daily commute.

For each of us there will be a tipping point where the cost of a lengthy commute begins to outweighs the benefits.

At that point it is worth considering “buying back” your time by moving closer to work, despite the potentially higher housing costs.

We can always make more money, but once spent time is something we can never recover.

We can always make more money, but once spent time is something we can never recover

The table below contains the location list and figures behind the charts used in this post. They contain the following assumptions: