A preference, not a right

In the United Kingdom all children are entitled to receive a free state education. However, not all of those educations are created equal.

At the other end of the spectrum 1,841,717 students attended state schools that had been found to be Outstanding, accounting for 24% of the total state school student population. 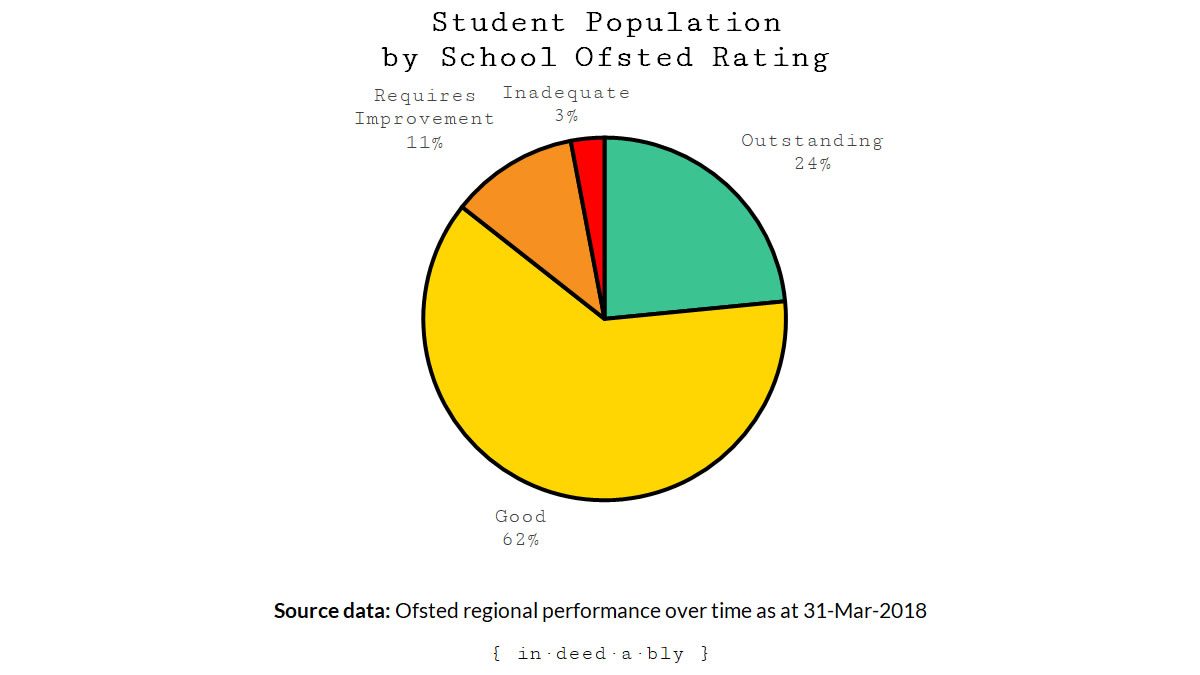 Student population by school Ofsted rating as at 31-Mar-2018

Winning isn’t guaranteed, but it is more likely

Is a good Ofsted report all important? Certainly not. However it will be harder for the children attending substandard schools to obtain the calibre of education they require to successfully gain admission to a good university.

The quality of a university education varies considerably between degrees and institutions, just as it does by Ofsted ratings for schools. However the Office of National Statistics reports that university graduates generally out-earn their less educated peers. 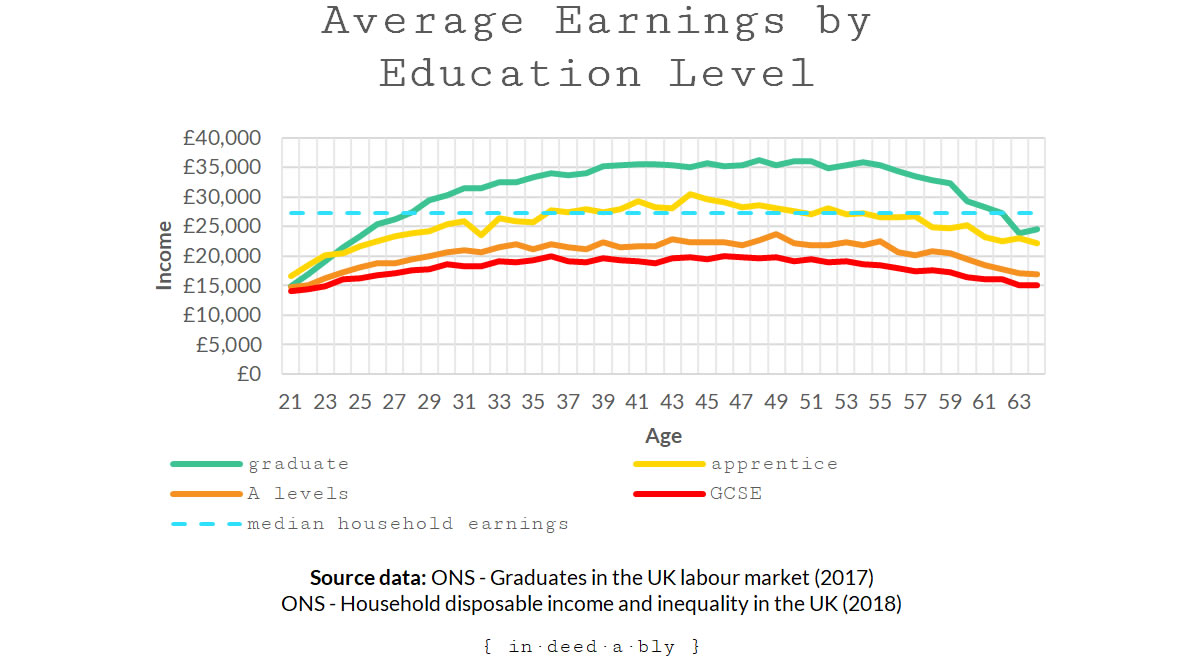 We want universities to churn out smart successful graduates who possess the superpowers of applied problem solving, common sense, research skills, and persistence. Regardless of the discipline studied, a person armed with these key skills can succeed at anything… something the annual Big 4 consultancy graduate intake proves every year!

I believe everyone should be discriminated against equally. Every university places should be allocated to the very best student that the institution can attract… regardless of who they are, where they are from, or where they went to school.

It should be a viable option, for every kid from every school, to want to work for a high paying large investment bank or technology firm if they so desire. Hopefully most of them will be wiser than that, but their choice of primary or secondary school shouldn’t eliminate it as a possibility.

In the absence of the fabled “level playing field” however, parents do what they can to provide their kids with every possible advantage.

You get what you pay for?

Consider the diagram below. It charts the progression through the university acceptance process for English school leavers in 2017, broken down by independent and state funded school types. 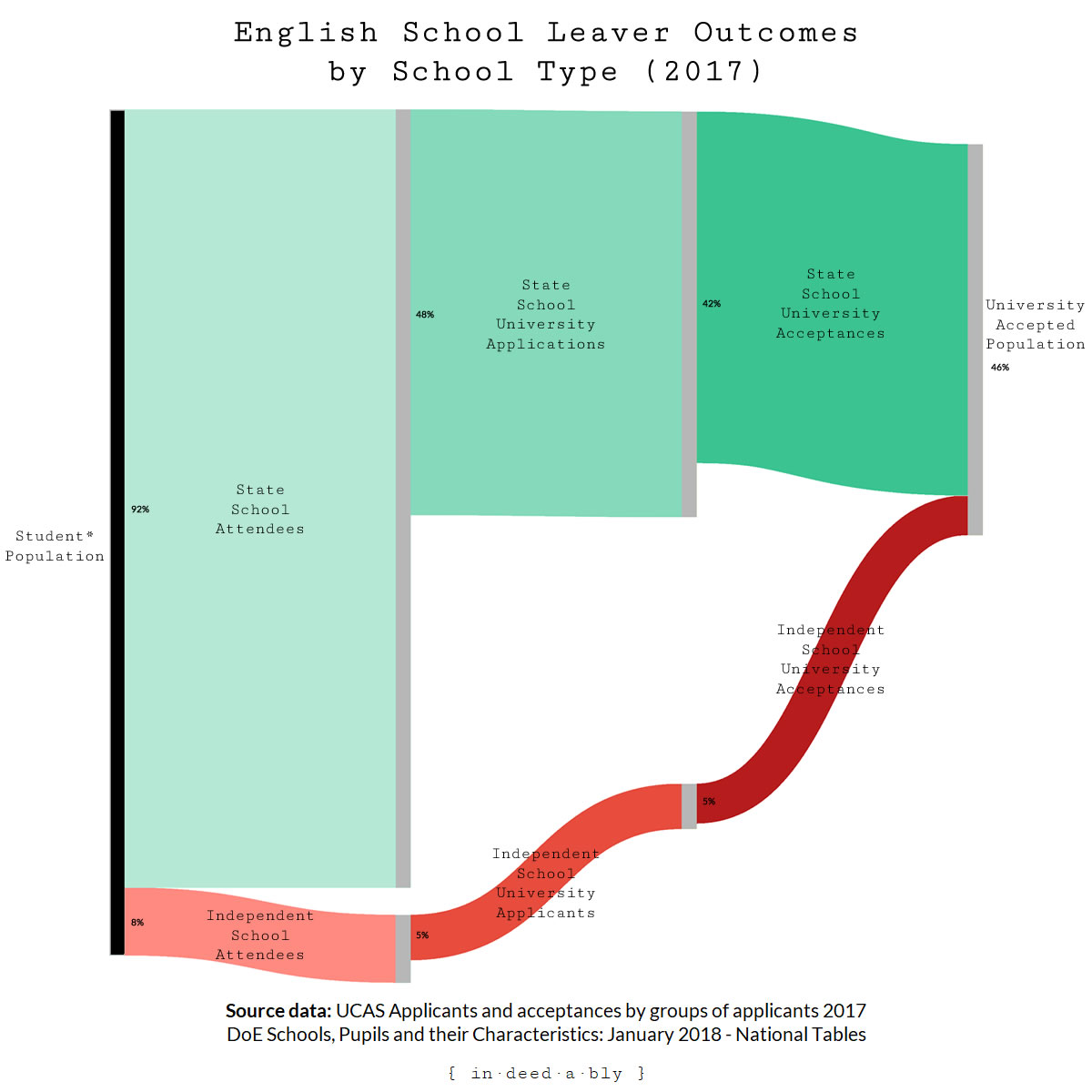 To avoid the survivorship bias commonly observed in university admissions reporting I have started with the total* school leaver population. Only half of state school students apply for university, while the two thirds of  independent school students do.

(* note: actually I used a proxy for this – the total number of 14 year pupils enrolled in English schools – because it is below school leaving age, so should include kids who later drop out. The available datasets report based on student age rather than school year, however a school leaver could be aged anywhere from 17 to 19 when the finish school).

Regardless of how you feel about independent schools, they do tend to be better resourced than their state funded alternatives. That should (but doesn’t always) translate into smaller class sizes, better equipment, and more support available to assist the needs of individual students.

These advantages boost the likelihood of an independent school student being accepted into university.

Some parents are able to find the money to send their children to a good fee-paying independent school. This can be as high as £40,000 per child per year! 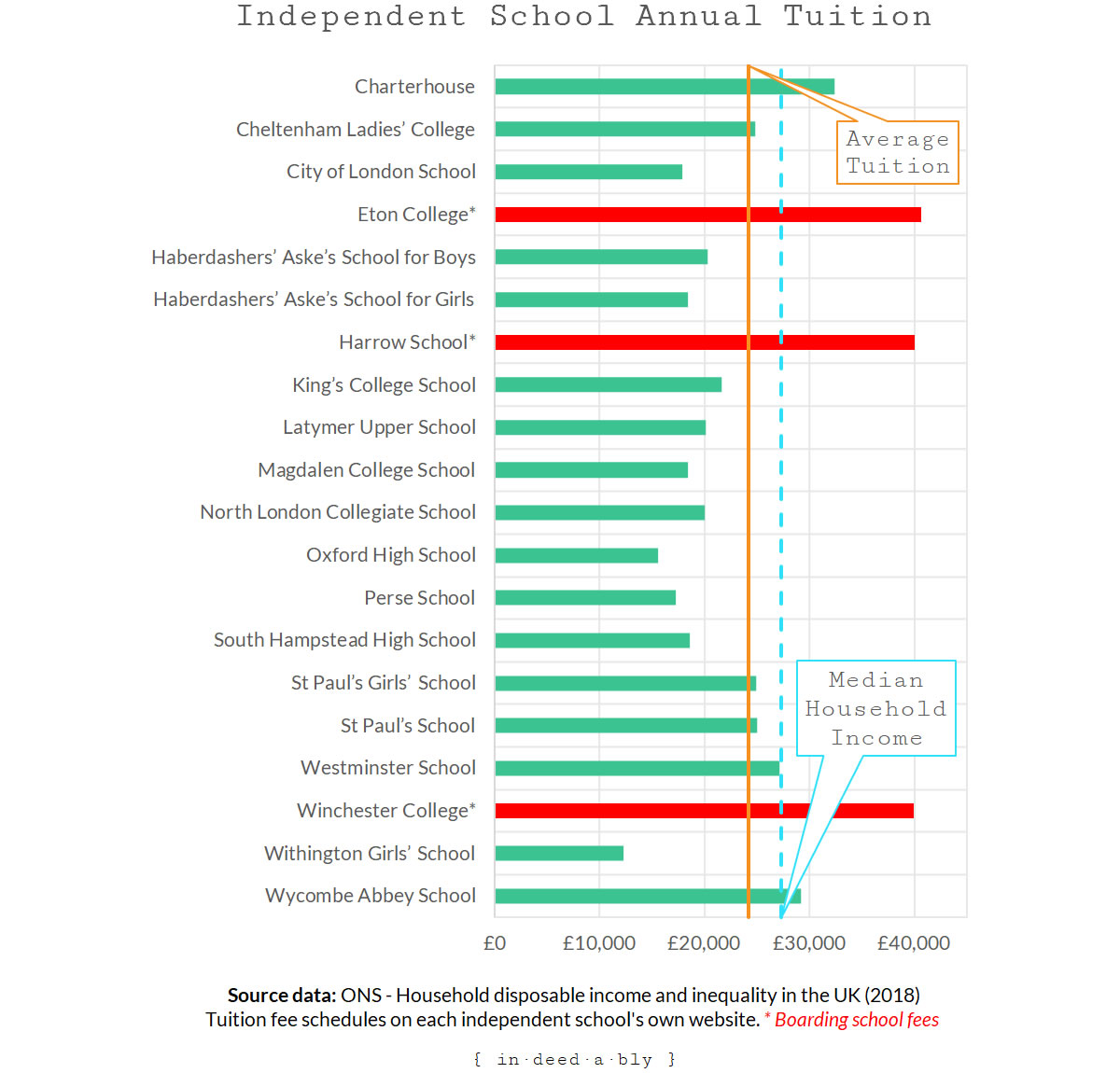 The next best thing… a good state school?

A favourable Ofsted report yields a similar outcome. Attracting and retaining high calibre staff becomes easier if a school is reported to be outstanding.

This increases demand, resulting in rising rents and property prices. Catchment areas shrink and families from lower socio-economic groups get priced out of the neighbourhood… and the outstanding school.

For those of parents who are unable (or unwilling) to afford those eye-wateringly high tuition fees, that means playing the school admissions game.

Unsurprisingly, the outstanding state schools are greatly sought after. A scarcity of available places mean that the laws of supply and demand apply. Those parents who wanting the free state school place the most will find a way to meet one (or more) of the criteria outlined below.

The school admission selection criteria are as follows, in descending order:

The SEN criteria is hard to game. Local authorities are understandably reluctant to issue a Statement of Special Needs, as doing so ties up scarce austerity starved educational resources.

To illustrate, consider my younger son’s state school. Each class is supposed to have both a qualified teacher and a dedicated teacher’s assistant.

Where a class contains a special needs child without a statement, the teacher’s assistant role ends up focussed on supporting the SEN child. This leaves the qualified teacher to fend for themselves with the remaining 25-30 children.

When a statement is issued then funding is allocated to providing a dedicated resource to assist the special needs child.

Unfortunately, in practice this tends to result in a reprioritisation of existing funds, rather than an issuing of additional funding to the school. Through no fault of the special needs child, the school’s ability to fund art, drama, music and sporting programmes to the whole student population suffers as a result.

The children in care is another criteria that is hard to game.

These poor unfortunate kids were dealt a very unfair hand in life. A precious few triumph in the face of such adversity, but unfortunately a much greater number succumb to it.

The gaming starts with this criteria.

This criterion is designed to assist kids requiring specialist skills or tuition.

It also exists to help the kid from primary school who got bullied so bad they wet their bed or tried to self harm. Perhaps they wish to go to a new school, away from all their bullying former classmates.

However, overeager parents attempt to procure doctors certificates that proclaim their precious offspring possess from all manner of gifts or maladies that can only be addressed by admittance to their desired outstanding school.

To provide a flavour of this type of shenanigans, I once took my son to sit an 11+ exam at a private school (having a viable plan B is always a good idea). I got talking to one of the exam invigilators. She was disgusted that over 40% of the 1,200 kids sitting the exam had obtained GP/psychologist letters stating they suffered from Attention Deficit Hyperactivity Disorder (ADHD).

According to the NHS, the medications commonly prescribed to treat ADHD “… help someone with the condition concentrate better, be less impulsive, feel calmer, and learn and practise new skills”.

… help someone with the condition concentrate better, be less impulsive, feel calmer, and learn and practise new skills.

Children suffering this malady are also granted additional time to complete their examinations.

To many parents of children sitting competitive entrance exams, the gaining extra time or enjoying enhanced concentration and calmer nerves, sounds exactly like an advantage they want their offspring to enjoy!

The Centers for Disease Control and Prevention reports the morbidity rate for this condition in the general population is approximately 9.4%. I have no doubt some of the children sitting the exam genuinely suffered the condition, but the majority of them did not.

It is up to the school to call bullshit on these pleas for social or medical needs… a potentially expensive legal minefield for under-resourced state schools when faced with wealthy or litigiously minded parents.

More than a few parents have volunteered as after-school club sports coaches or music instructors to smooth the way for their offspring’s school admissions.

Many in-demand schools are now imposing multi-year minimum time-served limits on these positions before they become a factor in the admissions decision making.

It didn’t take ambitious parents long to figure out that “children of partners” residing at the same address was an easy admissions lever to pull.

An interesting side note on the sibling criteria, for oversubscribed schools it generally is only applicable to “siblings” who currently attend the school.

Many admissions rules state a variation of “If parents are separated and share custody, the parent who the child spends most of the school week with … should make the application.”

In practice this is often interpreted as: if parents have access to two addresses they can make the application from the closest one.

This creates is a thriving market for pied-à-terre rental addresses in the streets immediately surrounding an in-demand school.

… creates is a thriving market for pied-à-terre rental addresses in the streets immediately surrounding an in-demand school.

The published state school “catchment area” maps generally show a circle centred on the school, with a radius the “as the crow flies” distance to the farthest successful applicant’s residence from the previous year.

The more oversubscribed the school, the smaller the circle becomes.

Simply residing close by not guarantee a place at an oversubscribed school. It merely provides the child with a viable entry in the admissions race. As the old lottery slogan said, “you have to be in it to win it!”

To combat attempts to game the system, many oversubscribed state schools have introduced banding tests.

Comprehensive schools are supposed to be “non-selective”. This means they are not allowed to just cherry pick the high achievers.

Instead, applicants are ranked based upon their banding test results. The applicant population is then divided into bands, for example quartiles. The top n applicants from each band are then offered a place, using the proximity test (where required) as a tiebreaker. 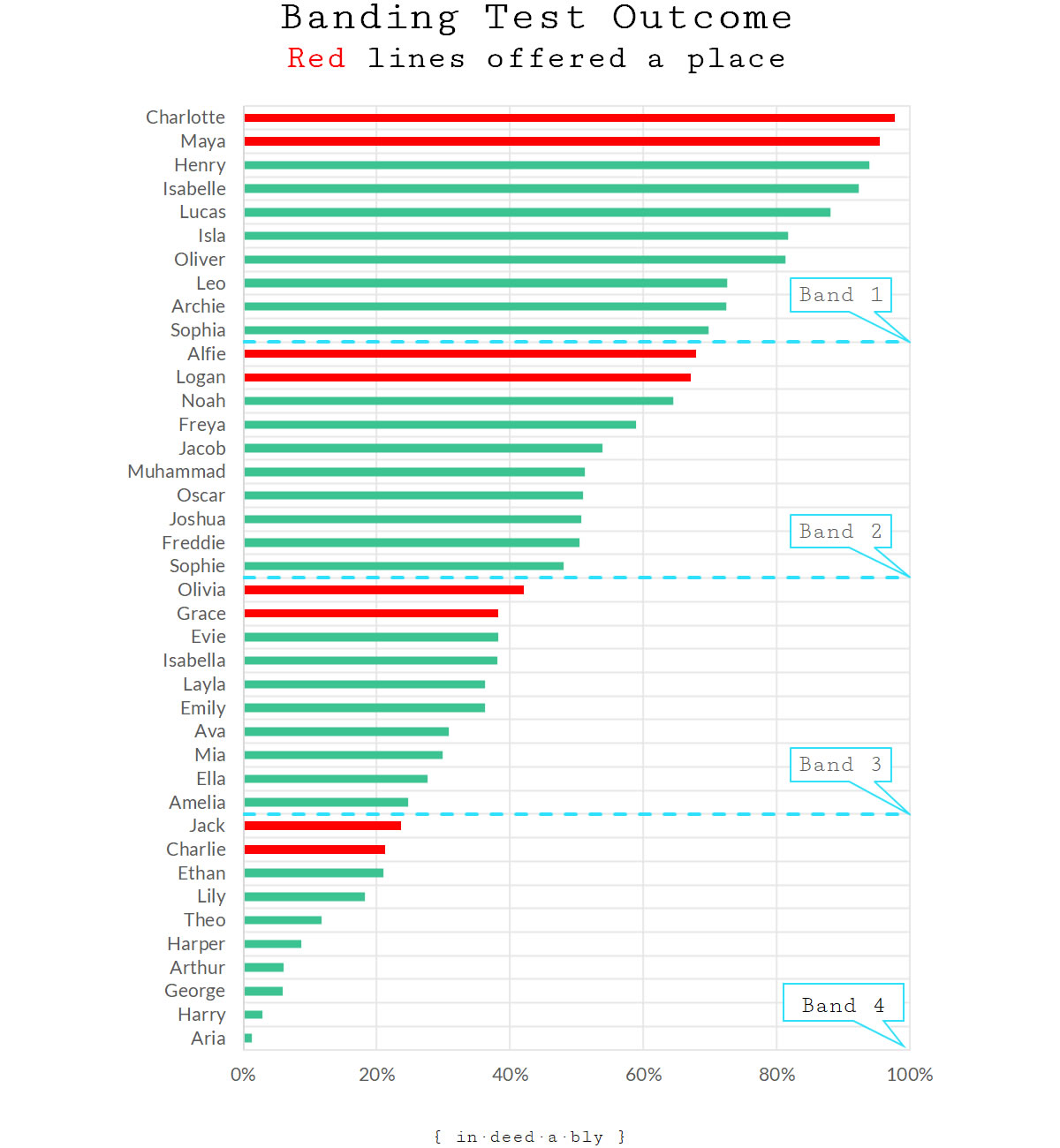 Banding test admissions: Easier to illustrate than explain, and nearly impossible to game.

A preference, not a right

This means that while parents may indeed hold a preference for their child to attend an oversubscribed outstanding free state school, the majority of parents have no certain means of successfully guaranteeing that outcome. No matter how much they try to game the system!

Graduating university does not guarantee financial success in life.

Their chances of success are greatly improved by doing both.

The value of education

Eventually high-quality education, delivered via low cost internet channels such as YouTube and Udemy, will render this ridiculous process redundant.

However until employers begin to recognise that possessing the skills and knowledge required to successfully perform a role matters more than the brand of tertiary institution awarding a degree, parents either jump through these hoops… or just send their kid to the local state school and take their chances, like we did back in my day!