“Will you love him, comfort him, honour, and keep him in sickness and in health, and forsaking all others, be faithful to him as long as you both shall live?“

I was half listening to whatever movie the kids had on. A gravelly voice boomed from the television, delivering this age-old question in the form of a challenge.

Out of nowhere my inner saboteur suddenly spoke up, shouting:

That surprised me. I hadn’t been paying attention to the plot, but judging from the menacing tone and background music I suspect the speaker was a bad guy.

Using a mental trick that has saved my long-married hide on countless occasions, I mentally replayed the last couple of minutes of dialogue I had heard but not paid attention to.

However, that didn’t explain the reaction. My inner saboteur didn’t care about some cartoon. Could it have been referring to the concept of marriage?

I thought about that for a moment.

An institution of increasing irrelevance?

According to Eurostat figures, the concept of marriage has been steadily losing popularity.

Over the last 50 years, the European marriage rate has almost halved.

During the same period, the divorce rate in Europe has more than doubled. The main cause has been the legalisation of divorce in several countries, rather than a sudden epidemic of bad marriages. 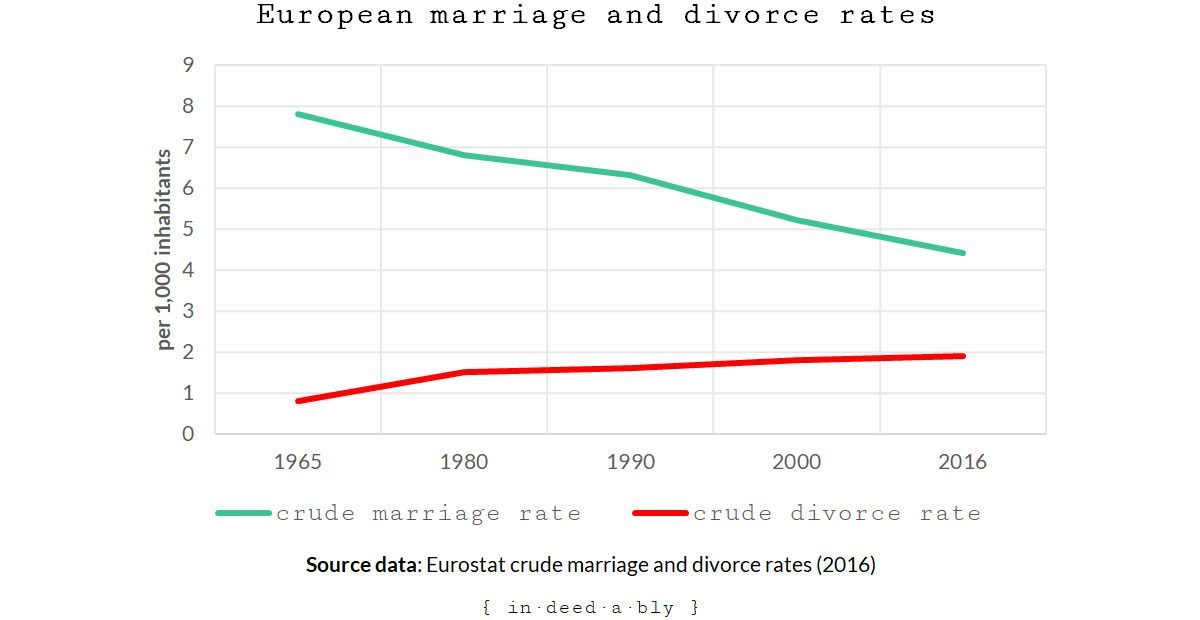 In the United Kingdom 48% of children are now born to unmarried parents. That percentage increases to over 50% in France and Scandinavia. 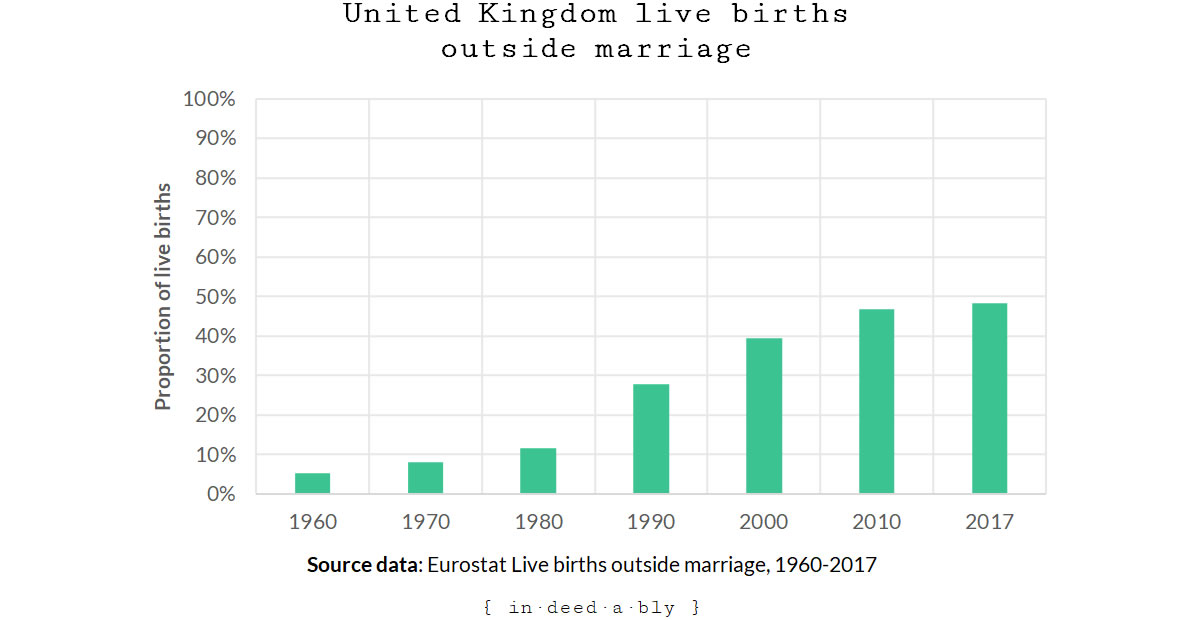 Marriage appears to make most folks who venture into happy. At first.

In England and Wales, 42% of marriages end in divorce. The chart below shows the divorce rate by anniversary year for a selection of cohorts who were married in a given calendar year. 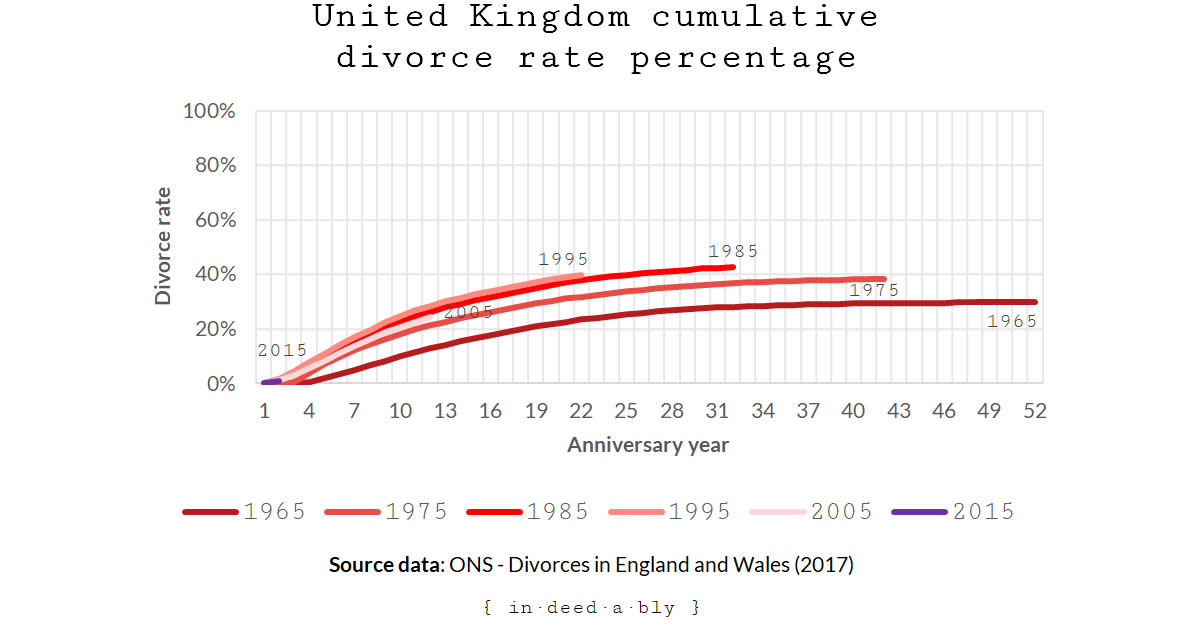 Intuitively the failure rate for relationships in general would be much higher than this. After all, very few of us marry our very first boyfriend or girlfriend.

Doing so would be a risky proposition, potentially establishing a baseline for what is normal or acceptable in a very disturbing place. We are encouraged to thoroughly research and shop around for the best deal on all our major life decisions, ranging from purchasing a house to accepting a job offer.

Marriage should be no different.

I had been reviewing a contract for a prospective client engagement while the kids were watching the movie.

A potentially lucrative, yet demonstrably indecisive, client was seeking to outsource accountability for meeting deadlines while retaining all the control over resourcing allocation. Hardly the recipe for a successful project!

My distracted brain applied the same contract reviewing lens to those marriage vows.

Under the terms of the agreement, you will perform the duties as specified in the statement of work.

Similar to a group project at school, you are obligated to carry the other party if they are unwilling or unable to support themselves.

If you fail to do so, the other party can take you to court, and force the issue. This was the original form of early retirement!

The contract is binding, irrespective of the changing delivery, financial or reputational circumstances of either party.

Failure to comply will represent a breach, for which damages may be sought.

“… and forsaking all others …”

The contract contains a no-compete clause. Supply of goods or services to any other party is prohibited, regardless of how advantageous or profitable the commercial terms may happen to be.

Any work product or intellectual property produced while the contract is in place automatically becomes jointly shared property.

Each party is potentially exposed to unlimited liability for the debts, obligations, or reputational harm incurred by the other party.

In the event the other party declares bankruptcy, you could lose your home or be made to pay for their half of assets that you already access and enjoy.

The contract is binding in perpetuity.

There is no break clause, escape route, or notice period.

No hope of offshoring, outsourcing, subcontracting, or substituting who will fulfil the obligations.

There is nothing in the contract regarding remuneration terms or payment schedules.

Nor does it contain any details about:

Parties would need to go to court to obtain a ruling to exit the contract. If successful, the other party may receive a golden parachute of ongoing support for up to a further five years.

If those marriage vows were offered as a business contract, then no competently prudent and suitably qualified decision maker would ever in good conscience enter into it!

The unlimited liability alone makes it a non-starter.

Even those most famous of unlimited liability contracts, the “Names” at Lloyd’s of London, are no more because they represented the unreasonable level of risk.

The fact that English courts don’t view pre-nuptial agreements as binding should also give pause to loved up couples planning a trip down the aisle.

One of the key parts of any successful client engagement is the realistic management of expectations.

A client who is expecting flying unicorns that excrete rainbows is destined for disappointment.

There is a great deal of wisdom behind the cliché of “under promise and over deliver”.

Unrealistic expectations often lead firms to overpromise just to win the job, leaving them with only bad choices when it comes to delivery.

Deliver at a loss.

Or attempt to renegotiate from a position of weakness.

In my experience, it is better to be realistic and honest. Say what you’ll do. Then do what you’ve said.

Most clients respect this, the approach leading to repeat business. Those who didn’t were invariably more trouble than they were worth, no matter how lucrative the project happened to be.

The only certainty in this onerous contract was that I would get screwed. My inner saboteur piped up again with the wry observation that once married even that outcome was far from certain. Bastard!

Seeking some redeeming features, I wracked my brains for commonly cited benefits of getting hitched.

All of these things are possible. Yet none are guaranteed.

At times they may be available. At others withheld or withdrawn.

Like anything involving human interaction, unpredictability is ever present and seldom rational.

When I cast my eye over that list, there wasn’t anything that couldn’t be provided by an unmarried partner, or even a “friend with benefits”.

With the exception of sex, those benefits can all be reliably found in a close friend.

Was this why Europeans were turning their back on the idea of marriage in ever increasing numbers? Relationship statuses outside of traditional marriage gaining ever-increasing legal equivalence, without the unlimited liability and hefty divorce bill when the relationship runs out of steam?

Marrying for the money

Marrying for money was historically one of the few ways for a “have not” or a social climber to elevate themselves into the lofty ranks of the “haves”. Inequitable and unjust, much like the English public school system, it reflected the harsh realities of the world they lived in.

Whether we realise it or not, many of us practice this method of advancement today.

By availing ourselves of the financial benefits offered to married couples, we enjoy advantages inaccessible to those who have not tied the knot. Cultural traditions encouraged, incentivised, and reinforced via tax inducements and legal protections.

These don’t come from the marriage contract itself, but rather the legal framework society has established around the institution of marriage.

The list below is not exhaustive, but it highlights how the rules are skewed in favour of the married.

By contrast, when an unmarried person dies without a will it is their next of kin, rather than their surviving partner, who generally inherits their estate. The surviving partner can potentially receive nothing at all, and be rendered homeless at the whim of that next of kin.

As ever, when it comes to taxes and law, nothing is ever definitive or straight forward. In every example described above there is nuance and subjectivity, so seek expert guidance before making any commitments that will significantly impact your own life and those who are close to you.

A different way of looking at things

Long ago I watched a Hindu wedding.

At the time I was juggling three jobs around a full-time university course load. One of those jobs was performing hospitality duties at a large licensed club that housed several bars and restaurants. Think a small Grecian themed Las Vegas casino, with plenty of slot machines but no table games.

As far as weddings go, it seemed more like a festival than any I had previously encountered. Hundreds of guests attending wedding-related events over the course of several days.

The bride’s family had deep pockets, but short arms. They had opted to do the reception catering themselves but had no experience serving hundreds of guests. This meant much of the food was cold, oily, and unappetising by the time the waiting staff brought it to the tables.

The most memorable part of the wedding was when some guests actually ordered dial-a-pizza deliveries to their table, during the reception!

Earlier in the day, I had snuck into the back of the ceremony to watch the happy couple get married.

The ceremony concluded with the bride and groom holding hands and circling around a fire.

With each step, they said something to each other.

My Hindi language skills were limited to some animal husbandry insults roared by the combustive sous-chef whenever one of us dropped a plate or messed up an order. I asked the lady standing next to me what the couple was saying.

She tilted her head to the side and listened for a moment, then translated:

“They are making the seven promises. Roughly speaking they are committing to:

Basically to treat each other fairly and work as a team.”

I thought about that for a minute.

It sounded like a good arrangement, promises they actually stood a reasonable chance of keeping as opposed to the well-intentioned but thoroughly unrealistic “love, honour and obey for as long as we both shall live” vows that most of the marriages conducted at the club contained.

“And do they?” I asked. “Treat each other fairly, and work well as a team?”

She shrugged. “Nobody knows. This is an arranged marriage. The bride and groom only met for the first time two days ago”.

Perhaps not such a good arrangement after all.

With such a beginning, holding realistic expectations rather than the promise of fairy tales would be even more important.

Committing to an onerous lifetime contract, with only two days to perform due diligence, sounded like a recipe for a marriage of ultimate doom. No matter how good the tax breaks may be!