“Oooomph” went the 14-year-old the footballer in the purple uniform, as all the air rushed from his lungs. The only female defender drove her shoulder up underneath his rib cage, displaying a technique her older brothers would be proud of.

Simultaneously, a jockey-sized 11-year-old boy cannoned into the footballer’s waist. His drive and momentum sending all three kids toppling towards the muddy ground.

A Tongan born boy, with a playing weight of 115 kilograms, completed the tackle by swan diving on top of the heaving mass of limbs.

A shrill blast of the referee’s whistle cut through the air, immediately followed by a bellowed “what the hell was that?”.

“We tackled the man with the ball” replied the wheezing jockey, as he crawled out from underneath the Tongan.

“This is football you idiot, not a game of rugby!” shouted the purple team’s coach. The throbbing vein on his forehead acted as a warning beacon of an impending aneurysm.

The recipient of the tackle breathlessly gasped and moaned from where he lay in the mud.

Years before, their school principal had decreed that his high school would field a team in every sporting competition, in every age group, that it was able to enter. His general idea had been that by exposing as many kids to as many sports as possible, with a bit of luck a child prodigy would be discovered.

Or failing that, some untapped natural talent would emerge.

That talent should attract attention, which may lead to sponsorships or sporting partnerships. Those would then hopefully bring the school some much needed additional revenue.

In truth it was more of a prayer than strategy. As far as business plans go, it had a few holes:

When the Inter-school Boys Under 15s Football Tournament was announced, the principal was one of the first to enter a team.

Football is an overloaded word

The team was coached by the school’s home economics teacher, who had absolutely no interest in sports.

She had been raised a United States military brat, growing up on bases in seven different countries before she left home for university.

“Football“, as she understood the term, involved wearing helmets and shoulder pads.

However, for reasons nobody seemed able to explain, the locals called that “gridiron” in this country. Besides, the school didn’t have any helmets or shoulder pads, so she was pretty sure “football” meant something else in this tournament.

She had asked her flatmate if he had any football advice to pass on to the team.

In Australia, where the teacher now found herself, depending on where you live, “football” means one of Aussie Rules, Rugby League, or Rugby Union to the locals.

Regardless of the sporting code, a “tackle” involved full body contact and required little in the way of protective equipment.

The flatmate had responded:

Make sure they stay hit.

Don’t hesitate, and don’t hold back.

It sounded like sage advice to the American home economics teacher, the advice could also have applied to “gridiron”.

At the first (and only) training session held for the tournament, only 4 boys turned up.

A recent police operation to stem the local drugs trade had resulted in there being vastly more girls than boys in the school’s 14-year-old age group.

In a verbal spray worthy of the drill sergeants from her youth, the teacher cancelled practice and stormed into the principal’s office. She demanded to know how she was supposed to field a competitive football team when there were only four boys?

While cowering behind his desk from the fearsome verbal onslaught, the principal meekly promised to sort something out. He asked the teacher to simply meet the team at the tournament on the day.

The early morning wind blowing across the football pitch was bitterly cold. The grass was still crisp with frost, and the large mud puddle at the edge of the goal square was a solid sheet of ice.

Seven shivering children from the school shuffled nervously from one foot to the other, waiting for the referee’s whistle to start the first game of the day-long tournament.

Of the 7, only four wore football boots and none had shin pads. The remainder sported a mixture of worn leather school shoes, home brand ugg boots, and cheap trainers.

It would be a gross exaggeration to suggest they had a uniform, or even a consistent colour scheme.

They warily eyed the 11 players on the full strength opposing team. They were nicely kitted out in matching purple shirts, shorts and socks. The name of a successful local car dealership was boldly displayed on each player’s back.

The referee’s whistle blew to start the game. One purple-clad boy tapped the oddly patterned spherical shaped ball to a similarly attired teammate.

The defending team advanced as one, charging towards the boy playing the ball.

There was just one problem.

In a spectacular case of “lost in translation”, the sport being played in the Inter-school Boys Under 15s Football Tournament was what the Australians and Americans call “soccer”.

None of the home economics teacher’s team had ever played soccer!

Most days they played rugby during the lunch break at school, something they ably demonstrated to the poor unfortunate opposing player who was on the receiving end of the tackle.

As the opposition coach helped winded player off the field, the referee quickly ran through the basics:

The home economics teacher addressed her troubled looking team. She may not know anything about football, but she earned her living from being able to successfully manipulate and control overfull classes of angst-ridden moody hormonal teenagers.

Play the man, not the ball.

You may lack the skills and experience to match the other teams, but after that tackle they will all be terrified of you.

The team went on to finish third in the tournament. It wasn’t the win that the school principal had been hoping for, always a big ask when they could only field 7 players in a game intended for teams of 11.

However that first tackle quickly became the stuff of legend.

Word quickly spread throughout the community, and before long the local premiership rugby league team established a youth development partnership with the school.

Each element is equally important, and interdependent. 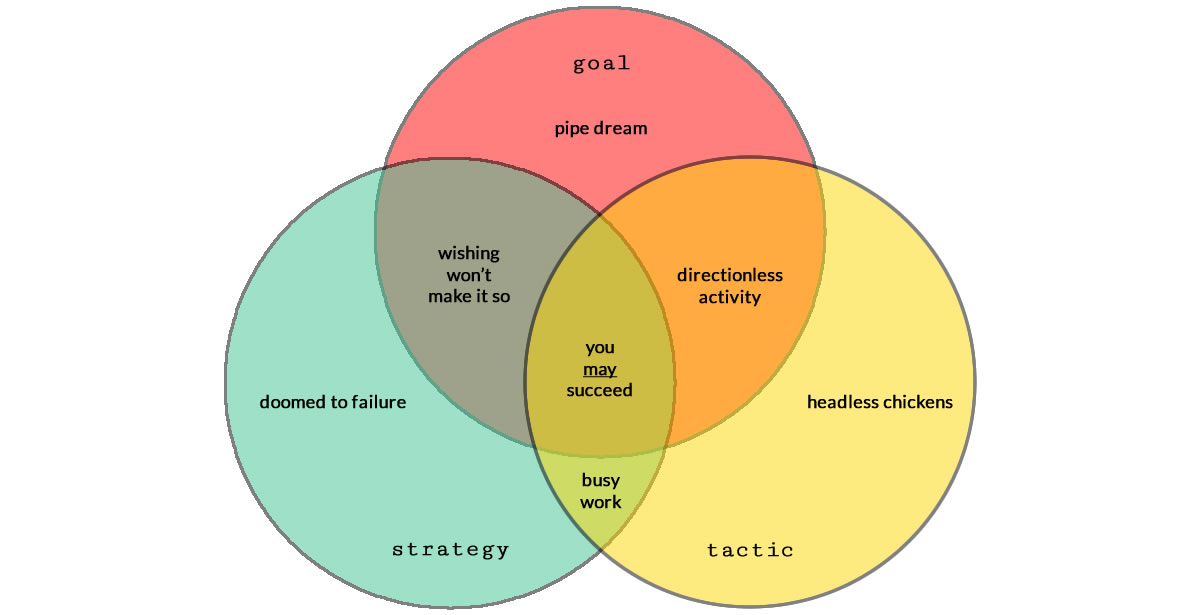 The goal defines the desired outcome. It designates the finishing line. Without a clearly articulated goal, it is impossible to determine whether something has been achieved or successfully completed.

The principal’s goal had been to obtain additional funding for the school.

The teacher’s goal had been to coach a team that got the best out of themselves.

Goals are just empty pipe dreams without a strategy to successfully execute them.

Goals without strategy are pipe dreams.

The strategy sets out the “how” required to achieve the goal’s “what”.

A strategy is not vague.

It is not a wish list of hopes and dreams.

A strategy is not a collection of meaningless corporate doublespeak.

A strategy is like a good story, possessing a clear beginning, a middle, and culminating in a definitive ending.

The principal’s strategy for obtaining the additional funding had been exposing as many children to as many sports as possible. He hoped to discover the next Serena Williams or Ellyse Perry, while attracting sponsorships and corporate partnerships as a result.

The teacher’s strategy had been to take a full squad of 14-year-old boys to a tournament playing a sport they already knew and enjoyed playing. This strategy failed and was abandoned at the first training session.

Strategies that are not aligned to a specific goal are doomed to failure.

Strategy not aligned to goals are doomed to fail.

Tactics are a collection of tools and techniques applied to execute the strategy.

If deployed without a tangible strategy, tactics are just random activities, like the running around of a headless chicken.

Tactics applied without a clear goal in mind can only result in meaningless busy work.

The principal’s tactics included entering the team in the football competition, and making up the numbers of 14-year-old boys with talented 14-year-old girls and younger boys.

The teacher’s tactics involved coaching the team to play a physical style of play, relying upon their reputation for playing rough to mitigate the skills deficit they suffered from.

Many in the Financial Independence community fall into some common traps:

When you think about it, Financial Independence is an enabler, not a goal in itself.

It removes the financial imperative from time allocation decisions.

Depending on how confident the individual is in their sums, it may provide a sense of financial security.

By itself Financial Independence is not an ending, but rather a milestone towards real goals.

Financial Independence is not an ending.

Commonly articulated goals in the FIRE community include:

Achieving Financial Independence may form part of the strategy for achieving those goals.

That said, there usually are many ways to solve a problem, and it is certainly possible to achieve all these goals in some form without being Financially Independent.

Financial Independence is an enabler, not a mandatory requirement.

Another common failing is misaligned strategies.

A common mantra of the Financial Planning community is to maximise contributions into age-restricted pension accounts. This potentially makes a lot of sense for someone wanting to retire around pension age.

However if the individual wants to retire earlier than this, there is potentially a timing issue between when they wish to stop working and when they are able to access their pension funds. The individual’s living costs would need to be funded via alternative means for the duration of this gap, a role previously performed by their salary.

If the bulk of your assets are locked away in your pension and/or your home, then you have a technical problem.

Another commonly promoted strategy is the notion of taking advantage of geographic arbitrage for early retirement, pursuing a “sea change” or “tree change” to a lower cost and more desirable location.

When that location is in a different country, then things start to get complicated.

Pension and tax rules differ markedly between jurisdictions. This potentially makes it difficult to move tax-advantaged funds held in one locale to another. That isn’t a big deal if your former home country has a stable economy and a strong currency. But what if it was Argentina? Or Zimbabwe?… or dare I say it,  (potentially) post-Brexit Britain?

Finally there is the mistaking of tactics for strategy.

Cheap is not the same as value

Coupon clipping and shopping in thrift stores may save a few pennies here and there, but in the scheme of things they won’t make a significant impact on an individual’s pursuit of Financial Independence.

The numbers are just too small to be material.

Thriftiness alone cannot get you to Financial Independence.

Similarly, the pursuit of time-intensive but low-earning “side hustles” may yield a bit of extra pocket money, but unless they provide a great deal of enjoyment then they are largely a suboptimal allocation of time.

The financial rewards achieved by investing that same time in the pursuit of career advancement, professional qualifications, business development, or pursuing additional academic study would likely far surpass that of a “side hustle”.

Many side hustles are false economies.

Now consider whether the pursuit of those goals really needs to wait until you have achieved Financial Independence.

If you’re honest, in the majority of cases the answer will be no they do not.

So what are you waiting for?