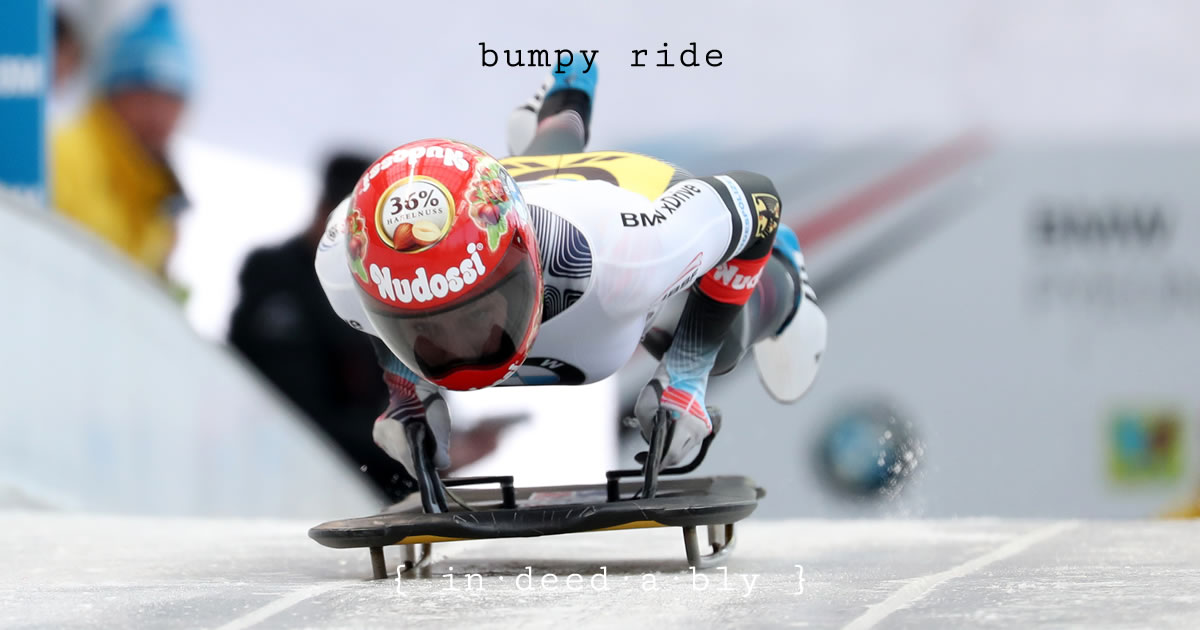 The flight touched down at Stockholm’s Arlanda airport in heavy snow.

Strong winds buffeted the fuselage as the pilots stood on the brakes, attempting to halt the plane’s forward momentum before the rapidly approaching trees at the end of the runway did.

A sudden gust had the plane tilting up on one wheel. The sight out my window of the wing tip skimming the freshly gritted runway was more than a little unsettling.

For what must have been the first time in the history of the world, there was no queue at the “all other passports” window. The airport had been closed to inbound flights after our dicey landing.

The suspiciously cheery immigration official described our plane’s arrival as resembling a drunk person trying to ice skate while blindfolded. It was a specific enough mental image that I no longer need wonder how drunken Swedes entertain themselves during those long winter nights.

With a dramatic flourish, he stamped my passport to mark the early end to his night shift.

A terrifying taxi ride into the city gave me some insight into what it must be like to compete in the Skeleton event at the Winter Olympics. The Kurdish taxi driver drove a rocket-propelled Volvo through a blizzard, ably demonstrating all the safety features of his overpowered vehicle. Should he ever tire of his chosen profession, he definitely had a future as Hollywood stunt driver.

Somewhat shaken, but grateful to be alive, I entered the lobby of Stockholm’s Grand Hotel. A magnificent building with stunning architecture and jaw-dropping prices.

My client was a startup, with a misguided travel policy that insisted staff stay in the very best hotels to demonstrate to the world how flush with cash it must be. This was a lie. Symptomatic of the dubious decision making that eventually saw them hurtle into liquidation like a runaway train.

Ironically, on my final visit to Stockholm for that client many months later, they asked me to stay in a YMCA hostel that was part halfway house/part homeless shelter! How times had changed.

The next morning I stood in the queue at the check-out desk. Patiently waiting as a procession of businessmen, consultants and sales reps sheepishly requested to settle in cash those portions of the bill itemising their adult movie and mini-bar consumption. The glamorous life of the road warrior.

When I reach the front of the line, the clerk slid the printed invoice across the counter and asked how I would like to settle the bill for my mini-suite.

“What do you mean settle?” I asked. “The accommodation was booked through the firm’s travel agency. Don’t you invoice them directly?”

The clerk’s painted on smile didn’t reach her eyes. She politely laughed like I had told a bad joke.

“Unfortunately not, sir. All bills must be settled upon check-out. Perhaps you can claim the cost back on expenses?”

I glanced at number on the huge number at the bottom of the invoice. Did some quick exchange rate maths in my head. Experienced a sinking feeling of impending doom. And some major pucker factor.

The bill for that one night’s accommodation was higher than the rent for my flat. For a whole month!

With a trembling hand, I reluctantly handed over my credit card. Hoping, but far from certain, that the tariff would not breach the card limit.

After a nerve-wracking wait, the transaction finally went through.

There was no banking fraud prevention algorithm intervention to flag a transaction large enough to pay off the national debt of a small Pacific island, occurring in a country I had not previously visited. Those only seem to fire when I purchase groceries at my local Waitrose supermarket.

“Thank you, sir. Have a nice day” chirped the relieved looking clerk.

I headed out to the taxi rank to find a ride to the client’s office. Then thought better of it.

My credit card limit might not have breached by the enormous hotel bill, but there couldn’t have been more than a couple of pounds breathing room left.

I decided to walk. It was only five and a half kilometres. Through the snow.

During the walk, I reflect on my precarious cash flow position. I had just moved into a new flat, requiring the payment of rent and bond upfront. That had consumed all my available cash.

What I hadn’t expected was a “life happens” event occurring, let alone one the size of my hotel bill. Using a credit card limit as a contingency fund had sounded good in theory, but once exhausted it didn’t leave many fallback options.

My coffers would be replenished when the client paid my invoice. However, the standard 45-day payment terms meant I had quite a while to wait before that happened.

it is cashflow, not net worth, that makes you feel wealthy.

Or in my case, broke.

Since that day I have always mitigated risk and reduced exposure by negotiating down payment terms. Everything is negotiable.

For a birthday treat, a bottle of Marks & Spencer £3 supermarket wine. It was surprisingly good!

I was very fortunate that I experienced no further financial misadventures during that period. Had I done so, that brief inconvenience would have swiftly become a major catastrophe.

Much as I try to convince myself otherwise, luck played a huge role in where I found myself then. The same is equally true today.

My experience at the Grand Hotel in Stockholm proved to be a life-changing one.

It caused me to re-evaluate how I viewed money. Cashflow. Wealth. And control.

Up until that moment, I lived much the same way most people do:

After that day I made the conscious decision to separate my lifestyle costs from my income.

All my income was channelled into a single bank account. Dividends. Interest. Rent. Salary

I determined what it cost to live the lifestyle I enjoyed.

Bills got paid automagically via direct debits from the bills account.

Everything else I paid for in cash or via a debit card linked to that account.

There was no budget as such, just an overall spending limit. Large enough that I didn’t need to worry about having enough money on a day to day basis.

After establishing a reasonably sized contingency float, whatever didn’t get transferred into the bills account was immediately invested.

Providing the bills account kept being topped up, my lifestyle was sustained.

This simple approach to cashflow has served me well for 20+ years.

It has allowed me to smooth out the lifestyle impacts that would otherwise be caused by a bumpy earning profile. Half-yearly dividend cycles. Rental property void periods. Stints of semi-retirement.

Over time my investment portfolio grew. At first, predominantly through additional savings. Gradually the compounding of returns accumulated, and capital growth played an increasing role.

As investment cash flows generated by the portfolio increased, the proportion of my lifestyle costs that required financing via the sale of my time reduced.

This paved the way for the seasonal working pattern that I enjoy today.

Eventually it will allow me to stop working altogether, should I choose to.

Having “enough” is only the beginning

Of course, nothing lasts forever.

Very occasionally, a major life event occurs that requires the monthly bills account amount to be permanently adjusted. Some people call this hedonic adaption or lifestyle inflation. I call it real life.

This has occurred only a couple of times, for example the birth of each of my children, or during the recently completed Operation: Gordon.

Hopefully, this story scratches the itch for those readers who have requested I write about money topics more often.

The main reason I don’t is that money itself is a fairly simple problem to solve, with well-documented approaches that will get you to “enough” with a bit of discipline and a lot of patience.

That is neither sexy nor exciting, and is certainly hard to sell, but it is the simple truth.

Where things start to get interesting is how we invest our time once survival and the acquisition money are no longer the main drivers governing our values and behaviours.

A nice luxury, and a fascinating tricky puzzle to solve.