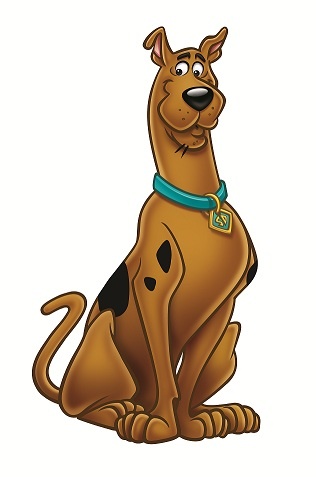 My tongue unspooled like Scooby-Doo eyeing off a sandwich.

My third day at university, and so far I was loving it. The girls in high school were nothing like this!

The next day I strutted into university square with a spring in my step and a smile of on my face. The sun was shining, the birds were singing, and with the naïve innocence of youth I quite fancied my chances at getting lucky.

There was a strangely festive atmosphere, and a crowd of excited onlookers were all gawking towards the pub’s beer garden.

As I got closer I noticed a crowd of guys milling around in their underwear.

Strange, but based on my brief university experience thus far, not entirely without precedent.

Leaning against a nearby table was the blonde from the bar, alongside a couple of other athletic looking women. All three were wearing sports bras, scungies, trainers, and amused expressions.

The rules were simple:

I experienced a faint sinking feeling of impending doom.

Ever the optimist, I wandered over to the girls and said hello.

The blonde barmaid gave me a wry grin, and explained that she and her companions had volunteered to raise money for charity by drumming up entrants to the Undie Run.

She asked if I would be willing to participate?

Casting my eye over the underdressed entrants warming up near the starting line, it was quickly apparent that a pair of tighty whiteys left nowhere to hide those who spent more time in the pub than the gym.

I figured I could probably beat most of them, and as a firm believer in the “if you don’t ask, you don’t get” approach, I asked if the offer still stood?

The blonde gave a mischievous laugh, and assured me if I could keep up then she would honour her promise.

I quickly stripped off, briefly wishing two things while doing so.

First, that I had worn trainers that day, rather than my trusty boots.

Second, that I had made a more optimal wardrobe choice that morning, rather than the old holey pair of fire-engine red novelty boxers emblazoned with “Used Beers Department” across the front.

There was more than a little laughter amongst the crowd as the girls led me to the starting line. I would like to think it was directed at my boxers.

The blonde leaned over and whispered in my ear that she had been the national age champion over both the 800 metres and 1500 metres.

I would love to be able to tell you that I responded with a suitably witty rejoinder. Truth is, I goldfished.

Then the starter’s pistol fired, and we were off!

Sometime later I also completed the event. I finished closer to the front of the field than the back, but it is safe to say the only prize I won that day was for wearing the most embarrassing undies!

Fortunately for me, the newly appointed student newspaper photographer assigned to cover the event was sufficiently distracted by all the eye candy on display, that he forgot to remove the lens cap from his camera.

Even more fortunately, this pinnacle of my athletic career was in the days before camera phones!

University proved to be an entertaining and, for the most part, rewarding experience. I emerged older, wiser, and (slightly) less vulnerable to the wiles of flirtatious blonde in their underwear!

University provided one of the most accessible ways to invest in myself, helping to maximise the value of my time.

It is important to understand both the attributes and limitations that a university graduate generally possesses upon completing a degree.

The real purpose of a university degree

Attaining a degree in an in-demand discipline, awarded by a recognised tertiary brand, assists graduates to land job interviews.

The price of admission to the interview is paid by their academic pedigree, resume, and more often than not their extracurricular interests. Indeed, the field of candidates selected for my first graduate job interview were chosen because they had worked interesting sounding student jobs: a ballerina, a gravedigger, and a photo lab technician!

What happens from that point forward is down to their intelligence, communication skills, and ability to make friends with the folks interviewing them.

once you’re employed, nobody cares

The disheartening truth is that once you land that first graduate job, beyond the fact that you obtained a degree, nobody particularly cares what units you studied or what grades you earned.

This is hardly surprising, it is a continuation of the educational ladder you have been climbing since starting primary school!

Nobody cared what A levels you studied once you got into university.

Nobody cared about your GCSEs once you had some A levels.

Nobody cared about your SATs scores once you made it into high school.

When viewed through the lens of providing a stepping stone towards gaining employment, the question becomes what price is obtaining a university degree actually worth?

The price of a good education

The internet is full of personal finance horror stories where otherwise smart individuals start their working lives encumbered by mortgage-sized student loans. Those individuals then spend the next 5-10 years digging themselves out of a sizeable financial hole before they can make serious inroads towards setting themselves up for financial success.

The chart below displays the annual tuition fees charged by the top 50 universities for locally based domestic to study for an undergraduate degree. Where there was variance in fees between fields of study then the fees for computer science or engineering was selected. 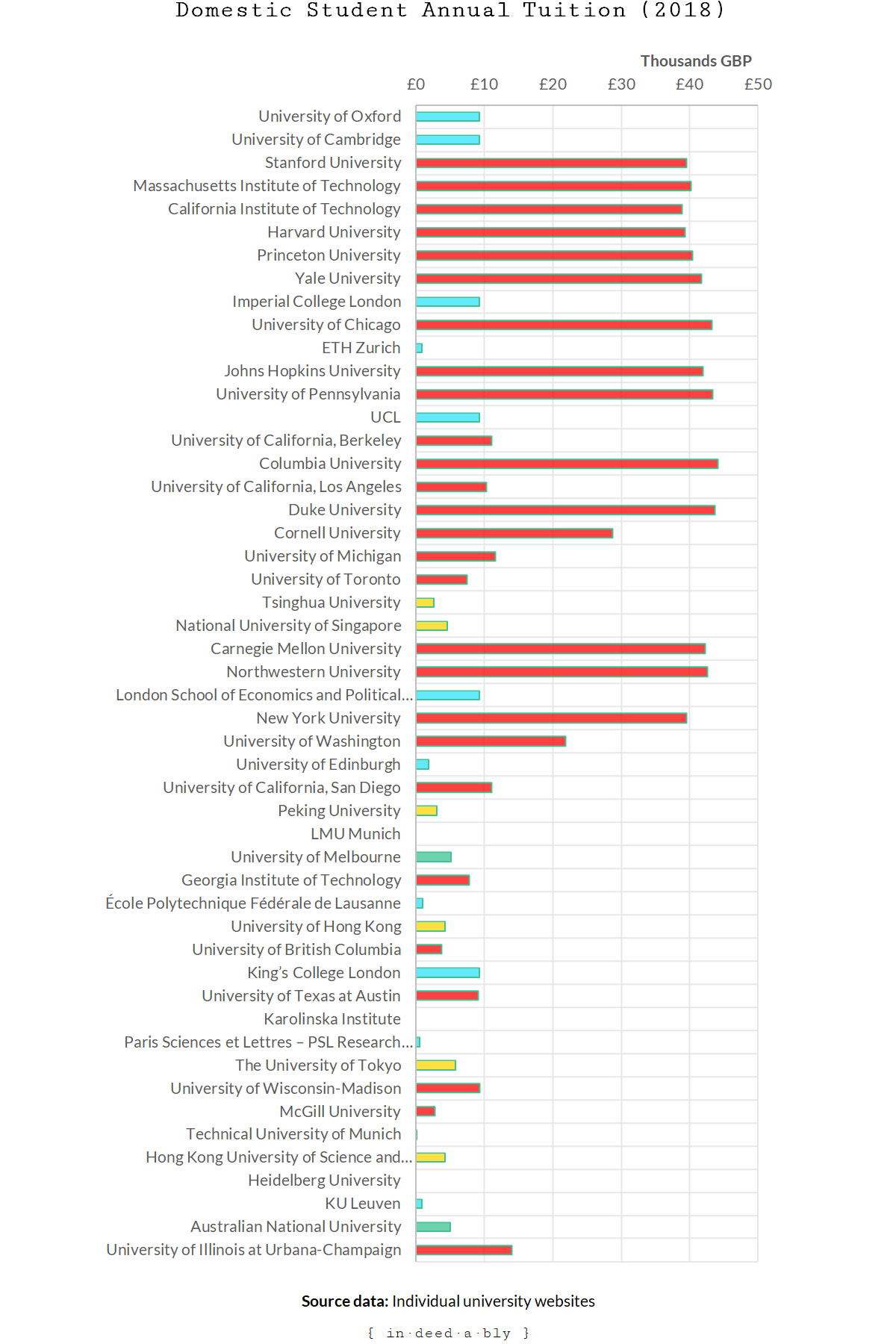 Note these figures do not include the costs of room and board, as regardless of where a student studies they will need to eat and sleep somewhere. They also exclude any bursaries, grants, or scholarships that it may be possible to apply for.

It shows that studying in North American is far more expensive than in Europe, Asia or Oceania.

However there is no rule that says you have to attend a university in your native country.

Competition amongst universities is fierce for international university students, who make up approximately 19% of university enrolments in the United Kingdom, and collectively contributed an estimated £25.8 billion to its economy in 2015 alone.

In many parts of the world universities charge international students higher tuition fees than their domestic classmates.

However there is a geographic arbitrage opportunity available, where even those higher tuition fees faced by international students may still be more cost-effective than the domestic tuition fees charged back home.

The chart below displays the international student annual tuition fees for those same top 50 universities. As was the case previously, the fees were for an undergraduate degree, and where fee variance existed by field of study then computer science or engineering was used. 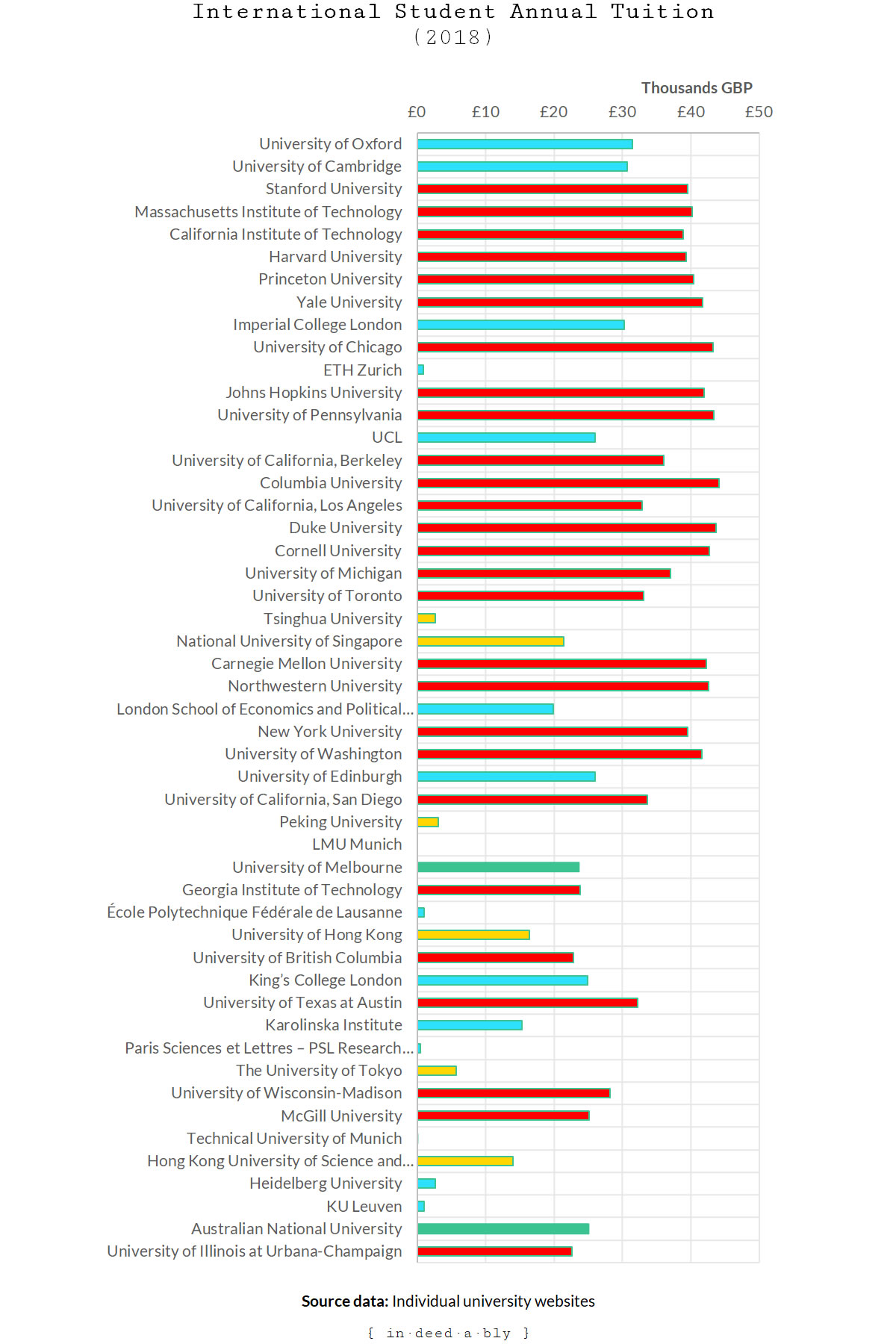 Choosing to study in France, Germany, Switzerland or China could potentially save a university student tens of thousands of pounds over the course of obtaining their degree.

What if I don’t speak another language?

The most obvious obstacle to taking advantage of this geographic arbitrage opportunity is that of language. How many high school students are sufficiently fluent in a second language, that they could successfully undertake a degree in that second language?

However all is not lost. There is an ever increasing number of tertiary institutions around the world offering degrees taught in English. In Germany and the Netherlands alone, in 2017 there are more than 2,000 courses being taught in English. China and Taiwan collectively offered another 635 courses.

The map below illustrates the number of institutions from the top 1,000 global universities offering courses taught in English.

University isn’t a must… but it helps

Of course attending university isn’t the only route towards financial success, and isn’t suited to everyone. It certainly can make it easier however, particularly if you are more inclined to work for someone else rather than take on the entrepreneurial risks associated with working for yourself.

An argument could be made that paying high tuition fees to study in a field that experiences low demand or low salaries is at best an expensive indulgence, and at worst a financial own goal.

Whether university degrees will still be a minimum entry requirement for many careers in the future is an interesting debate.

Just-in-time learning capabilities from the likes of YouTube and Udemy quickly produce semi-capable (if not yet competent) students for a low investment of time and money.

Firms like the Lambda School are adopting a vocational style approach, offering to teach skills for free and then assisting students to gain relevant employment, in return for 17% of their income from their first two years earnings.

This initially sounds like some form of indentured servitude, but given the relatively low salaries enjoyed by graduates, it may actually be a win for many of the students who sign up.

The main take away is that paying high university tuition fees is a conscious choice made willingly.

Alternative options for achieving a similar outcome do exist.

Students (and their parents) just need to step back and challenge the premise under which they are making their tertiary education decisions, to ensure they have considered all the available options, rather than just the most convenient ones.

It didn’t matter which university they attended. What mattered is they paid attention to what was taught, and were able to apply that knowledge to help solve the client’s problems.