The ferry sailed up the Danube at sunset. Scattered orange tinted sunbeams burst through the overcast sky, illuminating the magnificent display of autumn colour amongst the trees lining the riverbank.

As the boat rounded a slight bend the imposing Devín Castle came into view, positioned imposingly on the headland that marks the point where the Morava river meets the Danube. It looked spectacular in the golden light against the backdrop of the overcast Northern sky.

The ship’s captain proudly declared “since the 8th-century Devín Castle has marked the traditional Slovakian border, allowing defenders to stare down any foes from neighbouring Austria. It has never fallen in battle!”

The rumpled old guy seated next to me chortled in amusement. He wryly observed that the Habsburgs conquered much of the world by marriage rather than battle. Their dynastic motto went something along the lines of: “Leave the waging of wars to others! But you, happy Austria, marry; for the realms which Mars awards to others, Venus transfers to you.”

He went on to comment that during the 15th century the border Devín Castle had been built to so valiantly defend shifted hundreds of miles away, where it remained until the Habsburgs lost the first world war.

One of the more interesting stories he talked about involved the performance, or rather lack of performance, of the Austrian stock market since the turn of the 20th century.

In 1900 the Wiener Börse, or Vienna Stock Exchange, accounted for more than 5% of the global market capitalisation. To bring that number to life, proportionately that made it a larger market then than Germany, China, or Australia are today!

At that time Austria was part of the Austro-Hungarian Empire, which had the 5th largest economy in Europe.

Over the course of the next 50 years things went downhill for the Austrians.

They were on the losing team in the first world war, leading to hyperinflation in the early 1920s. Annual consumer price inflation eventually topping out at an eyewateringly high 2,877% in 1922!

Germany annexed Austria in 1938, leading to another lost world war, and roughly 20% of Vienna being destroyed during air raids. Once again there was high inflation, this time topping out at 97% in 1947.

Today the Wiener Börse accounts for less than 0.2% of the global market capitalisation, comparable in size to Qatar or Columbia.

From the start of the 20th century to the end of 2016, the annualised real return of Austrian stocks was just 0.8%! Investors certainly experienced a bumpy ride for that comparatively low return. Performance comparisons over shorter intervals are also underwhelming.

In spite of this, Austrians hold a larger proportion of their net worth in financial investments than the Germans or the Australians. You’ve got to admire their resilience and optimism!

When I queried the old guy about why this was, he shrugged and said people feel comfortable investing close to home, in their local currency, where they understand the rules and regulations.

While the geographic locale may change, this simple investing outlook is readily observed in most markets.

This (often subconscious) preference for the local and familiar influences our investment outlook and asset allocation.

What proportion of the global economy does your home country account for?

According to the World Bank, at the end of 2017 the United Kingdom comprised 3.25% of Gross World Product. 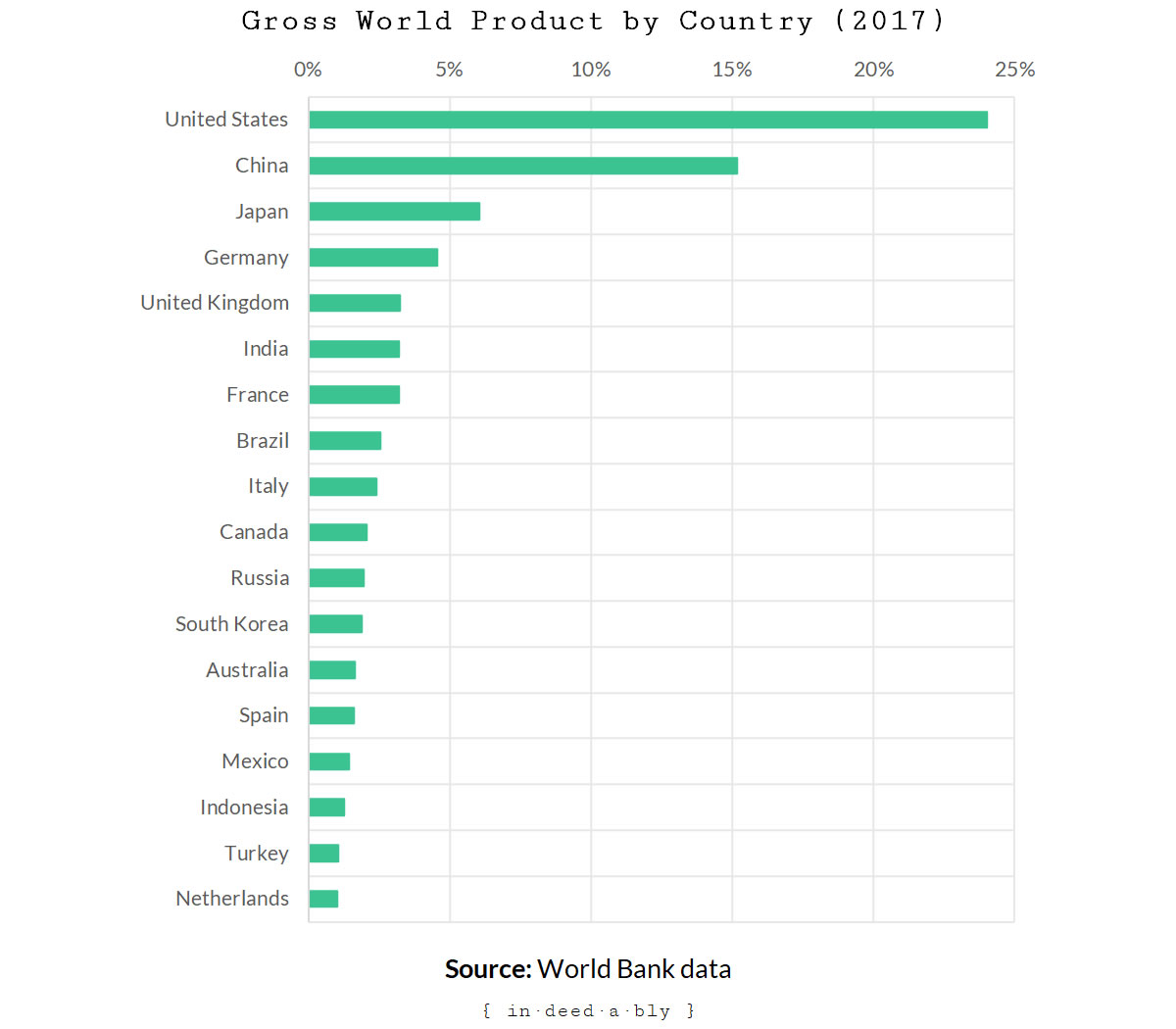 According to the Investment Returns Yearbook, at the end of 2017 the United Kingdom was 6.1% of global share market capitalisation. 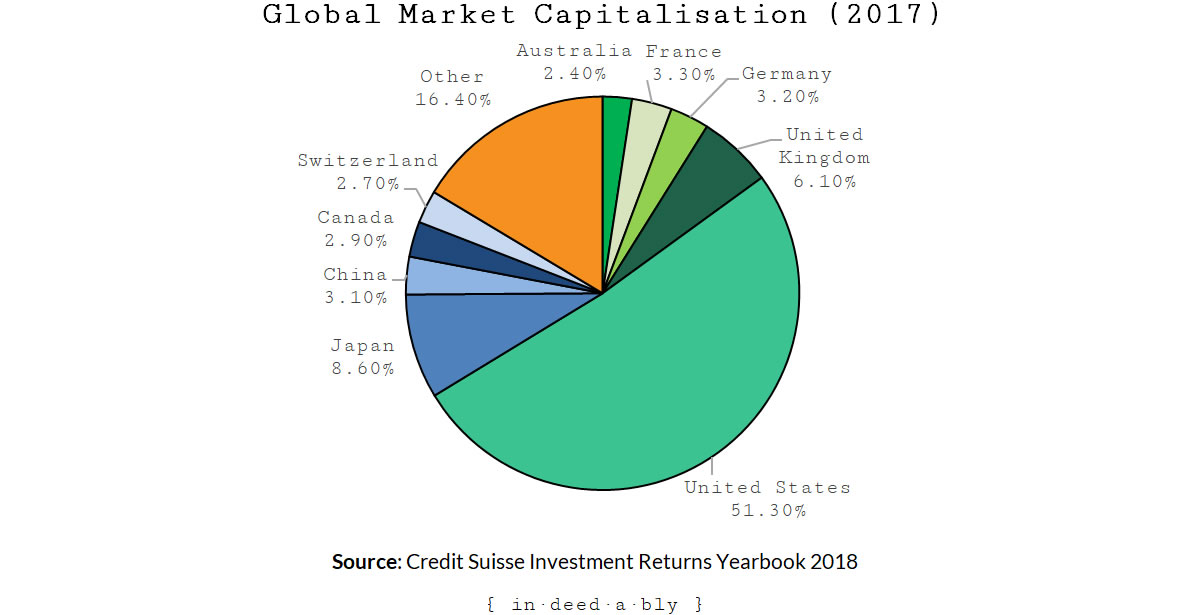 How representative of the global industry sectors is your home market economy?

Consider the composition of the FTSE All World index compared to the FTSE 100.

The United Kingdom is significantly underweight in technology stocks, a sector likely to experience strong growth over the foreseeable future.

In concentrating your investments in your home country, you potentially miss out on exposure to companies based further afield. For example you won’t find technology success stories likes of Amazon, Apple, Google, Facebook and Netflix listed on the London Stock Exchange.

Conversely the United Kingdom is significantly overweight in exposure to the Oil & Gas industry, a sector under threat from renewable energy and climate change concerns.

How concentrated is your home market compared to the outside world?

Dominance of a particular sector by a small number of companies potentially increases the investor’s exposure to risk should one of those dominant companies fail or falter.

To illustrate, the Oil & Gas sector accounts for a 17.2% weighting in the FTSE 100, however that entire weighting is comprised of just two companies!

What proportion of global foreign exchange transactions takes place in your home currency?

According to the Bank of International Settlements, in 2016 the British Pound was used for 12.8% of global foreign exchange transactions. 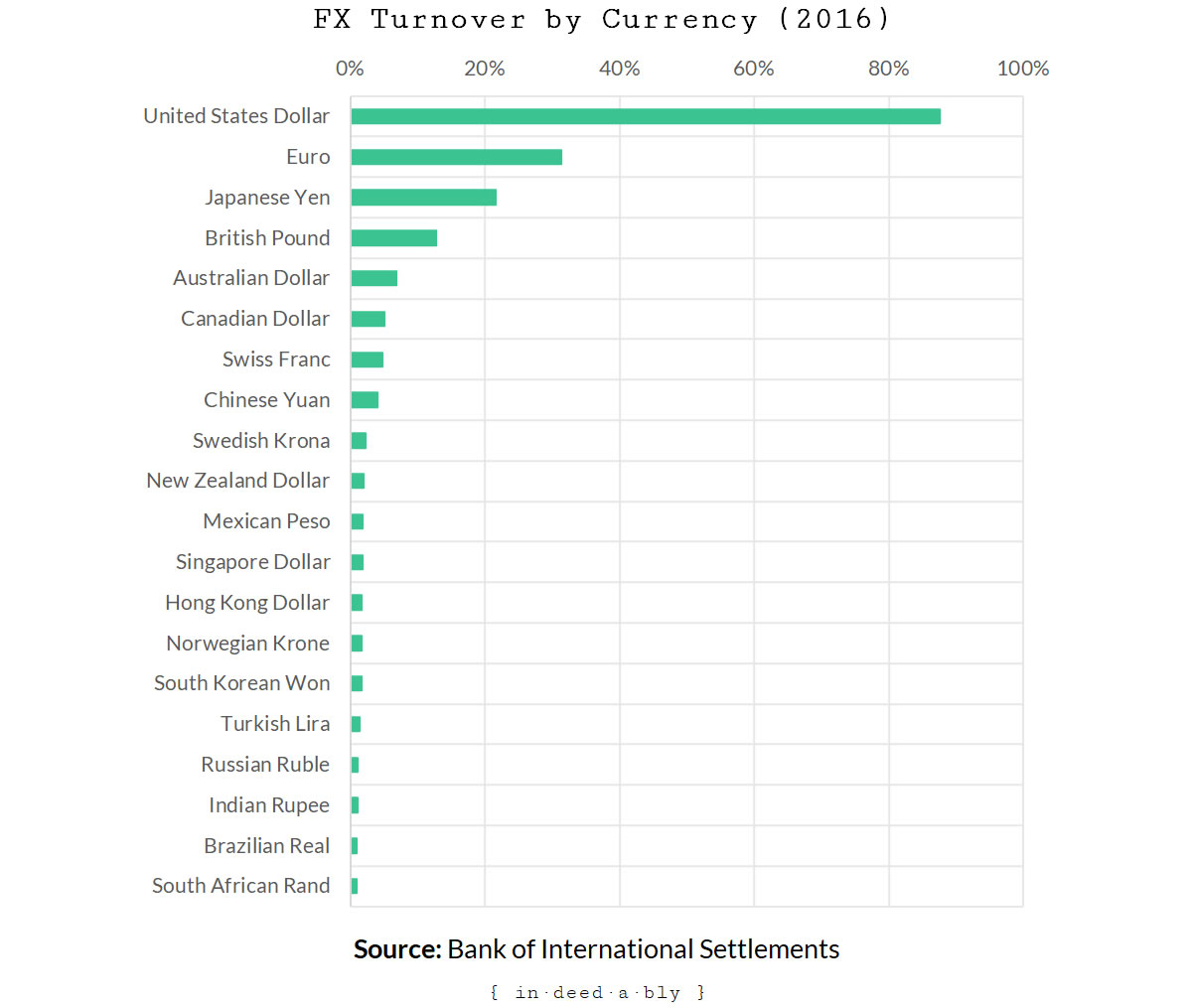 What is the geographic proximity of companies in your home market?

How badly would your home market be impacted by a significant natural disaster or comparable event?

A major earthquake or tsunami that significantly damages infrastructure.

A Twin Towers style terrorist attack that results in major loss of life in a financial district.

A Montserrat experience, where a volcanic eruption resulted in the permanent abandonment of the whole capital city.

According to research performed by City AM in 2014, over half the FTSE 100 companies were headquartered in London.

What proportion of net worth is denominated in your home currency?

The chances are pretty good that your asset allocations will be overweight in favour of your home market and currency.

It is also likely that many of your international holdings are converted back into your home currency for reporting and tax purposes.

How politically stable is your home country?

The Austrians probably thought they were on to a good thing coming into the 20th century, having enjoyed 30 years worth of faster rate of economic growth than Germany, France and the United Kingdom. How things changed!

Following the United Kingdom’s decision to leave the European Union, it faces several years of uncertainty and potential economic disruption.

Next consider the tax regime in your home market.

How competitive are the corporations tax rates?

According to KPMG, in 2018 the United Kingdom corporations tax rate of 19% was well below the global average of 24.03%.

How competitive are the individual income tax rates? 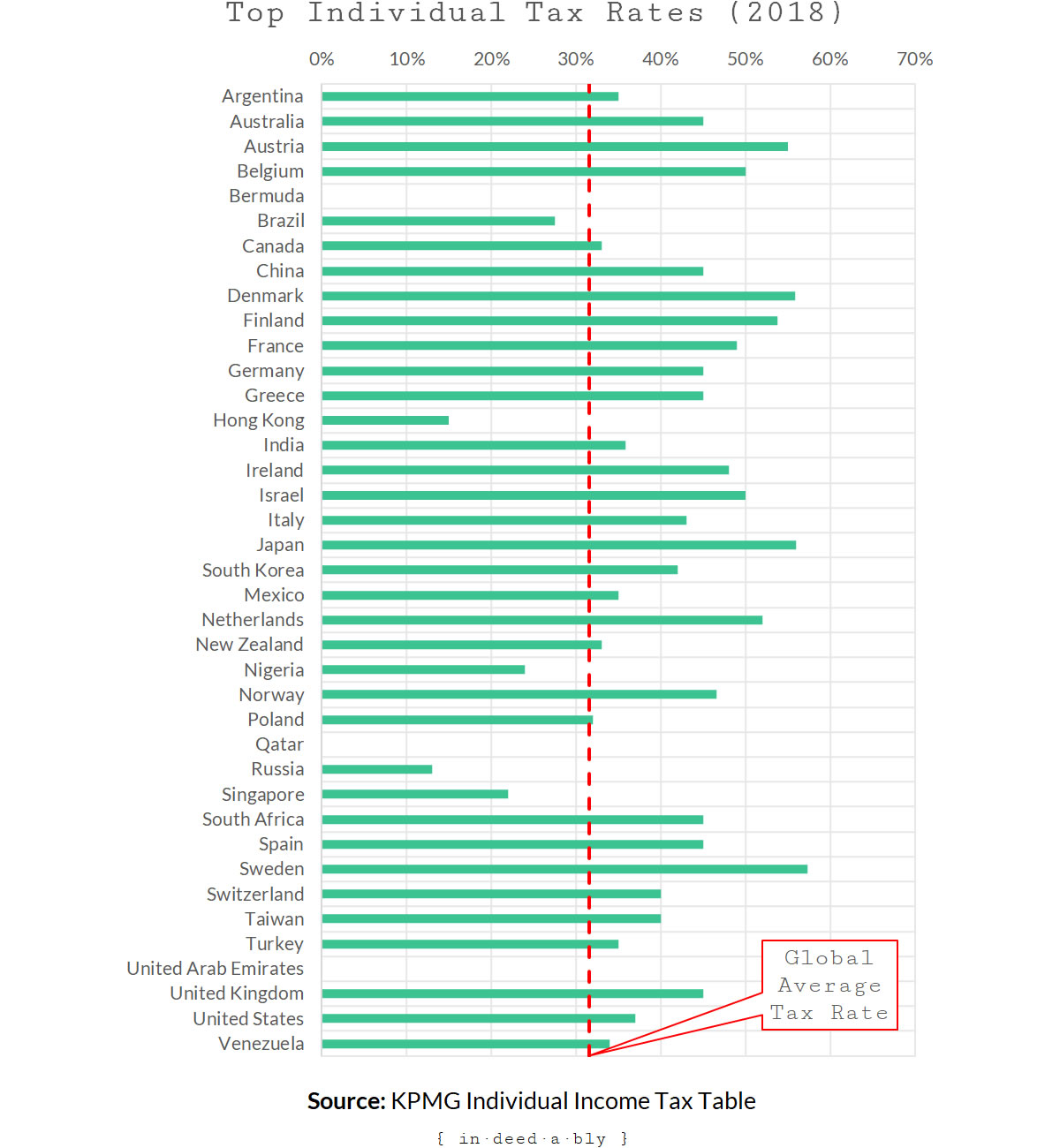 Now consider what you get in return for investing your taxes in your home country government. Do you receive a free primary and secondary education? Free university? Free healthcare? A state pension capable of supporting a reasonable standard of living?

If the answer to some or all of those questions is no, then are your home country tax rates comparatively lower to offset you needing to self-finance those things?

If the answer is still no then it may be worth exploring tax arbitrage opportunities to reduce your tax liabilities. This can be a murky rabbit hole to disappear down, so seek professional advice!

There is nothing inherently wrong with maintaining a home market bias, providing that decision is a conscious and well-informed choice.

However where a home market bias has occurred by accident or without careful consideration then it is potentially very dangerous from a personal finance perspective.

Taking some time to periodically validate the allocation and distribution of your net worth is a worthwhile exercise.

Challenging your reasoning to ensure that it is both logical and aligned to your individual appetite for risk. An unconscious home market bias potentially exposes you to more risk that you may have initially realised.