The story goes that we are free to choose our own path through life, without undue influence or restriction.

Success or failure is largely determined by our own hand and our own decisions.

Society collectively determines what is acceptable. These preferences are enshrined into laws by officials elected to represent our collective interests. They are policed by authorities they empower to enforce them.

The general guiding principle is we are free to make as many bad choices as we like, providing our actions don’t adversely impact or injure others as a result.

“everything before the word ‘but‘ is horse shit”

Our everyday execution of those freedoms is constantly subject to influence and manipulation.

Endless, often conflicting, combinations of the carrot and the stick seek to incentivise or discourage our behaviours.

We are free to choose for ourselves, but it is our nature to follow the path of least resistance. At times we are unwittingly puppets on a string, dancing to the tune of puppet masters.

How many of our decisions are objectively made based solely on our own beliefs and preferences?

How many decisions are at least partially made due to externally applied influence or coercion?

Consider the expectation and obligations associated with gift giving.

My lady wife is a habitual card giver.

She invests vast amounts of time finding the perfect greeting card. Writing a thoughtful message. Usually hand delivering it to the recipient.

Christmas, birthdays, anniversaries, graduations, starting jobs, leaving jobs… whatever the milestone there will be a card. Often accompanied by an equally thoughtful gift.

She also gets mortally offended when people don’t reciprocate. Or when they phone it in with a supermarket greeting card or a gift voucher.

She gets offended often.

By contrast, my brother doesn’t do cards.

Any gift given is the grudging result of a careful evaluation of cost versus fallout from not giving one.

He is rarely offended!

Personally I fall somewhere in the middle of this spectrum.

I rarely do cards, yet happily acknowledge the major life milestones of people I care about.

My preference is to enjoy a nice meal or a drink with someone. I prefer not to give gifts that will add to the clutter of their home, or undermine their diet/exercise goals.

If I’m brutally honest, many of the gifts I give are out of duty or obligation rather than selfless benevolence.

I lack the courage of my brother’s convictions, preferring to avoid the conflict rather than simply ignoring it.

That said, I regularly feature prominently on my lady wife’s “shit list”!

Correlation or causation? You be the judge.

Now let’s move on to one of the biggest decisions a person can make: bringing another life into the world.

Television courtroom dramas teach us that to have done the deed, a protagonist must have had means, motive, and opportunity.

We have the means. Almost all of us are born with the requisite equipment necessary to make a baby.

A somewhat bigger hurdle is the opportunity. Finding somebody who likes us enough to let us make use of that equipment can prove challenging.

The final element of the trilogy is the motive. How much is having kids worth to you?

My old cricket coach used to say “smart people reproduce, idiots breed”. He was usually referring to the four best players in the team, who were brothers yet didn’t own a complete set of kit between them.

Many organised religions encourage their followers to have lots of children. Given many kids inherit their parent’s beliefs, this expands the customer base and grows the brand.

Meanwhile economic realities such as high housing costs, childcare fees, and low wage growth have combined to make having lots of kids an unviable financial decision for many people… even if they wanted them.

Governments also play a major part in influencing this decision.

At one end of the spectrum was China during the “one child policy” years.

Parents were incentivised to have a single child.

Depending on the region they lived in, these dangled carrots included receiving an additional month’s wages every year until the child’s 14th birthday.

If an equivalent incentive was offered in the United Kingdom, the median household would receive incentives worth nearly £28,000 in today’s money.

The stick used to punish parents who had multiple children without permission could be severe.

Parents could be fined up to 50% of their combined annual income every year until the child’s 14th birthday.

The United Kingdom equivalent financial penalty to the median household would have been up to the equivalent of £167,300 in today’s money.

The non-financial penalties were far worse.

The parents could lose their jobs and/or forfeit their land.

Forced abortion and sterilisation were not uncommon in some parts of the country.

Those additional unauthorised children may be ineligible for basic services like education and healthcare.

Given the horrific down sides, you would have to really want it to chance having a multiple child without prior approval.

At the other end of the spectrum is Hungary’s recent policy decision to try and grow their population organically, rather than via immigration.

The government offered married women under the age of 40 an interest-free loan if they promise to have a baby. The value of the loan is worth more than two year’s average household disposable income.

If an equivalent policy were to operate in the United Kingdom this loan would be worth roughly £48,000.

Loan repayments are suspended for three years upon the birth of the baby.

If the woman has a second baby, one-third of the loan principle is forgiven. Repayments are suspended for a further three years.

The family receives housing subsidies worth roughly five times the average household disposable income on the birth of the second child.

The state will also reduce the family’s mortgage principle, a grant worth roughly 4% of the average Budapest home value.

The United Kingdom policy equivalent of those subsidies would be worth more than £135,000.

A third baby would result in the remainder of the loan is forgiven.

The state makes a larger contribution towards the family’s mortgage, worth roughly 16% of the average Budapest home value. 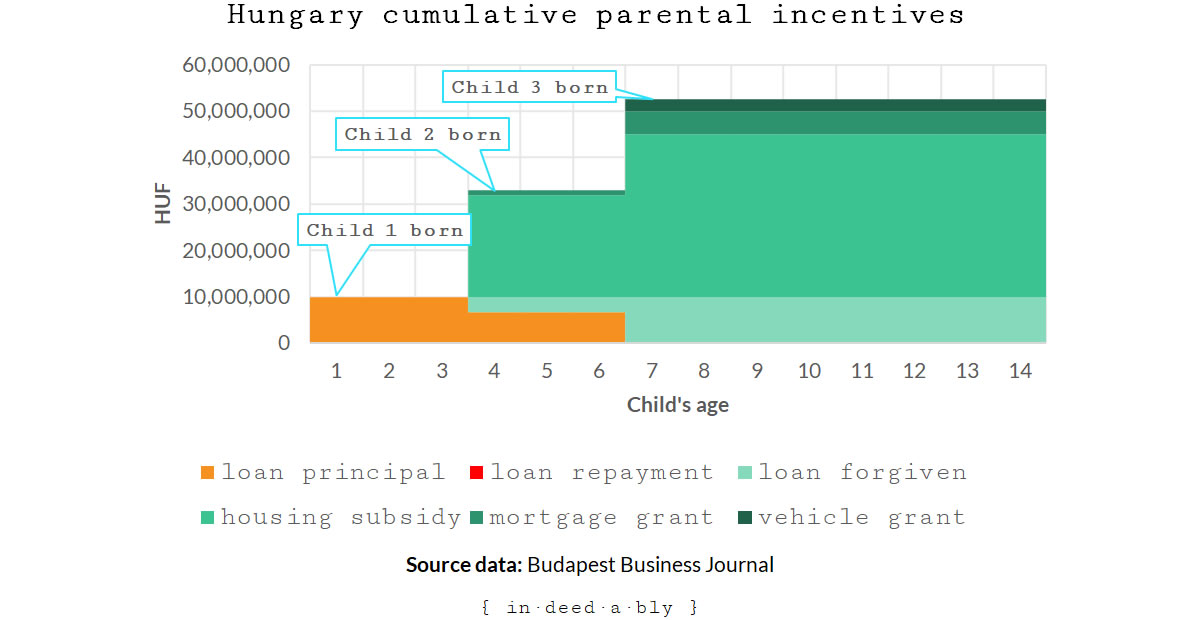 At this point the United Kingdom policy equivalent value of those subsidies would be worth more than £190,000, plus the £48,000 forgiven loan.

If the family had purchased an average value house, then the combined baby incentives would have more than paid for it!

Finally, should the Hungarian woman still be feeling super maternal and give birth to a fourth child, she will be exempt from paying all income tax, for the remainder of her life!

Having children is an expensive undertaking, both financially and in terms of time.

The Hungarian incentives ease some of that financial burden.

By contrast the punitive penalties in the old Chinese system strongly discouraged people from having larger families.

Individuals generally remained free to make their own choices about whether they have children.

Another area where our free choice is heavily manipulated by externalities is property ownership.

In the United Kingdom the government wants people to own their own homes.

A house is the largest investment many people will ever make. It forms a large portion of household wealth for they majority of the population.

On the way in, the government offers a tax-exempt “Lifetime” individual savings account targeted at first home buyers. The government will match 25% of the contributions to these accounts, up to a given annual limit.

On the way out, owner-occupied properties are exempt from capital gains tax.

Yet the government doesn’t want individuals owning lots of property.

Anyone already owning a properties incurs a stamp duty charge of up to 15% of the price of any additional property purchase.

Rental income is taxed at a higher rate than dividends from shares.

A conventional business can deduct financing expenses from revenue before calculating any tax that is due. The same is true of margin lending for stock investments.

When it comes to investment property however, the government is in the process of phasing out the deductibility of financing costs.

Capital gains tax is levied on the sale of investment properties.

Applying this combination of incentive and penalty, the government influences people’s behaviours when it comes to making asset allocation and investment decisions.

Keeping up with the Joneses

The government isn’t the only manipulator when it comes to housing decisions.

Banks and mortgage brokers tell people how much they can borrow based upon their income levels, as opposed to their housing requirements.

For many naïve house-hunters, this borrowing limit defines their budget. Few stop and how much house is actually enough, and whether it is sensible to devote such a large portion of each pay packet towards servicing a home loan.

Much of our perceived social status is derived from where our home is located, how it is decorated, and what model car is parked outside.

There are whole industries dedicated to feeding this status chasing.

Few of these renovation or decorating projects add any financial value to the property. Indeed many are simply expensive vanity exercises, capable of transforming even the most reasonably priced home into a bottomless money pit.

Of course everyone should feel comfortable in their own homes, their safe place to escape from the big bad world.

The question is where each person draws the line between their genuine personal desires versus the influence of puppeteers.

A final example of puppetry at work is aged pensions.

Investing for the future is a prudent undertaking that everyone should pursue.

Enjoy a tax-exempt lump sum, accessible at an arbitrary age.

Yet how many people would voluntarily lock away a huge chunk of their net worth, potentially for decades, if it weren’t for these incentives?

How much of the money currently saved for the future would be consumed today? In the pursuit of those status seeking housing choices, holidays, and other costs of supporting (or inflating) our current lifestyles?

How freely made are your choices?

There is no doubt puppetry is an ever present influencer.

Sometimes it is harmful.

Other times it is for our own good.

The important thing is to be aware of when and how we are being influenced or manipulated.

Only then can we make well informed decisions, that are genuinely our own free will, consistent with our own personal set of values and lifestyle preferences.