Believe it or not, those quotes aren’t sourced from a fraud trial or a report into gross negligence.

Nor were they from a consumer rights watchdog investigation into dodgy financial planning practices.

Alarmingly, it is much worse than that!

These quotes are from the recently published findings of the Australian Government’s independent research and advisory body, who were tasked with “reviewing the efficiency and competitiveness of a superannuation or pension system in its totality”.

Think about the implications of those quotes for a second.

It could be happening to you

A worker suits up and performs a days work.

Maybe they are the guys hauling rolls of carpet up to the 31st floor of Ernő Goldfinger’s Trellick Tower because the lifts are broken. Again.

Or it could be the poor unfortunates who are assembling the scaffolding up the outside of the same building… in the snow.

Perhaps they are a once starry-eyed General Practioner, who now spends their working day rationing their time into 10-minute intervals during which they are expected to correctly diagnose every known malady, while simultaneously humouring attention starved pensions and screening out frequent flyers seeking a medicinal means to cope with an ever more stressful world.

It could even be a corporate spreadsheet jockey who runs a daily gauntlet of office politics, institutional silliness, and meaningless busy work. The redeeming features being a nice salary and the fact that the work is inside, doesn’t involve heavy lifting, or dealing with the general public!

Whatever their role, the worker invests a portion of their hard-earned income in a pension fund.

Partly because saving for the future is a good idea.

Mostly because the government insists that they do so.

They select a fund that syphons off some of their savings via an entry fee on the way in.

A consistent track record is important when evaluating investments.

Unfortunately the worker has chosen a fund that consistently charges high ongoing management fees throughout its life, in return for consistent underperformance.

And for added misery, they receive will receive a kick in the backside on the way out via exit fees.

In short, it sucks to be them!

Perhaps the worker made a poor investment choice.

Or perhaps their employer made a poor choice in selecting a pension provider offering a selected range of expensive and non-performant funds.

Whatever the cause, according to the findings in the pensions report, by the time the worker retires they have potentially missed out on the equivalent of up to 13 years’ wages. To illustrate just how vast that figure is, thirteen years worth of median disposable income would more than pay for a median-priced semi-detached home in any United Kingdom region outside of London!

In Australia, where the report was written, it is compulsory for workers to contribute 9.5% of their salary into a private pension. That rate is scheduled to increase to 12% by 2025.

The mandatory savings are a good idea, and while the size of the contributions remains too low to comfortably finance the retirements of many workers, they are heading in the right direction.

The United Kingdom is pursuing a similar course, but are about 20 years behind.

The Personal Finance blogosphere is rife with assumptions about investment yields and rates of return than an investor can expect to achieve. Yet few of them factor in the impact of fees and taxes, as everyone’s circumstances and tax affairs differ.

Are they describing an evidence based outcome?

Or simply creating a mirage of wishful thinking?

Ignoring these variables creates a danger that investors seeking easy answers may overlook those fees and taxes when performing their own calculations.

For example, how many “safe” withdrawal rate examples have you seen that explicitly account for brokerage fees and taxes in their projections?

Just as the magic of compounding enhances the returns of investors over time, that same magic will magnify the impact of fees and taxes just as effectively.

I decided to validate whether the fees and charges incurred in the United Kingdom would reflect a similar outcome to the findings of the Australian pension industry review.

On the right hand side of each of the following charts I have added a “years’ pay” measure.

The unit of measurement is the United Kingdom median disposable household income, after accounting for household composition.

The chart below shows the annual savings of that hypothetical worker manages to squirrel away. I have chosen the annual stocks and shares ISA limit for each year as an arbitrary annual saving amount. 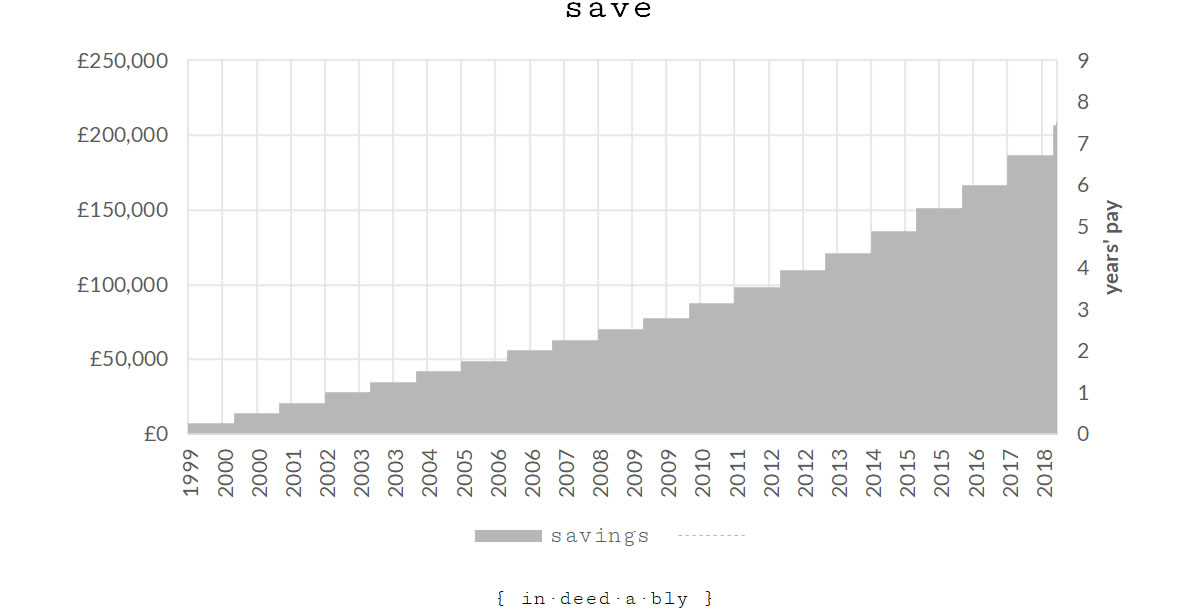 They decide to invest those savings in the S&P500 index, because that is what most of the Personal Finance blogs seem to focus on. 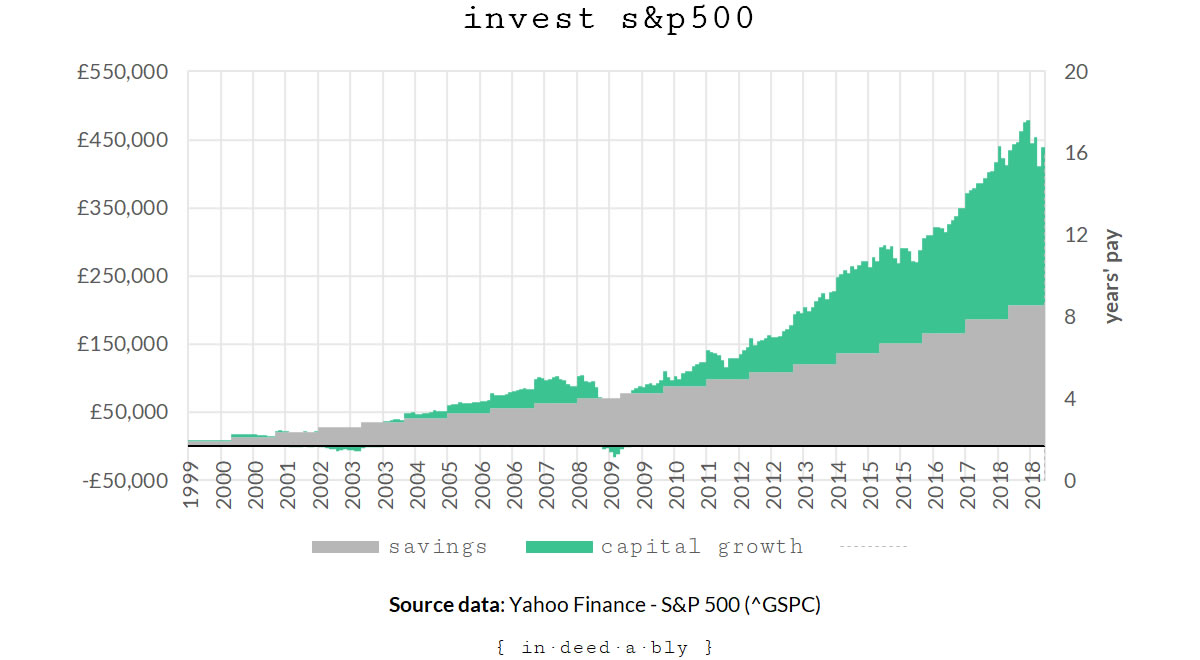 Figuring you can’t have too much of a good thing, the worker elects to reinvest all their dividends. 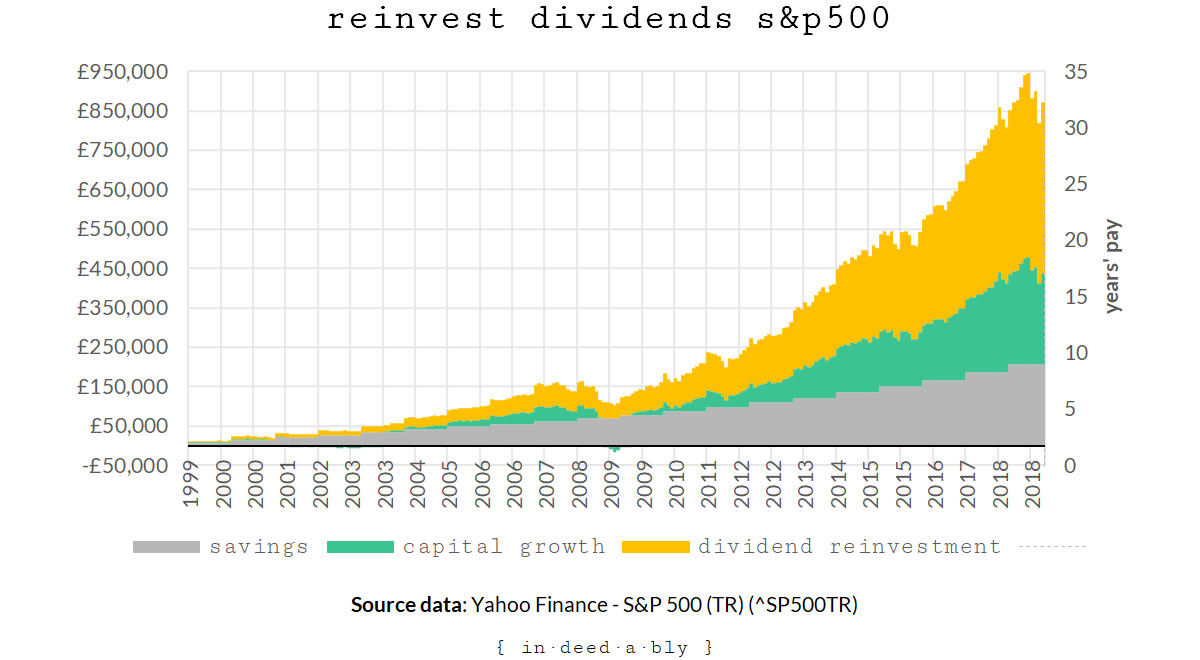 Wait 20 years, and according to the collective wisdom of the Personal Finance blogosphere the worker will be a millionaire or thereabouts!

Not all trackers are created equal

Not all tracker funds are created equal. What if the worker picked a tracker fund that charged a 5% entry fee? 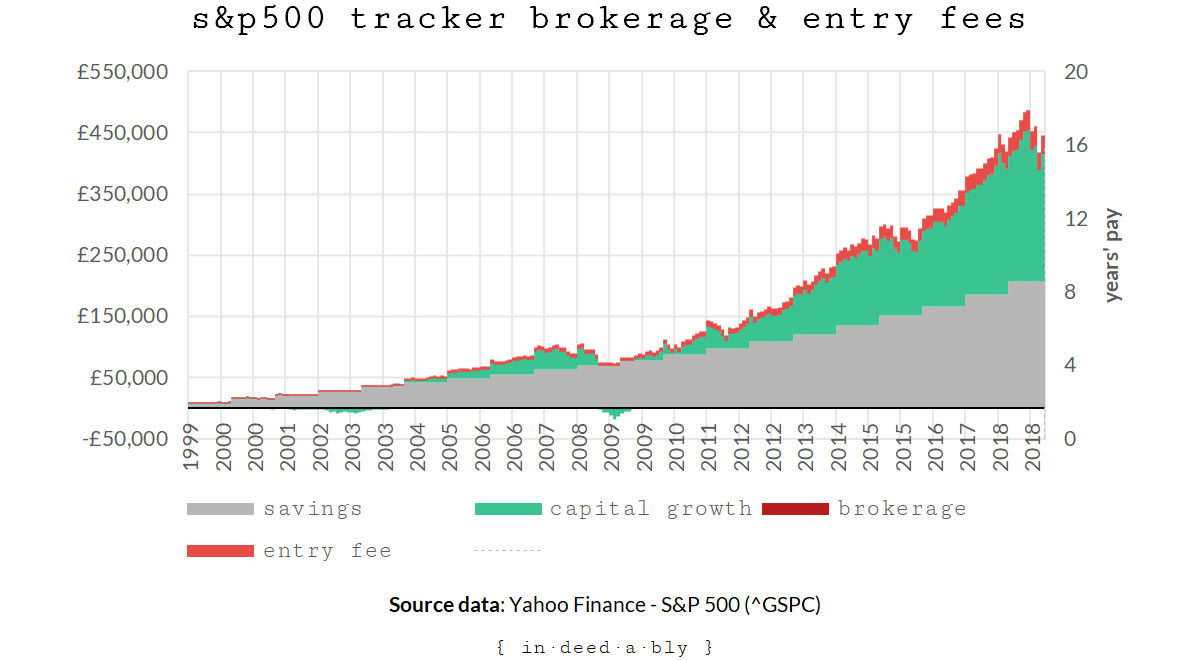 To add insult to injury the fund also charges a high annual ongoing charge of 1.16%.

Think about that for a second. By design the fund the worker chose to invest in will be underperforming the index by more than 6% at the end of the first year! 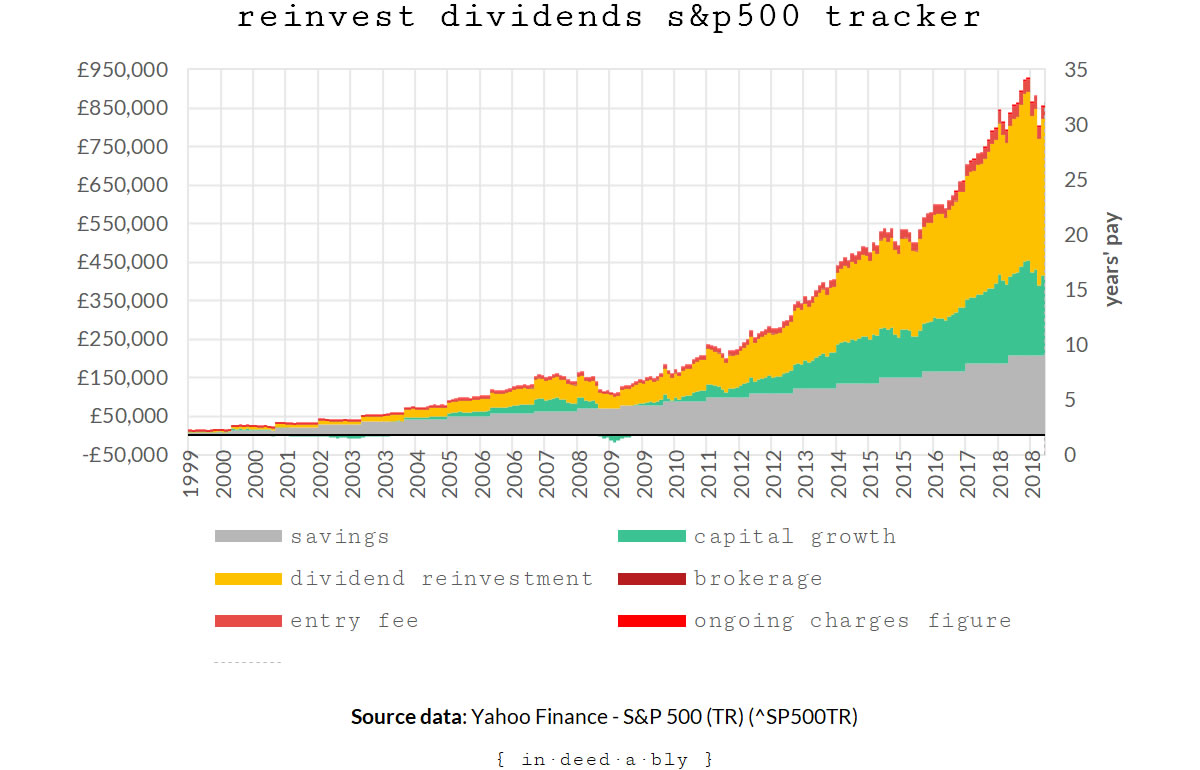 The worker’s stockbroker charges the worker an annual platform fee of 0.45% for the privilege of holding that investment. Some brokers also charge dealing fees. 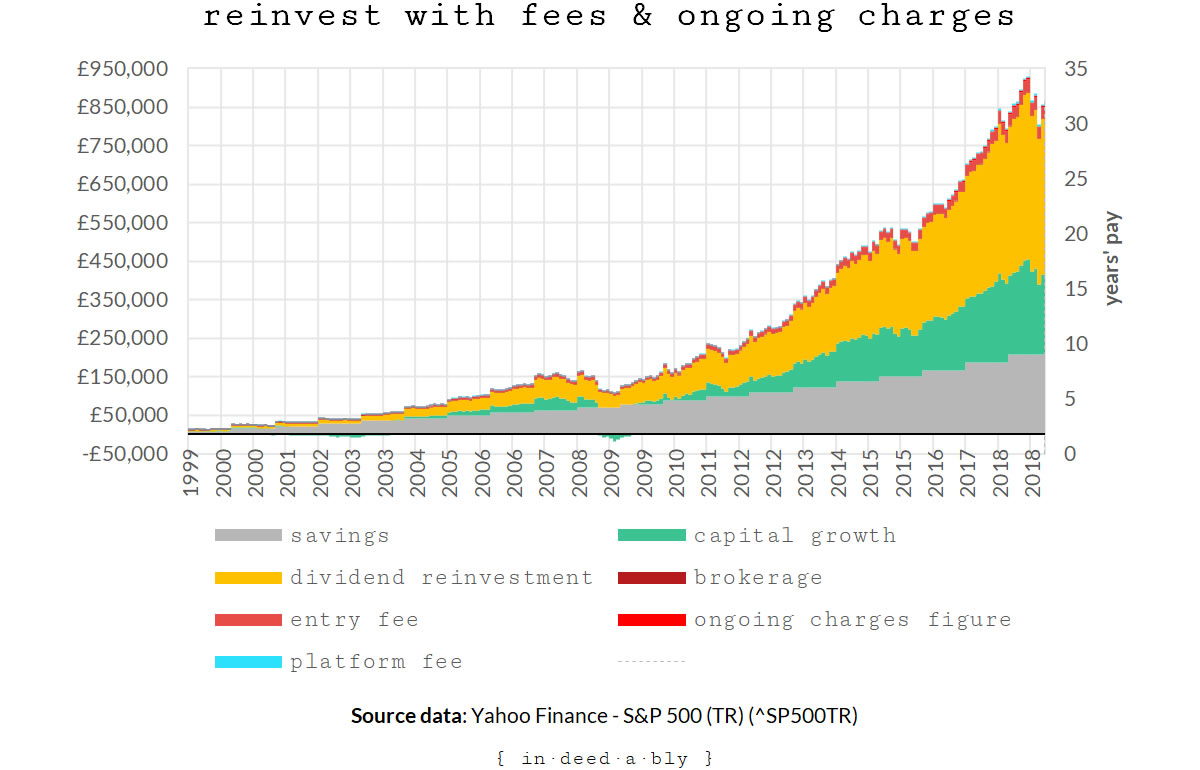 Nobody explained to the worker about the double taxation treaty between the United States and the United Kingdom, so they had never completed a W-8BEN form that relieves them of the obligation to pay the 30% withholding tax which the United States levies on foreign investors. 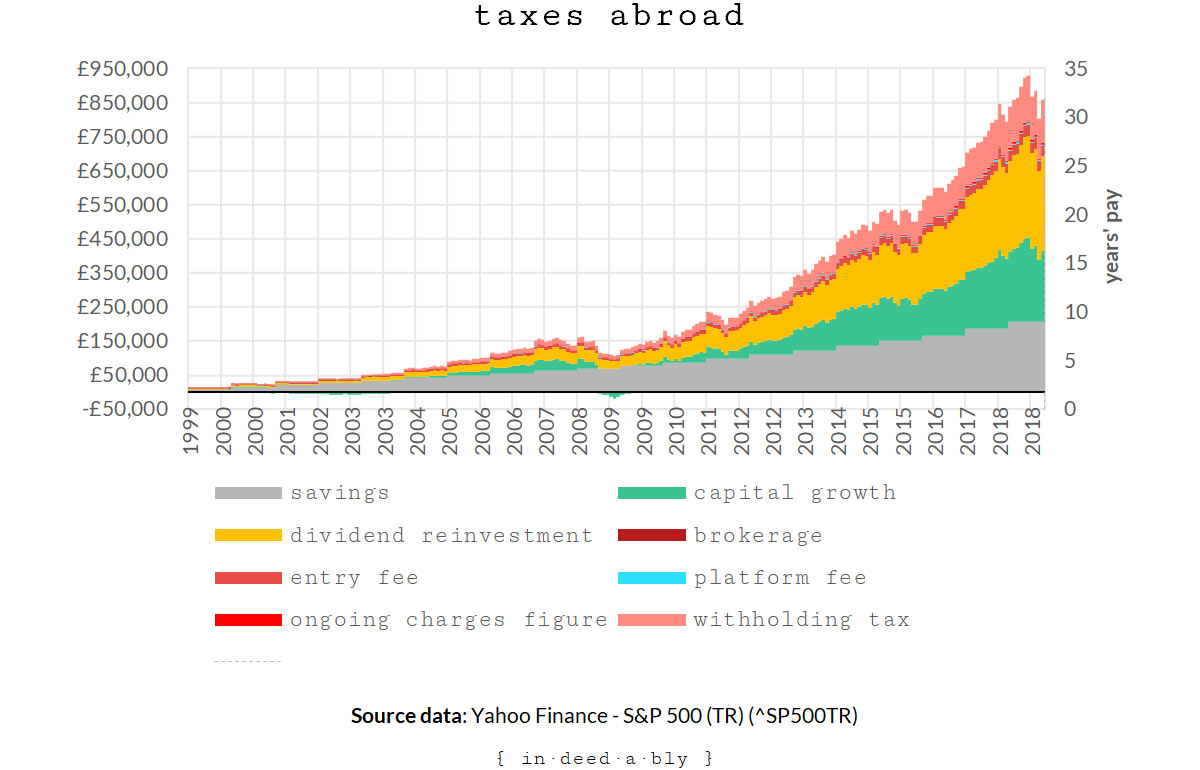 The worker didn’t know about ISAs and didn’t understand about pensions, so they bought the fund using a taxable brokerage account.

Unsurprisingly the British tax authorities wants a cut of those dividends too. The tax man doesn’t care that the worker reinvested them, tax is payable regardless. For the sake of simplicity we will assume the worker was a higher rate taxpayer, liable for 32.5% tax on dividend income. 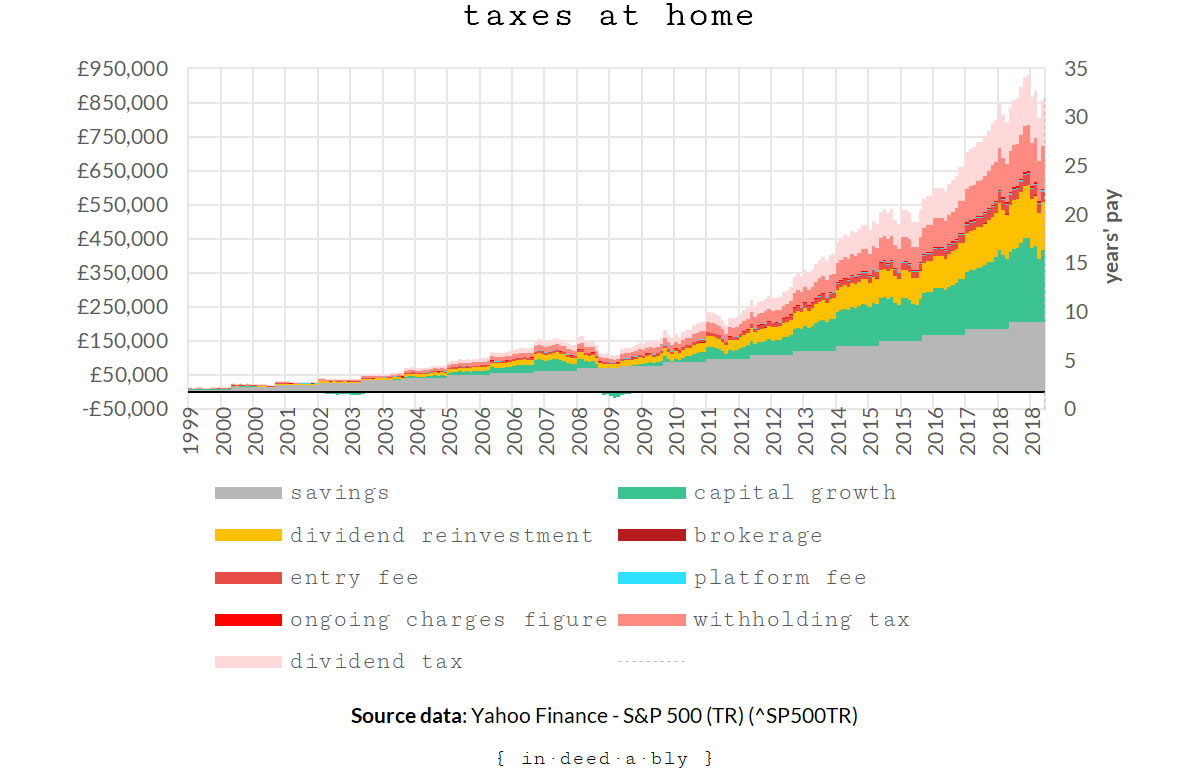 This harsh dose of reality paints a very different outcome to the rose coloured perspective we so often read about. A naïve investor blindly following a simplified narrative using taxable accounts is easily led astray.

If an investor were to do everything wrong, fees and taxes could see them forgo investment returns worth up to 10 years’ pay!

There has to be a better way!

Fortunately there are several things the worker can do to improve their situation.

When combined, these simple steps produce a dramatically improved outcome! 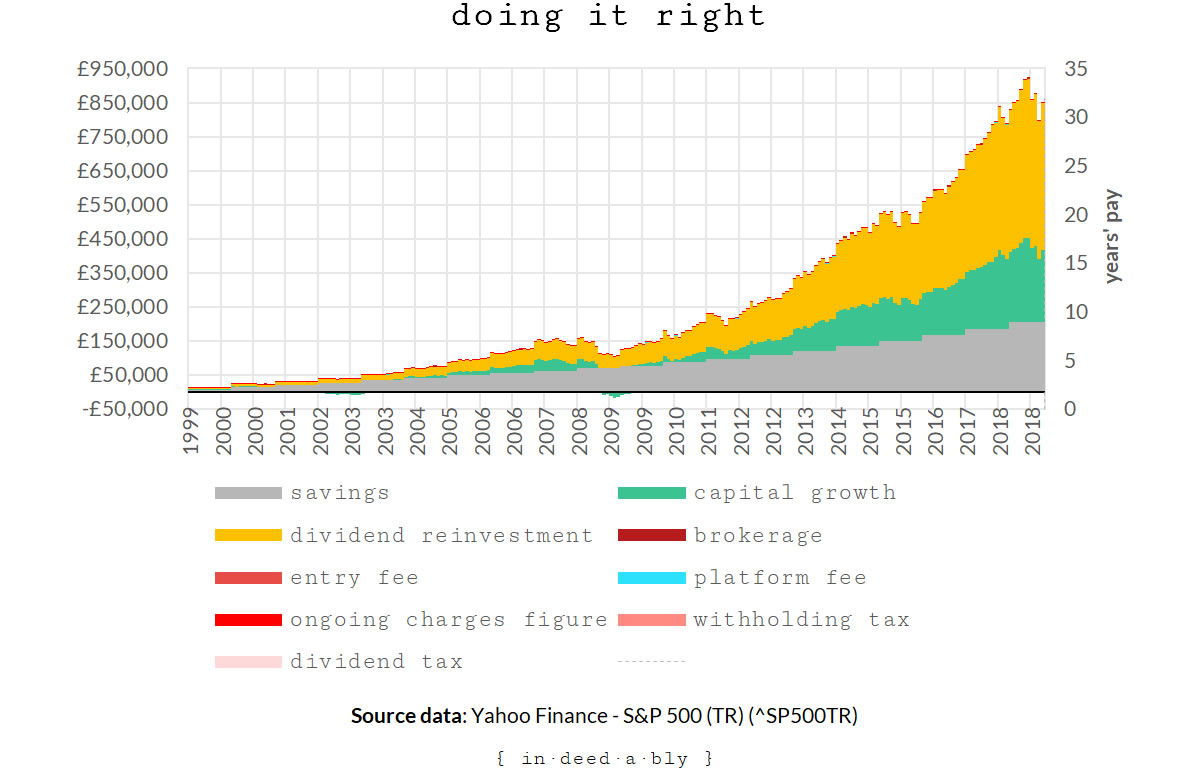 The takeaway here is that making poor investment choices can literally cost you years of your life, requiring you to sell your time for longer than would otherwise have been necessary.

These actions are relatively straight forward in a brokerage account entirely selected and managed by the worker.

Unfortunately many workers rely upon their employer to choose their pension platform and fund selection.

Often these choices are suboptimal.

Of only bad options.

The hypothetical worker used in this example has been spectacularly unfortunate in their investment choices, piling mistake upon mistake.

That would be disappointing had the worker personally made all those choices.

However what if the employer had chosen the brokerage platform and the expensive fund? It is hardly unprecedented for employees of fund operators to have their fund selections restricted to only expensive operated by the firm.

This unfortunate outcome isn’t as farfetched as it may at first sound.

How does the shelf packer at your local supermarket discover the finer points of the US tax code?

Is your immigrant bus driver able to sufficiently decipher the broker comparison tables, to determine which platform is the most cost-effective to host their pension fund?

Would the teachers assistant at your toddler’s nursery meaningfully be able to compare and contrast the fund OCF fees, adjusting for entry and exit charges?

Regardless of their financial literacy levels, all of these people in your local community now have part of their incomes invested into pensions by default.

Employers should owe a duty of care to their employees to ensure they have the most performant and cost-effective pension options available to them.

The government should mandate that default pension options are strong, stable, low-fee index trackers without entrance or exit fees.

The generously tax-advantaged pension system operating in the United Kingdom is ostensibly designed to ease the state pension burden by helping individuals become (at least partially) self-supporting in retirement.

That is a sound policy goal, but this outcome will only be realised if the system is engineered to succeed.

The alternative results in a taxpayer-funded subsidy to the financial services industry, who are free to gorge themselves on compulsory yet ill-directed pension contributions.

There is a lot that can be learned from the Australian experience.

The good, such as the periodically increasing mandatory contributions to pension accounts.

And the bad, such as the astonishing greed and malfeasance demonstrated within their local financial services industry, while the regulators navel-gazed and dithered.