The first snow of the winter arrived this week.

In years past I would have felt a brief burst of childish excitement.

Snow! When you didn’t grow up with it, snow has a certain novelty value.

This year, not so much!

At a little after seven in the evening I found myself walking home along the Thames path.

In a suit and tie.

In the flurries of snow.

The tide was out, and the puddles visible on the exposed muddy river bank were frozen over. Yet the snow wasn’t settling, preferring to melt when it made contact with the ground.

In a display of remarkable indecision worthy of any middle manager, it quickly refroze. The footpath was transformed into an ice rink.

The arrival of the cold weather marks the end of my latest stint of semi-retirement.

For several years now I have chosen to follow a seasonal working pattern.

While the sun is shining I like to play outside and enjoy being a man of leisure.

As the weather turns cold, wet, and windy I seek out a client with a genuinely interesting tricky problem. I then hibernate for the winter in their nice warm offices, helping them solve it.

Sometimes the client engagements and the seasons don’t always align quite as well as I would like, so this may require a bit of flexibility.

I have previously written observations and lessons from semi-retirement, including the fact that decompressing from the daily grind takes longer than you may think.

Today I thought I would write about the opposite end of my seasonal working pattern, the reentry to the working world.

This transition could quite accurately be described as experiencing “compression”! Consider a typical “day in the life” of semi-retired me versus working me. 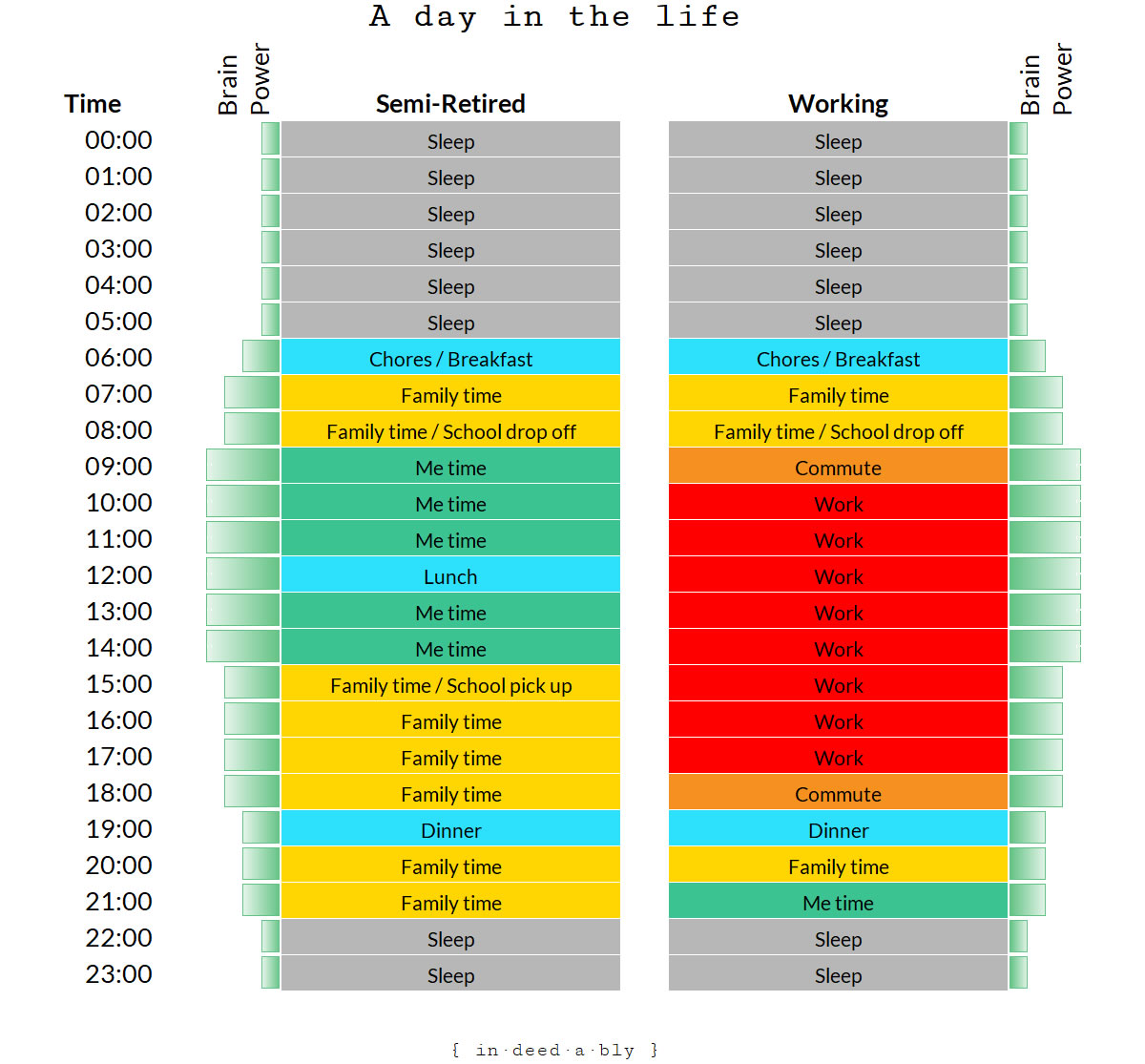 Semi-retired me enjoyed six hours of time to myself every school day, and regularly ate lunch.

Working me gets at best one hour of time to myself on a school day, and trades a lunch break in favour of a late start to accommodate the school drop-offs.

Semi-retired me got to enjoy up to eight hours a day hanging out with my family.

Working me sees them for less than half that amount, employing a nanny to cover the after-school shift.

Semi-retired me was able to invest the hours where I have the most brainpower in fulfilling activities, such as writing blog posts.

Working me invests those same productive hours working for the client. Those fulfilling activities get banished to the late evenings when my batteries are flat and motivation is low.

This “compression” occurs in all facets of working life.

My kids feel shortchanged because they see much less of me.

My hobbies and interests tumble down the priority list.

Scarce time gets triaged in favour of needs over wants. The chores and errands required to keep my family fed, clothed, and happy takes precedence.

Constantly needing to be places at certain times throughout the day creates a somewhat harried sense of being in a rush, running late, and always being aware of the time.

Consciously observing these competing priorities and stressors unfold after an extended absence has been a fascinating, albeit uncomfortable, experience.

The size of that challenge seems to increase with each iteration of semi-retirement.

The sedentary existence of a laptop jockey comes as a rude shock after an extended period being constantly active.

An hour spent (sometimes) sitting on public transport to get to work.

Another hour spent (hopefully) sitting on public transport to get home again.

That is a lot of sitting!

There is a lot of hype surrounding the perceived health benefits of standing desks. However it appears the science fails to live up to the marketing. A recent study that compared energy expenditure of seating versus standing found standing at a desk burned only 8 calories per hour more than sitting at a desk.

Over an 8 hour work day that adds up to just 64 calories, less than a single chocolate digestive biscuit!

The day after you’ve recovered from a cold you don’t really notice the absence of a runny nose or a sore throat. Muscular tension is similarly annoying while you have it, but quickly forgotten when it is gone.

Rigidity across the shoulders.

Increased caffeine consumption, simultaneously compensating for and contributing to the broken sleep cycle.

I didn’t miss any of that when it was gone, and certainly didn’t welcome any of it when it inevitably returned!

My first morning at the new site was spent in an hour-long status update meeting.

Each person took turns to inform the project manager of things they should have already known.

The majority of the discussion fell into the (possibly) “interesting, yet irrelevant” category for all the attendees except for the project manager.

That single meeting consumed the equivalent of 1.25 man-days of combined effort… potentially more had any of the participants bothered preparing for the meeting in advance.

Applying a rough blended staffing cost of £750 per person per day, that meeting cost the organisation more than £1,000 in resourcing costs.

Over the course of a year that unnecessary weekly meeting lightens the wallet of the resource-starved organisation by more than £52,000 per year.

It also consumes more than three man-months of combined effort in aggregate!

All because the project manager, who was already costing the organisation more than £52,000 in wages, is acceptably incompetent at their job.

I have a low boredom threshold, and hate having my time wasted. Therefore badly run meetings have always been a pet peeve of mine.

At my new client site I have already observed the full set of poor meeting behaviours!

I like the sound of the fabled Amazon approach to meetings (though I am yet to meet anyone who has actually witnessed it put into practice):

There are no slides. No informs. No padding out calendars with bullshit meetings to fill in the day.

Over the years I have learned my brain is good for about six hours per day of applied concentration. After that my batteries go flat, my brain power reduces, and my effectiveness declines.

I don’t see this as a problem, and have learned to both accept it and use that knowledge effectively.

Where my client engagements are billed on a time and materials basis, then the contract usually includes vaguely defined term “professional day” as the unit of measurement.

I choose to base that measure on tangible output, rather than time spent at my desk. To me, completing deliverables on time and to a high standard is the mark of success.

completing deliverables on time and to a high standard is the mark of success.

Being busy versus looking busy

This approach has created some waves at times!

If I need to stretch my legs or clear my head I will go outside for a walk.

When my brain is fried, my batteries flat, or my mojo missing I will get up and go home.

Sacrilegious though this may sound, I am yet to encounter a situation in an office environment where a problem genuinely couldn’t wait until the next morning without the business burning down or someone actually dying!

This holds true irrespective of the ambient levels of self-importance present in many workplaces.

Client’s (usually) get used to this approach, once they come to appreciate the difference between being busy and looking busy.

Getting the work done is what matters, the rest is noise.

It is worth observing that as an external service provider, I don’t get involved in office politics or currying favour. Nor am I held to ransom by the lure of an annual bonus or the promise of advancement.

My performance is appraised constantly, in real time.

Success is being allowed back on site the next day.

Getting the work done is what matters, the rest is noise.

I teach my staff what they need to do, then get out of their way and trust them to do it.

They are encouraged them to think for themselves, ask questions (once), listen to the answers, and learn from them.

I don’t care where or when they do their work, providing their deliverables are completed on time and to the same high standards I demand of myself.

Those who can, thrive and grow.

Those who can’t get moved on. Quickly. I have no time for passengers.

It can be brutal at times, but it works.

This approach has made more than a few sponsors and line managers nervous, but has also established a network of very talented people who are good at what they do.

I must confess to being disappointed if an employee sticks around in a job for more than a year or so.

Each role can only teach a finite amount, before the law of diminishing returns kicks in.

A person needs to be challenged in order to continue growing. That may require a move upwards or sideways within an organisation, or changing employers altogether.

The important thing is to grow. The alternative is to stagnate or atrophy, neither of which is appealing.

Déjà vu all over again

I must confess the initial excitement at the prospect of solving a tricky problem over this winter quickly waned.

It happened on morning of day 2, while waiting at the bus stop.

The bus slowed as it approached, indicator turning on. Then the driver switched it off and accelerated past without stopping.

This is something my elder son has regularly complained about, but it was the first time I had experienced it personally. Myself, and the half dozen blazer wearing high school students standing next to me, then had to wait 15 minutes for the next bus to arrive, making me late for a meeting.

It isn’t all bad however.

The appeal of topping up my bank account remains.

So too does the prospect of knocking some rust off my (fortunately still) marketable skillset.

My new colleagues are a friendly bunch, and I’m getting to renew some past acquaintances while learning a new sector.

I do wonder just how many more semi-retirements there will be before one of them becomes permanent.

I suspect that will be something that creeps up on me by stealth, rather than being a conscious decision.

It will be fascinating to see how it plays out!