Many years ago I would sit near the back of a vast lecture theatre and listen to some of the great minds of Economics reluctantly attempt to teach Economics 101 to a vast sea of uncomprehending faces.

The lecturers seldom wanted to be there.

Teaching hours were viewed as an unwelcome distraction from more worthy uses of their time. Academic research. Publish or perish. Subverting or suppressing opposing views as if their very livelihood depended upon it. Because it did!

Many of the students didn’t want to be there.

Their youthful fantasies of helping cure society’s problems, learning to steer corporate giants, writing government policy, or understanding “what happens next” hitting a roadblock of impenetrable jargon and vast oversimplification.

The elasticity of demand. Equilibrium. Indifference curves. Marginal propensity to save. Oligopolies.

Yet Economics 101 was a mandatory subject for all financially or politically orientated degrees, so here sat nearly one thousand bored students.

Sleeping with their eyes open.

Desperately hoping to learn by osmosis as economic theory was delivered in a mind-numbing monotone drone, by lecturers displaying all the enthusiasm of somebody undergoing a tax audit.

A sudden frisson of excitement rippled along the row of seats around me.

A Latin phrase used by economists that roughly translates as “all other things being equal”, which essentially means that if we ignore all the other possible contributors to a change, then it must have been triggered by the variable being currently examined.

High fives and grins were exchanged.

In the third week of lectures, one of the more astute students had realised we were all in deep trouble. Attendance was starting to wane. Tutorial assignments weren’t being submitted. The whole class was in danger of failing.

So she invented a drinking game that required players to attend lectures and pay attention. Every time a lecturer said a variant of “all other things being equal”, the students who noticed could have a drink in the bar after the two-hour-long lecture.

Anyone who has studied economics will tell you that “ceteris paribus” gets said alarmingly often!

Wednesday nights in the university bar quickly became the social highlight of the week, as students came together to celebrate “ceteris paribus”.

More than half the class graduated Economics 101, equipped for successful white-collar careers with a reasonable grasp of economic theory and high-functioning alcoholism.

All other things being equal?

Earlier this week I was on a video conference with a colleague in Boston. For reasons I didn’t entirely understand, he had dialled in from a park bench on Boston Common looking towards the gazebo.

Midway through a conversation about market segmentation and demographics, a homeless guy suddenly loomed over my colleague’s shoulder and photobombed the video conference. He articulately informed us all that at the end of 2019 the first of the Millennial generation will become eligible for the protections of the Age Discrimination in Employment Act. Then he vanished off-camera as quickly as he had appeared.

My colleague goldfished for a moment. The pronouncement had been as random as it was unexpected.

“I think that is the Act which was supposed to prevent employers from discriminating based upon age when making hiring or firing decisions,” he stammered.

Then he paused. Brow furrowing.

“Though I’m pretty sure it actually allows employers to use age discrimination, providing it is in favour of folks aged 40 and over.”

It was our turn to pause. Pondering the irony of legislation that prevented discrimination against one class of people, while simultaneously enshrining into law the ability to discriminate against another class in exactly the same way.

All other things may be equal, but some people are more equal than others.

If the homeless guy was correct, then the much-maligned Millennial generation was about to start turning 40.

For as long as I can remember there have been news stories gnashing teeth and wringing hands about a “housing crisis”. First home buyers priced out of the property market. Tens of thousands more houses needed to be built every year. Homelessness on the rise.

Property, the wealth creation engine of previous generations, was firmly out of reach of young people.

That has become an accepted narrative.

Fanned by vote-buying politicians, who want to be seen to be doing something in the form of ineffective handouts and subsidies.

However, as the pharmaceutical industry or any long term consultant can tell you, there is far more money to be made by persisting a problem than solving it.

That got me thinking: is that narrative actually true?

One thing that always troubled me about economic theory was that ceteris paribus assumption: all other things are equal. It was fine for a theoretical demonstration of a concept in a textbook, but when it comes to real-life when has anything ever been equal?

I decided to dig into the numbers to validate whether the narrative reflected reality.

First I looked into affordability.

That said, buyers would be unwise to fully extend themselves as it leaves them vulnerable to interest rate shocks and facing the risk of negative equity should property prices fall. Taking out a big mortgage is a bit like eating a whole pizza: just because we can doesn’t mean we should.

One of the main factors that determine how much a mortgage lender is willing to offer is earnings multiple. 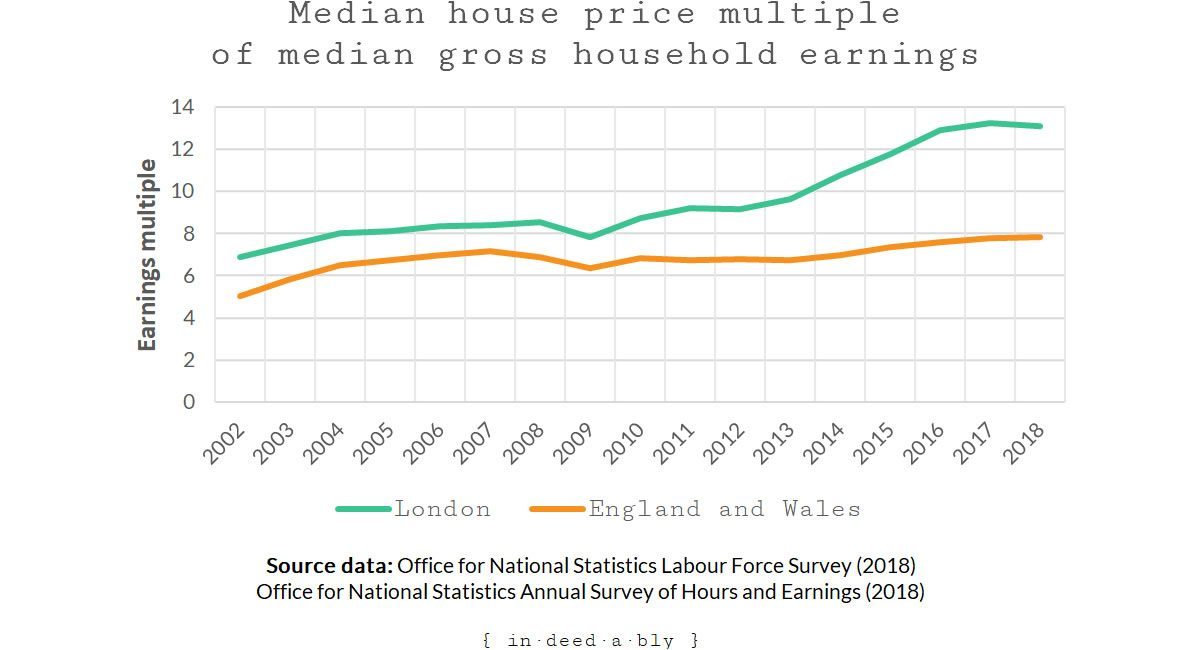 The ONS statistics only go back to 2002, which is a small sample size that does not contain many laps through the property cycle. I hunted around for other datasets that might help explore this story over a longer time series.

Nationwide publishes a home affordability index going back to the early 1980s. The story told is subtly different, as Nationwide uses the house prices paid by buyers ticking the “first home buyer” box on their mortgage application. This means the data excludes remortgages, people moving house, or purchasing investment properties… in other words the majority of property transactions. There is an inherent sampling bias in the property price element, as first home buyers tend to purchase at the cheaper end of the property price spectrum.

On the earnings front, Nationwide chose to use mean individual earnings as the metric to track. For this dataset, the mean tends to be higher than the median, as for every high earning investment banker there are dozens of folks earning minimum wage flipping burgers or stacking shelves. Individual earnings will also differ from gross household earnings, where a household contains multiple income earners.

Now that we understand those important differences, we can see the Nationwide data series tells a broadly similar affordability story. Over time, directly owned residential property as an asset class has become relatively more expensive. 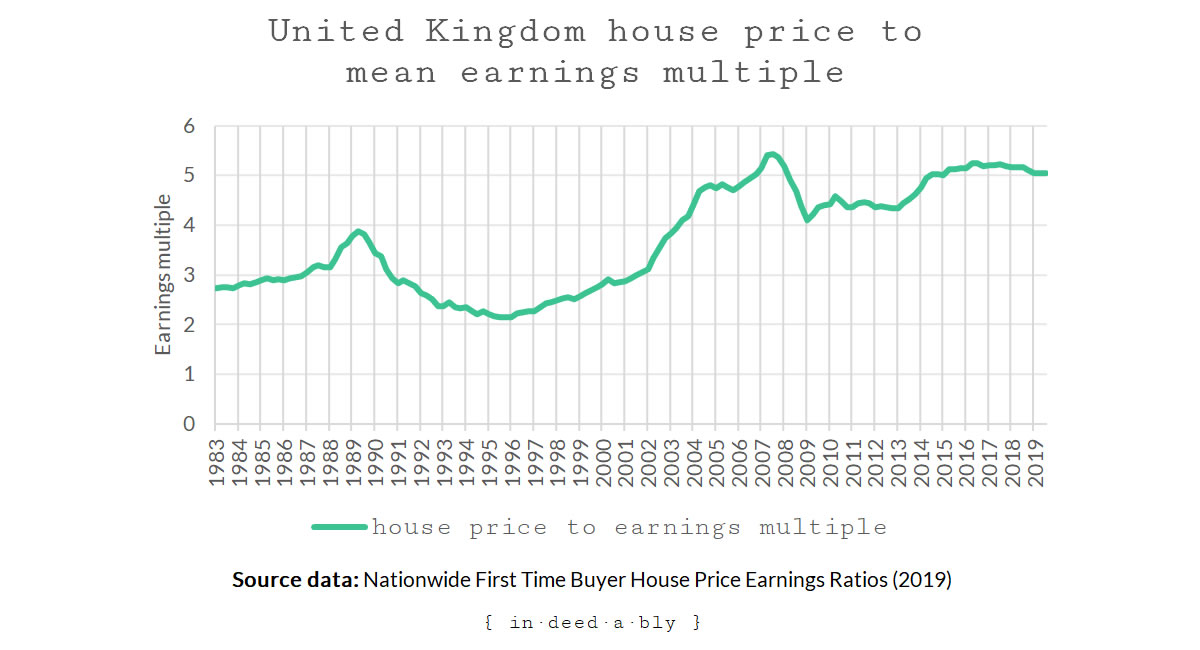 Next, I looked at homeownership rates. If the narrative was correct, then houses had been getting ever more expensive as to be out of reach of median earners. Therefore we should see a corresponding drop in the proportion of the population who are homeowners. This would be a trailing trend, and a slow-moving one, as people tend to buy and sell their homes infrequently. 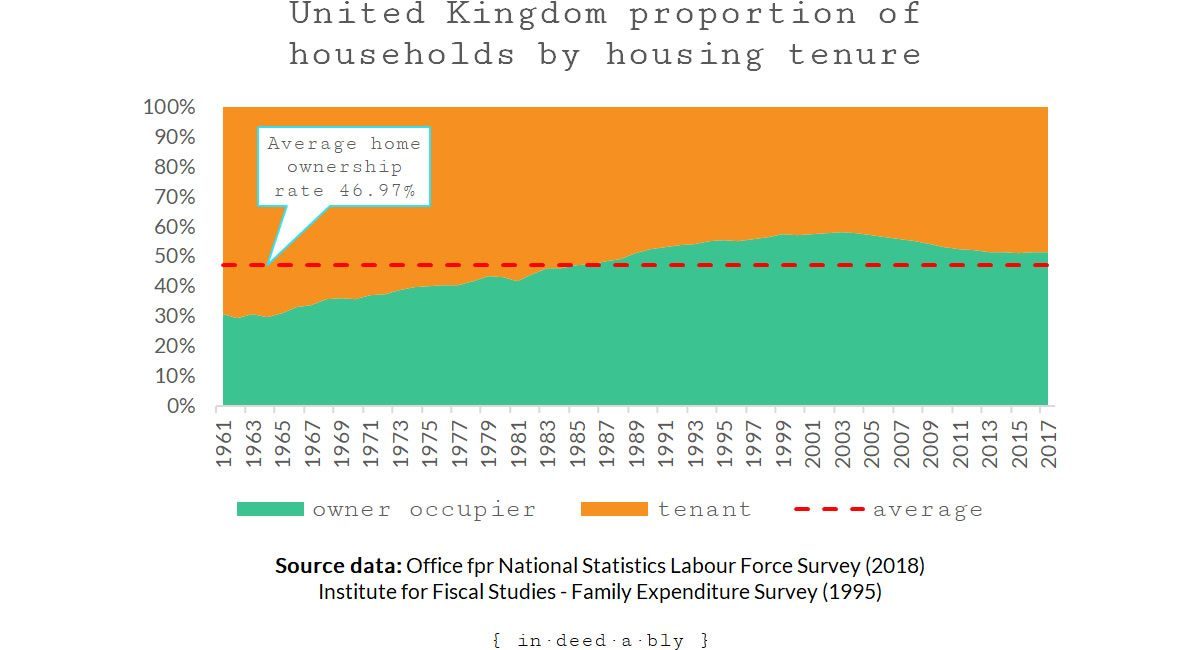 The data appears to tell a different story, with homeownership rates steadily increasing even as prices climbed. How could this be? Were people simply paying what it cost to buy a house, and cutting spending elsewhere to offset those costs? Or was it a byproduct of an ageing population?

I wanted to explore these questions further, to understand what was going on. 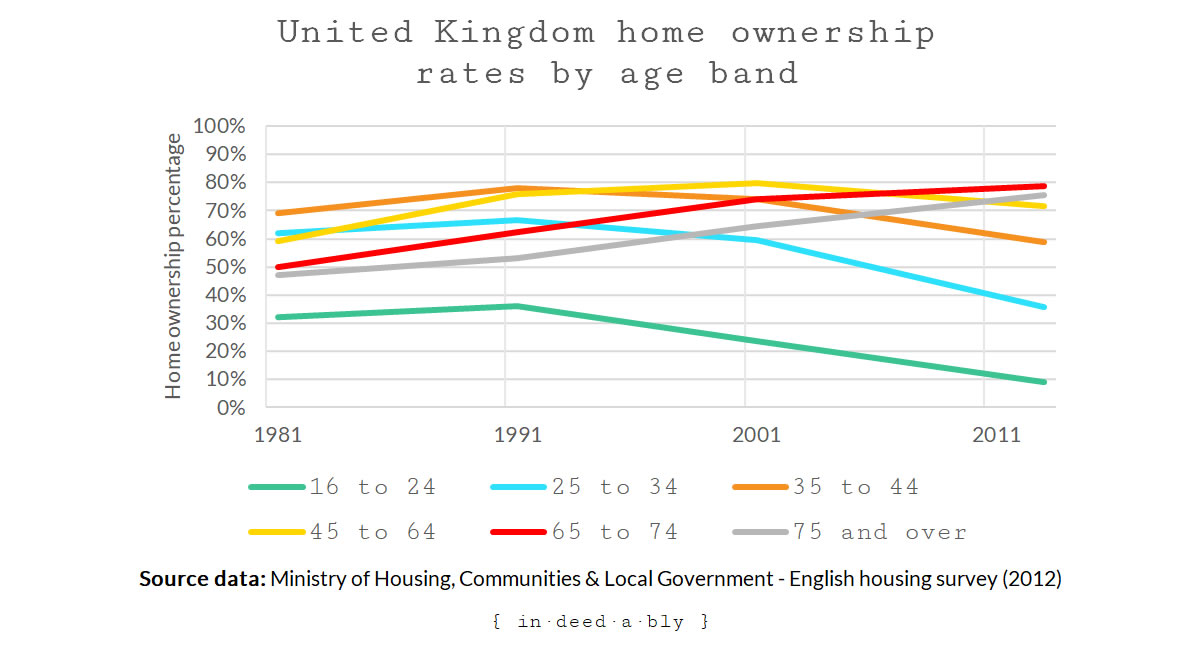 The Ministry of Housing publishes a dataset breaking down homeownership by age band. As the earnings multiple required to purchase a house climbed, the corresponding rate of homeownership in the younger age bands has fallen.

It is taking people longer to get on the property ladder than in previous generations. That delay has a double whammy effect of having to pay higher prices, while simultaneously missing out on the wealth generated by those same rising property prices.

The chart also shows that only those aged 35 and above are more likely than not to own their own home.

Think about that for a moment.

We are currently experiencing some of the lowest interest rates in recorded history, and have been doing so for the last decade. Yet today housing costs comprise nearly 20% of household expenditures. More than a few folks are going to experience a whole world of pain and cash flow distress whenever interest rates revert to the long term historical average.

The final chart highlights the role that property plays in wealth creation. By the time folks are reaching state pension age, their home typically accounts for around one-third of their wealth. 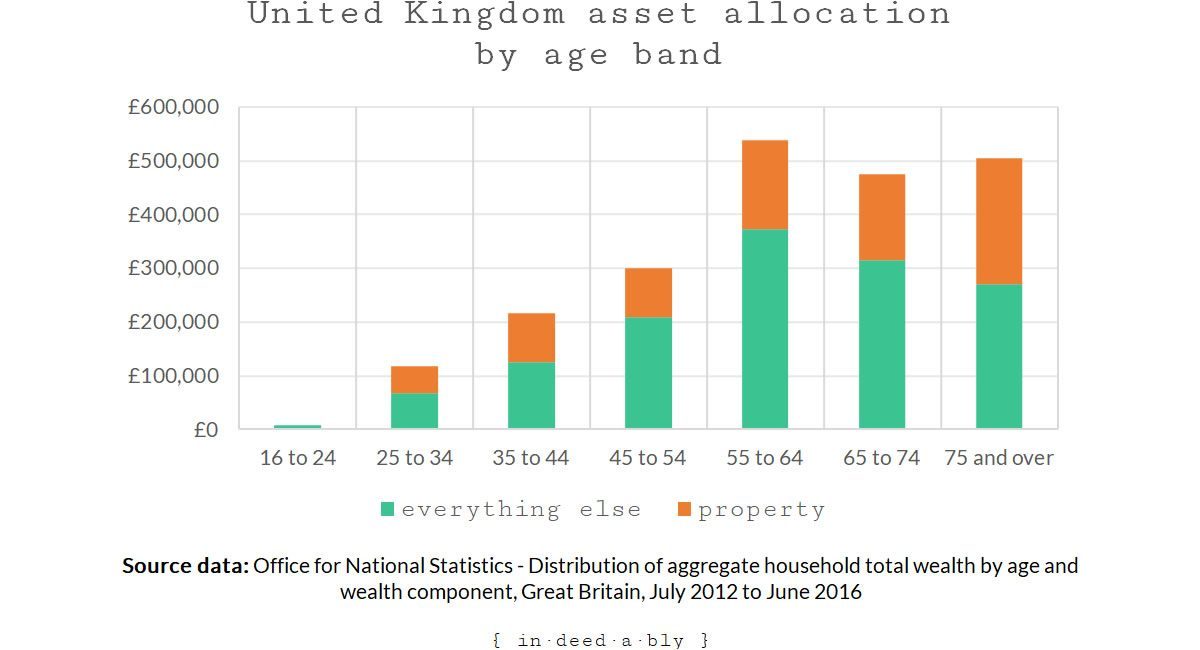 Trawling through all this data has highlighted a significant wealth inequality problem brewing. One that is already well underway.

If young people are unable to afford properties, then they won’t buy them. Instead, they will complain. Find somewhere to rent. Learn to live with disappointment.

But the story doesn’t end there.

By not buying property, those young people miss out on the opportunity to deploy the most commonly used form of leverage to increase their wealth: a household mortgage. Using other people’s money to boost their own wealth.

Missing out on the opportunity to own their own home also means missing out on one of the most tax-advantaged asset classes available in Britain. Over the long term owner-occupied homes tend to appreciate in value. That growth is free from capital gains tax, unlike other asset classes such as bonds, investment property, and shares when held in taxable accounts.

Therefore, over the long term, their net worth will likely be comparably smaller as a result.

Eventually, most homeowners pay off their mortgage. At that point their cost of living greatly reduces, providing the option to enjoy the luxury of choice. Change to a lower-paying but more fulfilling career. Retire, partly or in full. Study. Travel.

Tenants don’t enjoy that same luxury. Not owning a home means rental bills that only cease once they do.

Later in life, when their ability to work diminishes, they may experience cashflow pressures that a homeowner may not.

Some folks will pursue alternative forms of investment. Perhaps maximising their tax-free ISA allowance or using tax-advantaged pensions to invest in shares or managed funds.

A few will deploy leverage in other forms, for example margin lending.

However, the level of financial literacy required presents a barrier to entry to financial investments.

Many will squirrel money away in savings accounts.

Others will simply consume it all.

Homeownership is a lifestyle choice at least as much as it is a financial one.

Homeownership is a privilege rather than a right.

Unfortunately, high earnings multiples mean there is a risk that homeownership becomes available only to the privileged. Over the long term that will contribute to wealth inequality. Those who don’t own their own homes feeling left behind by those who do.

The underlying causes are basic supply and demand, as they taught us in Economics 101. When there are more buyers than sellers, then prices will rise. They will continue to rise until there are no more buyers. No amount of subsidy or handouts to first-time buyers will change that simple equation.

All other things being equal, it does appear that Millennials have a legitimate complaint about the tough financial hand they were dealt.