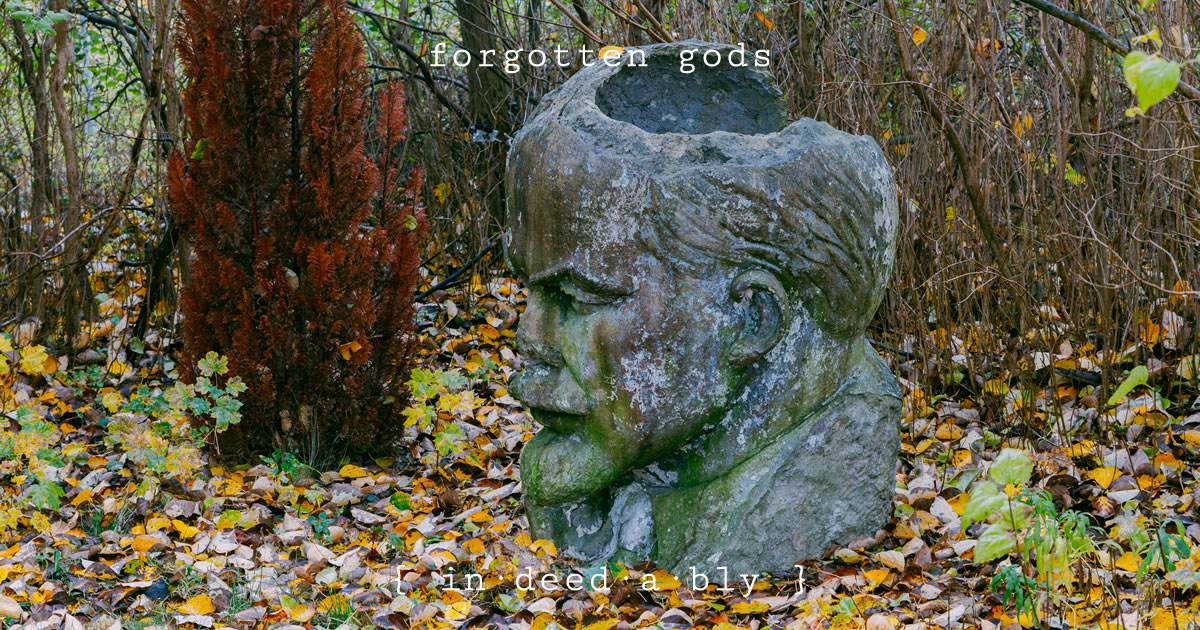 Have you ever wondered what happens to forgotten gods?

Once upon a time, each were gods worshipped and feared by entire societies. Hundreds of thousands, sometimes millions of people.

Effectively wielding an individual’s own imagination as a powerful combination of carrot and stick.

First, conjure the illusion of something wonderful that cannot be disproven. The promise of eternal life. The lure of being reunited with long lost loved ones. A future offering something more.

Then threaten to withhold that imagined future for bad behaviour or breaking the rules. Fears of damnation. Eternal suffering. Coming back as something undesirable.

The ancient equivalent of corporate performance bonuses and promises of advancement.

All in the belief that such rituals were required. To ensure that the sun would rise tomorrow. That spring would bring an end to the long cold winter.

Eventually, all things come to an end. Cultures get conquered and homogenised. Once by war. Today by corporate takeovers, television, and the internet.

The old gods replaced by the new.

Popular customs and festivals are co-opted. Acceptance of change is so much easier when people get to continue celebrating old traditions. The ancient Romans once celebrated the winter solstice with a holiday praising Sol Invictus, the unconquered sun. Today the Western world celebrates Christmas.

The gods and narrative may have changed, but the celebration live on just the same.

I remember as a kid, reading a Terry Pratchett story with the premise that a god was only as powerful as its number of followers. In the story a once-great god found himself fading from relevance as followers moved on or ceased to believe. The beautifully told children’s movie “Coco” explores a similar premise, where a deceased spirit’s continued existence depended upon their being remembered.

Any politician, celebrity, self proclaimed “thought leader”, or trend riding “influencer” could attest that there is more than a little truth behind that notion! More than a few charities and museums have been founded out of a vain desire to leave a lasting legacy. To stave off fading into irrelevance. Postpone being forgotten.

This week I read a news article that left me shaking my head in disbelief. The Ohio state legislature had passed a law that made it illegal for teachers to fail students who submitted assessable work that was factually incorrect, providing their answers were well articulated and consistent with the student’s religious beliefs.

Some of those students are being assessed for university admission into science-based disciplines like engineering and medicine.

Imagine the implications if that same rule were applied to tertiary qualifications.

Christian Scientists could become qualified medical practitioners, based solely on their ability articulately express their belief that that sickness is merely an illusion that is curable by prayer.

A series of well-reasoned papers might result in a follower of traditional Chinese medicine ordering the local hospital pharmacy dispense crocodile tails to treat dementia or tiger penises to boost flagging libido.

A decade ago Bobby Henderson invented the Church of the Flying Spaghetti Monster, as a satirical counter to the teaching of religious dogma such as creationism and intelligent design in public school science classes. Henderson argued that the followers of his church could no more prove the substance or legitimacy of their beliefs than followers of traditional religions could. Therefore their beliefs should be given equal time in school curriculums.

Pastafarianism, as Henderson’s invention became known, has since been officially recognised as a religion in the Netherlands, New Zealand, and Poland. Several American states allow followers to wear colanders on their heads in drivers license photos, recognising this as the Pastafarian equivalent of a hijab or turban.

This means that from a legal perspective, it has the same legitimacy as any widely practised mainstream religion. And access to the same tax concessions.

Henderson demonstrated that religions begin as a collection of ideas initially articulated by a single person. Mary Baker Eddy founded Christian Science in a similar way, as did L. Ron Hubbard with Scientology.

Early on a new religion is mocked and ridiculed by some. Accepted and embraced by others.

As its follower count grows, so too does its influence. Weight of numbers and peer pressure granting legitimacy to a set of ideas that were previously derided or dismissed. A sense of tribal identity emerges. Us against them.

At some point, a religion’s follower numbers peak and an inevitable decline begins. Those ideas losing relevance. Their power fading like Terry Pratchett’s formerly great god.

Eventually, the ideas and their remaining followers get subsumed into a new religion.

The gods and narrative may have changed, but the broad ideas live on just the same.

One of the things I found bewildering when I first moved to the United Kingdom was just how passionately many people supported their chosen football team. It didn’t seem to matter whether that team was in contention for the premiership or languishing at the bottom of the National League.

Every week people at the office would be recounting tales of their team’s performance over the weekend using possessive pronouns like “we” and “our”. Like they had personally been out on the pitch kicking goals or sat amongst the coaches calling the plays.

It took me longer than it should have to realise that the only connection most of those folks actually possessed to their chosen team was shouting at the television while they played.

To my unfamiliar ear, the terms “our” and “we” sounded delusional. Of grown men desperately clinging to childhood dreams of scoring the winning goal to secure the championship for their team.

Over time I came to realise that supporting their favourite team was an important part of their identity. A tribe to which they felt they belonged. Often indoctrinated as children by their parents.

With that tribe came a host of learned attitudes, behaviours, customs, traditions and values.

Depending on the club game day may involve a family-friendly outing. Community spirit. Good sportsmanship. Respect for the referees.

Or it could include being drunk and obnoxious on public transport. Persisting traditional hatreds and rivalries. Picking fights with opposition supporters, and the police. Setting off flares or throwing bottles. Singing songs with lyrics they would never say at their children’s school or in their own workplace. Tipping over parked cars then lighting them on fire.

I wondered how often those followers stopped to think through the accepted beliefs of their tribe.

To critically assess the dogma.

I suspect not very often. Tribe members seek acceptance. Desire to belong. Those behaviours are what the tribe has always done. People either accept that and remain “one of us”, or they leave.

The players and coaches may change over time, but the tribal behaviours live on just the same.

When you stop and think about it, this tribal behaviour is all around us.

Partisan politics is tribal. The unquestioning acceptance of party positions. Unthinking dismissal of anything the other side may suggest or do, regardless of merit or substance. Us against them.

All trending tribes on social media. Popular belief systems of the moment.

Some will last and endure. Others will prove to be passing fads and fade, like Paleo diets and Crossfit.

The FIRE movement is tribal. You’re a follower or you are not. In the days before the community migrated en masse to private Facebook groups and meetups, FIRE bloggers once sought to spread the word and recruit new followers.

The problem with tribal value systems is they are tightly intertwined. Followers seldom consciously pick and choose which of the behaviours and beliefs they adopt. All or nothing. Us against them.

For example, a voter in the forthcoming United Kingdom election may think a second Brexit referendum sounds like a good idea so they choose to vote for the Labour party. However, by doing so they are also be endorsing all Labour’s other policies.

Private landlords being required to sell their investment properties to their tenants at a discount under a “right-to-buy” scheme.

Companies ordered to gift 10% of their issued shares to employees, diluting the investment value of existing shareholders.

Don’t want to dilute your shareholdings or gift your wealth to tenants? Vote Tory. Except then you are also voting for Brexit. All or nothing.

My point here isn’t to disparage either party’s election manifesto, but rather to highlight that the price of admission to a tribe often involves embracing the bad with the good.

Not every football fan participates in or endorses loutish behaviour commonly associated with their team’s supporters. However, few will raise objections or try to change the culture.

Doing so would involve going against the tribe. Risking exclusion or expulsion.

My approach is to listen to what a tribe has to say, and see what I can learn from their world view.

Most of it will be mindless dogma, endlessly repeated. Unable to be validated or withstand objective scrutiny.

However, amongst all the drivel and platitudes, there are usually a few nuggets of wisdom. Valuable lessons that are worth understanding and adapting to my own life.

For example the general personal finance discipline espoused by the FIRE movement has merit, and most people could benefit from learning from it. However, people’s mileage will vary on how useful or relevant many of the other elements that often get included in the belief system may be. Bicycles. Frugality. Minimalism. Side hustles. Travel hacking.

The key thing is to listen to all sides, apply some critical thinking, and draw your own conclusions. You may just be surprised what you learn, particularly about the tribes you already belong to!

There are few genuinely new ideas. Mostly we just endlessly repackage and recycle the old ones.

The brand and narrative may be different, but the ideas live on just the same.