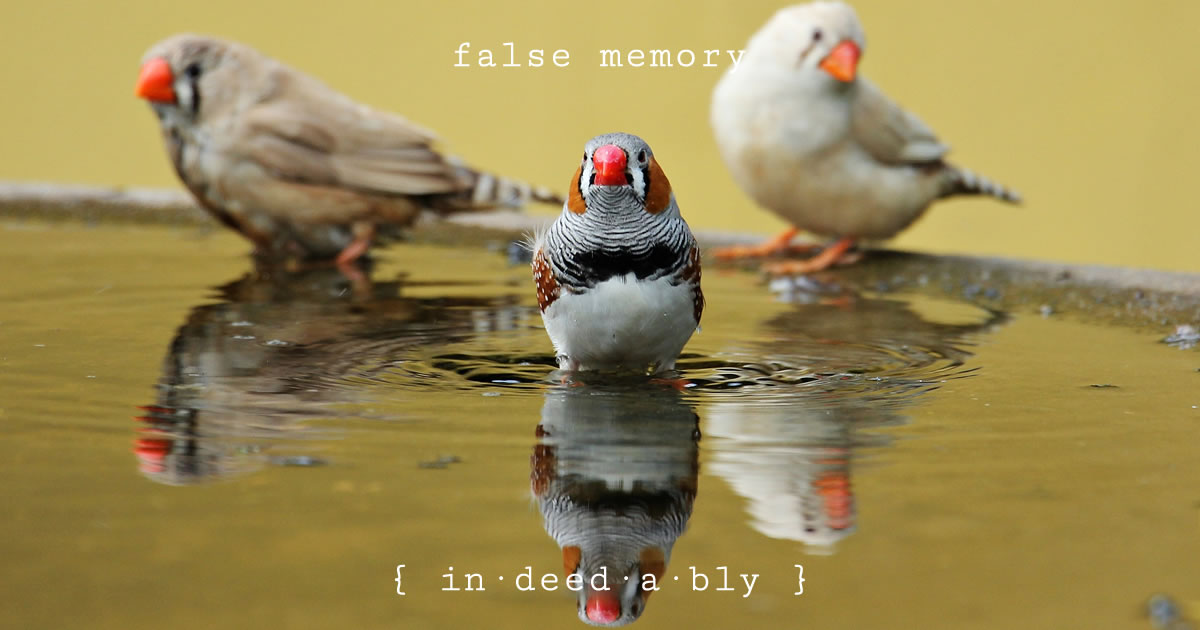 “What knowledge or abilities would you choose to acquire if you could do so instantly, without effort or cost?”

On the branch next to the happy couple were a trio of baby finches. Grey beak and feathers, their initial colouring resembling that of their mother. The three attentively watched as their father serenaded the world with the same song his ancestors had been performing for thousands of years.

The most adventurous of the children eagerly puffed out his chest, arched his back, and attempted to emulate his father. The performance wasn’t going to win X-Factor any time soon. Definitely down the Year 1 Christmas concert end of the talent spectrum.

It was a beginning. With practice and repetition, the children would soon be giving credible performances. In six month’s time they would be teaching the song to their own children, father to son, down through the generations. It has ever been thus.

Meanwhile, in a soulless sterile university laboratory somewhere in Texas, researchers tried a different approach. They implanted a false memory into the brain of a captive baby Zebra finch, using a carefully encoded light sequence to stimulate the neurons responsible for forming memories.

The false memory contained a segment of a bird song.

A song markedly different from the songs of their ancestors.

A song the baby finch had never actually heard. The kind of tune no self-respecting Zebra finch would ever naturally sing. The avian equivalent of a Nickelback song.

This optogenetic stimulation overrode the songs the baby Zebra finch may have learned from other birds. However it did not appear to impact the normal seemingly random beeps and chirps that finches make while going about their day.

A glimpse into the future

When I saw the headline about the researchers successfully implanting false memories I was equal parts intrigued and horrified.

Imagine if acquiring new understanding was as simple as downloading a file! One moment you’re as amateurish, bumbling, and ignorant as the average everyman. The next you instantly become as knowledgeable as the world’s leading experts in whatever niche subject you happened to be interested in.

Master high school calculus in a heartbeat, without all the studying and revision.

Learn to speak a foreign language in the blink of an eye. Learn to understand them all.

Become only the third person in history to have both read and fully understood Stephen Hawking’s “A brief history of time”.

Of course, for practical activities, there would still be a skills gap. You may now remember all the technique, training, and conditioning that Eliud Kipchoge or Yoyo Ma have learned. However, that wouldn’t mean you could run a two-hour marathon or successfully perform as a cello soloist during the Proms.

Balance. Conditioning. Dexterity. Muscle memory. Stamina. Strength. All those hard-won aspects of actually having done the work over many years would still be missing.

However, you could possess the knowledge necessary to repair your own car.

Build your own house.

Complete your own taxes.

Write your own computer programs, or fix the rubbish produced by the “fail fast, Minimal Viable Product and ship” crowd.

If such a technology existed, what things would you learn? What skills would you choose to acquire?

You could instantly possess the consolidated knowledge of every stock market guru and investing genius. Even then I suspect you couldn’t reliably beat the market, luck and access to insider information plays a much larger part than many would care to admit!

Maybe you would devour the collective wisdom of every self-help and wellness book ever written. Perhaps you could even validate my theory that contentment equals successful expectation management, and happiness is an experience that can be enjoyed but not manufactured on demand.

Any knowledge-based profession with guild like membership restrictions and continuous professional development obligations could be rendered vulnerable overnight. Suddenly the punters would know as much (or as little!) as the experts. The value of those skills transitioning immediately from preciously scarce to pure commodity.

Service providers would become a mere convenience, like a housekeeper, rather than an essential trusted advisor the way that many financial advisors market themselves today.

Of course there is a big difference between being able to remember something, and being able to apply that knowledge successfully. If it were truly that simple then anyone could do it.

The question is could elements of judgement, reasoning, and the application of experience also be implanted? I expect it would be complicated, and I don’t pretend to understand the science involved, but I certainly wouldn’t bet against it becoming possible one day.

A glance back at the past

The more I thought about the potential applications of memory implantation, the more I realised this experiment was really just an extension of what already we already do. Same outcome, only faster.

We used to read books and complete degrees to learn things. Now those same authors and teachers give all their good stuff away for free on blogs and podcasts, begging for our attention rather than charging us for their time.

We used to do apprenticeships to learn a skill or trade. Now we watch instructional videos on YouTube. Few of them are good, but many are “good enough” for performing just-in-time repairs.

We used to seek out wiser, more experienced heads to coach and mentor us down our chosen path. Now we find our tribes and communities of like-minded people on the internet. No membership fees, professional accreditation, or tithing required.

Providing we were willing to do the work, there is no good reason why we couldn’t all become qualified financial planners or wealth managers. Whether we would want to is a different question!

The books are long. Dull. Theoretical. Reading them does not make a person proficient.

The exams required for attaining professional accreditation are expensive. Passing them does not make a person competent.

These are barriers to entry, designed to create an element of self-selection amongst potential candidates.

There are ways around the first three in that list. The final one proves insurmountable for many.

Who can we trust?

The thing that gave me pause about the potential of this technology was the question of which false memories would we allow to be implanted in our heads?

Who would we trust?

What perspectives and biases would we be unconsciously accepting as a consequence?

If implanting memories became as simple, and required as little effort, as watching television then there would be ample scope for the masses to be led astray by propaganda and agendas. Anyone could potentially wield the same power once exclusively enjoyed by media moguls and heads of state.

How would we be able to tell the fiction from fact? Our filters and critical thinking help prevent noise or harmful memories from being retained. This technology would potentially bypass those.

What happens when advertising becomes embedded in memories?

Today the science required to make any of this possible appears to be a long way off.

It turns out the Zebra finch in the lab had been genetically modified to make it receptive to the implanting of false memories via encoded light sequences. That in itself is a remarkable scientific achievement, with fascinating potential and implications that are more than a little unsettling.

I suspect it is a question of when, rather than if, this technology will some day arrive. Bring with it boundless opportunity for betterment and understanding. Also presenting limitless risk that the same shysters and charlatans who clamour for our attention and compete for our wallets today will be right there in the thick of it.