“A taste of freedom can make you unemployable”

Imagine what your working life might look like if you could perform the tasks you enjoyed, and skip all the administrivia and bureaucratic busywork.

The coder who invests their time crafting elegant algorithms, without having to complete change control documentation or worrying about usability issues.

A financial planner who creates perfect financial plans, without having to handhold jittery clients or talk punters down from flights of fancy like investing in bitcoin or attempting to short-sell Elon Musk.

The photographer or graphic designer who is free to concentrate on their art, without needing to compromise to the whims or questionable tastes of the paying client.

During my current winter working hibernation, I’ve been given an insight into how that dream might play out in reality.

This year the tricky problem I selected to help a client solve was in the charity sector.

It offered a change of pace. A different mentality. A previously unexplored sector of the economy.

Donning my rose-coloured glasses, I perceived an opportunity to do good.

To give something back.

I naïvely imagined a site with little of the busy work, institutional silliness, or corporate bureaucracy.

Less of the politics and noise that makes getting the job done so difficult in large corporates.

Reflecting on that decision-making process now, I can only give a wry chuckle about having seen what I wanted to see!

There are few things more foolish than making a decision based on how we want the world to work, rather than how it actually does.

The reality of working in the charity sector has been eye-opening, and not at all what I was expecting.

The pithy Naval Ravikant quote above is a reminder to be careful what we wish for!

The charity sector turned out to be a seemingly endless series of contradictions.

Charities are businesses, who protest mightily that they are not.

They are remarkably adept at manipulating donors via the use of emotive imagery and marketing messages. The pictures might be different, but the methods differ little from the approach used to sell products ranging from holidays to retirement homes.

One charity I encountered even operated a profitable sideline licensing a vast library of stock images portraying many of the clichés we expect to see during media coverage of humanitarian crises.

Charities vie for our attention, and our money. Their competitors are retailers and other charities.

The effective ones operate a sales funnel process similar to those used by businesses ranging from software houses to insurance brokerages. Some of the most effective Customer Relationship Management capabilities I have encountered were run by not-for-profit organisations!

The better a charity markets itself, the greater their share of a donor’s wallet.

This can result in misaligned commercials. A temptation to focus on brand building and marketing, rather than channelling those funds into whatever cause the charity purports to support. Those branded sporting events and legions of chuggers harassing commuters on the high street do not come cheap!

We all should. For two reasons:

Charities sell experiences: the warm fuzzy feeling we get from helping others and doing good deeds.

The customers for this experience are the donors, volunteers and many of the charity’s own staff.

An overarching theme running through the charity sector is the desire to minimise cost and expenditure, so that more money can be devoted to actually doing good deeds.

This creates some interesting constraints and unfortunate compromises.

Salaries are generally at the laughably low end of the spectrum for a given skillset.

Consequently staff turnover is high, and vacancies can remain unfilled for extended periods of time.

The sad economic truth is that many people can’t afford to work for a charity.

This results in the competency bar being set very low, and expectations lowered accordingly.

During my hibernation, I observed three distinct archetypes amongst charity workers.

There are a (very) few idealistic true believers. People who selflessly devoted themselves to the charity’s mission.

This group tend to be young.

Free of financial realities like servicing mortgages or paying for child care.

Next there were a sizeable minority who are independently wealthy.

Or retired from a successful professional career elsewhere.

This group have the luxury of choice about how they invest their time, and as such can afford to perform charity work.

Many in this group possess specialist skills in areas like accounting, computing, human resources, or procurement.

The challenge they face is performing the mental acrobatics required to be content plying those hardwon skills for significantly less money than they could earn doing the same thing elsewhere.

For many of us, reconciling a purchase ledger would be too far removed from the buzz of tangibly helping people.

Especially when an alternative use of the person’s time may see them personally feeding the homeless in their neighbourhood, or helping to build an orphanage in an underprivileged village.

Finally, there are the rest. The majority of workers. Many of whom would struggle to get work in the corporate world.

Collectively these three groups form a transient workforce, with a low tolerance for bureaucracy and bullshit.

“The thing that gets us to the thing”

The Joe MacMillan character from the television show “Halt and Catch Fire” had a memorable line:

“Computers aren’t the thing. They’re the thing that gets us to the thing.”

His point was that before it becomes possible to attain a goal, there are often enablers and dependencies that must first be met. 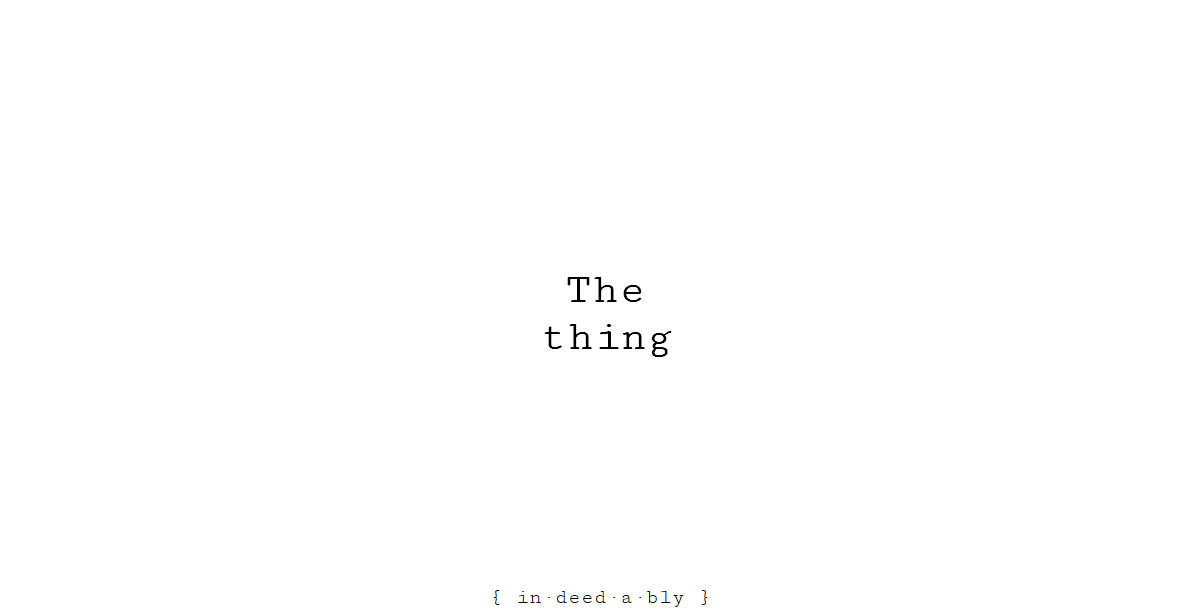 Charities, like any business, have a whole bunch of support or back-office functions that are necessary to support the “front line” provision of whatever endeavour happens to be the charity’s mission.

The Open Group’s Architecture Framework provides a good overview of those supporting functions. 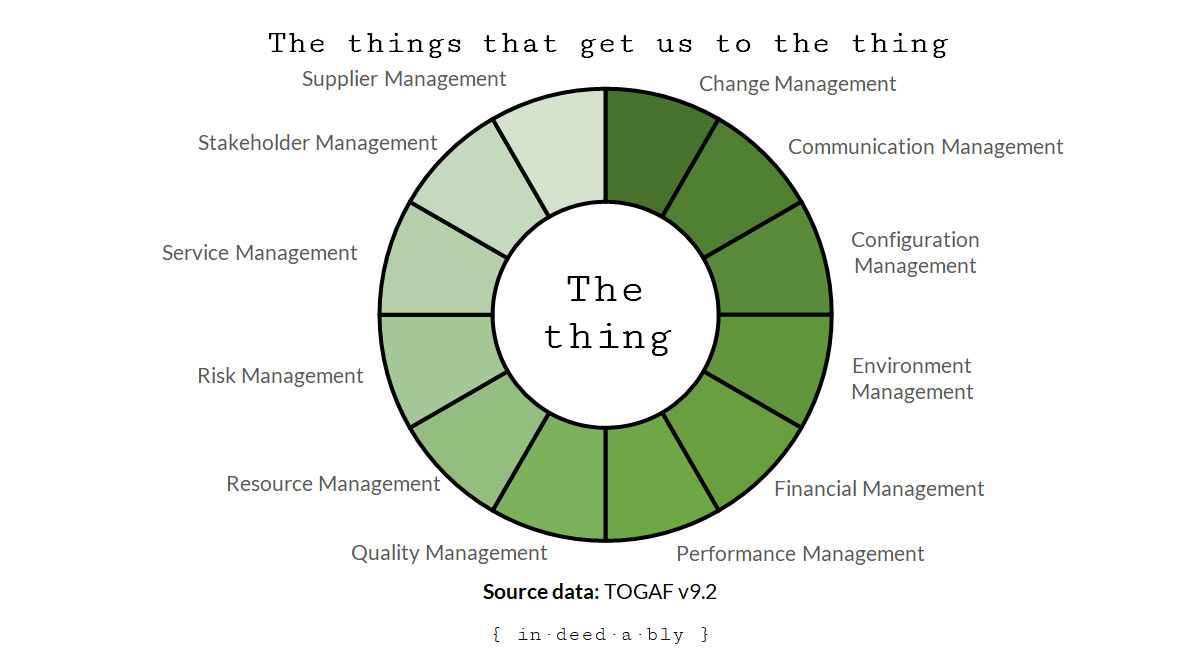 The majority of those support functions aren’t the stuff of rainbows and unicorns, regardless of whether they are performed by a non-government agency or a profit-seeking mega-corp.

The things most folks would happily skip past if given the option, so they could just do the fun stuff.

The problem is that by not doing these supporting functions well, the charity’s ability to efficiently and effectively perform its mission is compromised.

Donors would be horrified to learn their hard-earned donations were being set on fire or pissed up the wall. Yet, despite all good intentions, that is exactly what happens when “the things that get us to the thing” are neglected, poorly executed or ignored completely.

Ironically, a penny-pinching operating model results in a great deal of inefficiency.

Processes tend to be manual and inconsistent, creating friction and duplication of effort.

Systems are more likely to be paper or spreadsheet-based than automated.

Managers have poor visibility of what is going on.

Accountability for failure is rare.

The ability of the C-suite to do much about any of it is highly compromised!

By not viewing themselves as businesses, charities shun many of the standard tools and approaches that are widely used in the commercial world.

A “knowledge is power” mentality is commonplace.

Workers, who are fully aware they would have trouble landing a comparable role elsewhere, attempt to entrench themselves and become irreplaceable.

When combined with the scarcity mentality, this produces inefficient and underperforming functions.

This yields a fascinating indirect outcome: the need for consensus-based decision making to get anything done.

Inevitably change is viewed as threatening.

Institutional politics and subversion are regularly deployed to undermine any initiatives that might alter the balance of power amongst the tiny siloed fiefdoms.

None of these problems are unique to the charity sector. That said, the only other environment where I’ve observed their collectively having such a debilitating impact on an organisation’s ability to perform its core function was a large, and thoroughly dysfunctional, legal partnership!

My foray into the charity sector has taught me a number of lessons.

In many ways the charity sector is similar to airport security: visible, reassuring, yet largely ineffective. The virtue signalling of being seen to be doing good deeds is a primary driver for the industry.

The intent to do good often trumps how effective that doing good actually was.

An inconvenient truth is that the more effectively and efficiently a charity is at doing good, the larger the difference it is capable of making off the same donation base.

Consequently, a material portion of donations are wasted.

But through apathy, acceptable incompetence, and a lack of accountability.

An unexpected lesson I learned was that providing employment to folks who were unemployable is an indirect part of the charitable work performed by many organisations in the sector.

Initially I was appalled by this!

However the longer I worked at the site, the more I appreciated just how beneficial it was for a person to have a job.

To have a purpose.

A sense of identity.

A reason to get out of the bed in the morning.

It is true that many of these folks were well-meaning, yet hopelessly incompetent. However, as many of their jobs consisted largely of low-value busy work, this didn’t really matter.

The self-esteem and value they derived from holding down a job was priceless.

Once I understood this, I realised that it mattered much less about how ineffective the organisation was at performing its mission. Donations received by the charity were still assisting people in need, just those located closer to home.

That sat better with me than the donations lost to:

It isn’t the right answer, or solving the right problem, or doing it in the right way.

However in the absence of better options, it helps to do some good.