During our daily walk in the Spring sunshine, my elder son was waxing lyrical about how proud he was of his mother. She will soon start a new job. In an entirely new industry. Several rungs higher up the corporate ladder. No longer one of the troops, this time she will be running her own department.

The boy paused for a moment, then asked about how pensions worked? Did an employee receive a different pension for each job they held throughout their career? Or do they all get combined into one single pension?

I explained that it depends.

Some jobs come with pensions. Others do not.

Average employers contribute the bare minimum amounts they can legally get away with.

Shitty employers strong-arm employees into opting out entirely. Not ethical. Not legal. Not uncommon.

Employees have the option of starting a new pension with each new employer. Alternatively, they may be able to consolidate some or all of their pensions into a single pot. This may make sense where a past employer’s pension charges high fees or offers only a limited range of investment options.

He thought that over for a moment, then asked whether I matched pension contributions for my staff?

He paused again, momentarily struck dumb as a pretty lady wearing short shorts gave him a huge smile as she rode past. The boy is growing up! Once his brain re-engaged he asked:

“So Mum might receive lots of different pensions when she is old enough? Regardless of what she is doing, where she might be, or who she is working for?”

I nodded again. Curious as to where this conversation was going.

He looked thoughtful. Mulled it over. Then eventually said, “That’s good.”

Glancing over his shoulder, he lowered his voice and muttered: “It isn’t that far away, you know?”

I nodded a third time. Less than a decade. On the horizon, visible from where we were standing.

Anyone who mentioned that fact out loud would be a dead man.

Scorched Earth. No mercy shown. No prisoners taken. No quarter given. We both knew it.

We walked along in companionable silence for a while.

Finally, the boy asked, “Do you have a pension?”

Save us from ourselves

The idea behind placing age-restrictions on pension accounts is that we can each contribute towards the cost of our own retirement in the future.

A noble goal, yet the paltry mandatory contribution levels in place today mean this will be little more than a token gesture for many.

By locking the money away, we are prevented from making short term decisions that may jeopardise our long term financial health and well-being.

The government is essentially saying that the average legal adult, who is allowed to vote and to raise children, cannot be trusted to make the right choices regarding the management and prioritisation of their own money.

An uncomfortable truth is that they were almost certainly correct in reaching this conclusion. Don’t believe me? Read any major daily newspaper. Examples of legal adults making poor choices are legion!

The strength of that absolute restriction is also its greatest weakness. Specific rules vary by jurisdiction, but the general principle is that retirement funds are inaccessible until retirement.

What happens if you are wrongly accused of a crime? Now you need to tap into your retirement savings to finance the legal defence required to preserve your liberty and clear your name? Too bad.

Does one of your children need expensive experimental drug treatments to save their life today? Your only means of acquiring it is cashing in your pension assets? So sad.

How about if your once profitable business is now experiencing a temporary cashflow crisis? The lockdown prevents you from plying your trade, yet those fixed recurring costs like rent and equipment leases continue to accrue. Personal loan guarantees mean bankruptcy for you and homelessness for your family are imminent, unless you can tap your pension pot for an emergency cash transfusion? Bye-bye.

Obviously, these are all edge cases. Yet they pose an interesting question: how comfortable are you with the idea of a government telling you how and when you can spend your own money?

That leads us to the question of regulatory risk. How confident are you that goalposts won’t move?

Maybe the age at which you can access those pension funds changes.

A twenty-year-old making a pension contribution today is taking a punt. They are betting that between now and the age they can access their pension, currently 35-40 years in the future, the rules will not change in an adverse manner that materially harms their financial wellbeing.

That may prove to be a reasonable bet. Yet it is important to recognise it as such. The future is uncertain. Our decisions should consciously factor in foreseeable risk and anticipated reward.

To superficially illustrate that things do change, consider how the world looked to a comparable twenty-year-old some 40 years ago, when they dreamed of accessing their private pension today. 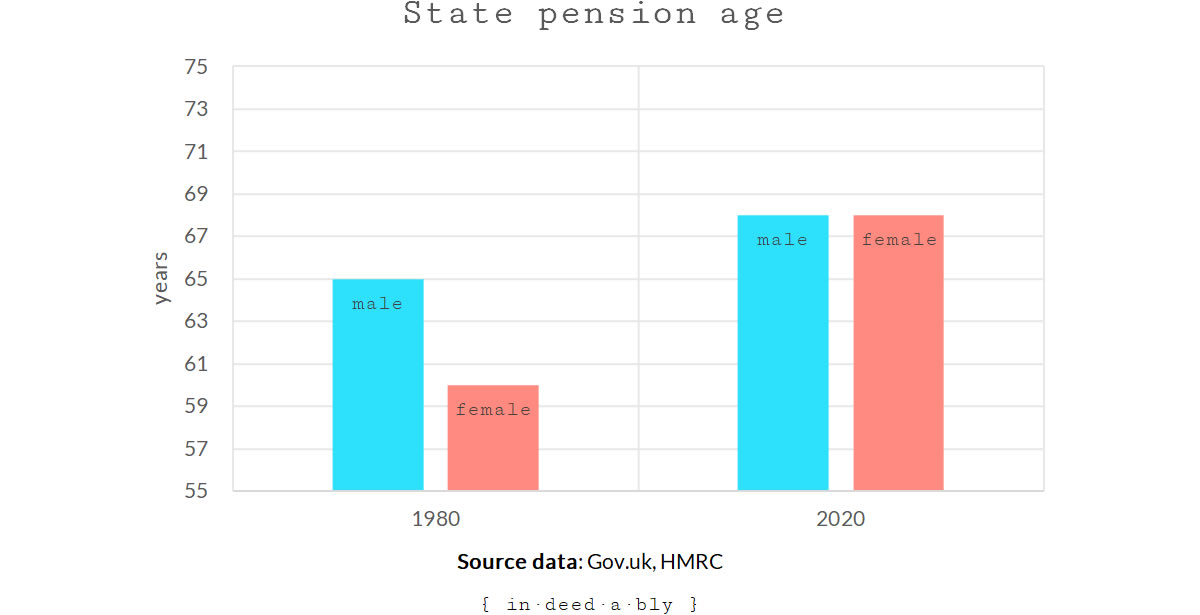 The takeaway here is that significant changes to the rules will occur over an extended period of time.

I have several traditional workplace pension accounts scattered around the globe. A byproduct of having led a somewhat nomadic existence back when I was young and responsibility-free.

None are worth a great deal.

Unlike American pension accounts, there is almost no way to access the contents of these age-restricted pensions before “early” retirement age, which for my accounts range between 55 and 60.

One challenge with pensions is that the rules and regulations governing them vary markedly from one jurisdiction to the next. This means one government seldom recognises the rules of another as having equivalency. Attempting to transfer or consolidate international pension pots is always a bureaucratic nightmare, and often proves to be an impossible dream.

Even within a single jurisdiction, the rules of an individual pension provider may preclude consolidating in or transferring out balances from another pension account. For example, additional contributions might only be accepted while the pension holder remains actively working in a given industry, for a specific employer, or as a member of a particular trade union.

Another challenge is that pension contributions can easily become trapped in an undesirable investment vehicle.

That can result in employees having to choose the least bad option amongst a range of poor choices.

Years ago, the default option offered by one former employer was a single market passive index tracker with an ongoing management fee of 500 basis points. By comparison, at the time of writing that was more than 22x what Vanguard charge for their VWRL global index tracker.

Another of my pensions automatically enrolled members in an additional fee life insurance product. However, only those who remained actively working for the employer at the time of their death were eligible to claim upon it. The pension provider levied a monthly fee for an inappropriate product that the vast majority of members could not use.

When I originally departed my country of birth, I thought I would only be gone for a year.

Each place that I lived was temporary. A short-term adventure, before I would eventually return home.

One year became two. Two became three. And so on.

Before I knew it, a decade has passed.

When you lead a nomadic lifestyle, making pension contributions makes little sense. It would be decades before that pension became accessible, while I would have moved on within the year.

Eventually, I found myself in London.  Without realising it at the time, I started down the long and expensive road towards permanent residency and a British passport.

At the time, the British government didn’t want migrants. They had closed off many of the traditional routes towards United Kingdom citizenship for non-European nationals.

In the economic headwinds leading into the Global Financial Crisis, the only route remaining open to me was that of a “highly skilled” migrant. Which required being able to demonstrate a correspondingly high level of net earnings.

To complicate things further, the immigration authorities would not recognise “unearned” income when evidencing that earnings requirement.

If I wanted to stay in the country, I needed to demonstrate that I held a high paying permanent job.

Except that I owned and operated my own business.

I had little option but the “employ” myself as a high salary earning permanent member of staff. With a correspondingly high PAYE income tax bill.

In what would provide a sneak peek into the post-IR35 “disguised employment” world, I also had to pay both the employee’s and employer’s share of National Insurance contributions on that income.

An “idiot tax” is the opposite of tax avoidance. It means voluntarily paying more tax than is required. Having to pay National Insurance meant my idiot tax was levied at an additional rate of 16.5%.

Compounding that problem was the fact that to satisfy the visa earning requirements, I had to extract more cash from my business than I needed to cover my lifestyle. This pushed me ever higher up the marginal tax rate table, at the cost of paying a further 40% in tax on each additional pound earned.

Unfortunately, I couldn’t salary sacrifice any of that amount into a private pension. The immigration authorities reconciled payslips to bank statements, verifying that net earnings had actually been received by the visa applicant.

The total fees to obtain British passports for myself and my family cost in the low five figures.

Add in the amount consumed by all the additional taxes, and the total cost would have paid for an average terrace house.

I don’t even want to think about the opportunity costs!

By that stage, my old passport was full of stamps, while my pension pot was correspondingly empty.

I wasn’t too concerned, however.

I owned a profitable business.

After spending years dancing to the tune of onerous and ever-changing visa conditions, I find myself risk-averse when it comes to relying on a government to not change the rules or move the goalposts. The subsequent removal of a private landlord’s ability to offset their financing costs against rental property income certainly did not dissuade me from this view!

The incentives and tax benefits baked into the United Kingdom tax system are undeniable.

Yet, for me, they come with too many strings attached.

Income from my investments is flowing in. Now. Accessible today.

With no age lock-in or government imposed restriction.

If I play my cards right, those same income flows should continue once I retire, wherever and whenever that happens to be.

Some may say that I have adopted an indefensible position.

Passing up the “free money” that comes from employer pension matches would be widely viewed as heresy in personal finance and financial planning circles.

The benefit of my approach is that I have no income gap to bridge between today and some arbitrary pension eligibility age.

The absence of an age lock-in has allowed my passive income streams to help finance my lifestyle costs today, which in turn allows me to live the semi-retired working pattern I enjoy.

It is a personal choice. I am consciously paying the price for that flexibility. Indefensible position or no, for me buying that freedom was worth it.

As I said to my elder son, “it’s complicated”.