“If you’re happy and you know it, drink some beer!

If you’re happy and you know it, drink some beer!

If you’re happy and you know it, and you really want to show it

If you’re happy and you know it, drink some beer!”

What the drunken Kiwis in the beer garden lacked in talent, they more than made up in enthusiasm.

The six-year-olds on the coach took up the song, gleefully shouting at the tops of their lungs about drinking beer. Their parents would be so proud, particularly those observing Ramadan.

We had been stuck on the coach for an eternity. It had broken down on the return journey to school, after an excursion to a museum on the other side of town. The coach company’s usage of the word “momentarily” to describe the anticipated arrival of the replacement appeared more closely aligned with the Washington DC Metro than the traditional dictionary meaning.

The class teacher wore the type of thousand-yard stare normally associated with sufferers of Post Traumatic Stress Disorder. She sightlessly sat at the front of the bus, watching for the approach of the much-delayed replacement coach.

Her class of grumpy, hungry and tired year one students had turned on her once they tired of playing “eye spy” and exhausted her supply of Julia Donaldson books. Sensing weakness in her resolve, things quickly degenerated from first tentative complaint to the full “Lord of the Flies” experience.

I would like to believe I am genuinely great at one, maybe two things. I’m passably good at a handful more.

Babysitting a class of six-year-olds is not one of those things.

In fact, it is a task I am singularly unsuited to. To describe such circumstance as my own personal hell would be only mildly exaggerating.

Yet here I was. On the first day of my seasonal semi-retirement.

It was a classic case of misalignment between what I choose to do and what I have to do. A troubling thought, and one I intended to reflect upon when I survived this school trip.

At school drop off that morning, I had spied an anxious huddle of adults talking animatedly. The teachers looked worried. My lizard brain had instinctively booted up my fight or flight response.

The “class parent” saw us approaching and broke away from the huddle. Shoulders squared. Jaw set. Eyes blazing with steely determination.

She marched over to intercept us.

Weighing only slightly more than my lazy pet cat.

There was a rumour she was ex-Spetsnaz. All the other parents were all terrified of her.

“Today is class trip. Parent who volunteer to help not here. Cowards! You and I go instead. If not, trip will be cancel.”

I blinked. Goldfished. Felt like a deer in headlights.

26 sets of six-year-old eyes had implored me to say yes.

My son anxiously squeezed my hand and whispered: “Please Dad?”.

The hour-long commute there had been as noisy and arduous as I feared. However, once we arrived at the museum, the trip was actually kind of fun.

Each adult was assigned roughly 7 kids for the day. The other groups set off holding hands in a long chain, helicoptered over by responsible adults shepherding their flocks.

I opted for a more free range approach. I quickly outlined some simple rules for my group:

The group wore expressions ranging from excitement to shock to disbelief. They all glanced at my son, who gave a solemn nod and told them:

Then I unleashed them on the unsuspecting museum.

I only lost one out of seven over the course of the day. The broken kid, whose parents are first cousins: uncoordinated, slow, impulse control issues, and the most likely to set themselves or the building on fire.

I thought that was a pretty good batting average. The class teacher disagreed.

As expected, the boy turned up when he got hungry. He was happily wielding a hair dryer he had stolen from somewhere, pretending it was a toy gun.

Eventually, it was time to return to the coach for the homeward commute.

Twenty minutes into the journey, the coach broke down outside a quiet suburban pub in the middle of nowhere.

The coach driver had called for reinforcements, then slunk off in search of coping juice. He couldn’t handle the noise generated by a class of couped up and bored primary school children.

I didn’t blame him. Most of the time I have made my peace with not drinking. Today, watching the Kiwis enjoying a beer with their mates in the sunshine, I wanted to watch the world burn.

Sometime later, the son of the “class parent” swiped the hair dryer from the broken kid.

With a demented howl, the broken kid hurled himself over the back of the coach seat at the thief.

To give credit where it is due, he did a decent Superman impression. His landing needed work though.

A snarling writhing mass of six-year-old bodies fell into the aisle.

I grabbed the two squabbling boys by the backs of their t-shirts and forcibly separated them.

The thief had an impressive array of bite marks down the arm that still clutched the remains of the hair dryer. At least one appeared to have punctured a vein, blood oozing down his hand and onto the floor.

The broken kid looked like an extra from a low budget horror movie.

Blood smeared over lips and chin. The thief’s.

More blood flowed freely over one eye and down a cheek. His own. From a scalp wound, where the thief had brained him with the now shattered hair dryer.

Both boys were crying.

The teacher went into shock.

She threatened the teacher with litigation. She promised retribution on the broken kid. Then she dragged the thief off the bus in search of a tetanus booster.

Back in my day we would have called it a draw, patched each boy up with some disinfectant and a band-aid, then sent them back out to play. Simpler times.

The broken kid’s parents didn’t answer their phones. The emergency contact number had been disconnected. He seemed more upset by the broken hair dryer than his injury or uncontactable parents.

The very young looking teacher’s assistant conjured up an Uber, and escorted him to the local Accident and Emergency department for some stitches.

Following all the excitement, the kids were hyped up and hungry. They were not at all inclined to sit still or patiently wait for the replacement coach, as the teacher tearfully begged them to do.

To burn off some energy, I got them to sing some nursery rhymes at the top of their lungs.

The very merry Kiwis in the beer garden returned fire.

A sing-off ensued, culminating in “if you’re happy and you know it drink some beer”.

By that point, I had exceeded my tolerance for boredom.

I ordered the kids off the bus and into the pub. Releasing an invading horde of unruly six-year-olds is a remarkably effective way to empty a bar!

While the kids were running riot in the bathrooms, the barman kindly organised a few cheesy pizzas to fuel them up.

I had expected the kids to descend on the pizza like a pack of ravenous beasts. Instead, they hung back and asked lots of tricky questions. Were the pizzas:

The barman gave an impressive Gallic shrug, followed by an eye roll that was echoed by my son.

I inwardly groaned. Why do people make simple things so complicated?

“Of course!” I lied. “They are wonderous magical pizzas that conform to all your dietary choices”.

Sufficiently reassured, most of the kids got stuck in. Fortunately, none were allergic to pizza. I should have checked first.

When I asked those not eating what was wrong, they simply replied: “Ramadan”.

Sigh. Going without food or water all day is a big ask of a six-year-old. I respected their commitment.

The barman offered to turn the lights off, so it would be dark inside and they could eat. The kids called bullshit, patiently explaining that wasn’t how it worked.

The tipsy coach driver reported the replacement coach was at least an hour away. I banished him back to the bus, to keep an eye on the traumatised teacher.

She refused to step off the bus until the replacement arrived to take her safely back to school.

Any landing you can walk away from

Sufficiently refuelled, I marched 24 mostly happy kids more than three miles to the nearest tube station for the uneventful peak hour journey back to school.

Three hours later than originally planned, we arrived back at the school with 92% of the kids and only a quarter of the adults that we had departed with nine hours earlier.

We were met by the Head Teacher and a gaggle of anxious, bored, and mostly angry parents.

Several kids, my son included, gave me a hug and thanked me for taking them on “the funnest school trip ever!”

As the kids streamed out of the school gates bound for home, they regaled their parents with tales of blood, pizza, public transport, pubs, and songs about beer.

The Head Teacher raised an eyebrow and commented that it sounded like an eventful excursion.

The next morning I learned it had taken more than five hours for the replacement coach to arrive.

It took even longer for the broken kid’s parents to notice he hadn’t come home from school. By that point, the young teacher’s assistant had long since given up on them. She created quite a stir when she handed off a bloodstained six-year-old with 22 stitches in his head to Children’s Services.

The traumatised teacher was signed off on stress leave for the remainder of the school term.

After avoiding the scary “class parent”, and dropping my son off with the supply teacher, I returned home.

I spent some time reflecting on my earlier epiphany about the misalignment between what I chose to do and what I had to do. The last thing in the world I would have chosen to do was go on a class field trip, and yet I had invested the first day of my seasonal semi-retirement doing exactly that.

I wondered whether such a misalignment might also exist in my lifestyle costs?

Fortunately the way I track my finances made it a relatively simple exercise to check.

I extracted 12 months worth of expenditures, rolled up into categories.

Then I gave each category two scores:

Plotting the intersection of the two scores on a chart, I used each category’s total expenditure to size the bubbles. 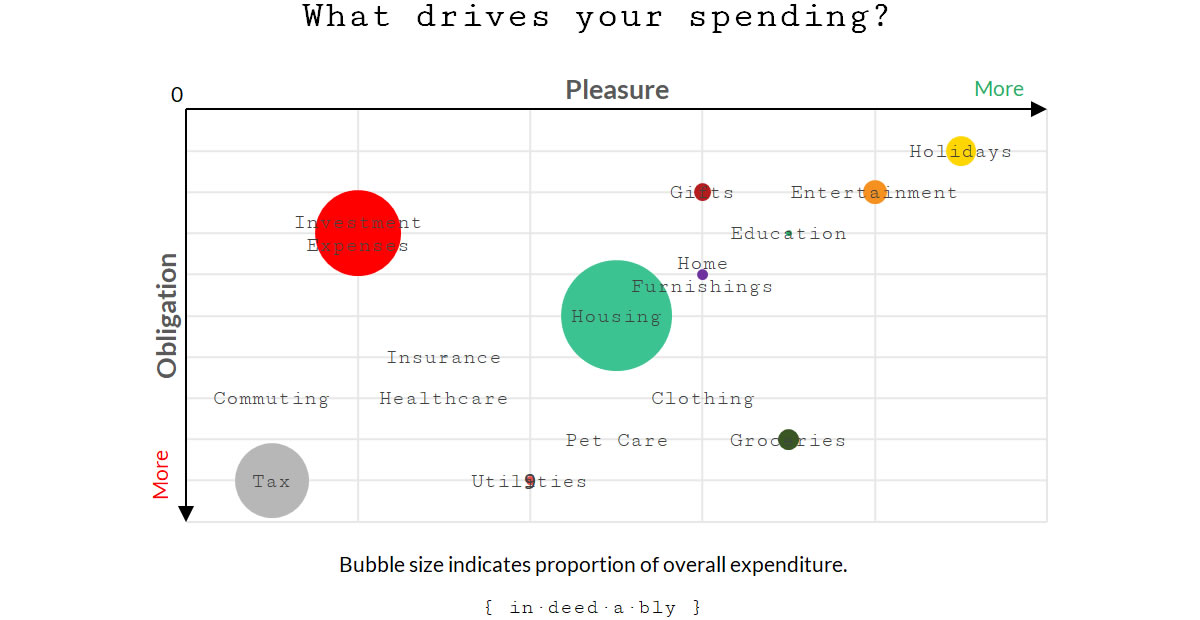 Taxes appeared at the bottom left. I get no pleasure from paying them, yet the obligation is strong.

Holidays appear at the top right. Some of my greatest pleasures, and entirely discretionary.

Everything else falls somewhere in between those two ends of the spectrum.

The surprising thing was how misaligned my spending appears to be.

The majority of my outgoings are spent on categories that I scored as providing me with little joy.

Yet only taxes, utilities and feeding my family scored as being something I had little discretion over.

Something has gone awry there.