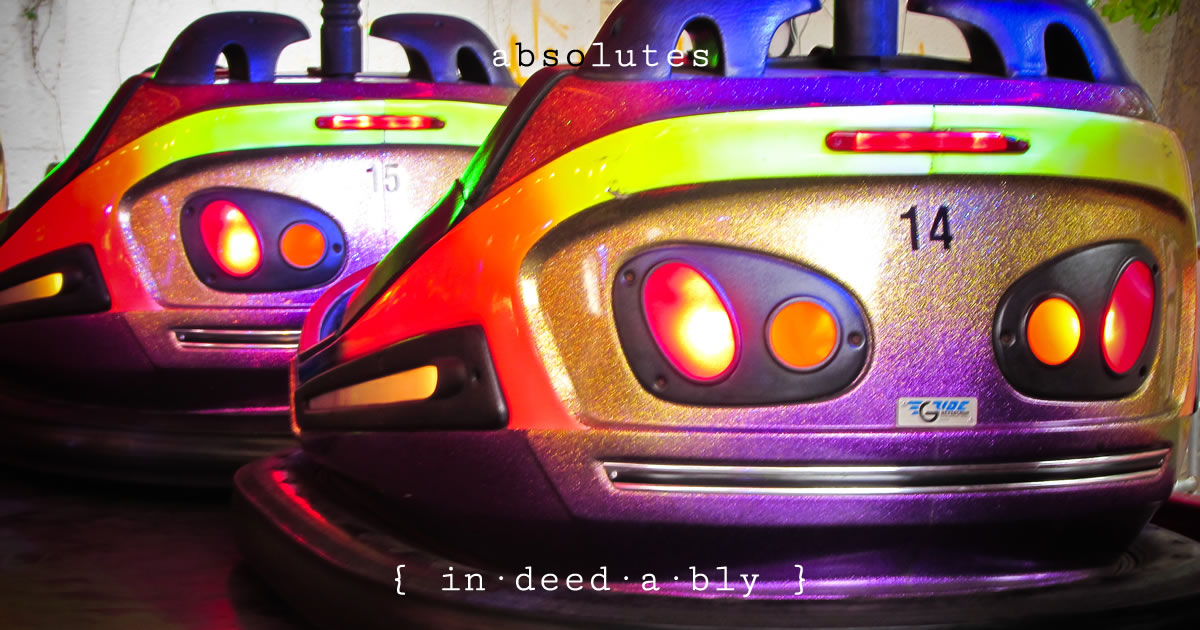 Bernd planted his foot on the accelerator and surged across the finishing line. Twin trails of water sprayed dramatically from the rear of his car. The abysmal conditions would have been better suited to racing boats than cars.

Hot on his heels were seven past, present or future world champions. A dozen more cars made up the numbers in the tightly bunched field.

Sporting bright liveries and aerodynamic styling reminiscent of an upside-down fighter plane, the cars roared past the grandstand. Collectively they generated the kind of noise that you feel deep inside your chest. Deafening just doesn’t do it justice. A volume that is experienced more than heard.

Bernd had been driving Formula 1 for more than a decade. Throughout the course of his career he had lead dozens of races. Hundreds of laps. More than many one-time world champions.

Yet Bernd had never won a championship. Nor a single race. In fact, few people even knew his name.

For Bernd drove the safety car.

Dispatched out onto the track to slow the field down and navigate them safely past cars inconveniently parked through poor choice or unfortunate circumstance. Dodging debris and detritus. Or, like today, traversing monsoon-like weather with limited visibility to prevent hyper-competitive drivers operating hugely expensive engineering marvels from behaving like naughty school children riding bumper cars.

Like many children, Bernd had dreamt of becoming a Formula 1 driver when he grew up.

Like many childhood dreams, his grand plan had overlooked some minor technical details.

First, Bernd wasn’t rich. This meant that unlike many Formula 1 drivers, he couldn’t purchase a seat on the grid with vast sums of sponsorship money.

Second, Bernd wasn’t fast. He was competent. Better than average. But he lacked that innate something that sets the true racers apart from the also-rans and the wannabes.

The complete absence of any sense of self-preservation.

One thing that set Bernd apart from many childhood dreamers is that he actually did the work. Committed. Gave it his all. Put in the effort. He once won his class at the Le Mans 24 Hour endurance event. Scored victories in a handful of touring car races.

Bernd was astute enough and sufficiently self-aware to recognise that despite some qualified success, he had reached the limits of his talent. Formula 1 racing was a leap too far. An impossible dream.

But here is the thing: Bernd has spent many years travelling the world, attending every Formula 1 race weekend. He soaks up the atmosphere. Enjoys the spectacle. Travels and socialises with some of the most talented drivers and engineers on the planet.

He has managed to realise almost all the elements of his childhood dream. But he doesn’t get to race.

Some would say that is the most important part. That anyone who isn’t competing is a mere spectator.

Yet those people miss the point. Bernd made the most of his talents and opportunities. He realised that living the dream isn’t an all-or-nothing proposition.

Bernd could have tried. Failed. Given up. Moved on to do something “sensible” with his life, like becoming an auditor or a librarian. Most people in his circumstances would have done.

Instead, he realised that few things in life that are absolutes.

That by approaching things from a different perspective and thinking laterally, he could achieve much of want he wanted, even if he couldn’t have it all.

Bernd found a way to turn his weakness, being consistently slow, into a competitive advantage. When a circuit begins to resemble an ice rink or an obstacle course, slow and steady really does win the race. Everyone else crashes! Safety car driving was a good match for Bernd’s interests and abilities.

The paradox of leadership

While working at client sites I regularly encounter starry-eyed graduates who fervently believe they are destined for greatness. They are special. Their parents and teachers always told them so.

They have no intention of serving their time as accountants, analysts, or developers. Of learning the business. Gaining knowledge of the value chain. Possessing the wisdom required to distinguish fashion and noise from the things that don’t change. The things that really matter.

Their planned career trajectory is to become a management consultant or project manager, so that they come to the attention of the C-suite. Be seen to score a couple of goals. Demonstrate brilliance or luck. Then swiftly join the ranks of senior management.

Most will fail. Wash out. Blow themselves up as their ambitions exceed their abilities.

However, just like with Formula 1, a very select few will make it to the top. Enough to persist the myth that this approach is a viable one, and inspire the next generation to try and follow in their footsteps.

Often these folks are disparaged and written off. Ambitious. Entitled. Ignorant. Precocious. Pretentious. Young punks who haven’t paid their dues.

Recently, I’ve been pondering whether they may actually be on to something?

The primary function of those occupying the C-suite is to make decisions. To hire people smarter than they are, let them worry about the details, and then listen to what they have to say. To imagine a future, chart a course towards it, and lead the organisation down the required path.

As Jeff Bezos once articulated it:

There is no mention there of coding an algorithm, documenting a requirement, or reconciling a ledger. Nothing about auditing accounts, mopping floors, or peeling vegetables.

Those are all important functions. However, they are generally not functions performed by leaders.

It is often said that a good leader will not ask something of their staff that they would not be willing to do themselves. Noble sentiments about inspiring the troops and leading by example.

While a leader may possess the skills required to debug some code or clean out the deep fryer, doing so is unlikely to be the most productive use of their time.

I remember the day when my developers revoked my coding privileges. They observed that while I was having fun torturing computers, I wasn’t performing my day job as the boss. It stung to admit it, but their observation was correct.

Herein lies the paradox: if those skills do not train a person in leadership, and leaders do not perform them, then why would somebody aspiring to a leadership position wish to invest time learning them?

Mastercraftsman or puppet on a string?

Once upon a time a worker starting out would be apprenticed to a master craftsman.

Their skills honed over years of hands-on mentoring and training. Beginning with the basics, then gradually refining through endless repetition. Eventually graduating as a journeyman, and deemed to be a competent practitioner of the trade.

A select few would continue to learn and evolve their skills until they had mastered their trade. Their work product becoming artistry. Admired and respected by all who were fortunate enough to experience it.

A master craftsman was more than capable of fulfilling the duties of the journeyman.

The journeyman could perform all the tasks undertaken by the apprentice.

Each layer of the profession more skilled and specialised than those below it.

However, within the corporate world, the opposite is true. Few CEOs are like master craftsmen, capable of performing all the roles in the organisational hierarchy below them. In fact, few senior managers could successfully perform all the roles they oversee even two levels below them on the pecking order.

That does not make them incompetent as such, rather it highlights that they require a markedly different skill set to those possessed by their staff.

The ability to influence, inspire, affect change, and attract talent. Behavioural psychology and soft skills are a must. Practical hands-on experience an optional extra.

Part actor. Part politician. Part puppet. In many cases reading from a script that has been written by others. Majority shareholders. Management consultants. Market research firms. Speechwriters.

It is easy to see why those graduates perceive a “fast track”, a shortcut around all the plodding fools diligently paying their dues and shuffling up the corporate ladder at a glacial pace.

However, it is difficult to see what they would actually be competent at doing once they arrive.

That raises an interesting question: if the roles below won’t equip a person with the skills they require to successfully do the job above, then why bother doing them at all?

Many of us learn our management skills the hard way, on the job. Making small mistakes with small implications, while managing small teams within a small realm of responsibility.

Those who succeed on the fast track are like the drivers who manage to make it into Formula 1. Suddenly they are operating multi-million dollar machines that are capable of going from 0 to 100 in less than a heartbeat. There is no such thing as a small crash when you are travelling at 300 kilometres per hour, while the whole world watches on!

Those who have developed their skills and know their limits may thrive and succeed.

Those who have not will likely result in Bernd’s services being called upon. There is a reason that you don’t see many Formula 1 cars with “L” plates attached. Those who require them don’t survive for long.

I think Bernd had the right idea about the dangers of absolutes.

While shooting for the stars, many people neglect to enjoy the view.

They also forget to regularly take stock of where they are at, and whether their direction of travel is still providing them with whatever it was they hoped to find at the end of the journey.

Most of us aren’t equipped to be a competent Formula 1 driver or the CEO of a megacorp.

Even if we were, many people seeking those roles probably wouldn’t be happy in them. It is human nature, expectation exceeding reality.

By contrast, some people love performing roles that couldn’t be further from the masters of the universe and world champions. Everyday professions like programming computers or cooking meals. There are even a very select few who have discovered a passion for niche pursuits like forensic accounting or extreme taxidermy.

For mine, it is this group of people who have succeeded. They might not be at the top of the food chain, but they have discovered a usage for their time that provides them with a sense of fulfilment or of contributing real value.

Rather than constantly seeking “more” and trying to conquer the world, they have found contentment where they already are. It may not be perfect, or the stuff of childhood dreams, but it is enough.

Bernd chose to focus on what he could do, rather than what he couldn’t. As a result he has spent more than a decade enjoying the majority of what he originally wanted, without first having to wait until he made it to the top. Whether by accident or by design, his current existence also avoids the mortal peril of living life on the edge.

There is a lot to be said for the simple life.