We turned yet another corner in the seemingly endless Schönbrunn Palace Maze.

My feet were tired.

A five-alarm toddler tantrum was brewing. Mine!

My super excited five-year-old son eagerly led me by the hand at great speed, down passageways and taking random turns at intersections.

Unexpectedly we emerged from the labyrinth. Hoorah! Time for lunch.

My brief elation was cruelly dashed by the strategic placement of a children’s playground between the maze exit and the coffee shop.

Curse you gods of urban planning!

Faster than I could say “sandwich” the boy streaked off like a greyhound on cocaine.

After much climbing, jumping, digging and swinging he called me over to a spectacular array of funfair mirrors. He contagiously cackled as our distorted reflections had us looking like extras in a “Despicable Me” movie.

Sometime later, while refuelling on a restorative flatbread toastie, I skimmed through the latest collection of articles in Feedly.

Could it be true?

Is it based on perception, like our distorted reflections in the funfair mirror?

Or, like many statistics, is it just something the author had made up on the spot?

To find out the answer, I decided to delve into the maze that is demographic statistics.

According to the Office of National Statistics, at the time of writing there were over 66 million people living in the United Kingdom. The vast majority of them can be found crammed onto the Central Line at peak hour!

The first chart breaks that population down by gender and age.

Government defined age constraints delineate the various financial life phases that a member of society progresses through. I have applied shading to highlight those age bands. 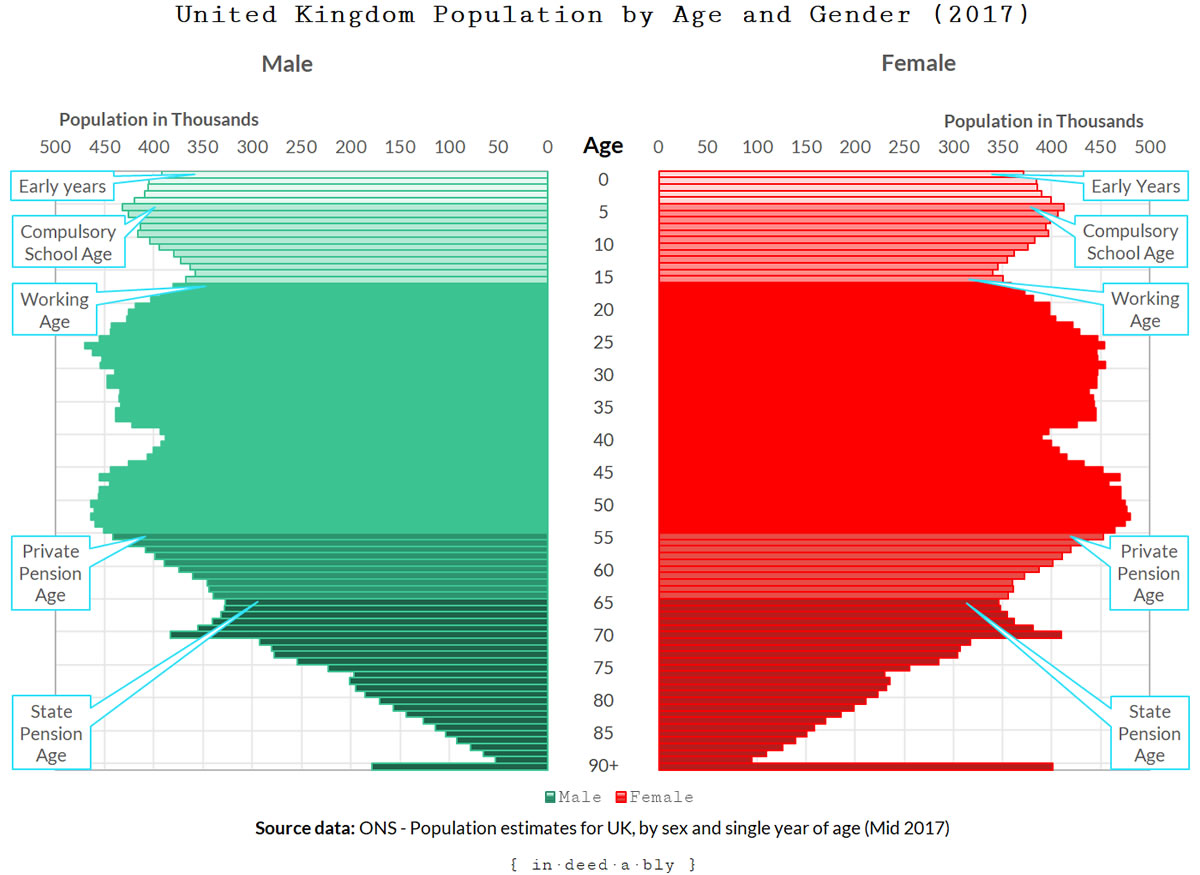 At first glance the “half the population doesn’t work” claim looks like it is probably exaggerated. Children and retirees bookend the journey through life, but when combined, the two groups do not appear to be a match in size for the working age demographic bulge.

In these days of low unemployment rates, there couldn’t possibly be so many people seeking work to account for the difference. Could there?

Are workers really the minority?

The second chart looks like a colour blind toddler got stuck into the crayons.

It applies the employment, unemployment and economic inactivity rates from the ONS Employment survey to the earlier chart.

Employment is further broken down into full-time and part-time work, using the proportions contained in the ONS Earnings and Work Hours survey.

I have applied the same age band shading to the full-time worker data, to highlight the financial life phases. 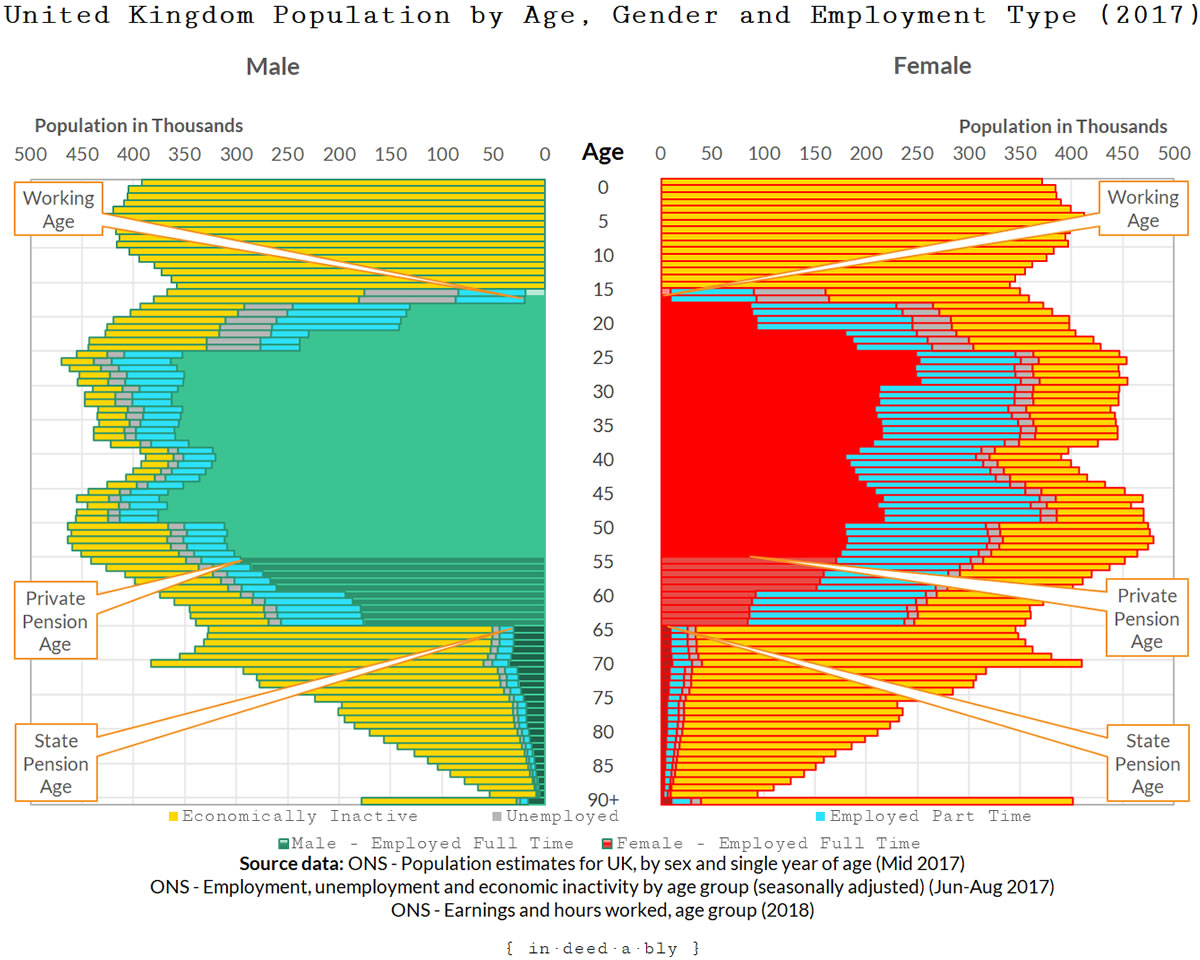 Note this results in a “crime against charts”, as the Earnings survey is denominated by the number of jobs, not the number of people performing those jobs. Therefore a person working multiple jobs would be counted multiple times.

Does it appear that half the population doesn’t work at all? This is represented by the unemployed (shaded grey), and the economically inactive (shaded yellow).

These areas do appear to represent roughly half.

Economically inactive is just a fancy way of saying not working in a paying job, and not officially looking for work either. School kids, students, “house spouses”, stay-at-home-parents, and retirees would all be considered economically inactive according to the ONS definition.

How about the claim that only just over a third of the population hold a full-time job?

To my eyes, the full-time worker segment of the chart appears to represent more than a third but certainly less than half. The claim may be a bit of an exaggeration, but it appears to be in the right ballpark.

While exploring through the maze of ONS data, I found a census dataset about countries of birth.

The current political environment is full of nationalistic propaganda about Britain being overrun by teeming hordes of foreigners. The line of reasoning behind this demagoguery is that migrants and visa holders are in Britain “taking our jobs, stealing our women, and not paying any taxes”.

I decided to validate that assertion.

A limitation of the census data is that it is starting to become dated, the last census being conducted back in 2011. To compensate for this, I derived the percentage splits by age and gender of the population born in the United Kingdom and those born elsewhere.

I then applied those proportions to the population data used for the previous charts. 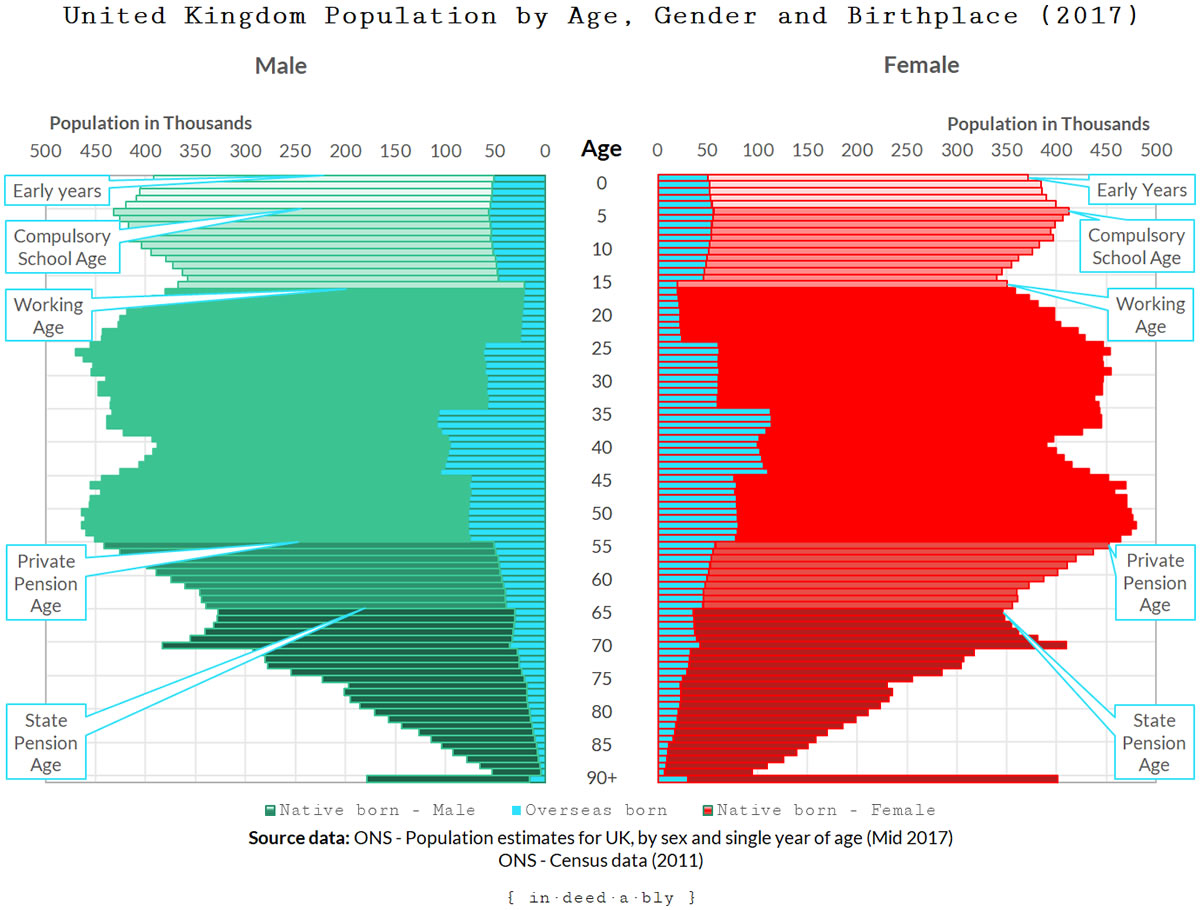 The chart does tell a story, but not one that supports the invasion of foreigners narrative. I call bullshit on that claim.

Note the birth location data is reported by age bands, rather than individual years, giving the born overseas series a stepped appearance.

Another frequently repeated assertion is that rather than Brexit-ing, London should declare independence from the rest of the United Kingdom.

The argument seems to be that a Singapore style city-state, possessing both the City and Heathrow Airport, would be an economic powerhouse free from propping up the economic “dead weight” regions located north and west of the M25 motorway.

This is an intriguing notion.

As a migrant to the United Kingdom, I don’t have the ingrained sense of tribal identity that comes from being born and raised in one of Britain’s home nations.

I reside in London, and have done so long enough to think of myself as a “Londoner”. I possess a British passport, and have learned to write British as my nationality on official forms and documents.

However I have never thought of myself as English.

It turns out this is a pretty common worldview amongst migrants to the United Kingdom.

So regardless of what I may personally think about the London independence debate, I don’t experience the same visceral sense of horror at the prospect that I suspect many born and bred English people probably do.

The next chart illustrates the population distribution by age and gender across the United Kingdom’s home nations, with London broken out from England. 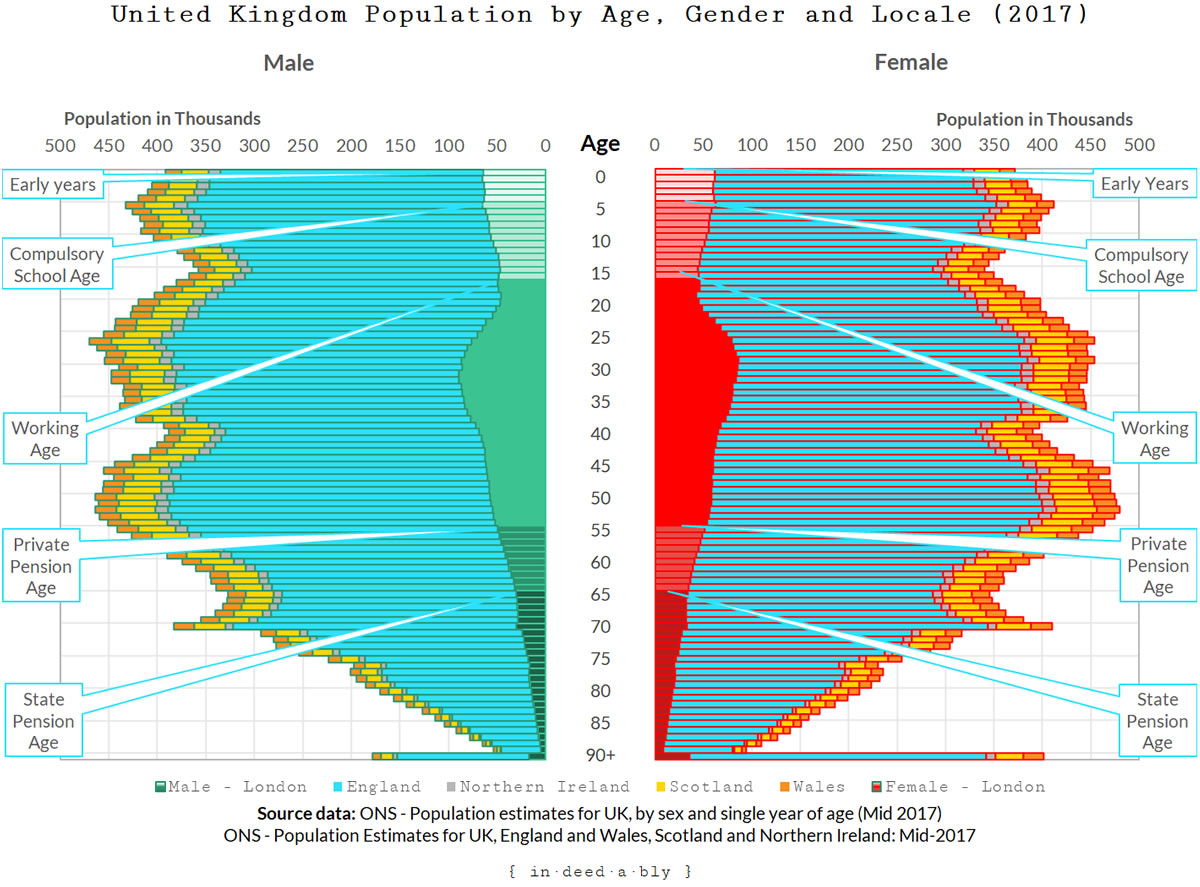 It turns out England (not including London) has a much higher population than I had realised. The population of Greater London (as defined by the 32 London boroughs plus the City of London) is smaller than I thought it would be.

According to the ONS, Greater London has nearly 9 million people currently living within it. A London city-state would have a population larger those possessed by half the EU member countries.

The London city-state would have an area of 1,572 square kilometres, making it the second smallest EU nation, between Malta and Luxembourg. It would be more than double the size of Singapore.

Would an independent London city-state make sense? Who knows. It certainly has sufficient size and population for the debate to not be dismissed out of hand.

A thought about demographic attributes

Age and gender demographic attributes were once the go-to classifiers of choice for generations of statisticians and unimaginative reporting analysts. Both were once objective and fact-based.

In an ever more complicated world, that assumption no longer holds true for either gender nor age.

Regardless of whether you believe that change represents embracing nuance and inclusivity, or indulging in ridiculous fantasy, it will certainly make demographic reporting more challenging in the future!