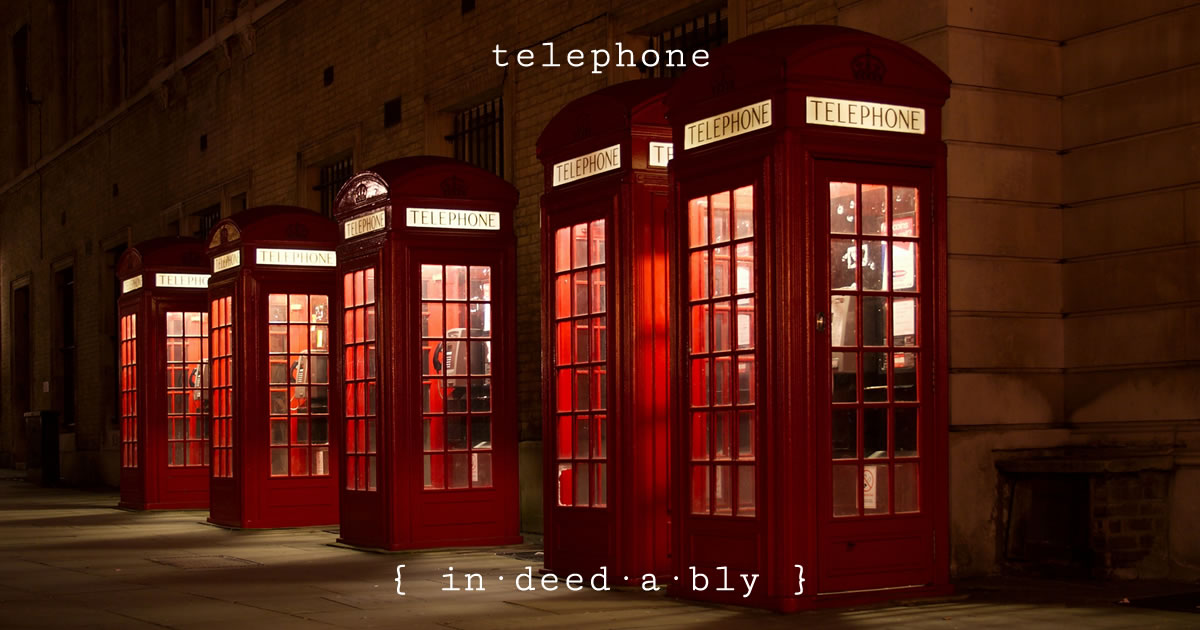 The telephone on the next desk rang.

I was momentarily startled. The sound was a blast from the past. Like the old school bell, or the siren song of a prowling neighbourhood ice cream van.

I tried, and failed, to recall the last time I had heard an office phone ring out loud. It had been years.

While we spend countless hours on seemingly endless conference calls, these are usually scheduled rather than spontaneous. We proactively dial in, rather than passively receive.

Come to think of it, I can’t remember the last time I had heard any landline phone ring.

Like many households, we have a landline number at home that we have never used. For reasons I fail to comprehend, the price of a broadband bundle including a landline was less than the price of broadband without one.

Long ago, office etiquette demanded that the nearest colleague would answer a ringing phone and take a message.

Then desk phones got voicemail.

Over time the answering someone else’s phone transcended from doing them a favour to breaching their privacy. The convention became to let it ring through to voicemail. Ringtones were muted to avoid disturbing those seated nearby.

Once hot desking became the norm, there was a reasonable likelihood you would be sitting next to some random stranger.

They would be unlikely to know when you’ll be back.

They probably don’t even know your name.

Interchangeable cogs in the corporate machine.

“Ring, ring”. The phone kept on ringing. I had forgotten how quickly that became annoying.

It had been at least two years since I had last worked at a site that actually had desk phones. Even then, they were being phased out in favour of video conferencing software like Skype.

“Ring, ring”. The incessant ringing continued. If someone hasn’t answered within four or five rings, they are clearly not there or don’t wish to be disturbed.

These days everyone uses mobile phones.

Yet most communication is via text or email.

At some point phoning people became intrusive. Rude even.

The presumption of the caller that whatever they want is more important in that moment than whatever the receiver might happen to be doing.

Of course, you didn’t have to answer.

However, that too used to be considered rude.

These days, call screening is the default behaviour. How often do you actually answer a call that you weren’t expecting? Particularly from an unknown number?

We have long been taught that it is poor form to drop in at someone’s home unannounced. They might be entertaining guests. Or be in bed. Or have not had a chance to tidy up before company arrives.

Today that same expectation applies to spontaneously calling someone. Tolerable (at best) for family or close friends, but the less well you know somebody the more it is frowned upon.

“Ring, ring”. The phone rang and rang. I looked around the office in the forlorn hope that somebody else would make it stop.

My first week on site. I wasn’t yet familiar with the client organisation’s customs and culture.

I didn’t work for them.

I don’t represent them.

“Not my circus, not my monkey”.

Glancing at the caller id, I saw it was an American number calling.

I did some quick time zone maths. It was stupid o’clock in the United States. All the sensible folks would still be tucked up in bed.

I remember as a kid the rare occasions the home phone would ring after 8pm. My parents would exchange worried glances. Back in their day, an evening call meant bad news.

A death in the family.

Somebody needing rescuing. Or bailing out.

Life or death stuff. Anything less could wait until morning.

Today, the majority of the calls my mother receives are from robo-dialling scammers, originating from overseas, well beyond the reach of “do-not-call” lists and telecommunications regulations.

Once again demonstrating that nation state rules have been superseded by a globalised world.

The scammers don’t care about her telephone calling etiquette. They call first thing in the morning. During dinner. Occasionally in the middle of the night.

Yet still she answers. It might be important. Some distant cousin or childhood friend may have died.

Mostly she answers because she worries that if she does not, then people will stop calling.

A scary prospect when you are elderly and living alone. The more interconnected the world becomes, the more commonplace loneliness seems to be. Irony, or just the law of unintended consequence? Hard to say.

I answered the ringing phone.

It was a wrong number!

Turned the volume on the ringer all the way down.

Then disconnected the cable from the back of the phone for good measure.

I hate phones. Always have.

The day I got my first iPhone, I had attempted to delete the Phone app from it. Having the internet in my pocket was very useful, but being contactable all the time was a high price to pay!

I don’t understand those folks who accept a mobile phone from work.

Or those who have their own mobile configured so they can check their work email at any time of the day or night.

There are vanishingly few jobs where somebody will actually die if a routine workplace matter is not dealt with immediately. For once I concur with my mother, the rest can wait until the next working day.

Later that day the helpdesk guy tried to give me a client issue smartphone. I politely declined.

His face wore a dumbfounded “does not compute” expression.

I referred him to one of the legal precedents that sometimes get cited when determining if a person performing a role is an employee or a contractor.

“It is acceptable for a contractor to mutually agree to execute a particular task at a specific time and place with the client, but he should not be subject to any control or supervision from the client; it should be clear that the contractor is able to execute the work according to how they decide.

Alternatively, an employee will probably be told where and when the services should be delivered”

I’m not the client’s employee.

I don’t have to ask their permission or seek their approval.

Nor do I have to be contactable at all hours of the day or night.

They engaged me to solve a tricky problem on their behalf, and are paying a premium for my services. Now they just need to step aside and let me get on with it.

Happiness and sanity demand boundaries. We may need to sell off some parts of the day to our employers, but the rest still belong to us.