Bob frantically rummaged through his wardrobe for his formal gown. It was gone!

Some thieving bastard had “borrowed” it. Again!

Normally such an event would be a minor inconvenience. Today it was a disaster.

The formal dinner in the Great Hall was about to start, and they turn away late arrivals.

Normally he would just skip it, and grab some food elsewhere.

He could go to the dinner without the gown, but doing so was frowned upon. He would cop some snide condescension and casual racism about being an uncultured colonial. Business as usual.

Worse still, it incurred a penalty.

Students violating the Great Hall’s arcane and pretentious etiquette rules were required to stand in front of the assembled diners and consume a tankard of ale in less than 25 seconds.

Drinking beer was no great hardship.

In fact beer was the staple item in Bob’s diet.

It also the reason for Bob’s current dire financial circumstances!

The problem was the offender had to pay for the beer, and pay double if they failed to consume the roughly two and a half pints within the prescribed time limit.

And Bob had no money.

Several weeks before, during a particularly heavy night’s drinking, Bob had been regaled with some of the ancient (and frankly ridiculous) Oxford traditions that are blindly followed to this day.

One such tradition was the accused student had the right to challenge their penalty. When such a challenge was issued, both of the student and the “sconcemaster” issuing the infraction, had to skol a tankard of ale.

The penalty was waived if the student could drink it fastest.

Deciding he had nothing to lose, Bob dashed out of his room and headed for dinner in the Great Hall.

The rest is history.

As expected Bob was penalised, then successfully downed the tankard of ale faster than the “sconcemaster”.

In fact, faster than anyone in recorded history. Talk about motivated!

Many years later Bob became Prime Minister of Australia. He credits the beer drinking world record as being the single largest contributing factor to his popular appeal. It is certainly what he is best remembered for!

A close second however, was Bob’s infamous promise:

“by 1990 no Australian child will be living in poverty”

It was a noble goal, but as any junior consultant quickly learns, you should never commit to a deadline that you aren’t absolutely certain you can comfortably meet.

A decade later British Prime Minister Tony Blair dug himself into a similar hole with the promise:

“And whilst there is one child still in poverty in Britain today, one pensioner in poverty, one person denied their chance in life, there is one Prime Minister … will have no rest… until they too are free.”

Poverty is a bit like pornography, in that it is hard to define but easy to recognise. For example:

The United Nations defines the poverty line as being “the amount of money necessary to meet basic needs such as food, clothing, and shelter”.

This approach uses an absolute value: what it costs to survive. That is certainly definitive!

The World Bank set the international absolute poverty line at USD$1.90 per person in 2011, which at the time of writing was the equivalent of USD$2.18.

For the United Kingdom that equates to roughly £630 per person, per year.

Once those essential needs have been met, the topic of poverty become incredibly subjective.

Some folks may argue surviving is enough. Worrying about issues such as quality of life and social exclusion are a luxury, reserved for those who already have enough to eat and a safe warm place to sleep.

Others argue survivorship alone is not enough, everyone should have the opportunity to thrive.

Until recently, the “poverty line” was officially defined in the United Kingdom as households earning less than 60% of the median equivalised household disposable income.

In 2017 that United Kingdom median household disposable income figure was £27,300, which in turn meant poverty line would have been set at £16,380 under the old definition.

That £16,380 is much higher than the World Bank and United Nations absolute poverty levels!

Does that mean the United Kingdom has a posher class of extremely poor people? Probably not.

Or maybe, as a society, Britain (used to) generously set the bar for “enough” at a higher level than much of the world?

Or perhaps a more likely explanation is that survival in the United Kingdom is an expensive business!

Poverty is measured by income… 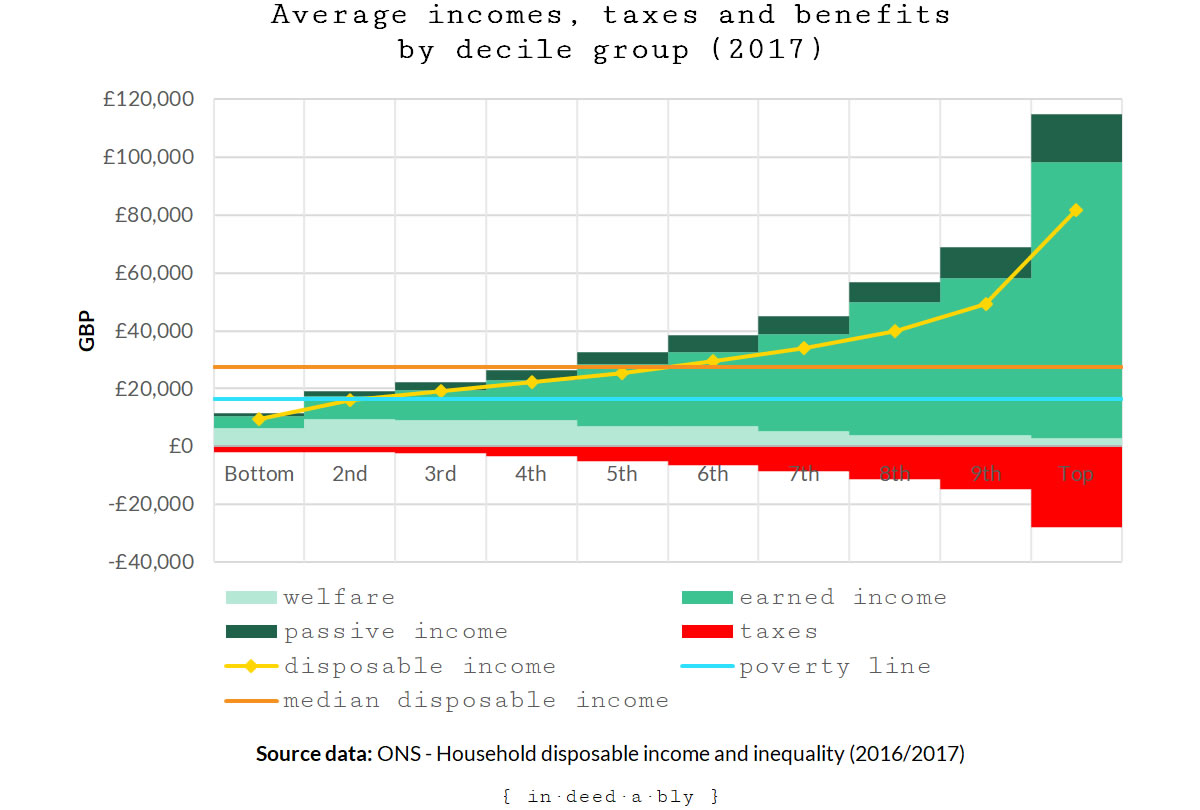 The vast majority of the population landed above the old poverty line. This is by design, but is good news nonetheless.

A disheartening thing the figures reveal is nearly two-thirds of households receive more income from welfare payments than investments.

… but expenditure determines their adequacy

One criticism of using income figures as a poverty measure is that it only tells part of the story.

Income levels are interesting, but without also factoring the cost of living, we cannot assess their adequacy. 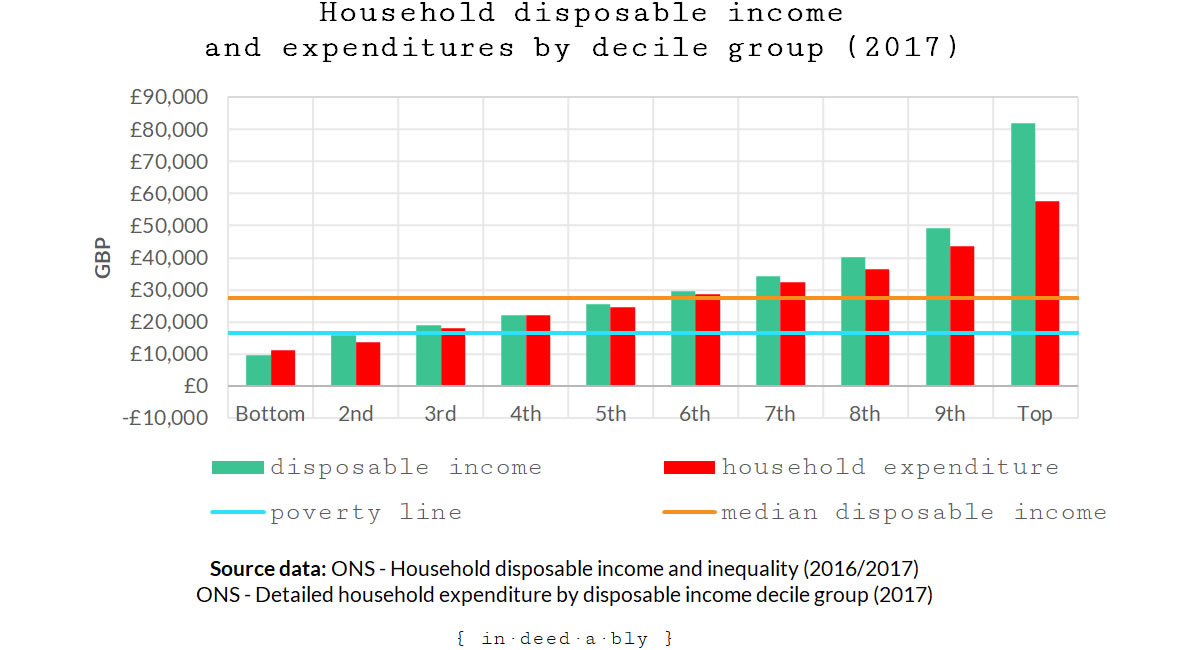 Alarmingly, the bottom decile group spend more than they earn, and earn less than the poverty line. Witness the poverty cycle in action.

If the poverty line represents the bare minimum that a household needs to earn to survive, then the bottom two decile groups are certainly doing it hard.

The earnings of the fourth decile group may exceed the poverty line, but their average expenditure slightly exceeds their earnings. That is not a recipe for financial success!

Savings rates are a key metric for financial wellbeing. Somebody smarter than me once said “it isn’t what you make, it is what you keep that makes you wealthy”.

Different people have different methods of calculating savings rates, but fundamentally they all seek to measure the proportion of earnings that are retained. 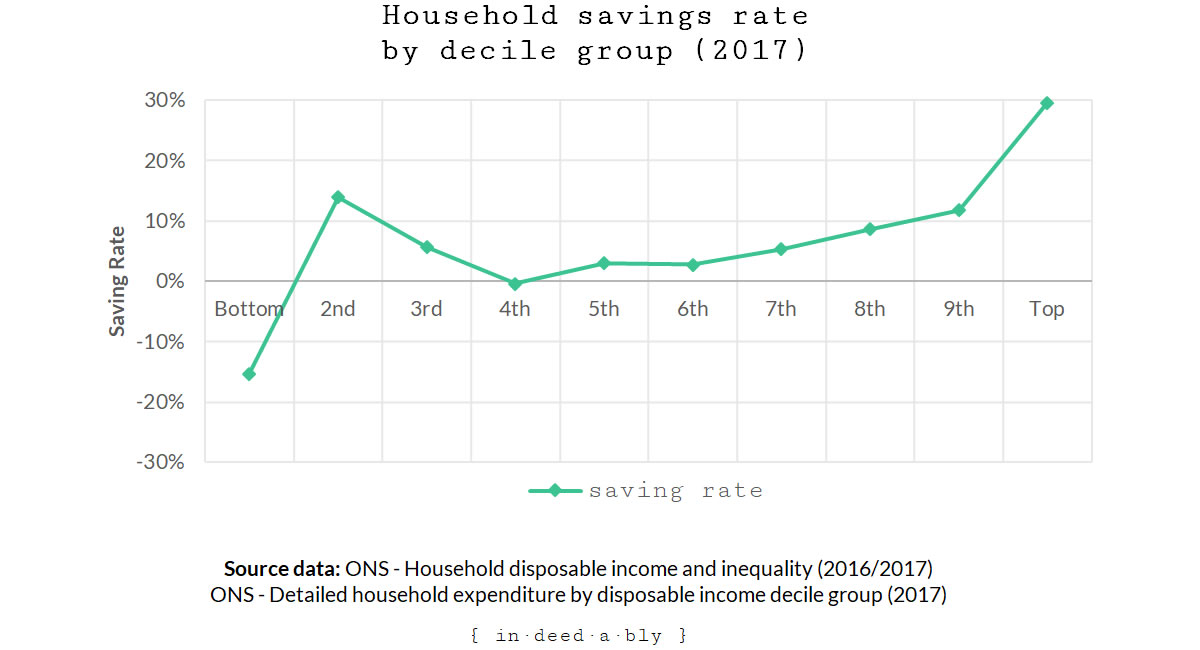 The second decile group is an interesting one. As expected their average earned income figures are roughly halfway between those of the bottom and third decile groups.

However on average the second decile group receives significantly more welfare than either the bottom or third decile groups, specifically in the form of housing benefits; working and child tax credits; and employment and support allowances.

As noted the fourth decile group on average doesn’t save anything.

The savings rates of the fifth, sixth and seventh decile groups are negligible. These were Theresa May’s “just about managing” households: spending almost all that they earn, and only a sneeze away from financial oblivion.

The ninth decile group has an average saving rate of 12%. In the wise words of Young FI Guy:

“Financial Planners don’t agree on much, but they all agree that a saving rate of 10-15% just isn’t enough”.

Only the top decile has a decent average savings rate, in the region of 30%.

Is Financial Independence possible for everyone?

I believe the financial approach required to achieve Financial Independence should be applied by everyone.

The fundamental principles introduce good financial discipline. They create a margin of safety to help households weather the inevitable financial shocks that occur throughout life.

Once these basic behaviours are established, go invest your time in something that adds value to your life.

Financial Independence is NOT possible for everyone

Unfortunately there are a lot of myths and misinformation that get perpetuated under the banner of Financial Independence.

One such myth is that achieving Financial Independence is a possibility for everyone.

Looking at the disposable income and expenditure statistics above that clearly is not the case.

The average household disposable income earned by the bottom three decile groups is near or below the poverty line. This means that approximately one-third of all households are struggling for their very survival.

While the disposable incomes of the fourth and fifth decile groups do exceed the poverty line, they are still materially less than the median household disposable income level. They are surviving, but for the most part are struggling to make ends meet.

With good financial discipline, the fourth and fifth decile groups should be able to save a small portion of their incomes. However to claim the meagre savings rate possible at this income level make Financial Independence a realistic possibility is disingenuous.

By definition these bottom five decile groups contain half the population.

It is dishonest to pretend that these folks are going to be able to save their way to financial independence.

Everyone does have the option of investing in themselves.

Of increasing the marketable value of their time.

Of improving their earnings prospects as a result.

Many of those at the lower end of the earnings spectrum are already paddling very fast just to keep their heads above water. While “invest in yourself” sounds simple in practice it is far from easy.

That is not an excuse to not do it however!

Making sacrifices when there is a realistic chance of achieving the desired outcome is potentially a worthwhile endeavour.

The day beer loving Bob Hawke became Prime Minister he went teetotal, remaining “on the wagon” until he left office eight years later. He viewed giving up alcohol as a necessary sacrifice for achieving his goal, leading his nation to the best of his abilities.

However where a goal is an unrealistic pipe dream, the making of those same sacrifices would be a foolhardy waste of time and energy.

There is a reason many of the Financial Independence writers come from high earning while collar professional backgrounds.

You don’t have to make big money, but it certainly helps!