“My house must be worth over one million dollars!” crowed my elderly mother.

She had recently joined her long time neighbours in watching the auction of a property located down her street. My mother was quick to point out that the house had been smaller than her own. Not as well laid out. Very dated inside. The outgoing neighbour hadn’t updated the décor since the 1970s, when chocolate brown, burnt orange, and lime green had been the height of fashion.

Much to their delight, a bidding war had erupted. The final bid was enough to launch the seller into the ranks of the “two comma club”!

One of the bidders was an amateur landlord. Planning to convert the suburban home into a group house for up to a dozen fly-in commuters, who flock to the city to kick start their professional careers.

Their competition was a young family. Heavily backed by the “Bank of Mum and Dad“, spending an advance on their inheritance to house their growing tribe. The self-contained “granny flat” behind the garage provided the grandparents with a modicum of hope that there was an alternative to being consigned to the aged care exit lounge, once they could no longer look after themselves unaided.

The beauty of a property auction is the contract certainty it provides. No chains. No changing minds. Buyers hoping to score a bargain. Sellers wishing for overeager bidders to inflate the sale price. Once the hammer falls, the deal is done. Both parties committed.

A couple of decades ago my parents had moved into their “forever home”. The worst house on a street with a nice view. Located in a shabby suburb that, while never fashionable, was by then well past its prime.

At that time, most of the houses on the street contained owner-occupiers at a similar stage in their lives. Careers topped out. Children about to leave the nest. Mortgages nearly conquered. The prospect of retirement evolving from an abstract concept to being visible on the horizon.

In the years that followed, my mother provided a running commentary on the comings and goings on her street.

Early on, it was random “life happens” events that had thinned the herd.

Later, it was retirement age residents seeking a higher quality of lifestyle. “Treechange” or “seachange” were popular choices. Relocating to small beachside villages or rural towns, once they no longer needed to worry about sabotaging their children’s educations or finding paid work locally.

The composition of the neighbourhood gradually changed.

Public transport services were steadily reduced as demand dwindled. Now a single meandering bus route runs once per hour. Passengers arm themselves with a packed lunch and a good book before boarding, on a good day the ride takes more than an hour to reach the nearest transport hub. A ten minute journey if taken by car.

The neighbourhood shopping centre contained more empty shopfronts than occupied stores. The new breed of locals preferring to dine, shop, and socialise in more fashionable surroundings. Gone were the days of the neighbourhood being full of stay at home parents, university students, and retirees.

Car parking had become a problem. Garbage bins up and down the street overflowed. Far more residents now lived on her street than the local infrastructure could comfortably cope with.

This most recent house sale meant there were now only a few of her original neighbours remaining. Her address may have remained the same, but the neighbourhood had markedly changed.

Yet here is the thing. The city’s population had grown by more than 40% since she moved in.

To accommodate all those new arrivals, the city had rapidly expanded.

Urban sprawl on the affordable outskirts. Gentrification and urban infill closer to the centre of town.

Without moving an inch, my mother’s house had steadily become better located, as the local citizen’s perception of what represented a “good” commute gradually evolved.

As those perceptions changed, so too did the market value for the housing blocks on her street.

Which brings us to this week, when those market prices exceeded an arbitrary round number.

Suddenly that worst house, on the street with a nice view in a tired unfashionable suburb, had her feeling like she had joined the ranks of those living on Kensington Palace Gardens, Nob Hill, or The Peak.

Providing bragging rights and a warm fuzzy feeling for those long term neighbours.

I was thrilled for my mother. It was fantastic to hear her happy with her neighbourhood, rather than focussing on the changes that had adversely impacted liveability, the polar opposite of progress.

Later that day it occurred to me that my mother’s feeling of wealth and prosperity due to rising property prices was largely a carefully crafted illusion.

On paper, her net worth had increased.

Yet accessing this newfound wealth would require her to sell up or extract equity via a loan. Neither of which was a desirable outcome.

The value of all the surrounding houses would have appreciated at much the same rate. This meant gains made from selling one property were cancelled out by the higher asking price of the next one.

Those seeking to climb the property ladder require even more funds. Better location or larger block size incur a larger price tag. One that rising property values are likely to similarly have inflated.

Owner-occupiers only win the game when they downsize. Selling up their appreciating property, then buying a smaller or less desirably located property. The remaining sale proceeds could then be used to finance lifestyle choices or accomplishing bucket list items.

The other cohort of winners from rising property prices are inheritance beneficiaries. Being gifted a potentially tax-advantaged former principal place of residence, free from stamp duty taxes on the title transfer. The higher the property prices, the larger the windfall gain.

According to Zoopla, back in the late 1980s, the average British owner-occupier moved home once every 8.63 years. By 2017, that average rate of homeownership turnover had slowed to once every 23 years.

This meant that for many, their “starter home” acquired as first home buyers became their “forever home” by default. I wondered why this might be?

Had people suddenly become more accepting and content? If the level societal discord that has been exposed by movements such as Black Lives Matter, Brexit, and Scottish Independence is anything to go by, the answer is probably not.

Perhaps the clichéd growing family’s desire for more space had been solved by simply not having as many kids?

Fertility rates have fallen by 10% during that period, from 1.82 live births per woman in 1988 to 1.65 last year. That would account for some, but certainly not all of the less frequent house moves.

My next thought was transaction costs. The top rate of stamp duty has risen from 1% to 12% during this period (15% for those who already own another property). Those rates can be misleading however, as in practice stamp duty is applied via tiered pricing bands.

I looked up the historical stamp duty bands and rates. Then I applied them to the Nationwide average house price dataset to see how transaction costs had changed over time. The rate has bounced around on the whims of vote buying politicians, ranging from nothing to almost 1% of the house price. 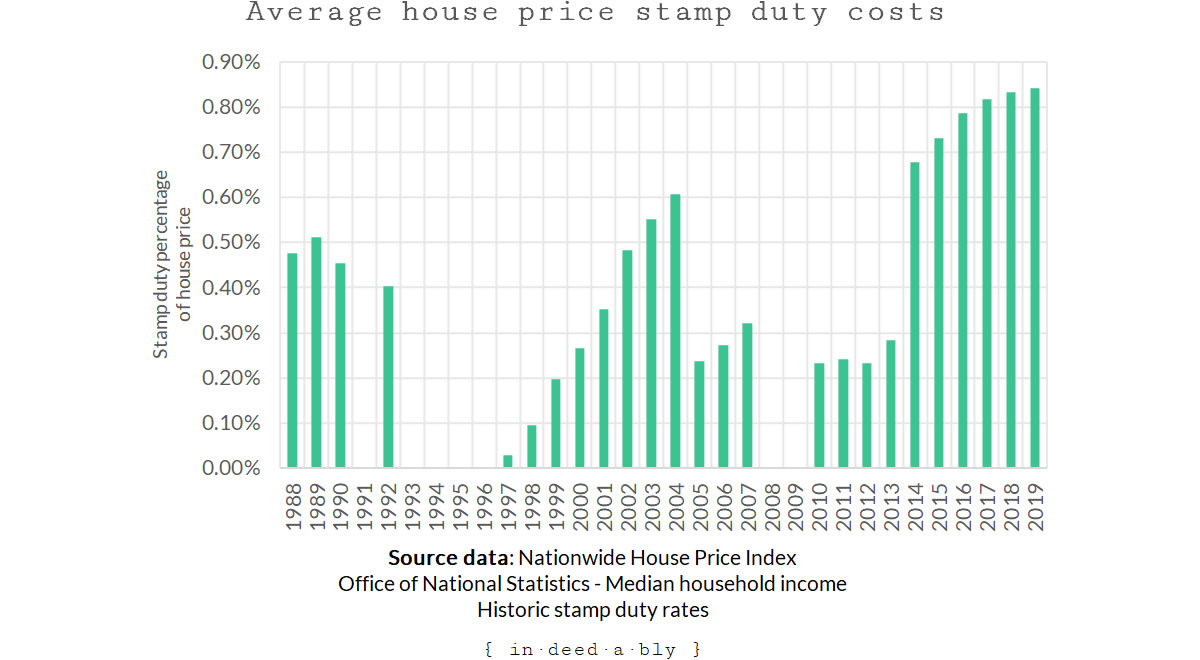 That was interesting, but that “average” house price doesn’t buy much more than a car parking space in much of expensive London. I wondered how my mother’s property millionaire status would have played out here?

Starting with a notional £1,000,000 property in today’s money, I determined what the inflation-adjusted value would have been for each year back to 1988. Once again I applied the historical stamp duty bands and rates to those values. This time the stamp duty cost nearly 6% of the house price! 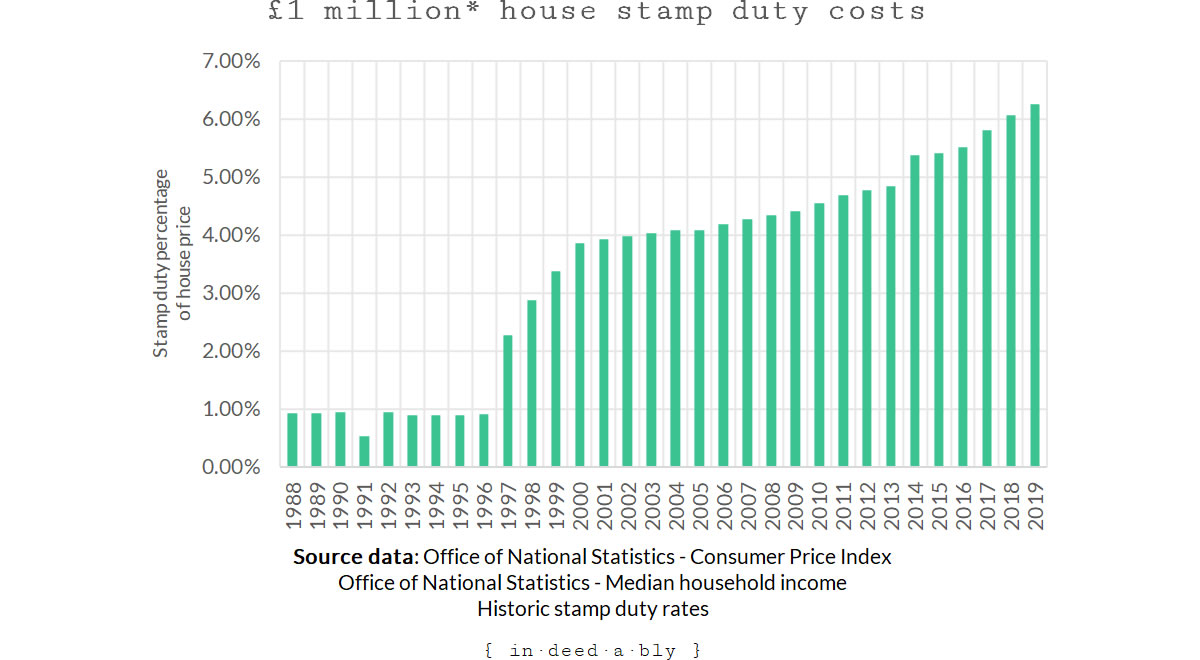 Next, I got curious about how much those amounts equated to in terms of time investment? I looked up the historical median earnings dataset and calculated how many working weeks were required at median earnings to cover the stamp duty costs of a property purchase.

For the average house price, it ranged from nothing to a little over three working weeks. 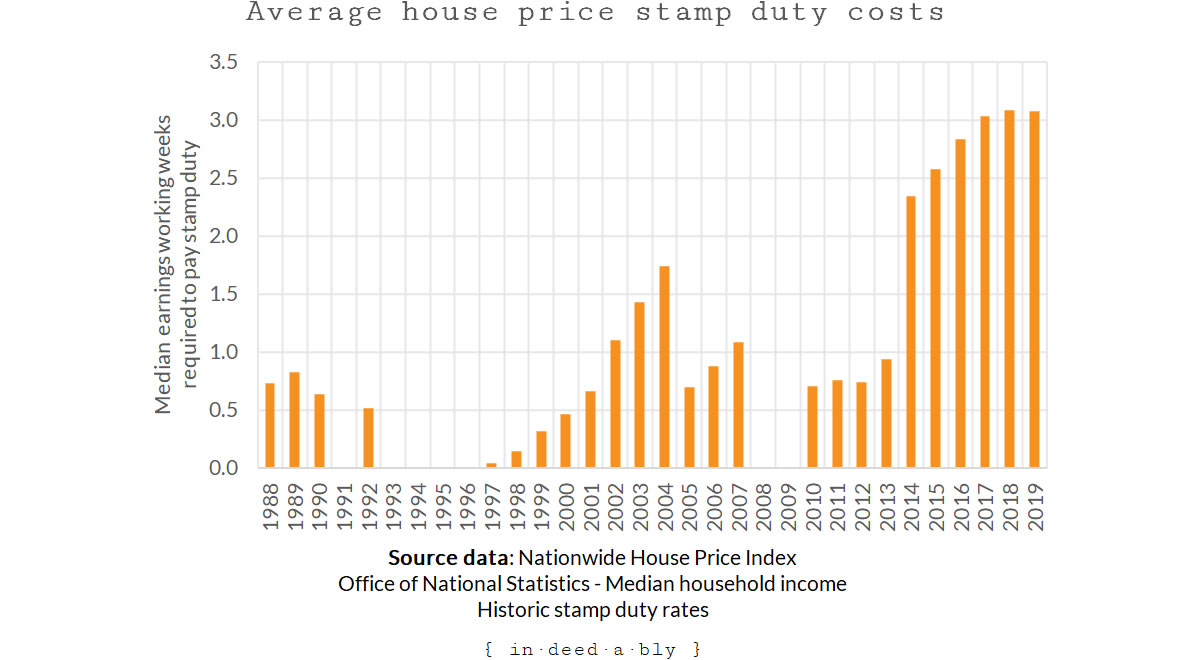 For the million pound house however, the median earner would need to work for more than two years just to pay the stamp duty taxes incurred on the purchase! 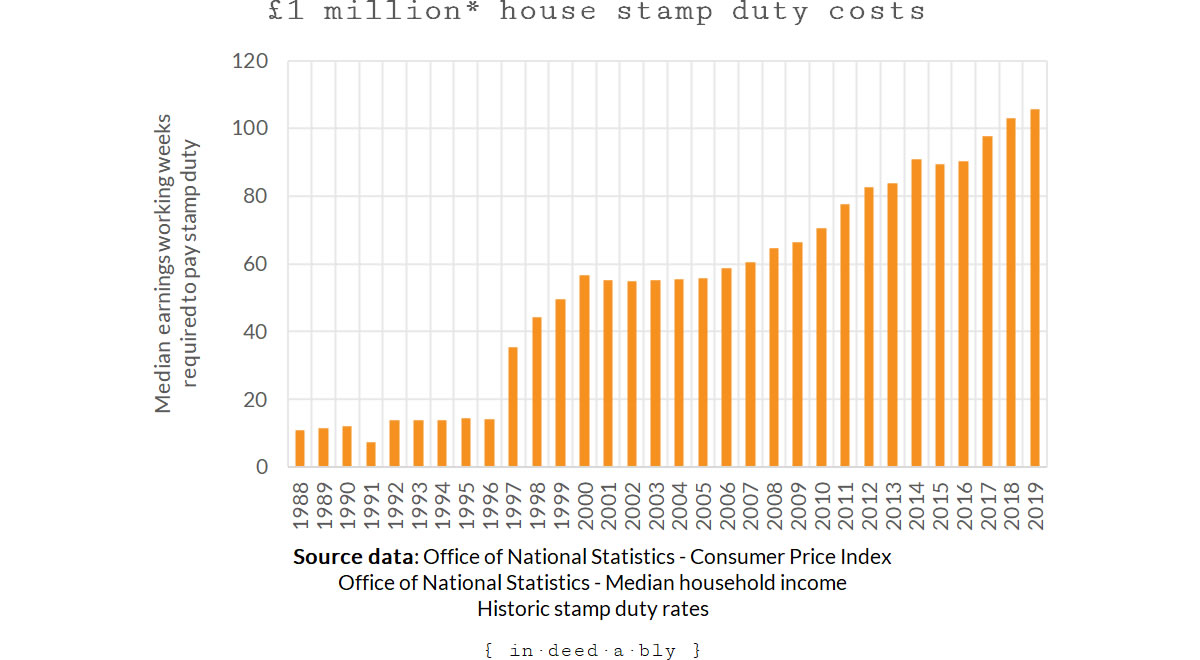 Pulling those two measures together, we can see that the transaction costs of purchasing a house have soared over the time period. First the average priced house. 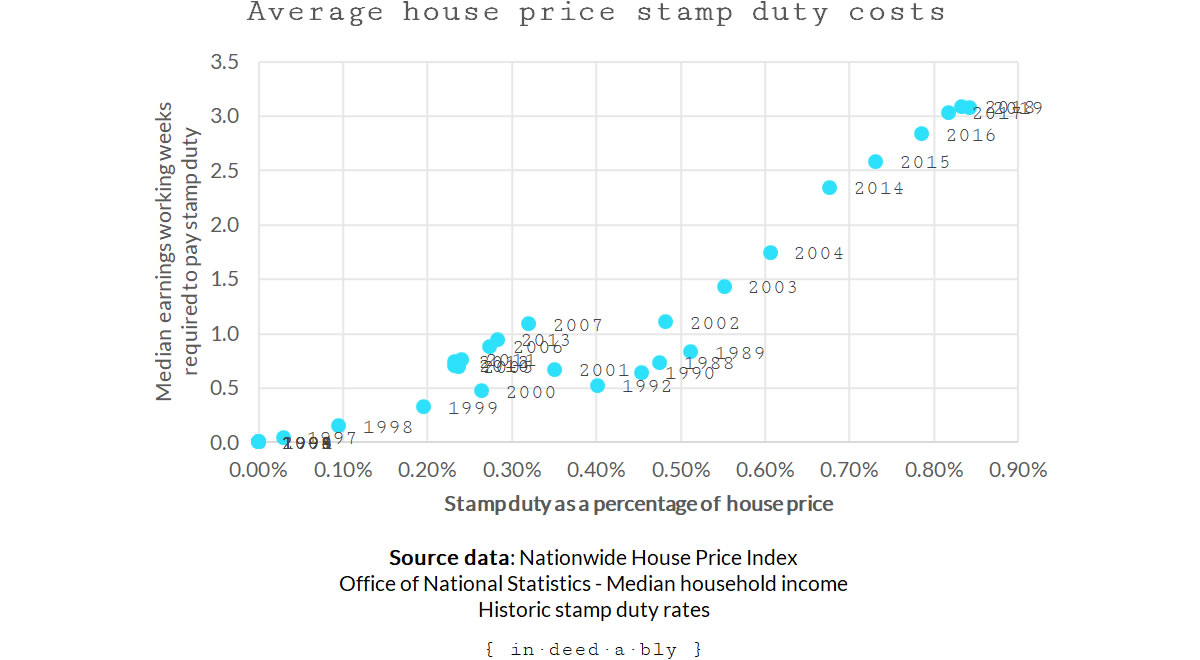 Then the million pound house. When the amount of effort required to pay transaction costs can be measured in years, it raises some troubling questions about the financial viability of the owner-occupier lifestyle choice. 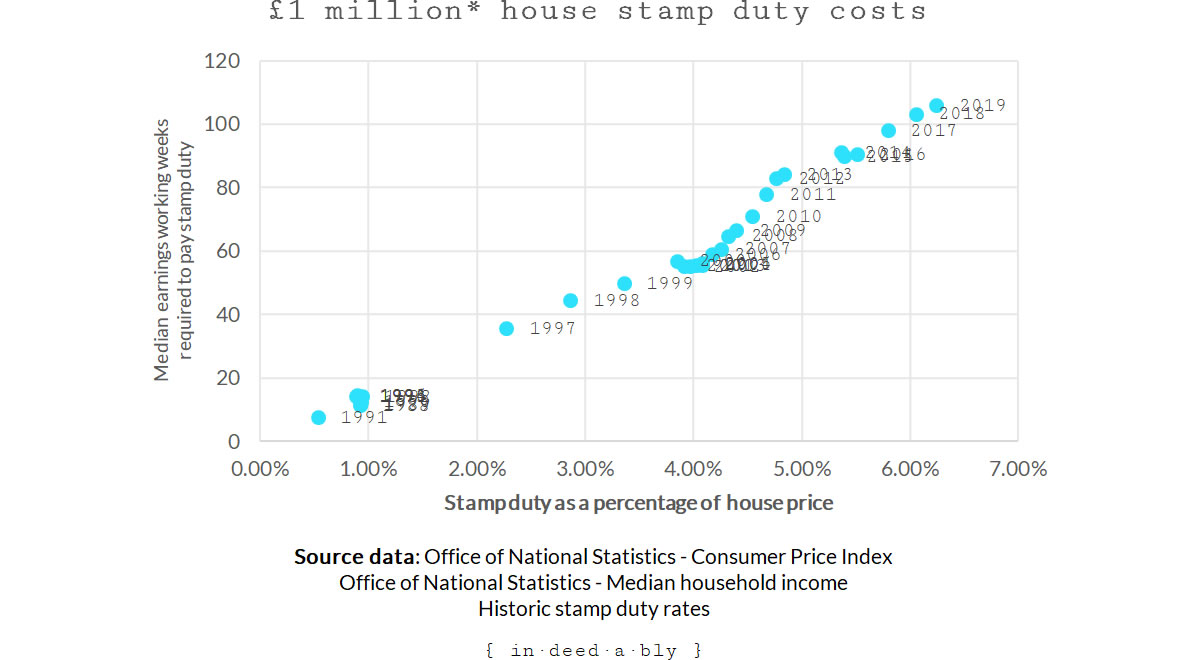 In reality, those wanting to purchase a million pound property are likely to be earning far more than the median household income. Even for those on higher incomes, the transaction costs associated with property purchases in the United Kingdom are non-trivial.

From a young age, we have been conditioned to unquestioningly accept certain popular myths about home ownership.

That homeownership is always superior to long term renting.

That the property market is a ladder. Implying we must climb successive rungs toward our the ultimate destination. Those Zoopla figures suggest that ladder has become a short one for many of us, little more than a single step in some cases.

I wonder whether we would be so accepting of that narrative, were the true cost of purchasing property expressed more clearly?

Buying that million-pound house would mean choosing to effectively pay 100% of your income for months or entire years in voluntary additional taxes.

Or, to express it another way, that the buyer would be voluntarily postponing their potential retirement date by up to several years just to earn enough to pay those transaction costs from their after-tax earnings.

Which brings to mind a mantra that we should all be conditioned to accept: adopt a “buy and hold” approach to minimise transaction costs incurred by churn.

There will come a time, in the not too distant future, when the frailties of age make the downsizing decision for my mother.

Regardless of whether her guesstimate of her home’s value are realistic or aspirational, at least she will be free to enjoy all of the proceeds. The jurisdiction in which she resides has eliminated stamp duty, opting instead for a recurring value-based land tax which reduces friction for property buyers and creates a more predictable revenue stream for the government.

Sydney recently announced they were adopting a similar approach, making it the latest major city to abolish stamp duty.

We should do the same in the United Kingdom.