Britain. A dangerous and exotic land mysteriously located across the ocean on the edge of the world.

That is how Julius Caesar perceived it 2000 years ago, while his Roman legion was conquering Gaul.

The Gauls didn’t much like the idea of being conquered. They fought back, with some help from British allies.

Gaul became part of the empire.

Caesar’s attention moved to across the British Channel.

The following year Caesar invaded. After a couple of attempts, a puppet king was appointed and tributes agreed.

In Rome, a mad demagog named Caligula was now the emperor. He had wrestled much of the political power from the Senate, slept with his sisters, and appointed his horse to the priesthood.

The Senators didn’t think much of this. In a political tradition as old as time, they stabbed him in the back.

Any record of the horse’s theological insights has been lost over time.

An unlikely candidate named Claudius was thrust upon the throne.

Nobody much liked him. He was viewed as the least worst compromise.

In need of a quick win to firm up a shaky power base, Claudius followed another ancient political tradition. He promised a swift decisive military victory and invaded a weaker foe: Britain.

The southeast of what we refer to today as England was quickly (re)conquered.

It took a generation to subdue the residents of what we now call Wales.

The Romans argued with the occupants of what is now Scotland for 80 years and got nowhere. Eventually, the Romans gave up and built a wall to keep them out.

On discovering a likely spot to cross the river Thames, the Romans built a bridge and established the settlement of Londinium.

Londinium prospered for 20 years, until Queen Boudicca burned it to the ground in protest over Roman plans to annex her kingdom into the empire.

That didn’t end well. There is a reason you don’t hear about the descendants of Boudicca and her Iceni people.

The Romans started over. Soon Londinium was a thriving centre of commerce and trade. To address the defensive weaknesses of the past, they constructed a formidable stone wall around the town.

Fall of the Roman empire

The Roman empire had grown too big and costly to administer effectively.

The Eastern half of the empire was spun off. Smaller, leaner, and saddled with less accumulated technical debt than its lumbering former parent, the Byzantine empire thrived for a thousand years.

Meanwhile, the remaining Western half of the Roman empire struggled.

Their economic system was built on low-cost slave labour, fuelled by constant conquest and subjugation.

The once feared Roman legion had largely been outsourced to lowest-cost mercenaries. Fearsome and talented, but only as loyal as their next pay.

The empire was hollowed out from within, leaving a brittle shell that was vulnerable to external attack.

And attack they did.

Being located on the “edge of the world” meant the Roman forces in Britain were at the end of a lengthy and vulnerable supply line. As the empire’s troubles grew, logistics became less reliable.

With no pay, supplies or prospect of reinforcements, the Romans in Britain abandoned Londinium.

At some point, the Saxons settled around the outside of the of Londinium’s abandoned walls. They established a town called Lundenwic.

The Danes raided and pillaged Lundenwic. A decade later they returned to burn it down.

For 150 years, ownership of Lundenwic alternated between Danish Vikings and Saxons. Sometimes control was gained in battle, other times by inheritance.

At some point, the Saxon king Alfred the Great decided to relocate from Lundenwic back inside Londinium’s far more defensible Roman walls. The town was renamed Lundenburh.

All that flip-flopping and uncertainty over ownership came to an end when William the Conqueror invaded. The Normans surrounded Lundenburh, cutting off supply lines and hopes of reinforcement.

Ever a city of traders with an eye for the best deal, the leaders of Lundenburh haggled.

In return for surrendering the city without a fight, William granted the London Charter of Liberties, changing Lundenburh’s name once more.

The Charter was unique at the time. London was free from the obligations, taxes and whims of local nobles or the church. The ability to self govern and set its own taxes provided a massive competitive advantage.

In practice, London’s inhabitants answered only to the crown. Sometimes, not even the crown.

Since that time London’s interests haven’t always aligned with those of the Crown and the Kingdom.

Nearly 600 years after the Charter was issued, the King requested London extend its special privileges to the surrounding suburbs and towns that had formed to support its thriving economy.

The City of London responded with the “Great Refusal”.

Over the subsequent decades, a couple of monarchs attempted to reign in London’s powers.

The first lost his head.

The second his throne.

The replacement monarch repaid London’s support with a Second Charter that stated:

London’s appetite for trade and riches exceeded what could be satisfied by the Crown. It ruthlessly sought mercantile opportunities beyond the shores of Britain, establishing the East India and Hudson’s Bay companies. Collectively these companies came to dominate trade and control vast portions of two continents.

These privately sponsored endeavours led to the establishment of the British Empire.

At its peak, London was the largest city in the world.

The centre of an empire covering a quarter of the globe’s landmass and population.

Fall of the British empire

German bombs damaged or destroyed a sixth of London’s buildings.

One of the founding principles of the United States was the freedom to drive a hard bargain. Like London, the Americans loved nothing more than maximise profits.

Sensing Britain was in a weak bargaining position, the Americans proposed a set of guiding principles governing how the world would be divided up after the war, if the Allies won. One of those principles effectively promised to dismantle the empire by agreeing to grant “the right of all people to choose the form of government under which they live”.

During the negotiations, Churchill reluctantly signed up to this Atlantic Charter.

Even so, Churchill failed in his attempt to get the United States to join the war. It took the Japanese attack on Pearl Harbour a few months later to change their mind.

The fall from global power to opinionated small island was swift. This was mirrored by America’s rapid rise from an inward-looking sleeping giant to superpower.

With the empire crumbling, London switched its focus to dominating the world of Financial Services.

In recent times there has been a great deal of debate about the political shape and future of Britain.

Devolution delegated a wide range of powers from the national government to the nations of Scotland, Wales,  and Northern Ireland.

38% of eligible voters sought Scottish independence during a 2014 referendum. This accounted for almost half of the people who cast a vote.

37% of voters wanted Britain to exit the European Union during a 2016 referendum. That was slightly more than the number of people voting to remain, while 28% of eligible voters didn’t bother voting.

A take away from those votes is that a vast portion of the electorate is either not wedded to the status quo, or simply don’t care.

Given the appetite for change, what might happen if London remained true to form, and put its own financial interests ahead of those of the rest of the United Kingdom?

According to a 2016 study, London contributes 30% of all tax revenues to HM Treasury.

That is more than the next 37 largest cities in the United Kingdom. Combined.

London is one of only three regions of the United Kingdom that makes a net positive fiscal contribution per head of population to the economy. The remaining regions are all net takers. 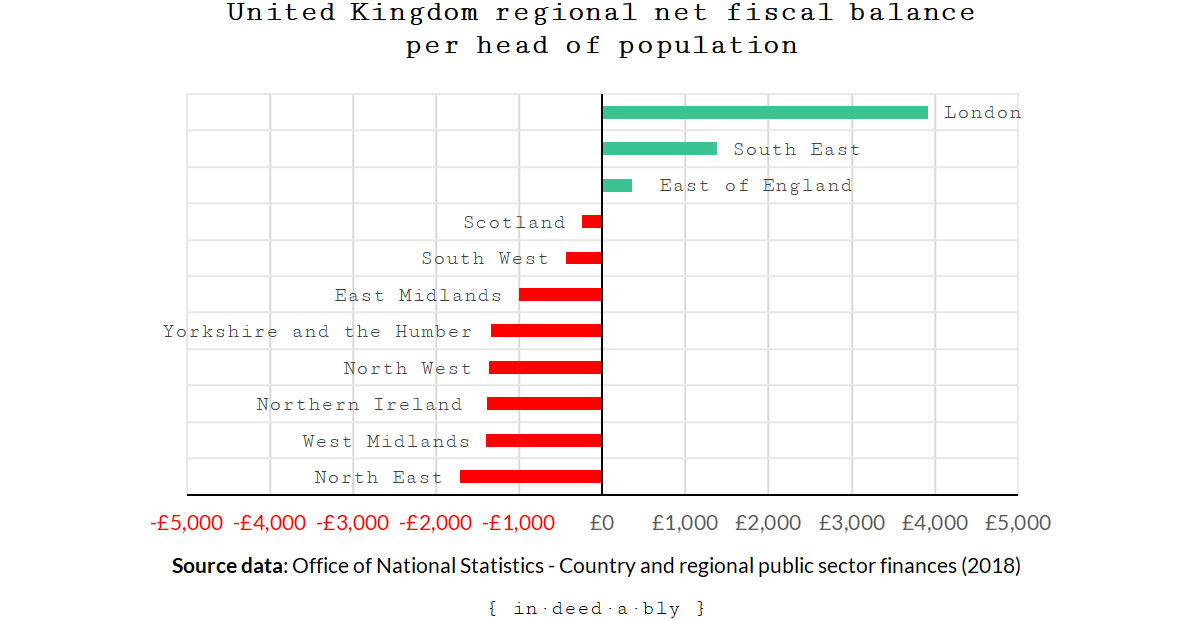 This raises the intriguing question: could London’s future prospects be materially improved by leaving the United Kingdom?

To establish itself as an independent city-state hosting a global financial centre?

London’s commercial interests have often been at odds with the interests of the crown, and the rest of Britain. From the backing of George Washington during the American War of Independence, to almost bankrupting the country and collapsing the financial system during the Great Recession.

London’s vast banking and financial services industries are dependent on low friction access to international markets. The majority of London’s population voted to remain in the European Union during the Brexit referendum.

An independent City of London would be slightly larger than Monaco, and nearly six times the size of the Vatican. Both are viable nation-states.

However, with only 9,500 people living within the City boundaries, there would be a scarcity of skilled labour required to operate London’s financial markets.

Much of London’s lucrative Financial Services industry work is today conducted outside of “the square mile”. A more sustainable independent London would likely require reversing the “Great Refusal”,  and expanding the boundaries of the City of London to include all of Greater London.

That would increase the population to over 8,000,000 people. It was also mean an independent London included airports, cultural amenities, hospitals, schools, and universities.

When I first considered the concept of an independent London, I dismissed it as a silly idea. However, as the Brexit process rapidly descended from farce to shambles, I found myself returning to the notion.

I must confess I haven’t been able to come up with many good reasons for London not to do it.

The main worry would be defence. The rest of the United Kingdom would experience a massive economic dislocation, losing their most lucrative industries and the goose who lays golden eggs.

Would the wreckers allow their meal ticket to simply walk away? I have my doubts.