The summer in London this year was truly magnificent.

The sun shone. It didn’t rain. It was t-shirt weather from June through September.

I have lived in London for 20 years, and had never previously experienced a “Great British Summer”.

Until this year I firmly believed these were figments of the English imagination, stuff of myth and legend much like Camelot and Welsh dragons.

In late July I was riding a #182 bus towards Wembley Arena. For once my kids would have been correct had they accused me of being hopelessly lost (I call it “exploring”!).

A tall, sweaty guy with ginger dreadlocks and a guitar collapsed into the seat next to me. I was a tad underwhelmed that anyone would sit next to me, as normally my “don’t f*ck with me” face is deterrent enough to guarantee me a seat all to myself.

The unwritten law of London public transport is you do not talk to people. You don’t even make eye contact!

This guy didn’t appear to abide by those societal norms. Which was weird, and a little bit refreshing… but mostly weird!

My seatmate breathlessly informed me that it was “International Busking Day”. A whole host of assorted musical talent were descending on Wembley Arena for a concert organised by the Mayor of London.

I conceded that this guy wasn’t going to go away. It also occurred to me that I had got on the wrong bus!

The good news was I knew how to get home from Wembley, having run the North London half-marathon the year before.

The bad news was I would have to engage in conversation with a random stranger sporting marijuana-scented dreadlocks and carrying a guitar.

I asked the guy about the busking scene in London.

This wasn’t something I pay a whole lot of attention to, but the impression formed during my meanderings around town was there appeared to be less buskers now than a few years ago. The hot spots like Southbank, Convent Garden and South Kensington still usually had loads of performers; but elsewhere they seemed thin on the ground.

The guy agreed. He cited the move towards a cashless society as the main cause.

ApplePay, contactless payments, queue skipping coffee apps through to “Click ‘n Collect” made to order salads, and so on. Nobody carried loose change any more.

That caught my attention.

Pop quiz: how much cash are you carrying?

Let’s conduct an experiment. How much cash do you have on you right now? How much of that cash is in loose change?

I’m willing to bet the answer today is very different to what it would have been 5 years ago.

Not so long ago, all the random pedestrians walking past a busker had a pocket/wallet/purse full of loose change. 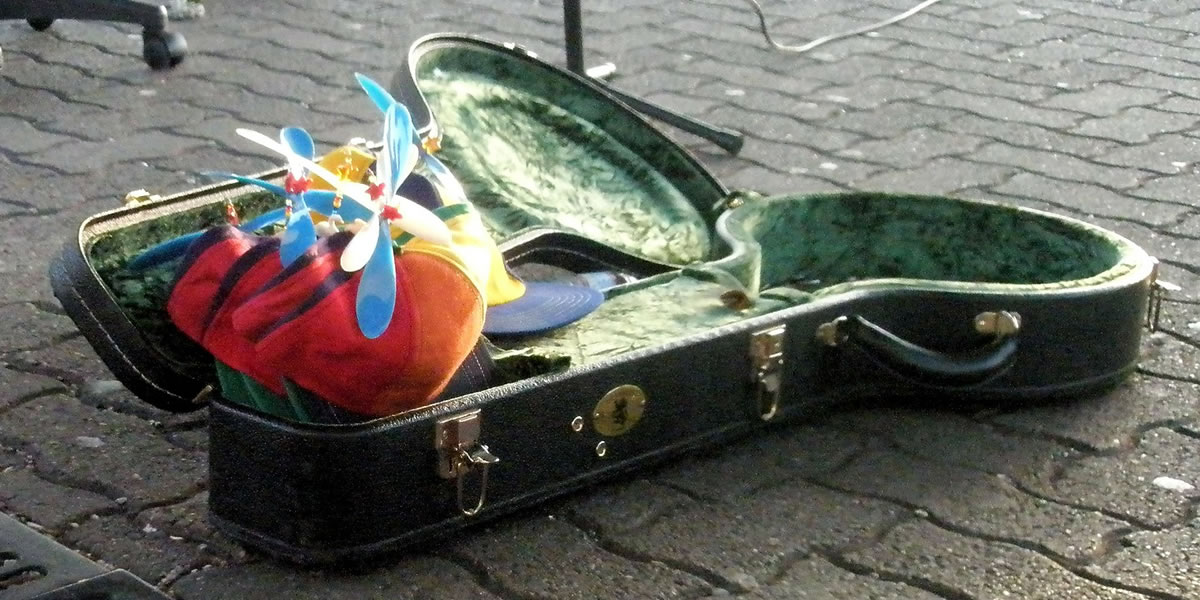 If the street performer was entertaining, or talented, or charismatic, or sufficiently reeking of desperation then many of us would drop them a coin or two on our way past.

Ed Sheeran and Rod Stewart both made their starts as buskers in London. 10 years ago Tom Jones proved busking could still pay his the rent should the need arise.

However there are certainly fewer cash transactions these days, and it has been years since I regularly had any change in my pockets.

Quickly dropping a couple of coins without breaking stride is below my discretionary spend and effort thresholds. A banknote, that I would have to rummage through my wallet to find, exceeds both.

Which sucks for the buskers, because if we no longer have the coins to drop into their guitar case, then the value of their time drops markedly.

Some performers would still do their thing in the hope of being discovered. Others may enjoy performing in front of a live audience. For many though, a cashless society means busking just isn’t worth their while.

In theory, a busker could pass around a contactless scanner rather than a hat. But would anybody actually be willing to pay? I have my doubts.

Charities too have had to adapt their approach. The days of being harassed by a small army of bucket wielding chuggers outside tube stations has mostly past. No longer do chuggers shakedown commuters for loose change. Now they want their victims to sign up to direct debit donations or premium rate text messages.

If buskers, who provide a service in anticipation of some financial goodwill, are struggling in a  cashless society then how are beggars faring?

Begging in a cashless society

Homelessness and begging are two different things, both of which are challenging and heavily politicised issues.

In England the Vagrancy Act of 1824 made it illegal to be homeless, and illegal to beg. Of course that law does little to solve the underlying problems that led somebody to become homeless, of which there are an estimated ~4,750 in England alone!

Those folks who sit outside your local supermarket or tube station asking you to “spare some change” are subject to £1,000 fines, or worse, should the police decide to prosecute them.

Don’t give money to beggars

The standard advice to the public from police and charities, who are orientated towards helping the homeless, is to not to give cash to beggars.

The Lambeth police recently got into hot water for posting a sign at Waterloo station instructing commuters not to donate to beggars:

Our research has shown that some of our most prolific beggars are not homeless and have accommodation. Some have a history of drug use which is funded, in part, by begging.

They don’t mean the migratory group who congregate beneath Marble Arch at the start of each summer, and panhandle in the West End and the City.

The urban legend the press is peddling refers to the iPhone using, BMW driving, actors who get into character and costume before hustling the unsuspecting public out of more money than the average London salary earner makes in a year!

I decided to dig into the data to see if the move towards a cashless society was having an adverse impact on the homeless.

The first place I looked was the police crime incidents statistics.

If cashless transactions had reduced the value of time spent begging, then I would expect the beggars to seek cash from alternative sources of income. Therefore there should have been an increase in thefts, burglaries and muggings. A person has got to eat after all! 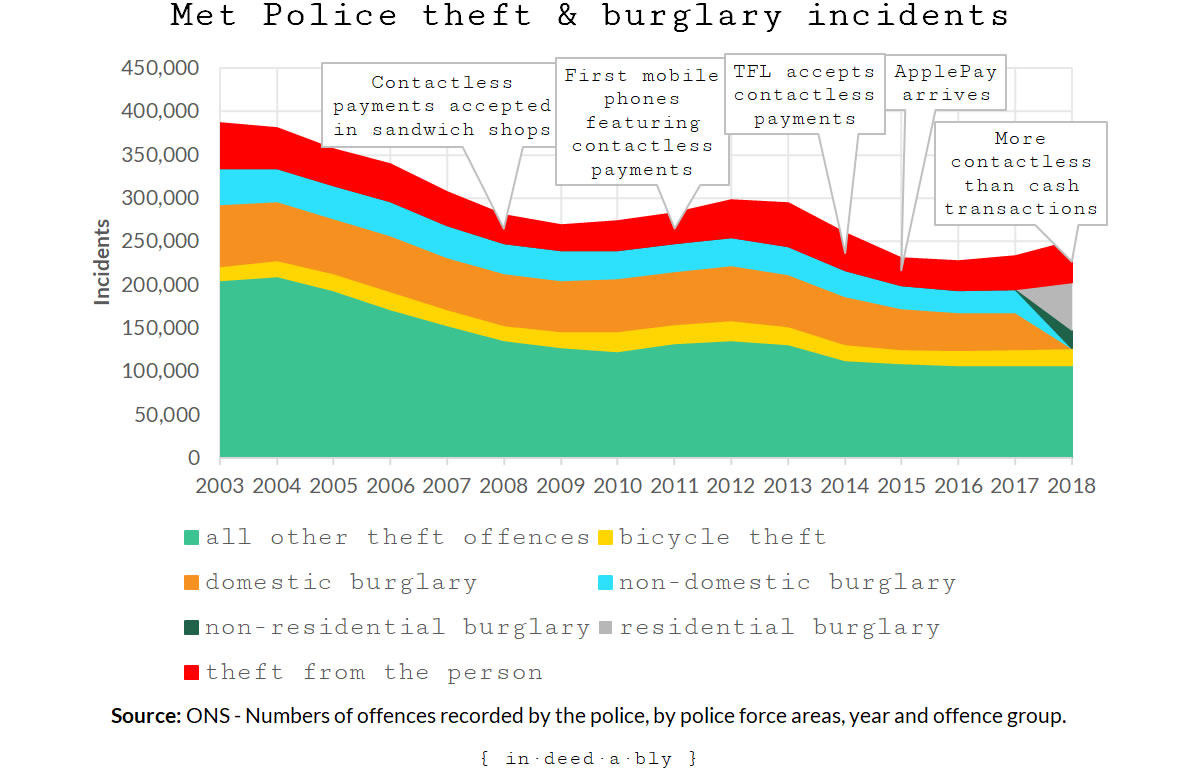 The Metropolitan Police data reveals the opposite. There has been a steady decline in all these classes of criminal activity since the introduction of cashless payments.

I briefly wondered whether there had been some sort of concerted effort to get beggars off the streets.  Given the austerity-driven budgetary environment that all public services have endured since the Global Financial Crisis, I thought it unlikely. Incarcerating people is an expensive undertaking!

Could the fact that ever fewer cash transactions have reduced the incentive to break into cars or mug drunken city workers as they stagger home from Thursday night drinks? Maybe, but I’m not convinced. There is still a ready market for slightly used smartphones and car stereos.

Next I looked at homelessness statistics. Perhaps there were just fewer homeless people in London? 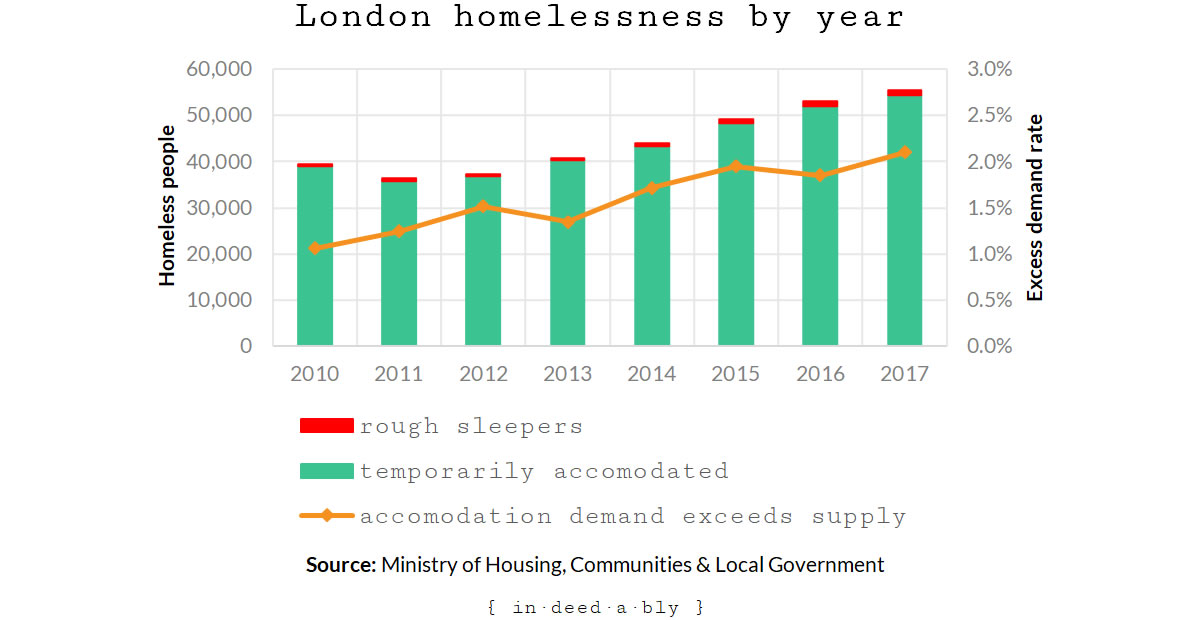 It turns out the total numbers of homeless people seeking temporary accommodation has increased markedly during the period corresponding with the introduction of cashless transactions. Demand for beds increasingly exceeds supply, resulting in an ever larger number of rough sleepers.

So in an environment where there were ever fewer cash transactions, the number of homeless people and rough sleepers both increased, while the number of burglaries and thefts decreased.

That outcome surprised me. Perhaps it really is true that many homeless don’t beg, and many beggars aren’t homeless?

A fit for purpose welfare system?

For what it is worth, the official government line is that England has:

The official data seems to support that position, with the majority of homeless people seeking temporary accommodation able to obtain it.

While I’m yet to see a beggar drive to work in a BMW, the sight of a beggar talking on a smartphone is a common enough sight. I’d always assumed they were stolen, but perhaps not.

The conclusion I reached was that cashless transactions does not appear to have disrupted begging in the same way that it has impacted busking. Also, the overlap between beggars and homeless people appears to be much smaller than I had expected.

There is wisdom behind the official guidance to not donate cash to beggars, because the money will get spent on drugs or alcohol.

That said, having known a few musicians in my time, I suspect more than a little of proceeds from busking meets the same fate!