Archery on a motorbike

I could feel, as well as hear, an approaching sound of rolling thunder echoing through the industrial estate in Refshaleøen.

A seldom used lizard brain survival instinct caused me to dive behind the idling taxi, the change and receipt from my fare scattering to the floor.

Missing me by inches, a huge Harley Davidson Fat Boy rumbled by. The bike was ridden by a grinning Viking of fridge like proportions, behind whom a lithely built Valkyrie precariously balanced while aiming a bow and arrow.

The arrow loosed, streaking down the laneway until it struck centre mass of a bullseye with a vibrating thud. Two similar arrows already occupied the small yellow circle.

I stood and dusted my suit off as the Harley shuddered to a stop. A crowd of cameramen, producers and various hangers-on clapped and cheered. The Valkyrie acknowledged them with a small bow and a big grin.

The Viking ran over and knocked the wind out of me with an enormous bear hug. His name was Lars, and he was the telecoms network engineer I had come to Copenhagen to visit.

The Valkyrie was introduced as Camilla, who gave me a quick peck on the cheek and apologised if they scared me. Years later she would go on to become the number one ranked archer in the world, watching her shoot from the back of a fast moving motorbike I could see why.

Lars explained that they were filming a television commercial for some trendy clothing line I had never heard of. His sister-in-law had apparently persuaded him to temporarily swap his trademark jeans and t-shirt for a Viking costume and fake beard, so that he could pilot his Harley for Camilla’s archery sequence.

That night I went to Lars’ house for dinner, where he served up a delicious homemade spaghetti bolognese, made with fresh tomatoes he had grown in his own garden in Copenhagen.

He was so excited by this!

It had been the first time ever that the summer had been both warm enough and long enough for him to successfully grow a crop of tomatoes through to harvest. He joked that while global warming meant folks would need swimming lessons if they wanted to keep living in Miami or Shanghai, but it was great for those living in Denmark. 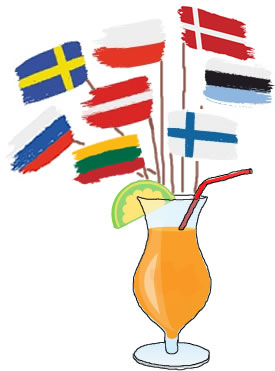 We discussed how several mutual friends in Stockholm were seeking to purchase waterfront properties in southern Sweden, northern Germany, or along the coast in the Baltic states.

The long-term play was that as global temperatures rose, it would soon become too hot to summer in the traditional Mediterranean destinations like Croatia, Greece, Italy and Spain. Instead holidaying Europeans would head northwards to the beaches and resorts lining the Baltic sea, just as the aristocracy once did at the turn of the previous century.

Today, nearly 20 years after I feasted on Lars’ first ever crop of Danish tomatoes, I was reminded of that day when I narrowly avoided being run over by an errant moped in Nice. I write this from an apartment balcony, having retreated to sooth my wounded pride with a cold beer and a beautiful view of the sun setting over the Mediterranean.

I reflected on our discussion about global warming.

The news headlines seem to be full of news about wildfires. The fire season seems to get longer with each passing year. At the time of writing fires were blazing in places ranging from Greece, to Sweden, to a midwinter bushfire outside Sydney.

According to Swiss Re’s sigma explorer world catastrophe insurance data, the total number of hectares burned by wildfire in 2017 was 53x the annual average, costing insurers over USD$14bn.

The widespread wildfires suggest the hot dry conditions they thrive upon are more prevalent than they have been in years past.

Record high temperatures frequently grab the headlines on the news. The more interesting information can be found by looking at the number of extremely hot days experienced by a locale.

For example Sydney experienced more than 65 days where temperatures exceeded 35 degrees Celsius in 2017, 15 of those exceeded 40 degrees! 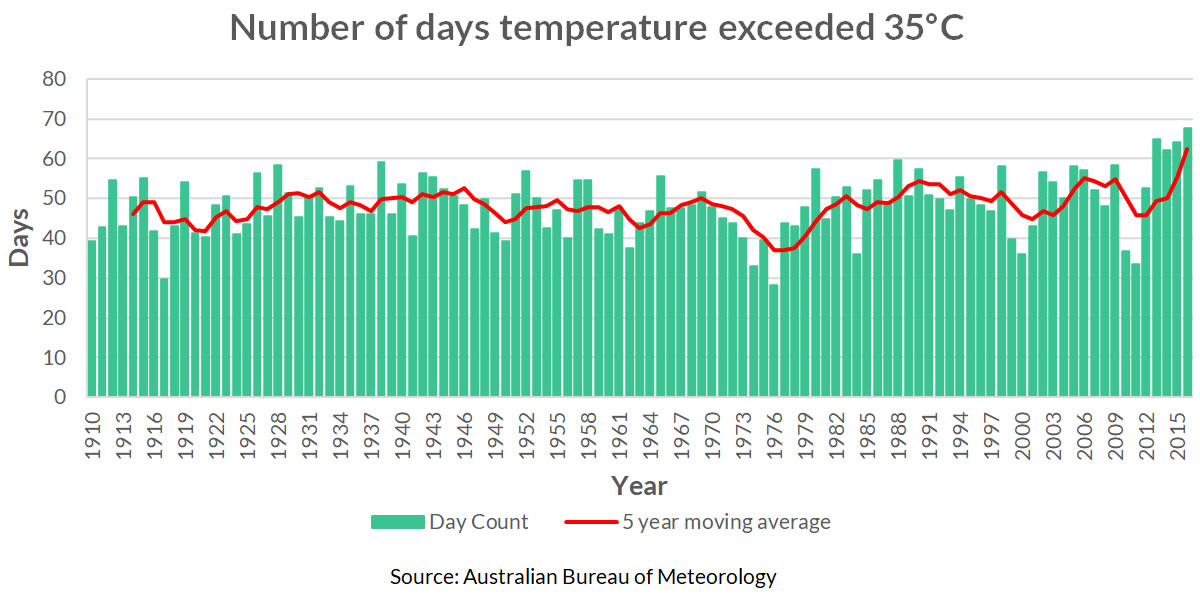 That is pretty uncomfortable by most definitions, but the economic impacts are higher. As the temperature soars, so too does the load on the electricity grid caused by all the air conditioners being used. In locales that suffer from underinvestment in infrastructure or poor capacity planning the end result is power brownouts.

The high temperatures are also pretty tough on agricultural crops.

A single observation may be interesting, but cannot tell the whole story. The two maps below were produced by the Climate Impact Lab to illustrate the average number of extremely hot days experienced around the globe in the recent past, and in the not too distant future.

A year 6 guide to the water cycle

I recently helped my son research the water cycle for a year 6 science project. During that exercise we learned that rain is caused by water vapour, created by evaporation from the world’s oceans, lakes and rivers.

The higher the temperature, the greater the rate of evaporation.

Warmer air can hold greater volumes of moisture (i.e. humidity) than colder air, something anyone who has ever suffered the misfortune of wearing a business suit outside in Hong Kong can attest to!

Gentle misty drizzly rainfall, for which Ireland and England are famous, gives the ground a fighting chance to absorb the rain. Conversely intense storms, like the regular afternoon downpours experienced in Singapore, quickly overwhelm the ground’s ability to absorb rain, causing flooding. 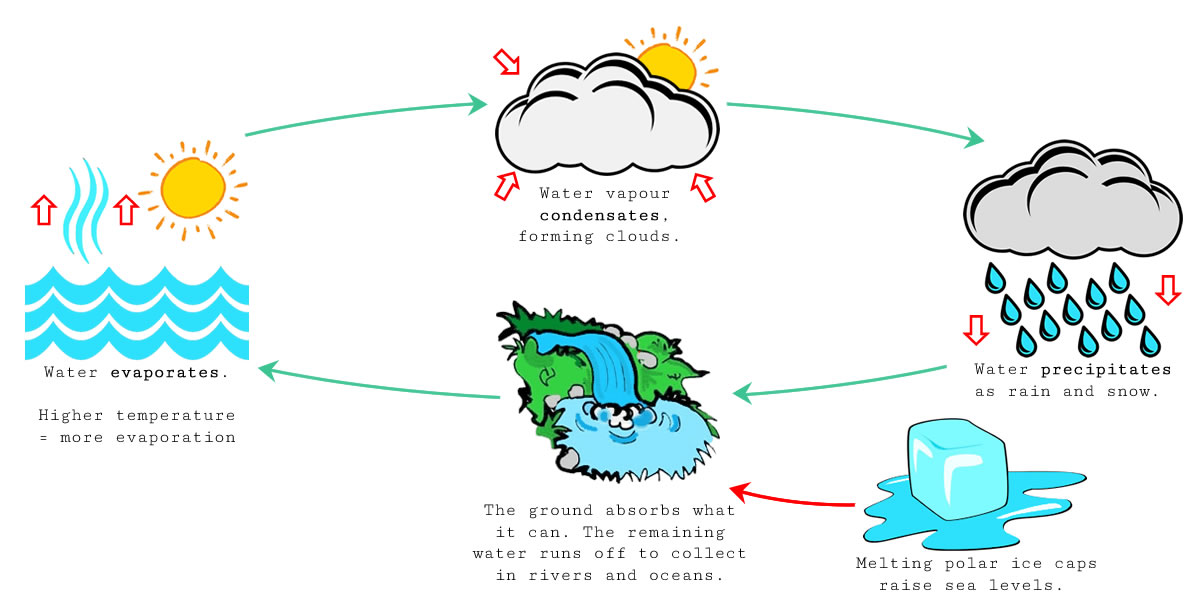 Explain the water cycle to a five year old.

The cities of Miami and Shanghai that Lars had commented on are turning to ever more inventive engineering solutions in a bid to battle the constant risk of flooding. Insurers suffered large hurricane losses in North America, while huge numbers of (largely uninsured) folks were adversely impacted by the estimated USD$6bn of losses caused by floods across Asia.

In the United Kingdom the not-for-profit reinsurer Flood Re was been established to ensure affordable flood insurance continued to be made available to the hundreds of thousands of houses foolishly built on flood plains throughout the country. Without this government-backed arrangement, no prudent commercial insurer would provide affordable insurance on a near-certain peril!

While many of our most heavily “sponsored” politicians deny the existence of climate change, even some of the world’s most staid institutions are starting to recognise the globe is getting hotter. 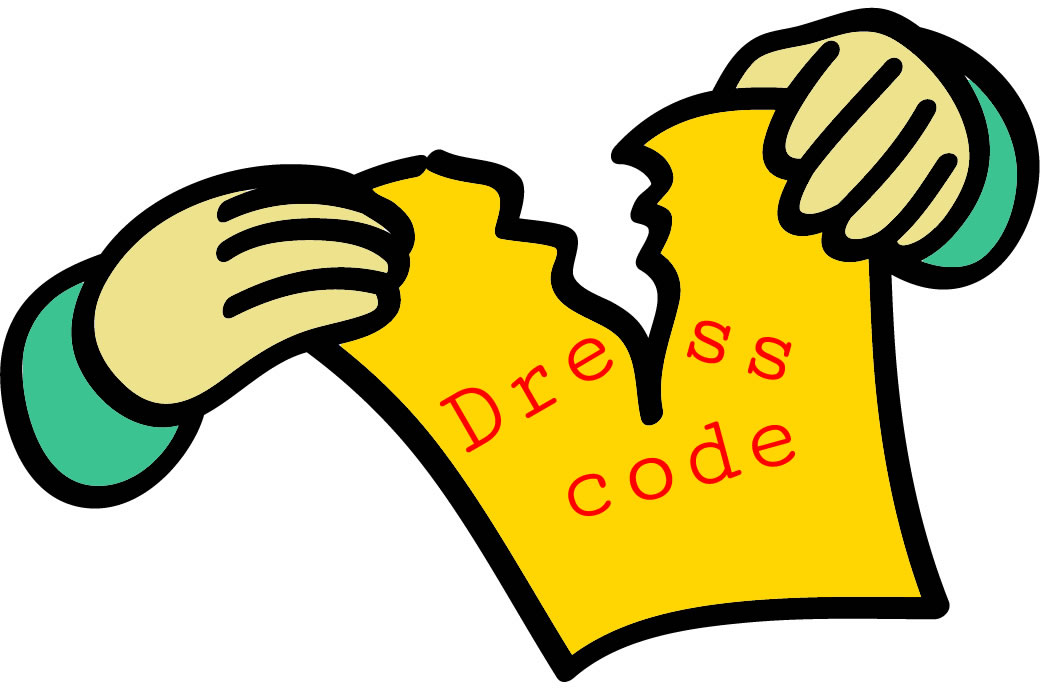 After 330 years of stuffy pretentiousness, Lloyd’s of London finally rescinded their requirement for gentlemen to wear ties in the Underwriting Room.

This week due to extreme weather, the MCC allowed member’s to access to the famous Pavilion at the Lord’s cricket ground without wearing a jacket!

Yesterday my lady wife was complaining the temperature on London’s Central Line tube reached 48 degrees during her evening commute. Somewhat sympathetic though I was, I must admit to feeling pretty good about being on holiday with my kids on the French Riveria!

Apparently I lacked sufficient sincerity, as I received orders to visit the local Sephora in search of an appropriately sized care package to help ease her woes.

Calling the timing of structural changes is hard

In the mid-2000s Lars and his wife migrated to Australia in search of warm weather.

Within 4 years they had returned home to Denmark, apparently finding the southern hemisphere climate a bit too warm for their tastes! Fortunately they didn’t sell their Copenhagen house, which doubled in value while they were away.

The recent 7.8% fall in the Swedish housing market due to oversupply, combined with mortgage interest rates that remain below 2%, has me wondering once more about Lars’ prediction of climate-driven structural changes to global holiday market and desirable living locations.

I think he may be onto something, it may be worth investing in waterfront property in less traditional beach holiday markets like southern Sweden, northern Germany, the Baltic states… or New Zealand.

The question is one of time scales. Getting that right is harder than performing archery on a motorbike!