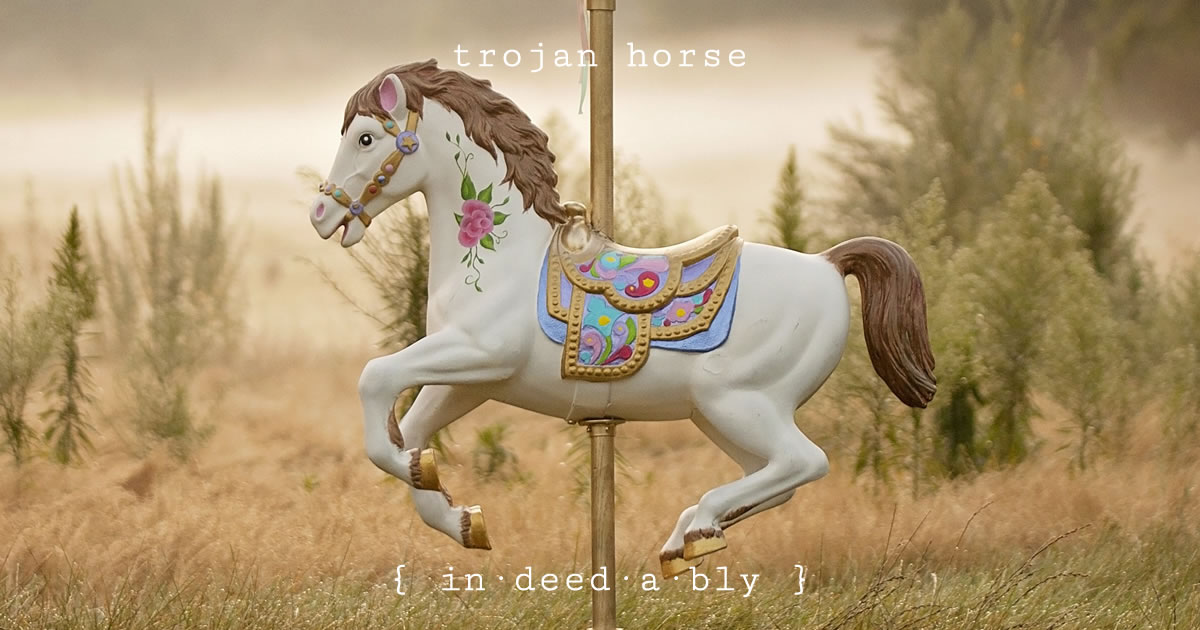 I half-listened as my younger son downloaded about his day.

High drama about a colouring pen thief. The usual suspects cheating at football. Another of his friends departing the school following the recent OFSTED inspection debacle.

The latter showcasing a flawed funding allocation system that rewards success and punishes failure. An adverse inspection report creates a self-perpetuating feedback loop of cost-cutting and compromise. Good teachers and parents of means cut their losses and abandon ship, while those who remain rearrange the deck chairs on the doomed vessel as it inexorably founders.

Local property owners and estate agents despaired. The school had been the primary drawcard of the neighbourhood, magnetically attracting buyers seeking an “outstanding” education for their offspring. At the stroke of an OFSTED inspector’s pen, that perceived desirability vanished, causing property prices to plummet.

The boy randomly asked questions about the Trojan Horse, which his class had apparently started learning about that day. Casting my mind back to antiquity, I did my best to make something up and sound convincing.

From what I could remember from my own high school history lessons, roughly 3,000 years ago the wife of a Greek king had run off with a bloke from the city of Troy. The king was a tad underwhelmed by this turn of events and sent his army to conquer Troy and bring her back.

Unsurprisingly, the Trojans didn’t much fancy the idea of being conquered, so they closed the city gates and politely suggested that the Greeks return from whence they came.

A standoff ensued. It lasted for ten years.

At some point, the Greeks tired of lounging around in the Turkish sunshine.

They apologised for the misunderstanding, packed their bags, and sailed for home.

Before departing, the Greeks spent a few days constructing a giant wooden horse. They wheeled it up to the city gates and offered it as a tribute to the Trojans. A grandiose way of saying “Good game. You beat us fair and square. No hard feelings”.

Feeling pretty good about themselves, the Trojans dropped their guard and held the mother of all parties to celebrate the departure of an army’s worth of unwelcome house guests.

Later that evening, after the Trojans had passed out from too much partying, a gang of sneaky Greeks climbed out of the horse. They murdered the sleeping Trojans and burned down the city.

I couldn’t recall if this wooing technique was particularly effective at enticing back the runaway spouse. I suspect not.

As I recounted the tale, a few things triggered my bullshit detector.

First, how did the population of a city under siege for a decade not die from hunger or disease? This suggests the Greeks had failed to blockade the Trojan supply lines. That sounds like a half-assed effort by the occupying army. Perhaps they didn’t want their queen to return?

Second, the story has it that the Greeks constructed the Trojan horse in just three days. After a decade spent lounging around in the Turkish sunshine, how plausible is it that the Greek army contained the master craftsmen required to perform such a magnificent feat of carpentry? To construct something in the field that looked good enough to impress, rather than resembling a primary school child’s art project. Army engineering tends to be fast and functional, but rarely pretty.

Third, the horse must have been absolutely huge to successfully hide the thirty-ish heavily armed Greek soldiers who subsequently murdered their way through Troy. I find it implausible that in a city the size of Troy, there wasn’t at least one foolish teenager with more bravery than sense who climbed the horse to see how it was constructed and be the first to graffiti their initials upon it. Surely that would have rumbled the Greeks hiding in a hastily constructed statue?

Some say the wooden horse was really a wooden ship, based upon an old translation of Homer’s story “The Odyssey” which described a boat as a “sea-horse”.

Others believe the “horse” was really a battering ram covered with soaked horse hides to prevent attackers from becoming human pin cushions while they bashed down the doors of their reluctant hosts.

Archaeological digs have unearthed evidence suggesting that the city of Troy had been destroyed and rebuilt numerous times over the centuries. Sometimes by earthquakes. Sometimes by fire. Sometimes, possibly, by invaders.

Irrespective of whether there is any truth to the legend, the concept the story teaches us about opportunistically achieving one outcome under the guise of doing something else is a very useful lesson to learn.

The Trojan Horse approach could be something blunt, yet life-changing.

The spouse who settles the disagreement with their partner about having a child by sabotaging birth control efforts. A holed condom. Skipping the pill. Happy endings quite literally serving as a Trojan Horse. Dishonest. Underhanded. Quite possibly responsible for more “accidents” than we care to admit.

Other times it could be putting a positive spin on a vice or indulgence. Rounding up purchases to the nearest round number and saving the “change”. Perhaps feeding an expensive shoe habit, then investing the purchasing price as a salve to a guilty conscience.

That “free money” from employer pension matches are a form of Trojan Horse. Finagling an additional compounding reward to the employee for the time they were going to sell off anyway.

According to its latest quarterly filings, Facebook generates 98.4% of its revenues from the sale of targeted advertising to the likes of marketing firms and political campaigns. How does it gather the data required to perform that targeting? By offering a “free” social media products to customers, then harvesting and selling their contact, content, location and usage data.

At many of my client sites, I’ve had to use tactical projects as Trojan Horses. Taxing each to implement small elements of the larger vision. Once combined, those pieces collectively delivered a strategic capability or accomplished a seemingly “big hairy goal” that the client desired but had been unwilling to directly fund via a dedicated vehicle.

Once you start to look for them, you will discover that we are surrounded by Trojan Horses. Products or services that are not what they seem. Offerings where the immediate outcome differs markedly from the ultimate end game.

All of these examples outwardly offer one thing, yet beneath the surface are often designed to achieve something else entirely.

The article led with the eye-catching quote:

The article went on to describe how once upon a time actresses could earn decent money starring in studio-produced films. Then the internet arrived, providing limitless fierce competition and eroding profit margins.

Today actresses use adult films to establish a following and build a personal brand. The goal is no longer to make money from the movies themselves, but rather to subsequently monetise their popularity by selling into their fanbase.

Selling their attention via chat rooms.

Monetising their fan base by marketing collectables and custom products.

The performers seek to establish a diverse range of cash flow channels while their popularity lasts. They are fully aware that there will inevitably come a day when a younger, fitter, prettier, cheaper, or more extreme competitor steals their market share.

Is this establishing fame to market goods and services a modern development? Or is it as old as the story of the Trojan Horse? Was PT Barnum right about there being no such thing as bad publicity?

Kylie Jenner was famous for being a reality television star. She became a self-made billionaire at 21 years of age, successfully turning fame and connections into an impressive business empire.

Jay-Z is another self made billionaire. As a young rapper, he quickly realised that the money in the music business comes from owning the record label, rather than being a performer. Translating his fame into fashion lines, high-end liquor brands, and assorted other business interests.

There is a clearly discernible pattern at play here. Becoming one thing in order to enable something else. A Trojan Horse play.

Gain exposure and establish a reputation.

Evolve that reputation into a brand.

Then turned that brand into one or more successful businesses.

Of course, not all opportunities for exposure are created equal.

The freelance writing, keynote speaking, and blogging worlds are plagued by the dubious merits of “exposure”. Self-serving publications or promotors often offer the talent an opportunity to address their audience and gain exposure to a potentially larger platform. Such work is typically unpaid, providing benefit to the publication but questionable value to the guest.

Sometimes the arrangement is mutually beneficial. Giving the guest an opportunity to “talk their book” or shill whatever product they happen to be promoting at the time. Interviews or guest posts that are thinly veiled advertorials. Seldom enlightening. Often repetitive.

Occasionally, the exposure gain pays off.

An interview that results in a job offer or publishing deal.

The spin-off series following the adventures of a bit player from the original television show.

Being introduced to somebody with a compelling business opportunity or property deal.

Just like those Greek soldiers hiding inside the Trojan Horse, “you have to be in it to win it”. They performed an undesirable job, then reaped great rewards for their efforts.

Play, and you may win. Stay on the sidelines, and you definitely won’t win.

There are no guarantees. Only probabilities. Calculated risks. Educated guesses.

Reputations that are hard won, but easily lost.