“That guy” strutted past our beach towels on the sand.

He bore an uncanny resemblance to a walrus. A once-powerful physique running to fat, thick shoulders and chest now competing for dominance with an impressively proportioned belly. The whole package shrink wrapped in wizened sun-bronzed skin and covered with thick dark body hair.

My lady wife arched an unimpressed eyebrow. “What is he thinking?”

“That guy” caught her expression and responded with a thousand-watt smile.

He looked preposterous and he knew it.

Wore it with the swagger of a man who simply did not care.

Transcendent beyond the everyday worries of mere mortals, with their constraining self-doubts, desperate desire to fit in, and crippling fear of the unknown.

We watched as he made his away along the beach, exchanging warm greetings with women young and old as he went. Confidence personified, from huge smile to cheeky builder’s cleavage peeking out of his tiny white Speedos.

Here was a man with certainty about his place in the world.

That evening we sat at an outdoor café, enjoying wood-fired pizzas and cold beer. Locals and tourists mingled in that relaxed and carefree way that only beachside holiday towns seem to achieve.

“That guy” was seated alone at the next table. After a while, we got to talking. He was an expat who had moved to the town a few years earlier. The last of his children had grown up and moved out. Days later, his wife had left him. An ambush of sorts. No further need to “stay together for the kids”. A move she had been planning for years, unbeknown to him.

Cleaned out in the subsequent divorce. Retirement plans throw into disarray.

Discovering that for the first time in nearly 30 years, there was no need to compromise or settle.

He had an epiphany: stop planning life and start living it.

Now he led a simple existence in a beautiful location where what was left of his money should sustain him for the rest of his days. Enjoying the warm weather. Nice food. Relaxed company.

Just blissful idleness, broken up by projects and volunteering at the local food bank whenever the motivation struck. He had even taken up some new hobbies, slowly mastering the dying art of stained glass window making.

Over the years I have often thought back to “that guy”, and not just because the sight of those tiny swimming trunks still haunts me. No, it was his inspiring adaptability. Proof that our plans will change markedly throughout our lives, yet we survive and succeed regardless.

Last time I wrote that decumulation planning was a behavioural exercise rather than a financial one. Uncertainty and future change would regularly require us to adapt and refine our plans. Based on the feedback I received, my conclusions in that story made some readers very uncomfortable!

Today I thought I would illustrate my conclusion by using how my past selves had pictured their future, and evaluate how their imaginings would have worked out in reality.

Long ago and far away, I was an 18-year-old kid. Like many people at that age, I had big dreams and no clue. Still believing anything was possible for those who showed up and put in the work. Just beginning to learn that reality is very different.

I was about to buy my first car. Commence university. Invest in the stock market. Exciting times!

Looking to the future, I was certain about a great many things.

I would never get married. Never have children. Never turn into my parents.

I was going to escape my home town. Travel the world. Live and work overseas as an Accountant.

I would become a millionaire by the time I was 30 years old.

With the earnestness and ignorance of youth, I was never going to sell out. Give in. Compromise.

Armed with these personal values and roughly $10,000, I would show the world what I could do.

While the millionaire idea had initially been a childish response to being told I couldn’t do something, there was also some logic behind it.

Four percent of $1,000,000 was $40,000, considerably more than the ~$21,000 average income that single-person households earned at the time. Average income seemed like a reasonable proxy for living costs.

The “income” stream should provide a sustainable cashflow. A decumulation plan of sorts. As I had no desire to live in the middle of a busy big city, that “income” should be sufficient to provide a comfortable standard of living for the rest of my days.

I could live by the beach. Get a dog. Write a novel. Live happily ever after.

The only problem I foresaw was that growing $10,000 into $1,000,000 in just 12 years would require achieving compounding returns of nearly 40% per year! In reality, much of that capital would need to be earned and saved rather than grown. Particularly in the early stages.

Ten years later, I was married. Living in the middle of a busy big city, on the other side of the world.

I was running a consultancy business, and occasionally helping out as an extra Programmer when deadlines demanded it.

Far less certain about most things, but still sure I wouldn’t have children.

Any illusions that the world was a meritocracy had long since been dispelled.

I had been wrong about not selling out. Needing to pay the rent will do that to a person’s ideals.

My “millionaire by thirty” goal was one of the few parts of my 18-year-old self’s plans that had survived contact with the realities of being an adult and the compromises of living with a significant other.

However, some logic errors in my initial assumptions had been brutally exposed.

I had forgotten that average wages would increase over time. A schoolboy error, obvious in hindsight.

A million just didn’t buy what it used to!

It would no longer be anywhere close to “enough”, even for the uncomplicated solo existence envisaged by my younger self.

Now I was trapped on a hedonic treadmill. No matter how much I earned, it never seemed enough.

28-year-old me was bored. Frustrated. Restless. The compounding result of decisions made and avoided. I neared completion of a Financial Planning qualification, intending another career change.

On a whim some months earlier, I had entered the “green card lottery”. A life-changing diversity programme that awards United States permanent residency to the winners and their families.

For the first time in a long time, I was excited about something.

Looking forward to casting off the self-imposed shackles of routine and unsustainable living costs.

Seizing the opportunity to hit reset and make a fresh start.

My revised plan was to take up the green card, work in Boston until I had sufficient net worth to have conquered the financial imperative, then move to a beachside destination. Maybe Hawaii!

Another decade passed. I was still married, and back living in the middle of that same busy big city.

38-year-old me had learned that “life happens”, and nothing is certain.

I now had two kids and lived in a flat I owned mortgage-free.

I had been wrong about not having children. They proved to be the most rewarding of experiences.

Housing costs had only partially been replaced by nursery fees and nanny wages. For the first time in many years, there was a tangible positive difference between cash inflows and outflows.

Unfortunately, the flat was too small for my rapidly growing family, so the reprieve would be shortlived.

I still ran the consultancy, though changing fashions foretold the looming end of its lucrative specialist niche.

I had also been wrong about Financial Planning. After qualifying I was unable to get past the inherent conflict at the heart of the profession: what is good for the planner is rarely good for the client.

Attaining that millionaire goal was a distant memory. The first one now had a friend.

18-year-old me had made some naïvely simplistic assumptions with his plan. Projections based on smooth lines reflecting historical averages. The passage of time allowed those assumptions to be validated against lived experience.

I have extended the period covered by the remaining charts a little, to capture both the Global Financial Crisis and the first year of the COVID pandemic, which tells a more interesting story even though it spans beyond 38-year-old me’s observations. This doesn’t change the outcome.

The “income” line illustrates the 4% real return assumption, using the S&P500 Total Return as a representative investment. Average wages continued to track the original comparison measure of single-member household average earnings that 18-year-old me had sought to beat. So far, so good. 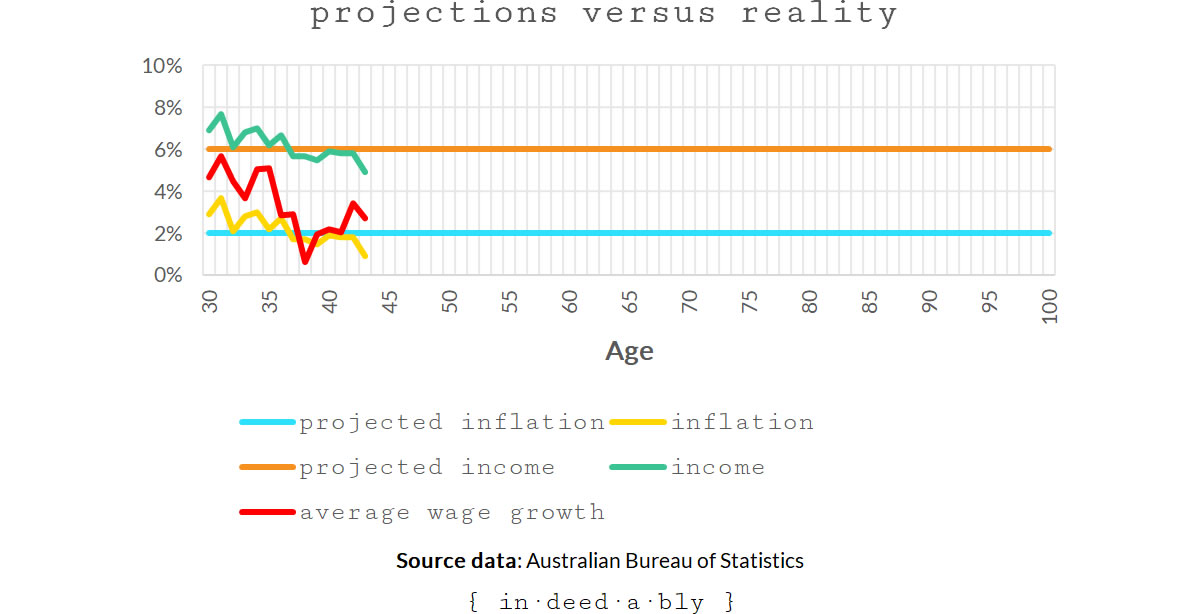 The next chart illustrates something else that 18-year-old me’s plan had not accounted for, invested capital values can go down. The impact of the GFC was swift and brutal. The decumulation plan’s annual drawdowns exacerbated the effect, a real-life sequence of returns risk case study.

It would take a record-breaking decade long bull market before my capital levels returned anywhere near 18-year-old me’s simplistic projection.

Where things get troubling is observing how 18-year-old me’s plan for derived “income” performed against average wages.

The low inflation environment of the last decade resulted in “income” falling to levels well below the average wage, where it has remained ever since. Given that average income had been selected as a proxy for cost of living, younger me would have experienced some very frugal years had he faithfully stuck with his decumulation plan. 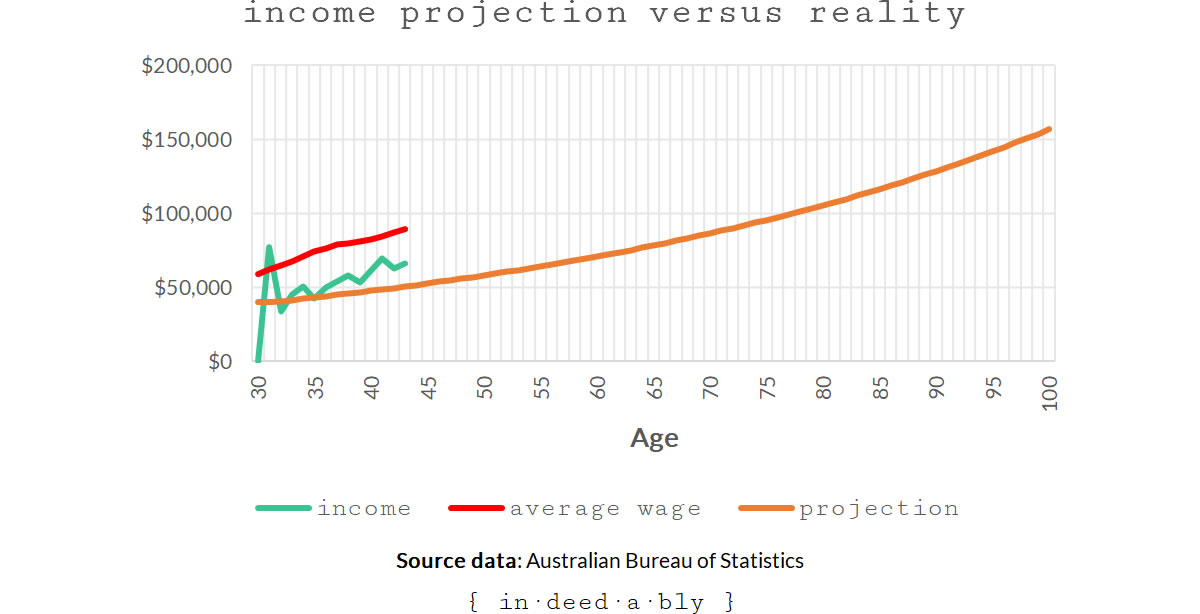 After a slight hiccough early on, “income” growth had outpaced the projection. Despite the lower than expected capital values throughout much of the decade, the plan had so far played out largely as 18-year-old me had imagined it would.

The interesting lesson from this exercise wasn’t how surprisingly well the decumulation plan, imagined by my naïve 18-year-old self, had faired during its first 10+ years. No doubt my overconfident younger self believed that outcome was a certainty!

In this, as in so many things, he would have been mistaken.

No, the interesting part is just how poorly suited that simple decumulation plan I cooked up 25+ years ago turned out to be at each of the subsequent life checkpoints in this story.

The major changes didn’t originate in a spreadsheet.

A Monte Carlo backtesting simulator could not have anticipated them.

They were the result of a lifetime’s conscious choices, and unpredictable “life happens” events, that combine to shape our lives.

18-year-old me wouldn’t recognise the man I am today. What the hell happened?

28-year-old me would be dismayed at where I find myself. Still doing the same job in the same busy big city, but now with kids?

38-year-old me would enviously look on, wondering where the real me had gone and who this imposter was in his place. How had he ever found the time, money, and confidence to semi-retire?

Our perspectives are framed by our experiences and priorities.

Each version of younger me would observe the same semi-retired father, husband, business owner, and migrant that I am today.

Each would perceive something entirely different.

Which raises a troubling question. After being so comically bad at predicting my own future, what makes me think the decumulation plans I put in place today for future me in 10, 20, and 30 years time will fair any better?

Or will things go full circle? Perhaps someday I become “that guy”. Fat, happy, and single by the beach somewhere.

Were that to happen, I would grudgingly have to admit that 18-year-old me was far more prescient than I give him credit for.

I wonder if they make those tiny white budgie smugglers in my size?