It would be fair to say the second quarter of 2020 was interesting.

Short-tailed tragedy for a few. Illness. Sometimes death. For them or their loved ones.

A snowball for now. Quietly gathering size and momentum as things go downhill. Soon to be an avalanche.

Many of us have long considered ourselves to be the Kings and Queens of our own castles. Leading a secure existence. A comfortable lifestyle carved out and enjoyed. Seldom wanting for much. Yet rarely satisfied.

A long-running bull market brings with it a sense of complacency. Inevitability. Invincibility.

Asset prices can only go up.

Mortgages can be easily refinanced at the end of a honeymoon period.

Everyone is a genius in a rising market.

The last few months demonstrated the fallacy of those beliefs. A tough life lesson to learn or relearn.

Mortgage refinance can be expensive or unobtainable.

Those companies we did business with, worked for, invested in, or owned now appearing all too mortal.

The 2020 rollercoaster ride has given the wiser amongst those Kings and Queens good reason to re-examine their castles with a critical eye. How deep is the moat? How solid the walls? How secure the defences?

Dividend, interest and rent statements have trickled into my inbox this month. Covering the months of April, May, and June 2020. A period when economies the world over went into hibernation. Then recession.

I viewed the statement’s arrival with equal parts cautious optimism and foreboding. How bad could it be?

The first one I opened was a FTSE All World index tracker. It would be fair to say that the numbers it contained were a tad underwhelming. Like a dividend, only smaller. 41% lower than the comparable period last year. 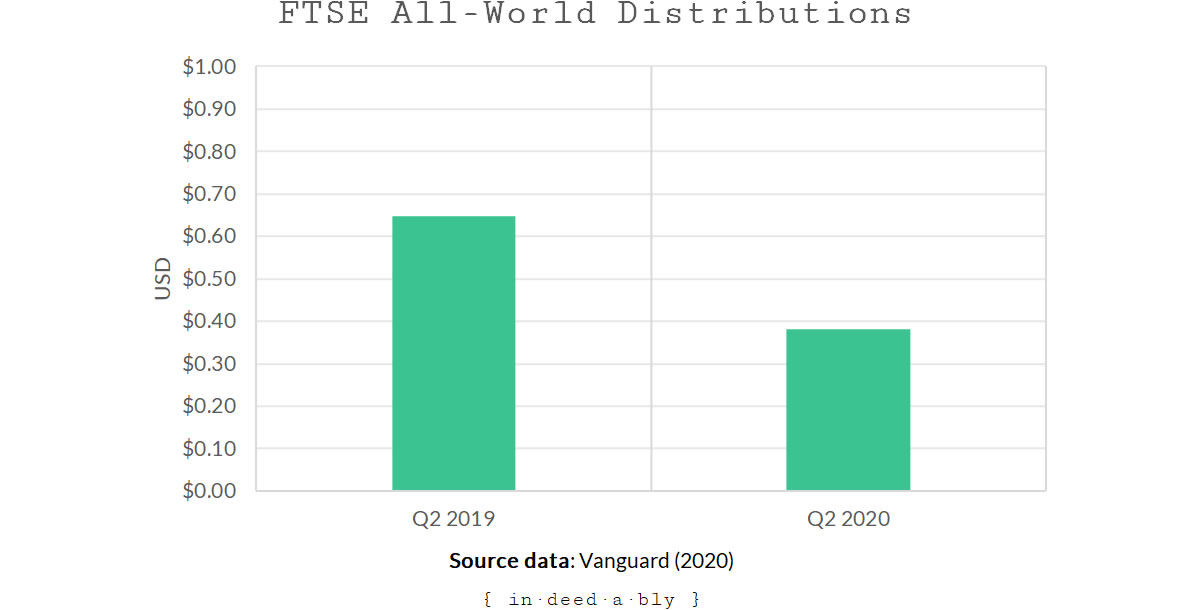 Delving into those numbers, it was interesting to see how different markets I invest in have weathered the pandemic induced economic storm. The chart below illustrates how distributions have been impacted across a range of market indices. 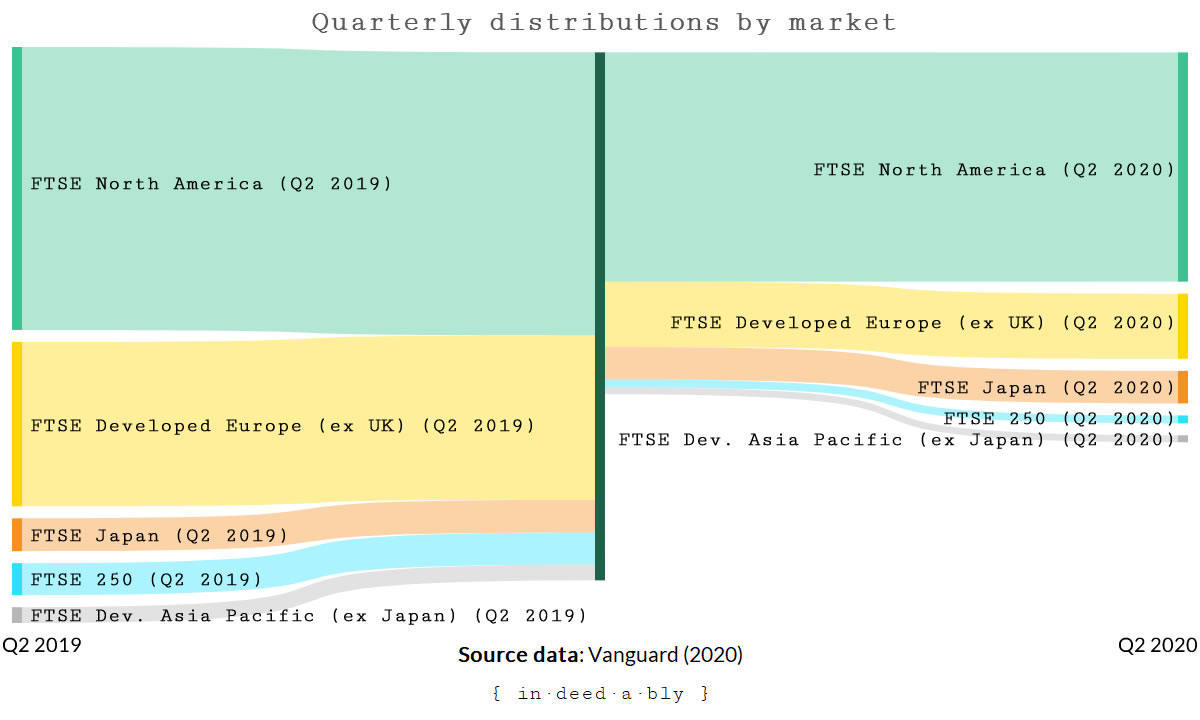 European companies felt the impact of the pandemic faster than the United States, as the European Union banned firms who had received bailouts from paying dividends or making share buybacks for as long as the state retains a significant ownership stake. Meanwhile, the United Kingdom has experienced an eye-watering proportional drop in dividends, keenly felt like a swift kick to the home market bias for many patriotic British investors.

The US markets accounted for over 66% of the global market capitalisation at the time of writing. That is a lot. Out of curiosity, I called up Robert Shiller’s historical dividend yield data for the S&P500 index to see how the current dip in distributions compared to events of the past.

Unfortunately, the Q2 2020 figures had not yet been added to the dataset. I plotted the available data going back to 1871, and observed a clearly defined trend. 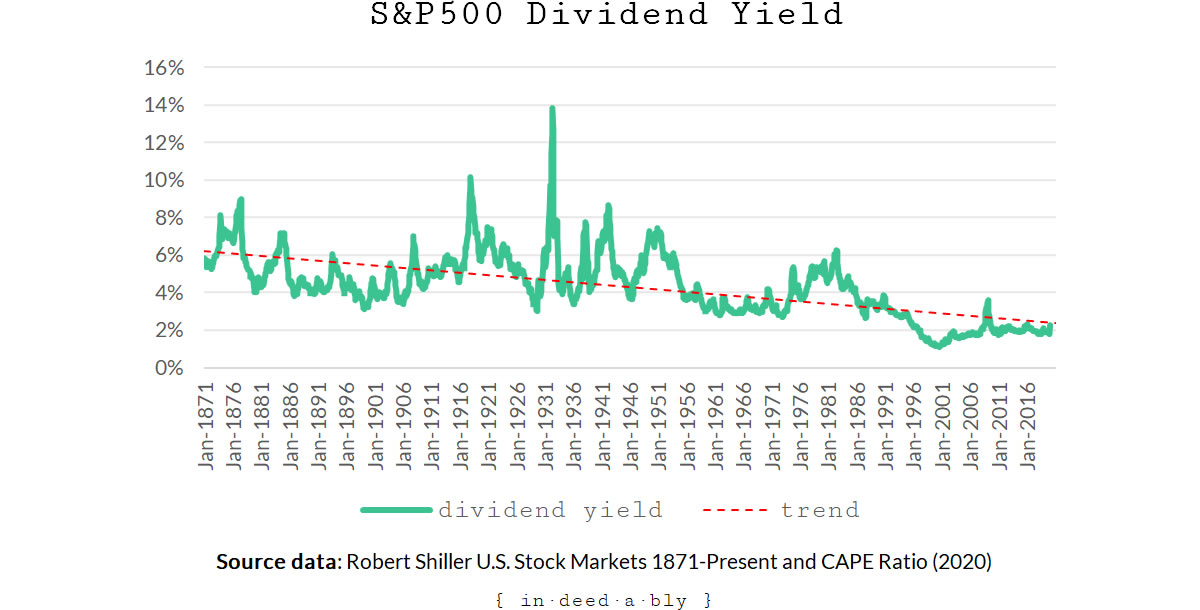 Over the 150 years of available market data, the S&P500 dividend yield has steadily declined from around 6% back then to today’s 1.5%. The size of the recent dip in yields might have been unusual, but the general direction of travel wasn’t.

Did that mean that listed companies have become valued at ever greater multiples to the profits they distribute? Or was there a simpler explanation?

Much has been written about the merits or evils of share buybacks. An alternative means for companies to return excess capital to shareholders, often involving a more favourable tax treatment.

I trawled the internet for historical S&P500 share buyback data. This seems to be a scarce commodity. My Google-fu struggled to find datasets going back more than a couple of market cycles, and all those I looked at contained some fairly significant caveats and health warnings. 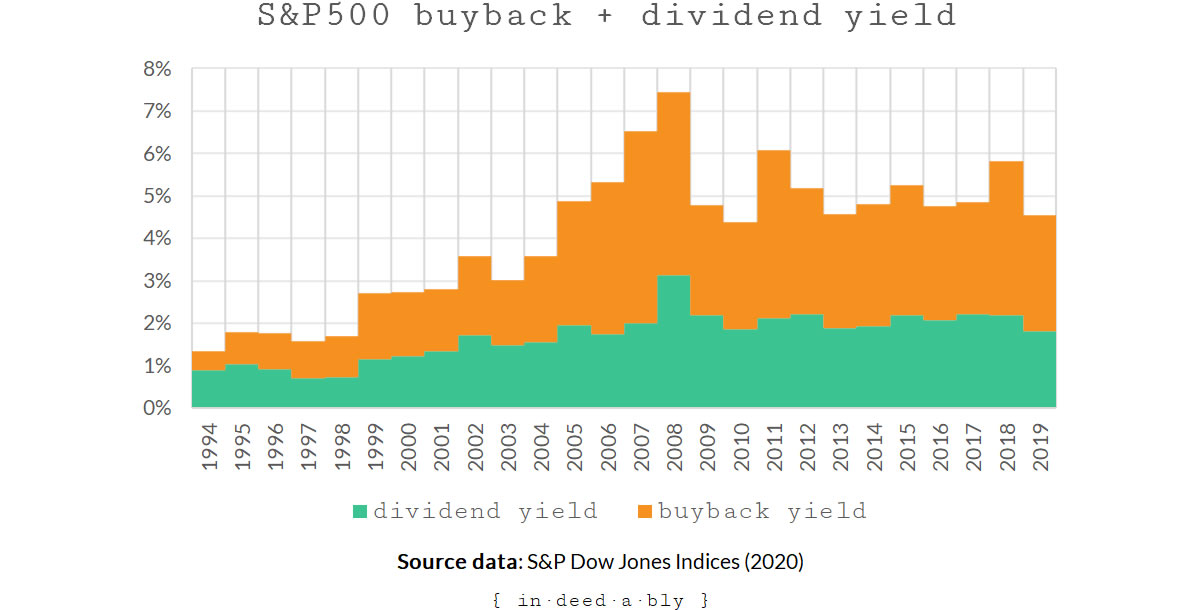 Since 1996, companies in the S&P500 appear to prefer buybacks over dividends. When the two methods are combined, the rate at which capital is returned to shareholders remains much closer to those halcyon days of natural yields in the 5-6% range.

Next, I switched my attention to my bond income.

Bonds are a reluctant feature of my investment portfolio, playing the role of matrimonial peacekeeping device. They perform their traditional function in portfolio construction, serving to smooth out the occasionally bumpy ride. The difference in my case is that the turbulence they insulate against has little to do with the stock market. 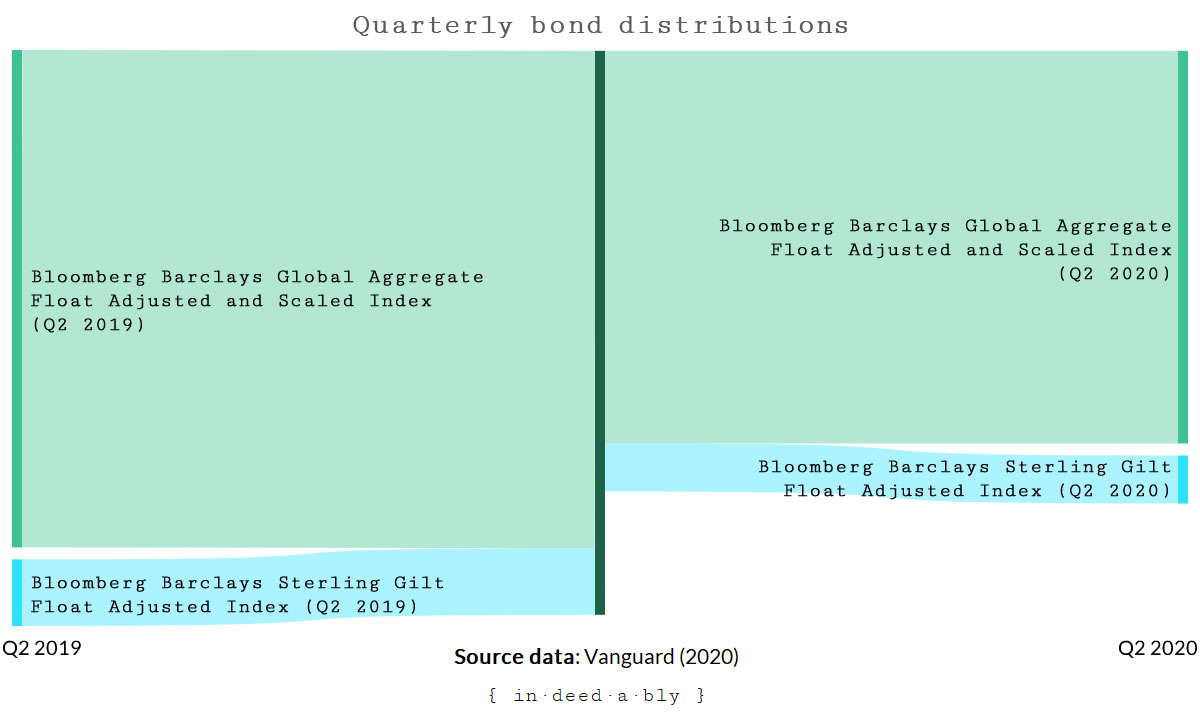 Once again, second quarter distributions were down compared to a year ago. Just over 20% lower for global bonds, unsurprising in a world of lower interest rates and widespread quantitative easing. That drop was closer to 30% for the United Kingdom flavour.

I wondered about Britain’s underperformance. First dividends, now bond interest. Could it be explained by movements in exchange rates? 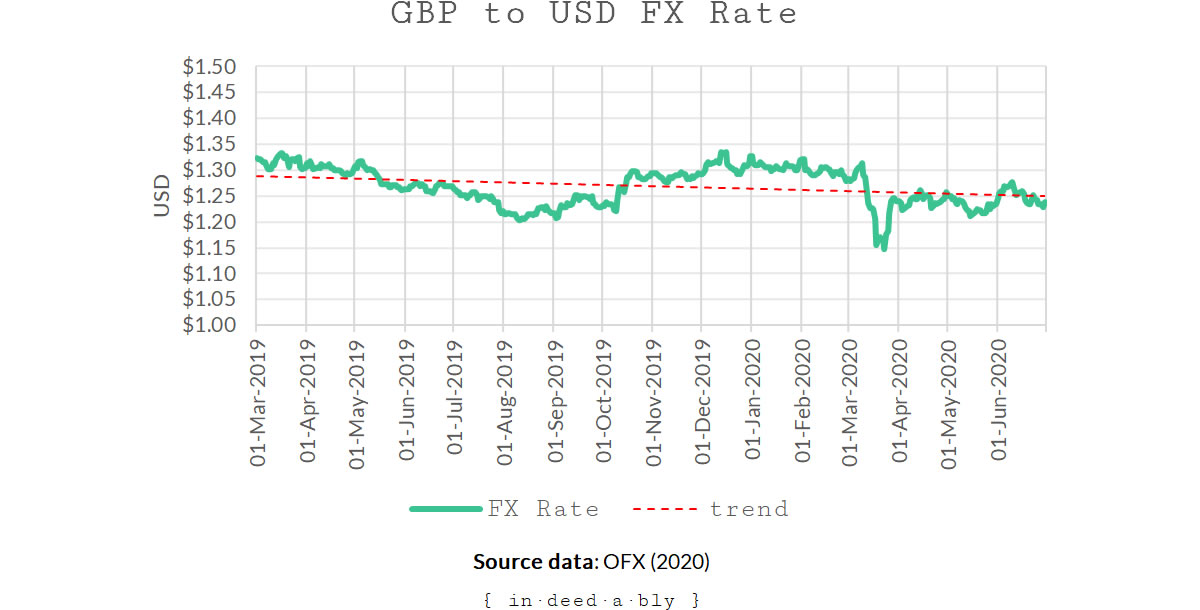 A quick chart of the FX rates throughout the period in question does reveal a weakening in the value of the Pound compared to the US Dollar.

However, that currency decline alone does not appear to fully account for the relative underperformance.

Finally, I looked at my rental statements. I already knew this was going to be a shit show, having had tenants lose their livelihoods and plead hardship during the lockdown. We reached an agreement about what they could afford to pay, and agreed to review the situation again in a few months time.

The extent of those losses were offset somewhat by the fact that the lease where I currently live came up for renewal during the lockdown period. Market forces had shifted the balance of power from landlord to tenant this time around, so we were able to negotiate a material discount in rent. 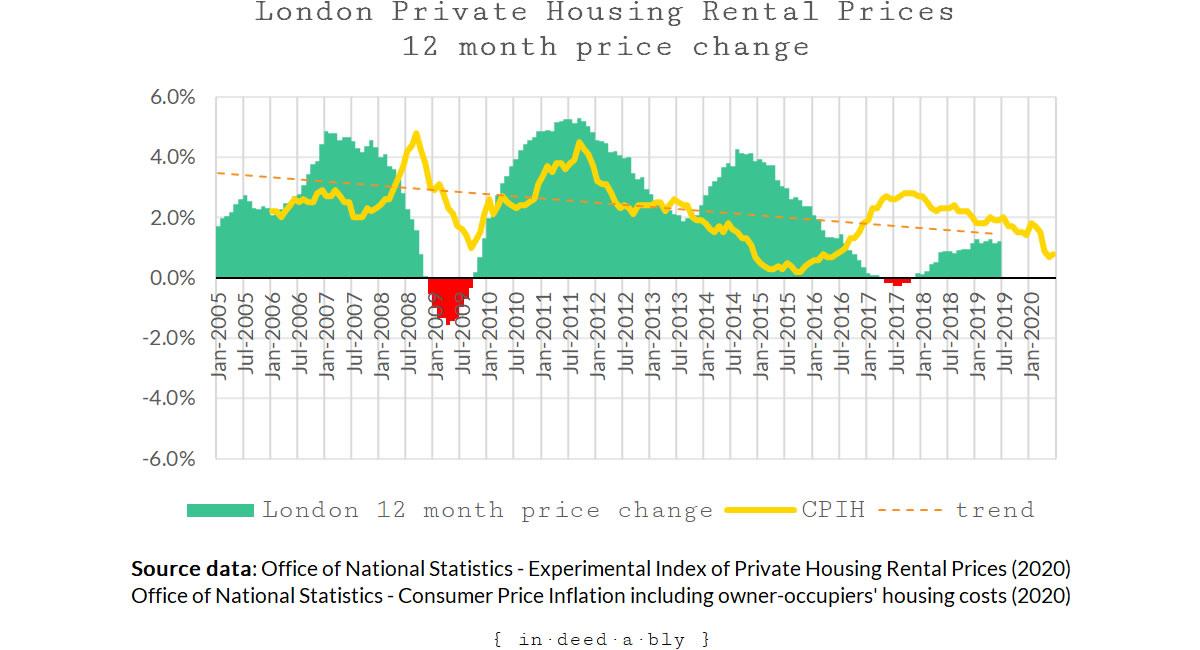 This chart tells an interesting story. It illustrates a couple of laps through the property boom and bust cycles that occur roughly every seven or eight years. The overall downward trend, together with the anaemic growth rates, partially tell the story of a property market where it is difficult to make property cashflow numbers work for private landlords.

Zooming out a bit, I plotted the private housing rental price index values by nation. Out of curiosity, I broke out London from the remainder of England, as in many ways the two exist in entirely separate worlds. 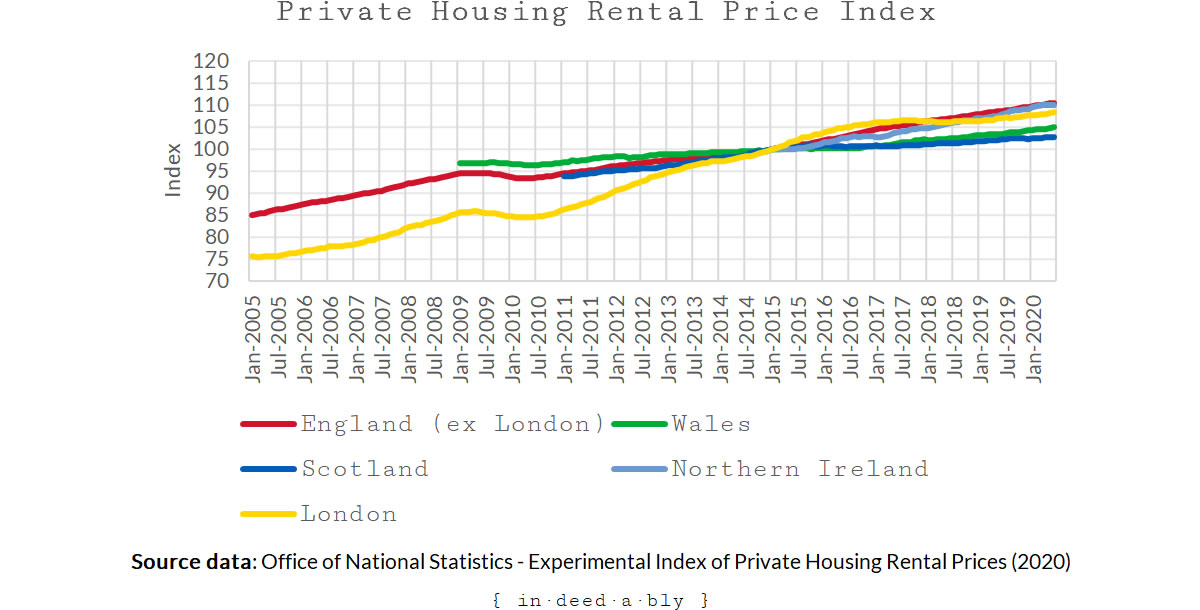 Northern Ireland’s performance since the Brexit referendum result was interesting. It seems more than a few people have acted upon the arbitrage opportunity presented by the land border with Europe.

The remainder of England’s outperformance of London over the last couple of years is the flip side of that same coin. Fear, uncertainty, and a raising drawbridge combining to reduce demand and competition for the overpriced property in the capital.

As this is a lagging indicator, is a bit early for the full impact of the pandemic to show up just yet in the rental price index.

How safe is your castle?

Folks who rely upon passive income streams or natural yield to support their lifestyles will likely be feeling somewhat uncomfortable at the moment. Simultaneous hits have occurred to their three most common forms of “unearned” income: dividends, interest, and rent.

Those who focus on total return when measuring their portfolio performance have cause to feel slightly more optimistic.

The S&P500 is bubbling along at near-record highs. Looking behind the headlines, the recent gains have largely been driven by a handful of large technology companies, Their collective operations benefiting greatly from the pandemic lockdown.

The performance of the United Kingdom market has been underwhelming by comparison, stumbling along at valuations 10% lower than this time last year. 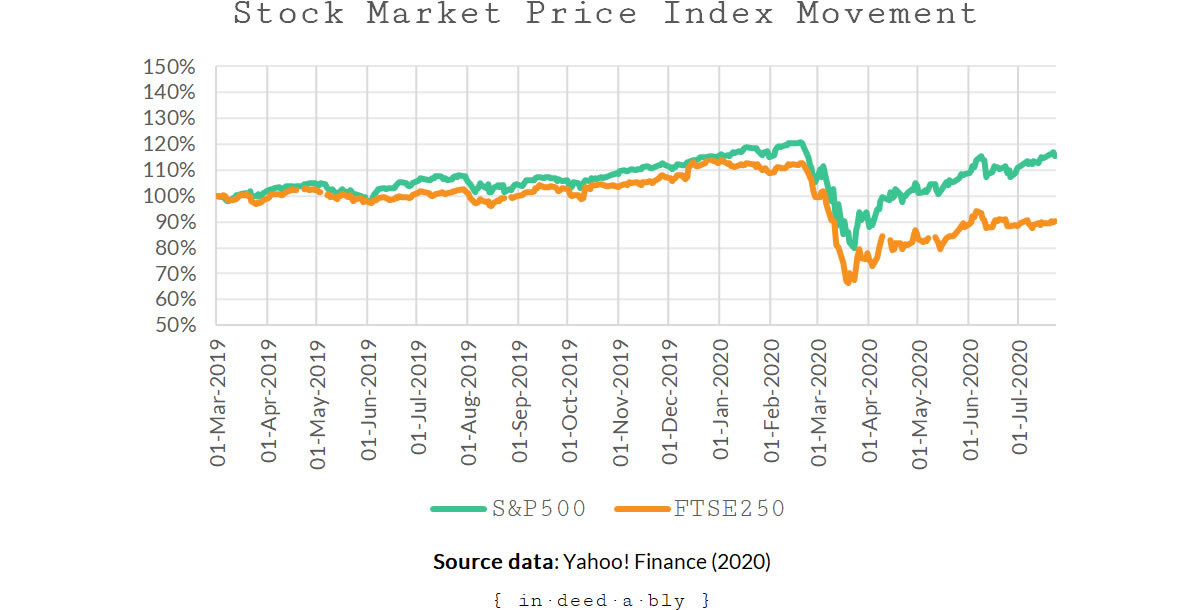 Thunderclouds are gathering on the horizon however, as the Chancellor has called for a review of Capital Gains tax. One potential outcome may be that capital gains are taxed in a manner consistent with earned income.

This would undoubtedly upset a lot of folks. Yet doing so would remove some of the glaring tax avoidance arbitrage opportunities that are built into the system today.

For mine, all people and all forms of income (including capital gains) should be subject to the same rates of tax.

Hopefully, you have managed to weather the pandemic induced economic storm without much in the way of lasting damage. Cheerleaders of the fabled “V” shaped recovery will point to the retail sales figures and flash PMI reports with unabashed optimism that the eventful first half of 2020 will soon be a distant memory.

Pessimists are left scratching their head in bewilderment. Pointing at eye-watering unemployment rates, second wave lockdowns, and a stock market that seems divorced from the uncertain medium term future.

Realists understand that until uncertainty will prevail until a COVID-19 vaccine (that is free from side effects) has successfully been discovered, tested, manufactured, distributed, and widely embraced by the global population.

Until then we will exist in a world of disruption and inconvenience. Schools and workplaces will randomly find themselves ordered to shut down, and their occupants asked to self-isolate or quarantine as COVID-19 outbreaks ebb and flow throughout the population.

What that means for our passive income streams remains to be seen. The charts above illustrate that disruption adversely impacts earnings. With that disruption likely to continue for at least another 12-18 months while a vaccine is worked on, it could be some time before we see passive incomes returning to the levels we had previously taken for granted.