“A little help please!” boomed a deep voice from behind me.

Glancing over my shoulder, I saw a motorised wheelchair attempting to reverse off the overcrowded bus. The occupant had approached the ramp on an angle, and now one wheel teetered precariously on the edge.

Shouldering my way through the crowd of gossiping private school kids attempting to board the bus, I grabbed hold of wheelchair handles just as started to topple.

The guy in the chair must have had a death wish! Despite having tipped off the edge of the ramp, he was still determinedly held the joystick in reverse, with one wheel merrily spinning in clear air.

A couple of seconds later the freewheeling tire found purchase on the curb and the wheelchair surged backwards, running over my boot and nearly knocking me over.

“Watch where you’re going!” I protested.

“Sorry my friend, I didn’t see you there” chortled the occupant in a smooth West African accent, as his chair ploughed through the crush of people attempting to board the bus like a bowling ball through tenpins.

I bit back a terse expletive-laden response as I got my first good look at the disabled man, and realised he was telling the truth.

Wrap around sunglasses, despite it being dusk on a cold and miserably wet London winter’s day.

Dressed in charity shop clothes that could only have been donated by the wardrobe department of a 1980s tv show set in Hawaii.

The overfull bus pulled away from the curb, leaving a crowd of aspiring passengers behind to wait another fifteen minutes in the rain for the next bus.

Life could be worse

I launched into a tirade that could be roughly translated as “Oh bother! The bus leaving without me is an undesirable outcome, on this rather unpleasant evening, after yet another unfulfilling day”.

“Relax my friend, life could be worse!” said the wheelchair occupant, mistakenly thinking I was still talking to him.

I glanced over at him and reluctantly concluded he was correct.

Here was a guy who was just as cold, wet and uncomfortable as me.

He was probably running just as late as I was, waiting for the next bus.

However his path to that bus stop must have been infinitely more challenging than mine. He was blind, wheelchair-bound, a migrant, either very gay or dressed by someone with a sense of humour, and smelled like an incontinent old man.

In that moment the only thing I could think of that might make his life harder was if he was also a long-suffering Canberra Raiders fan!

That thought made me chuckle.

“There you go!” beamed the guy in my general direction, rain spattering his sunglasses.

I pushed past a couple of teenagers to stand next to the wheelchair, opened my umbrella, and shielded both myself and the occupant from the worst of the rain.

Anyone who knows me well would tell you I don’t much like people, and have almost zero interest in making small talk with strangers.

For some reason that night at the bus stop I got talking to the guy in the wheelchair. We had a fascinating conversation about bias, outlook, and world view during what ended up being a lengthy wait for the next bus.

His perspective challenged my own thinking, and caused me to re-evaluate how I viewed the world.

The guy started out by describing how he viewed the world, seeing everyone as equals. 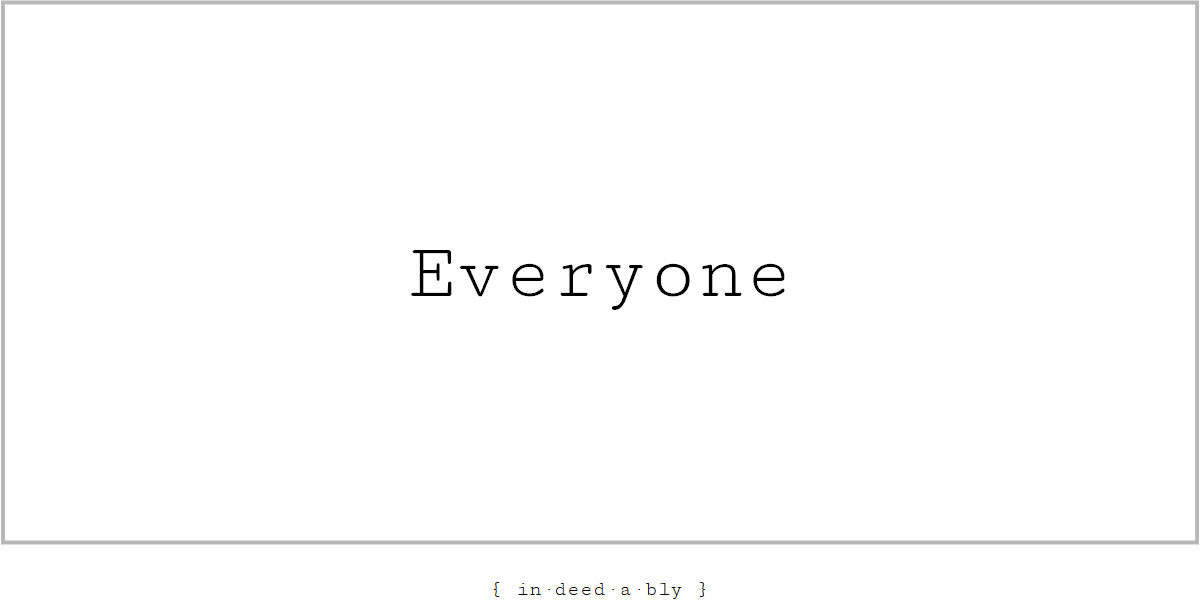 Then he talked about how people want to belong, to feel connected to other people who are like them.

To achieve this they break the world into groups or tribes.

There are those who are like “us”. Able to relate to our experience. Sharing a common identity.

Everyone who does not share that common identity is not one of “us”, meaning they are one of “them”.

The example he gave was the way politicians reduce people to single-issue interest groups:

He likened this to viewing the world through the lens of a child’s toy telescope, like those we associate with seafaring explorers and pirates. 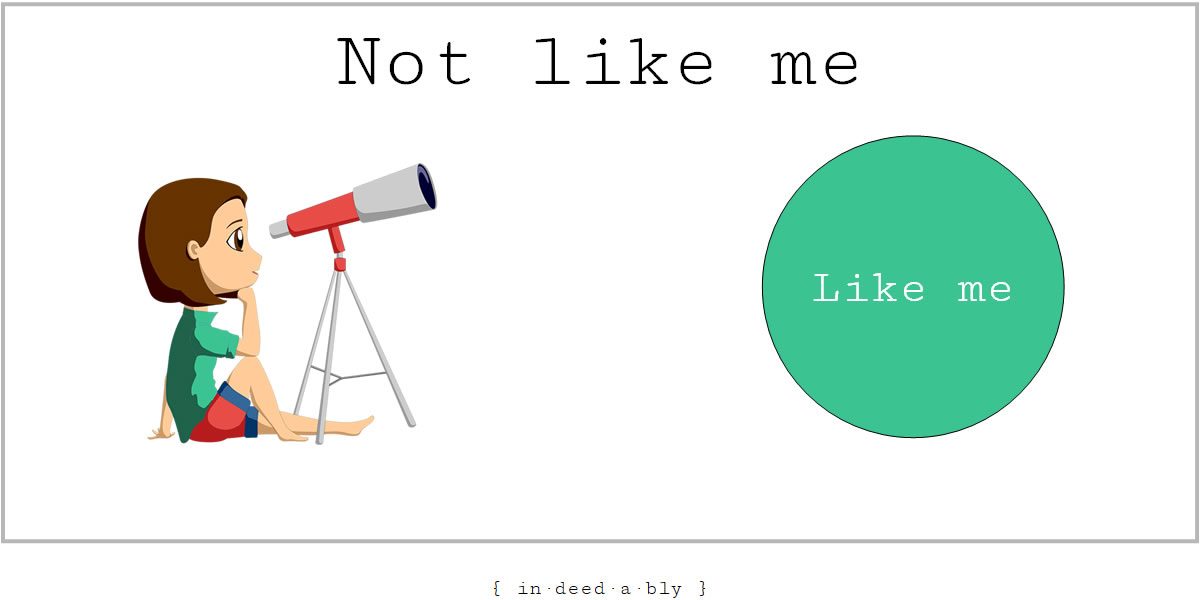 Unfortunately this approach involved adopting a very limited lens, that filters out much of the view.

If they stepped back to see the full picture then they might see a big beautiful landscape. By looking through the telescope they were limited to just a small portion of that view. 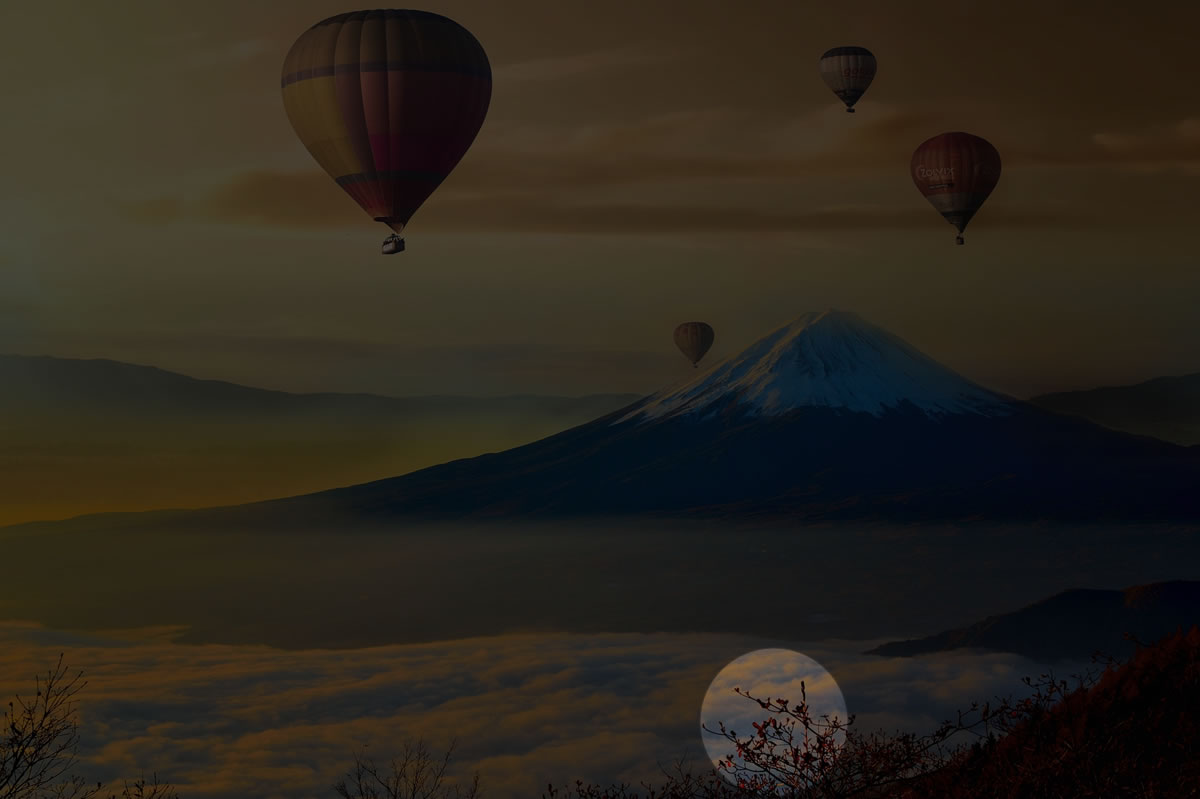 Next he talked about the sorts of things people choose to define themselves by.

In isolation, each of those classifiers serves as a lens.

When used in concert, those lenses partially overlap like a Venn diagram to produce an ever more filtered view of those who are like “us” and those who are not.

He used himself as an example.

Needing a wheelchair to make his way around town made him different from the majority of the population. Simple things like steps and curbs, that most people would simply step over without a passing thought, were major obstacles for him.

His world could be divided into people mindful of those challenges, and those who were not.

However he was also blind.

This created further difficulties for him, making finding and using ramps and drop curbs more challenging for him than most wheelchair users, as he ably demonstrated with his crooked dismount earlier!

Now his world could be further broken down into the following lenses: 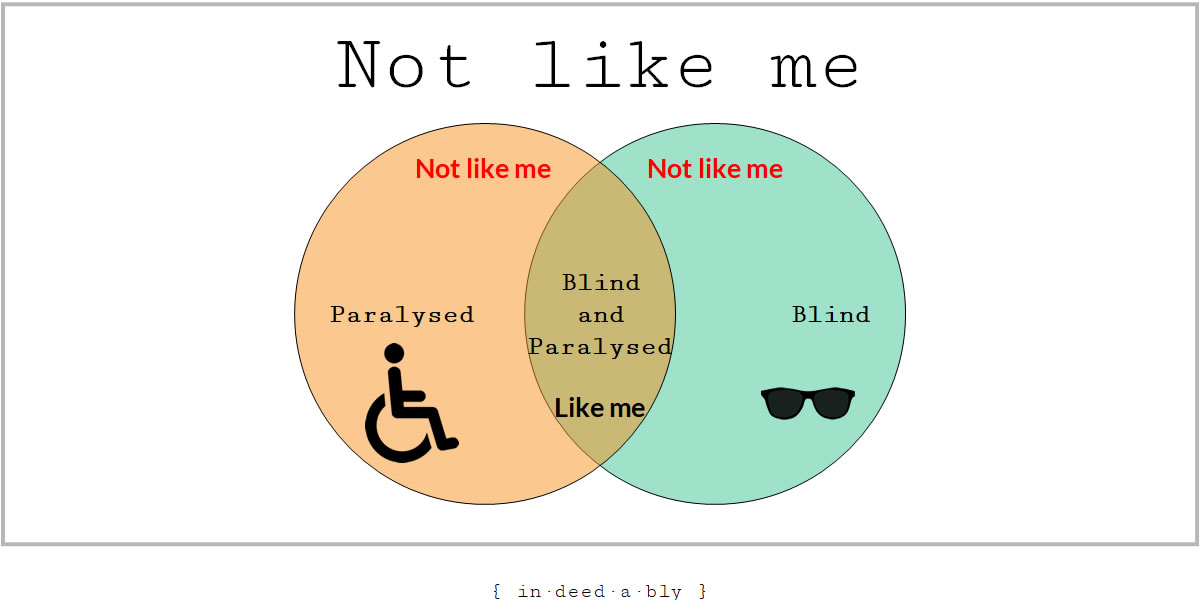 As a result he might feel increasingly marginalised. Excluded. Forgotten about.

His interests not considered or represented when decisions get made.

There was nobody like him on the board of directors.

Flying to the International Space Station. 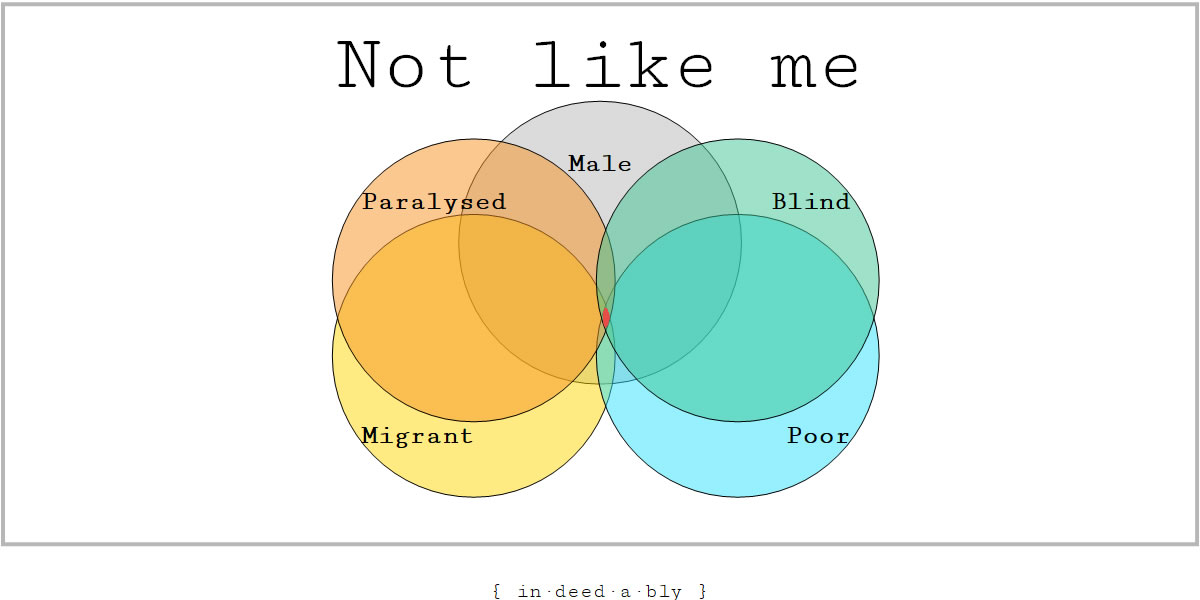 Should they ban football because he can’t play? Surely having able-bodied people running around is insensitive to his disabilities.

How about stairs, because he can’t navigate them unaided? Steps must be discriminatory.

Why aren’t there any blind crippled black men on the boards of any FTSE100 companies? Once again those old white men in suits who rule the world must be devoting vast amounts of their valuable time and scarce energy to actively hold back anyone who isn’t like them. It’s a conspiracy!

Shouldn’t every workplace, every team, every family contain the sort of diversity worthy of the United Nations, with every possible lens or viewpoint equally represented?

At this point, the guy burst out laughing at how ridiculousness that all sounded. It proved contagious.

Finally he talked about stepping back and taking the broader view of issues that lead subsets of the population feel discriminated against. 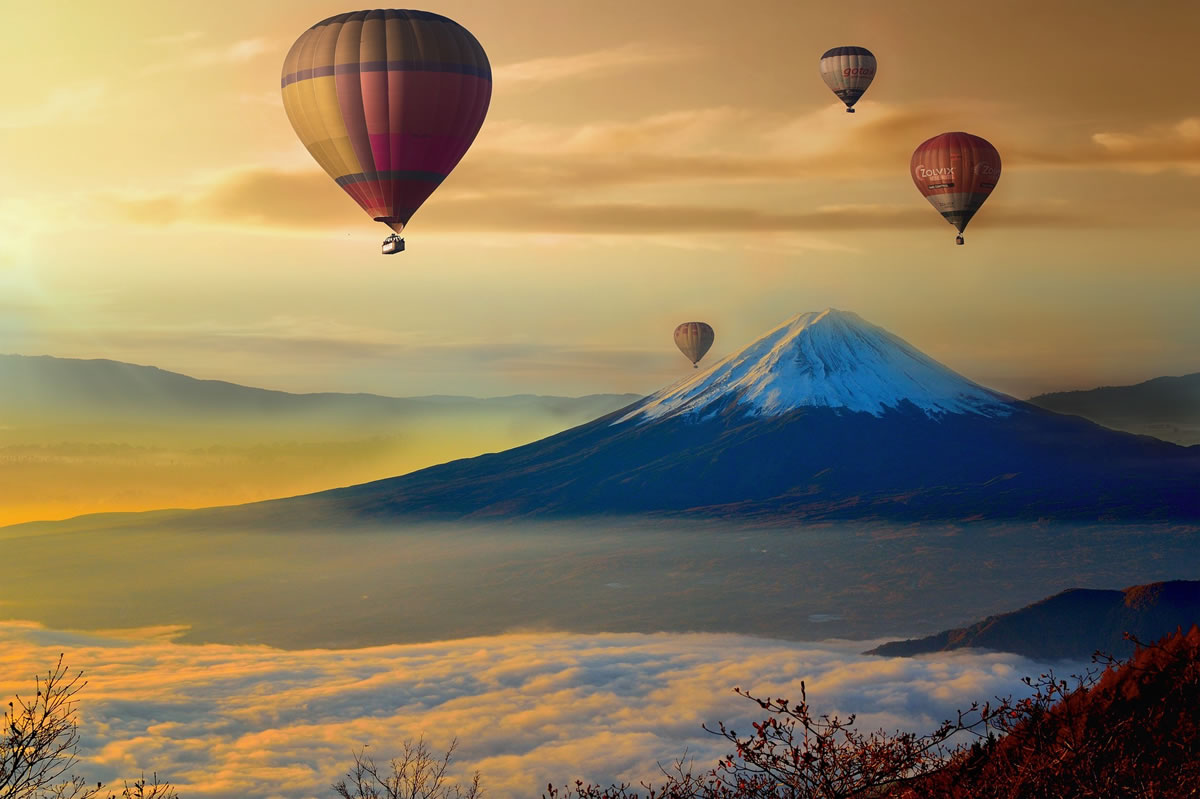 One example he gave was of the difficulties the management at his workplace had in figuring out how to provide toilet facilities for staff members who defined themselves by something other than biological gender.

Any port in a storm

Some female toilets were repurposed, resulting in a capacity problem for those who normally used the ladies toilets.

A simpler, systemic approach would have been to install tampon dispensers and sanitary bins in every cubicle, then declare all toilets gender neutral. Everyone is treated equally and has access to an increased number of facilities.

I think somebody would need to teach guys not to pee on the seat for this approach to work, but that is a different problem!

Another example he cited was the perception that privileged white private school boys float to the top of the corporate ladder, leaving everyone else floundering in their wake.

Approaches suggested to combat this often include the use of quotas and affirmative action. The problem with that approach is that it seeks to use discrimination in order to correct for discrimination.

The guy suggested an alternative approach of requiring each employment vacancy to have a pre-defined list of success criteria and salary.

Each resume gets anonymised and scored against those success criteria.

Each interview candidate gets scored against those criteria.

The winning candidate is offered the job at that pre-determined salary. If they want more money, they can find a different job. If the applicant would have been willing to do the role for less then they receive an unexpected windfall.

Interested candidates should be able to request the (anonymised) resume and interview scoring for all the applicants, in order to see where they were found wanting.

The guy believed this approach would end the gender pay gap for new hires, and reduce discrimination in hiring practices.

I applaud the rigour imposed by having pre-defined success criteria for grading candidates, as well as having a pre-determined salary for each role.

However I have my doubts about how effective the approach would be in practice.

Employers are going to hire whom they want to hire, whatever the constraints or systems put in place. In theory access to the scoring would allow an unsuccessful candidate to challenge an unjust or indefensible hire, but it is hard to see this ever resulting in the employer admitting bias and hiring the unsuccessful candidate instead.

For mine, a hire should be the best available person who is suitably qualified for the job.

Each hire should be provided with the tools and equipment they need to succeed. If that hire needs a screen reader to work around a visual impairment, a dictation capability to manage carpal tunnel, or a raised desk to accommodate a wheelchair then this should be no different to the provision of a laptop or a chair to an able-bodied person.

However in practice subjective factors like “team cultural fit” will always provide an out for hiring managers seeking to circumvent the system.

It is the achievement, not the qualifier

The guy’s final thought, before he rolled onto the bus, was that qualifiers create barriers and are divisive.

Headlines like “Oscar-winning black actress” should read “Oscar winner”. The achievement is winning the prize. That the winner was black or female is irrelevant.

“British Paralympic wheelchair marathon winner” paints a nationalistic picture of somebody disabled, when the real story is a competitor deservedly won a gold medal for covering the 42 kilometres faster than anyone else. Their home and disability don’t change that story.

On my own bus ride home I reflected on the conversation.

I respected how upbeat and positive the guy in the wheelchair had been. He appeared to have incurable optimism.

Life had dealt him a shitty hand. Being born paralysed in west African must have made for a difficult childhood. Losing his sight as an adult must have been devastating.

Yet despite that, he was all smiles.

He somehow managed to traverse the mean streets of London, hold down a job, and possess a remarkably optimistic outlook on the world.

Then I gave a wry grin as I caught myself doing exactly what he thought people shouldn’t do!

Applying qualifiers to people, and undermining their achievements as a result.

The remarkable thing was his optimism.

That he was blind, paralysed, or wearing a shocking Hawaiian shirt on a cold London night were all interesting, but irrelevant to that!