I walked past the newsstand in the station. Headlines shouted things like “House asking prices hit record levels across Great Britain” and “House Prices rise at the fastest rate in 17 years”.

A couple of hours later a series of estate agents filed through one of my buy-to-let properties, conducting marketing appraisals.

Centrally located in a trendy neighbourhood that has been in high rental demand for as long as I have lived in London. The sort of place young couples or flat sharers working in their first professional jobs out of university rent together. A short commute to work. Staggering distance home, after a night out on the town.

The sharp suits and slicked-back hair worn by the estate agents were familiar. However, something was missing. The oozing overconfidence and brash manner. Those smug boasts about the vast numbers of properties they had sold in the last month.

Instead, they were reticent. Almost sombre. Too much stock. Too little selling. A real buyer’s market. The likes of which the youngest of the agents had not previously experienced.

The first agent lamented that the last time his firm had sold a property for me, his local office had a team of eight negotiators working out of it. Today there were only two. The herd ruthlessly culled as business steadily declined. The firm’s “neighbourhood expert” sales team approach had been abandoned in favour of a leaner single centralised team. His beat now covering a large chunk of the city. His local knowledge barely matching that of a keen buyer researching properties on Rightmove.

The second agent complained that he had a book containing over 80 active listings, yet there was little sales activity. He was conducting more appraisals than property viewings. Delusional vendors reading headlines about the national booming market. Failing to recognise that those figures were a composite of thousands of individual local markets, each experiencing very different conditions.

Difficulties conducting in-person viewings due to COVID had created an unusual environment, where well-informed buyers were being led by heads rather than hearts. Careful research. Targeting properties based on price per square footage metrics. Proximity to schools, shops, and services factored in. Offers resembling carefully targeted sniping than the traditional shotgun and pray approach.

The third agent was the youngest. Anxious. Flighty. Fearful for his job, after rumours his firm was attempting to negotiate an early exit from their office lease. Remarkably frank for an estate agent, stating neighbourhood prices had plateaued back in 2015, with no real growth experienced since.

He was at a loss to explain who was going to buy them all?

The numbers no longer worked for buy-to-let investors. Travel restrictions were keeping overseas buyers away. Remote working had, temporarily at least, eliminated the demand for inner-city shag pads for masters of the universe with families living out in soulless commuter villages.

All of them hoped that the “Boris beats COVID” narrative works out better than the whole “Boris does Brexit” debacle had done. Rescuing the economy. Breathing some life into their local property market. The second half of the year would be better. It had to be.

As he was leaving, the third agent confessed he was looking into going back to school and retraining. Commissions were proving to be a tough way to make a living during a down market.

That evening, the marketing proposals trickled in.

All three agents recommended the same asking price. The language in the proposals was fascinating.

One agent expressed “confidence” they would sell the property. Eventually.

Another highlighted, twice, the challenging market conditions and glut of supply.

They would normally value a property then whack on 20% to secure the listing. Subsequently dropping the asking price a couple of weeks into the marketing campaign, due to weak interest from prospective buyers. They professed that a newfound honesty was the order of the day in the current market, seeking to manage vendor expectations from the outset rather than trapping them into an exclusive marketing contracts that left owners feeling like they had been conned and lied to.

The final appraisal appeared reluctant to take on the listing at all. Not a great time to be selling. Difficult to foresee when (if?) market conditions were likely to improve.

All three strongly recommended doing whatever was necessary to keep the existing tenants in place. There were even fewer prospective tenants in the market than prospective buyers, so should the property fail to sell, vendors faced lengthy void periods between tenancies.

A couple of days later, I was speaking to one of the imaginary internet friends I have gotten to know a little through writing this blog. Their day job? A buyer’s agent. Finding properties for the indecisive, remotely located, or time-poor. Helping negotiate the price and secure the purchase. Like a good mortgage broker, more than paying for themselves by obtaining hard to find attractively priced deals.

They declared that the current booming market was largely artificial.

He reported an alarming number of purchases were falling through at the valuation stage, as uncharacteristically cautious lenders questioned the inflated offers that aspirational homeowners were making for their next abode. The gulf between rose-coloured lifestyle dreams and cold hard numeric realities tripping more than a few loan-to-valuation thresholds.

The popular narrative was the stamp duty holiday had uncorked vast amounts of pent up demand. Transactions frustrated by COVID restrictions, as those living in cities fled to rural villages in search of the good life. Flats dwellers seeking additional room and outdoor space to escape their nearest and dearest after a year of close quarters living during lockdown confinement.

The buyer’s agent had a different view. The breathless headlines were mostly citing year-on-year comparisons. A deceptive take, given last year the market had effectively been shut down by COVID restrictions. Any activity would look bullish by comparison.

That said, the number of transactions completed were the highest they had been since just before the Global Financial Crisis.

The agent believed the stamp duty holiday had simply pulled forward 3-4 years worth of transactions into an artificially constrained window. They predicted the property market would fall in a hole as the tax breaks concluded and normalcy returned.

The buyer agent’s primary source of business had historically been overseas purchasers, who viewed the United Kingdom property market as a safe store of value in which to park their excess riyals, rubles, rupees, and yuan.

While some clients sought to minimise their holding costs by letting their investments out, many didn’t bother, concluding the low yields on offer didn’t warrant the hassle.

Other clients purchased properties for their offspring to occupy while studying at some of England’s finest universities. Offering more comfortable accommodations than the traditional student residences or new breed of well-appointed commercial digs.

Brexit uncertainties had apparently led their more honest clients to seek alternative jurisdictions for their investments. Australia, Canada, and New Zealand all proving popular destinations offering a strong rule of law and favourable tax treatment for property investors. A willingness to ask few questions and look the other way meant the UK remained a popular destination of choice for funds with more dubious origins.

Like the young real estate agent, the buyer’s agent was also considering a career change away from what they expected to be a stagnant property market over the medium term.

Was their assessment correct? Pessimism warranted? I have no idea. All will be revealed in time.

Out of curiosity, I did some research into what had happened the last couple of times major stamp duty changes had occurred. 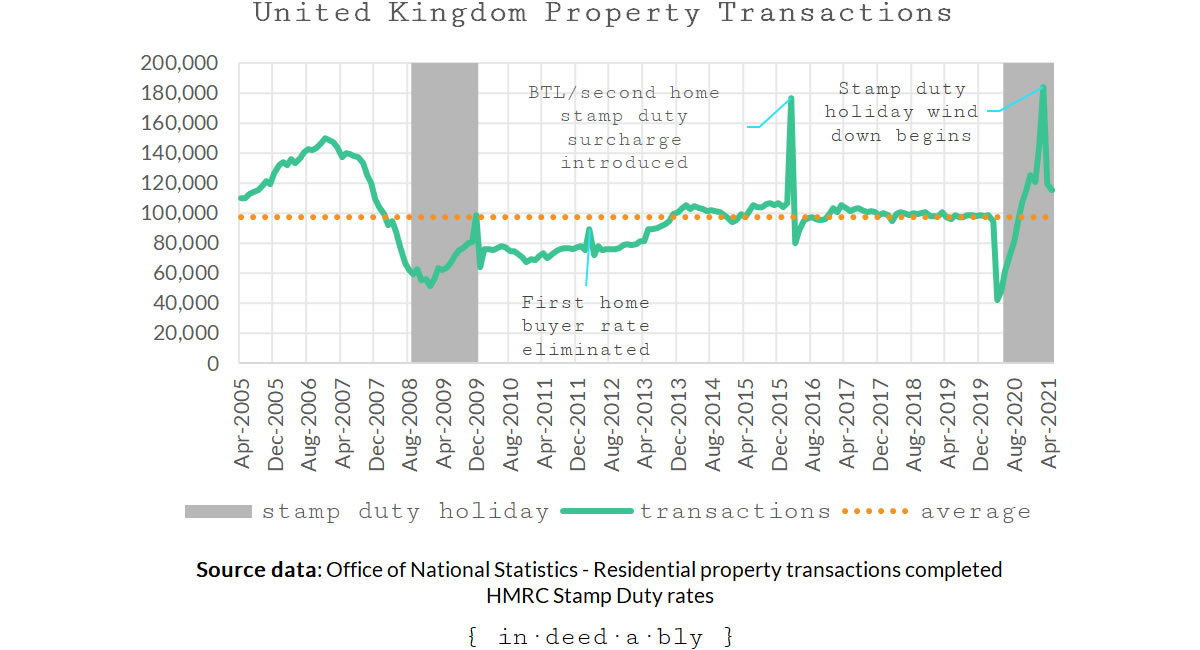 Predictably, there was a run-up in transaction volumes as the change deadlines approached, followed by a noticeable lull in their aftermath.

In 2016, transaction volumes had returned to average levels within six months.

Back in 2009, the recovery took 4 years, as the economy struggled with its GFC hangover.

But recover they did.

It reminded me of the old joke about funeral parlours being great investments because people never stopped dying. Creating an endless sales funnel of grieving families to guilt into purchasing overpriced coffins, hearse rentals, and remembrance merchandise.

In a similar vein, life happens events never stop happening. People are always going to be moving homes due to changes in their circumstances. Education. Employment. Family size. Relationship status.

That said, transaction costs introduce friction and influence the behaviour of buyers.

The greater the friction, the less likely the buyer is to complete a purchase.

Back in the heady property boom of the late 1980s, most property purchases incurred a stamp duty charge of 0%. It was no coincidence that the average homeowner at the time moved house once every 8.63 years.

In the days immediately before COVID, property purchases incurred an eye-watering levels of stamp duty. Transaction costs of up to 2% on median-priced homes in England, 5% for median-priced homes in London, and up to 12% for those wishing to live on millionaire’s row. Add on another 3% for anyone who owns multiple properties in their own name, and pursuing the Monopoly approach to getting rich starts to look like a very expensive endeavour.

Unsurprisingly, by 2019 the average tenure for homeowners had more than doubled to 20.8 years.

The contrast between the media headlines and my property’s local market is jarring. It is always worthwhile doing our own research into the numbers, and drawing our own conclusions rather than blindly accepting whatever the bloviating talking heads and spin doctors would have us to believe.

Even within a local market, there can be very different trends concurrently occurring for different types of property. Single-family houses in great demand, but apartments you might struggle to give away.

I’m undecided on what course of action I will take with this investment property.

I share the agents’ collective curiosity about where the next generation of buyers will come from?

Who will be the greater fools that step in to rescue harassed landlords and overstretched owners, once quantitative easing winds down and interest rates begin to climb to see off the dark clouds of inflation gathering on the horizon?

I also wonder about the long term prospects for London residential property as an investment class.

An increasingly hostile regulatory environment, combined with embarrassingly low yields, make many investment properties pure capital gain plays. Wherever the investor is not actively creating value via extension, rezoning, subdivision, or title consolidation this approach relies largely on educated guesses and hope. Not the typical foundations upon which a sound financial plan are based!

I will be watching the migration statistics with interest over the next year or two, to see if the world’s ambitious entrepreneurs, financiers, students, and technologists continue to seek out experience and fortune in London. Or whether the City loses its lustre, reduced to mere sales office outposts for organisations who make all their important decisions elsewhere.

Not a topic I’m well-informed enough about to hold an opinion on currently. Yet the long term prospects of my local property holdings are directly linked to the answer of that question.

Tell me your secrets