The door violently rocked back on its hinges. A bedraggled looking figure stood in the doorway, silhouetted by street lights.

Umbrella turned inside out.

Hair looking like it had been blow-dried with a jet engine.

Emanating stress. Tension palpable in the set of the shoulders. Jaw clenched.

Wild eyes radiating menace. Not unlike the final thing a halal animal must see before receiving the dhabīḥah treatment. Animals innately sense the danger. The smell the fear and death in the air. Their lizard brains firing off primaeval warning signals.

My lady wife had arrived home from work.

Her employer had recently initiated a round of belt-tightening.

Swapping outsourcers for a cheaper provider.

Purging contractors rather than dealing with IR35.

Relocating back-office staff, away from the gilded towers of the City, banishing them to one of London’s distant armpits. Adding 45 minutes to her daily commute. Each way.

The changes were carefully timed and executed.

The C-suite betting that the majority of their staff would depart, saving on redundancy payouts. Yet relying on their greed to keep them in place long enough to cover the transition between outsourcers. Annual bonuses earned but not yet paid, providing golden handcuffs for employees to shackle themselves with.

Unsurprisingly, the firm had only taken out a short term lease on the new building. Those staff who didn’t quit would eventually be made redundant. Their jobs destined for lower-cost locations abroad.

A familiar story. One that most had experienced before at previous employers. My lady wife included.

Storming inside, she slammed the door. Windows shook the length of the street. One of the many joys of terraced housing.

Ignoring the greetings that were called out from various parts of the house, she grumped upstairs. A trail of discarded wet clothes, bags, and shoes left in her wake.

Half an hour later she emerged wearing fleecy pyjamas and a death stare capable of dropping pigeons from the sky.

With trepidation, I approached the situation like I might attempt to open a soft drink can after dropping it down a flight of stairs. Cautiously. From a (hopefully) safe distance. Resigned to the likelihood of being on the receiving end of an unpleasant spray.

Knowing it is probably better to wait. Yet doing it anyway.

The eruption could be heard several time zones away.

Trade winds and the migratory patterns of birds were temporarily disrupted.

Seismometers in all seven continents detected a noticeable movement on the Richter scale.

My lady wife had checked the balance of her brokerage account on her way home from work. The markets had experienced a tough couple of weeks. She was apparently down by the equivalent of more than four year’s wages.

It would be fair to conclude she was somewhat underwhelmed by that outcome.

To her mind, that meant that all her hard work over the last four years had now been done for free.

Frequently skipped school concerts, sports days, and family holidays. Missing out on the fun while single-handedly attempting to save the world from short-sighted management and disinterested outsourcers on behalf of ungrateful customers.

Time zone tennis resulting in conference calls at all hours of the day and night.

Now, what did she have to show for it?

Another greedy employer who was actively fucking her over. A shitty commute packed like cattle into overcrowded trains. The merest hint of a sneeze sending ripples of coronavirus panic throughout the assembled herd. All trapped. Nowhere to go. Meekly accepting their fate. A day trip to the abattoir.

She was understandably upset. More than a little frayed.

Fear of the unknown

Our local supermarkets look like looters have been through them. Shelves empty of just about every packaged or processed product. Yet well-stocked with fresh fruit, vegetables, and dairy. For now.

The pharmacy had been unable to fill her prescription refill. Nor had the next ten she had tried. Supply chain problems. Something we will all need to get used to.

One kid’s school threatening to close. The other uncertain if they would reopen after the holidays.

Media making it feel like the end of days was imminent. An endlessly self-perpetuating cycle of fear, rumour, and uncertainty. Hyping as if their livelihoods depended upon it. Because they did.

Government propaganda downplaying the reality on the ground. A neighbour, and recently retired nurse, asked to return to service. A father at my younger son’s swimming lesson, a psychiatrist, told to prepare for an extended return to the frontline.

Rumours of what is to come.

Food and medicine rationing. Global hunger has ever been a logistical rather than a supply problem. That recurring theme of disrupted supply chains rearing their ugly head yet again. The joys of living on an island.

Restrictions on access to healthcare services. Survival of the youngest and fittest.

Restrictions on movement. First to prevent the spread of disease. Later to protect shops and farm infrastructure from mobs of scared people wanting to feed their families.

Essentially the opening chapter of every dystopian novel and zombie apocalypse movie ever written.

A glimpse into the future, or figments of an overactive imagination? Only time will tell.

As my lady wife’s epic rant for the ages started to wind down, the tension in her shoulders visibly eased. She was unsettled, uncertain, and afraid of the unknown.

Understandable. We all are.

Fortunately, she has not yet thought about the real financial impacts of the pandemic.

What happens when our tenants lose their jobs and are unable to pay their rent?

How long will it be before my clients mothball their projects and stand down their non-recurring workforces?

How long can I keep paying my staff, before having to choose between feeding their families and feeding my own?

Later that evening my elder son asked me to put him to bed.

Long ago this was a daily occurrence, but these days it is a rarity. He often stays up later than I do.

My son was unsettled. He didn’t like seeing his mother wigging out.

He was also wary that closed schools and compulsory working from home would create a pressure cooker environment, without the circuit breaker provided by routine activities and socialising outside of the household.

Then he asked if it was true that someone had stolen his mother’s wages for the last four years?

Should we call the police?

Maybe insurance would cover it?

If we know who took it, could we knock on their door and ask them nicely to give it back?

If they said no, could we ask them less nicely? Like people used to back in the olden days when they were allowed to hit each other without getting in trouble?

I couldn’t help but smile. He a good kid trying to help in a situation he didn’t understand.

Then I started to explain the concept of paper losses.

His mother’s money hadn’t been stolen from her.

She had saved some money from her monthly pay packet and invested it in the stock market.

Those gains or losses wouldn’t become “real” until his mother wanted to sell her investment. At that point, the market would tell her what it thought her investment was worth at that particular moment.

I called up the S&P500 index chart for that day, the same day that Donald Trump had signed and boastfully delivered a similar chart to big-note his ability to move the markets. 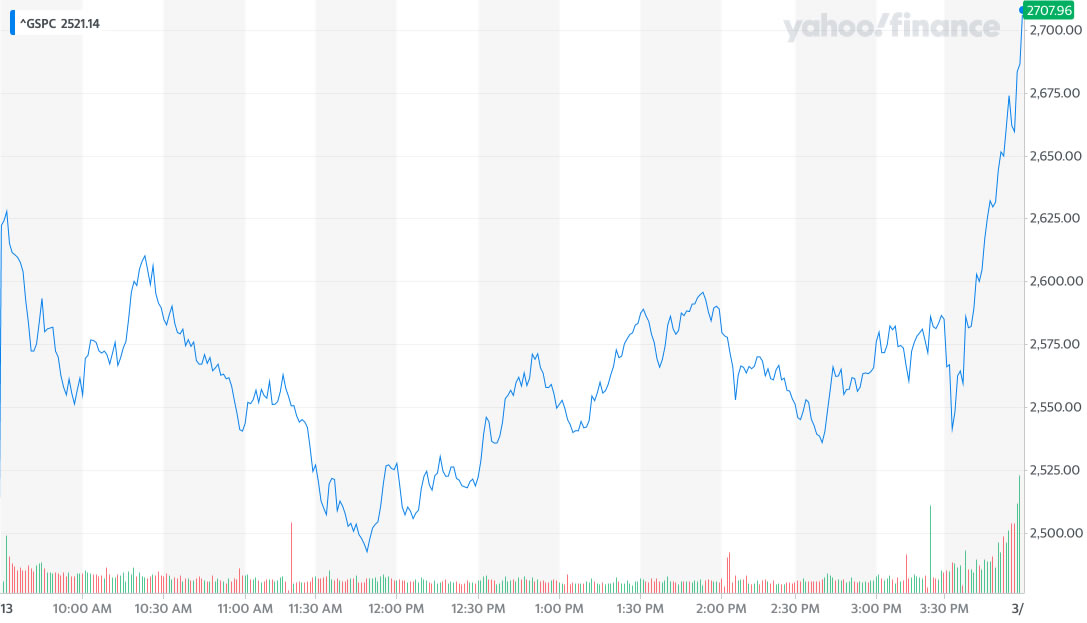 I asked my son how much money he would have needed to purchase a single share in the index at the start of the day’s trading?

Next I asked how much the investment had notionally been worth at the close of trading that day?

Then I asked him how much he had invested?

How much had he made?

He took the iPad and did a quick calculation. “Closing price minus opening price equals $141.03”.

I called bullshit and told him he was mistaken.

My son looked puzzled. Checked his figures. Then argued that he was correct, the current value of the investment was $141.03 more than what he would have paid for it.

I asked him whether he had actually sold the share at the end of the day’s trading?

He shook his head. Of course not, this was a make-believe game. A fantasy.

To which I replied “Exactly!”.

He hadn’t sold, so he hadn’t “made” anything. The gain was pretend. It would remain a figment of our imagination, existing only on paper, until we actually sold the share.

Next, I zoomed the chart out to show the last month’s market activity. It made for grim reading. 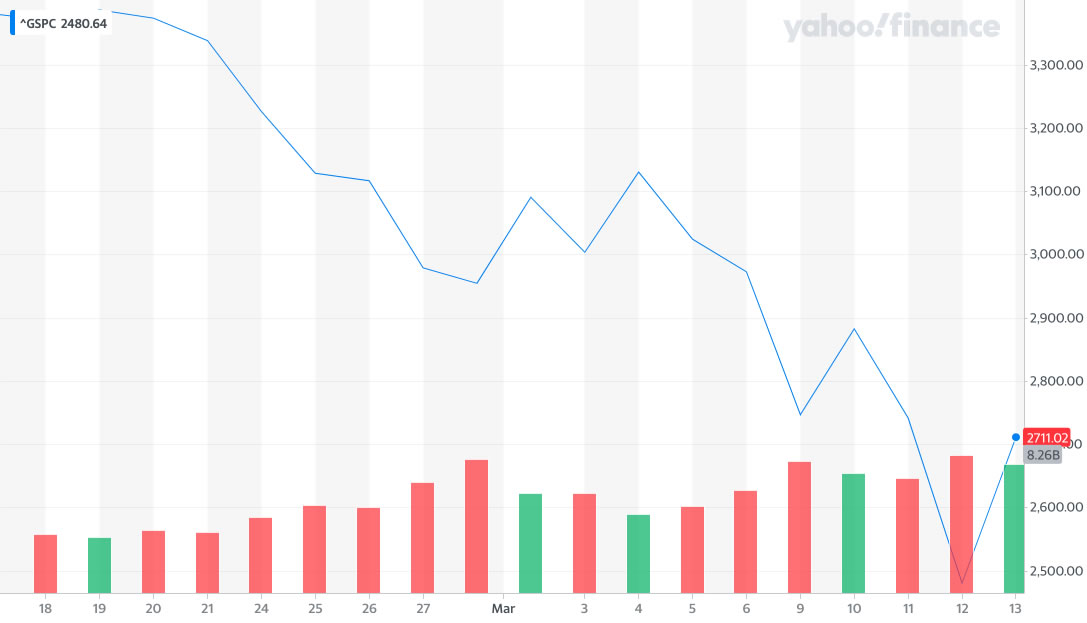 I asked him to repeat the exercise. If he had purchased one share at the opening of the month, how much would he have invested?

We already knew the closing price, so I asked him how much he would have made over the course of the month.

He looked at the chart that resembled a ski jump and shook his head. “We would have lost money. It finished the month lower than it started”.

I asked him what percentage of our investment we had lost?

Again with the calculator. “It is down about 20%”.

So how much had we lost?

He started to answer, then paused. Tentatively he replied “we didn’t actually lose anything if we didn’t sell. It would be a paper loss only”.

I nodded. He was starting to get it.

Finally, I zoomed out to a 5 year perspective. Despite the recent pullback, the market had risen markedly over that period. 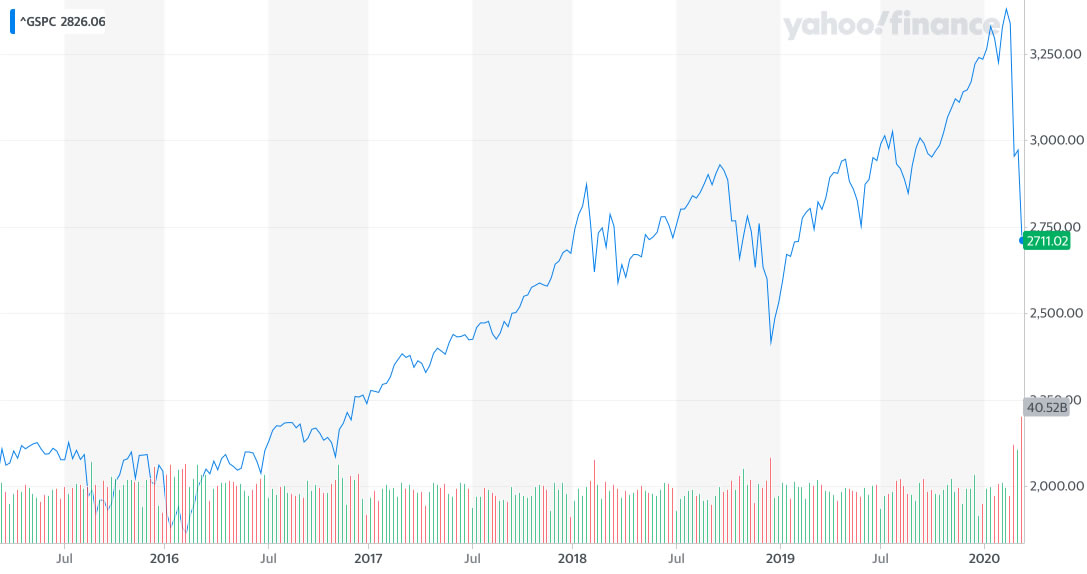 His fingers tapped at the iPad screen.

“The market has risen about 30% over those five years. A month ago that was more like 65%.”

So how much had we actually made or lost?

My son grinned. “Nothing, if we didn’t sell”.

Then his smile faded. “But Mum said she had lost four year’s wages?”.

I asked him again how much he would have invested if he had bought a share at the start of the five year period?

And how much would he have “lost” as a result of the recent downturn?

He reached for the iPad, but then stopped.

“Nothing. We didn’t sell. And even if we did sell, we are still ahead of where we were five years ago”.

So how much had his mother actually lost?

“Nothing, if she didn’t sell. She is just sitting on a smaller paper gain”.

Paper gains put a spring in people’s step. Have them believing they are investing geniuses. Get them thinking about all the nice things they could spend that extra money on, were they to sell.

Paper losses ruin people’s day. Fantasies stymied. Having their dreams curtailed certainly stings, even if there were no actual losses.

My lady wife may well have seen the value of her portfolio fall by the equivalent of four year’s wages.

However, she had been investing for far longer than that. Just like the story that the five year index chart illustrated, her investments are still worth more than the amounts she has contributed from her salary over the years.

She remains comfortably ahead.

There were no burglars to report to the police. No bad guys who needed beating up. The only thing that has been lost is paper money.

A volatile fantasy number forever fluctuating at the whims of the market gods.

For mine, until I actually need the money I am content to let my investments ride the rollercoaster of volatile markets and not pay too much attention to the daily vagaries of price.

To quote the renowned investing genius GameKyuubi, who once eloquently stated: “I am hodling“.

Whether that proves to be celebrated bravery or blind stubborn stupidity can only be judged in hindsight!