On a bitterly cold day, five-year-old me shuffled my gumboots through a pile of fallen leaves half as tall as I was. Amidst the kaleidoscope of autumn colours, I spied a yellow banknote.

Paper. A bit soggy. Featuring the portrait of a smiling old man wearing glasses and a dodgy bow tie. Prominently displaying the number 50 in the corner.

I picked it up, and with much excitement stumbled after my father striding down the footpath.

He slowed as I called out, and his eyes lit up when he saw the banknote I waved in my icy fingers.

“Wow! Where did you get that?” he asked, as he extracted his wallet from his back pocket.

“Tell you what, why don’t you give me that wet yellow one? I’ll give you two dry banknotes in exchange. Two is better than one, right? A nice green one, and this brown one with pictures of kangaroos on it!”

I suspiciously eyed the two pieces of paper he proffered.

The green note featured the picture of a sheep and had the number 2 in the corner.

The brown one did indeed show a mob of kangaroos below the number 1.

I tentatively exchanged my $50 note for the $3 my father waved in front of my face.

After I had carefully examined them both, my father plucked them from my five-year-old fingers and popped them back into his wallet for “safekeeping”.

On the way home, my father decided we should celebrate. Having no comprehension of price or value, my five-year-old mind fantasised about eating Freddo Frogs while playing with some new Lego.

My $3 purchased a cask of cheap supermarket wine for my father, and earned me a loud ringing sensation in my ear when I protested about the unfairness of that outcome.

The stories we tell

This week I’ve invested a bunch of time, consuming over 1,300 pieces of Personal Finance content.

Nearly every article, post, story, or video produced in the last 90 days. By nearly every English language blogger based in Australia, New Zealand, Europe, and the United Kingdom.

Been entertained a lot.

Discovered some great new (to me) voices.

Mentally associated podcasts with talkback radio, a linkage that once made cannot be unseen.

Recognised a delicious irony. My attention span is too short for YouTube! I can comfortably skim a dense 1,500 word article, or the transcript of an hour-long interview, in less time than it takes to sit through a low calibre listicle video full of advertising and self-promotion.

I was saddened to learn of the death of a creator I regularly read a few years ago. The demise of several once great blogs. An alarming number of long-dormant blogs idling in the departure lounge.

This exercise reminded me that there is a lifecycle to content creation.

Starting with a burst of creative enthusiasm. Full of ideas.

After a while posting frequency falls away. Competing priorities and waning interest conspiring to lure the creator onto other things.

For a time, their creative outlet remains as a monument to a passing fancy. Tumbleweeds rolling through abandoned social media accounts, serenaded by the sound of crickets.

Eventually, the hosting contract may expire, rendering the endeavour a distant memory. A ghost in the Wayback Machine.

The exercise also reminded me that each creator is part of the way through a unique journey. Doing things their own way. Learning at their own pace. Following their own interests. The “personal” part of Personal Finance.

Much of the content was good. Entertaining yarns. Teaching a lesson or two. Sometimes both.

Some of it was bad. Errant. Foolish. Misguided. Wrong. Strongly held opinions not grounded in fact.

A minority were downright deceitful, bordering on fraudulent. Selling impossible dreams to a self-selecting audience of perceived easy marks. An audience seeking to improve their finances, but lacking the knowledge required to spot the charlatans, sharks, and shysters who prey upon them.

That day long ago, my simplistic fantasies met with a harsh reality check.

Reflecting back on it now, from the safe distance of some 40 years, I learned several things from the experience.

Expected outcomes can be overly optimistic.

Fairness and justice are the stuff of fairy tales.

Predictions for the future should take into account predictable externalities.

That challenging my father was best done while wearing a helmet and with a running start!

Looking through all those pieces of Personal Finance content, I frequently witnessed a pattern of wishful thinking and oversimplification.

Many Personal Finance bloggers eventually write a “power of compound interest” post at some point. A simple chart demonstrating a snowball effect. The misattributed Einstein quote. Perhaps a neat table illustrating that compounding and patience are all that is required to become a millionaire.

Which is fine, as far as it goes.

The sort of simplistic example we might expect to see in a high school maths textbook, teaching children how to perform compound interest calculations.

Except here is the thing. These explanations present a rose-coloured view of a predicted financial outcome. A feat that is technically possible, yet the chances of an investor’s performance actually achieving that outcome are vanishingly small. Like successfully timing the market. Or predicting which fund manager might outperform the index over each of the next three years.

To illustrate, let’s pretend my long lost $50 banknote had been deposited in my bank account, rather than pilfered by my father.

I used the overnight interbank rate as a rough proxy for interest rate my bank account might have received. Rates climbed to over 30%, before falling back down to the near 0% rates we see today. The average rate throughout that period was 6.45%, yet in the real world there was none of those nice smooth constant and predictable linear progressions seen in the textbooks. 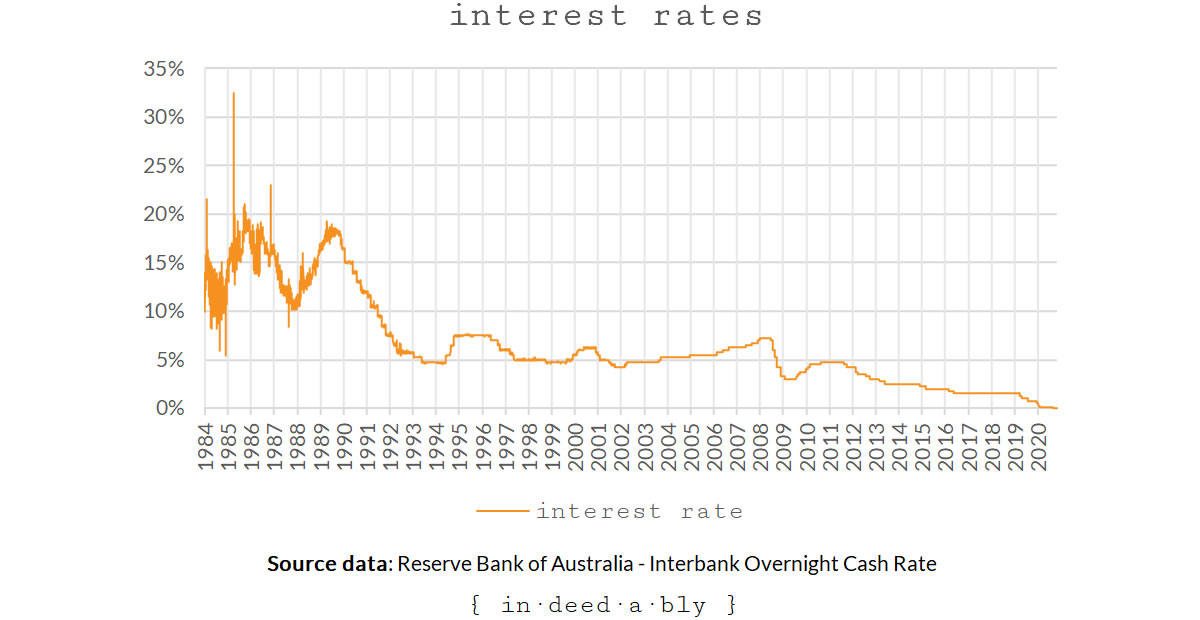 Next, I applied those rates to a starting balance of $50 which resulted in a familiar “power of compounding” chart, though my curve is perhaps a bit lumpier than most. Today, that $50 would have grown to $259, a 5x investment outcome. That is an annualised rate of return of 4.55%. Hurrah! 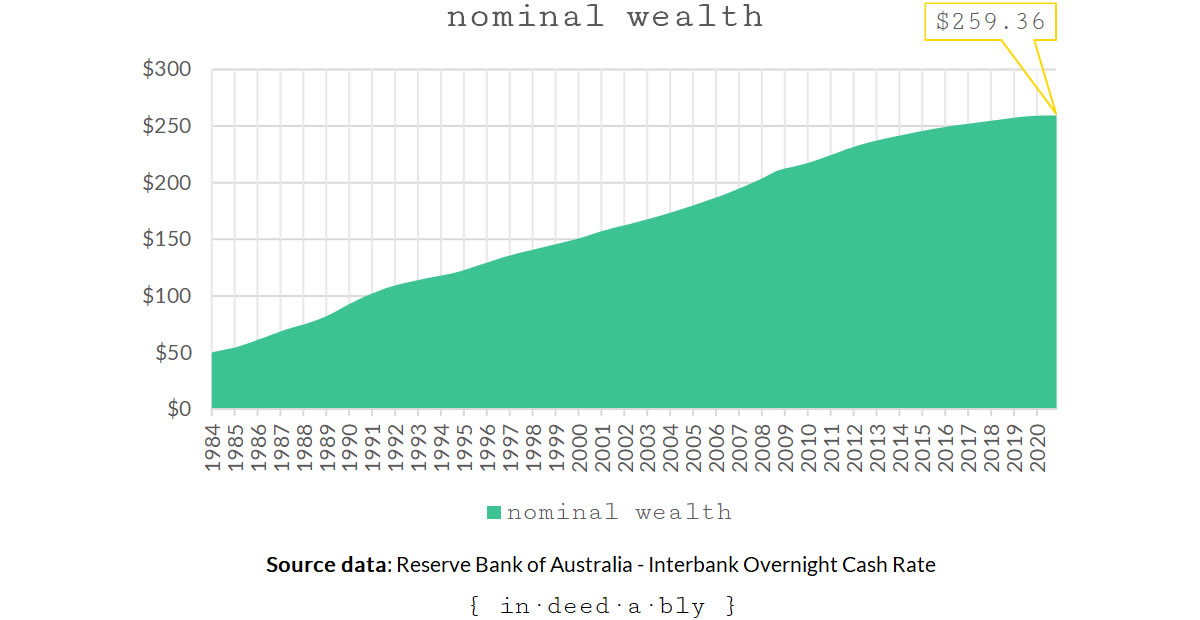 Before we break into the victory dance, let’s consider what that actually means.

The next chart illustrates a breakdown of that investment, separating the capital we originally invested from the compounding interest we might have expected to receive. This is important, as conflating capital contributions with investment returns is a common way investors deceive themselves. 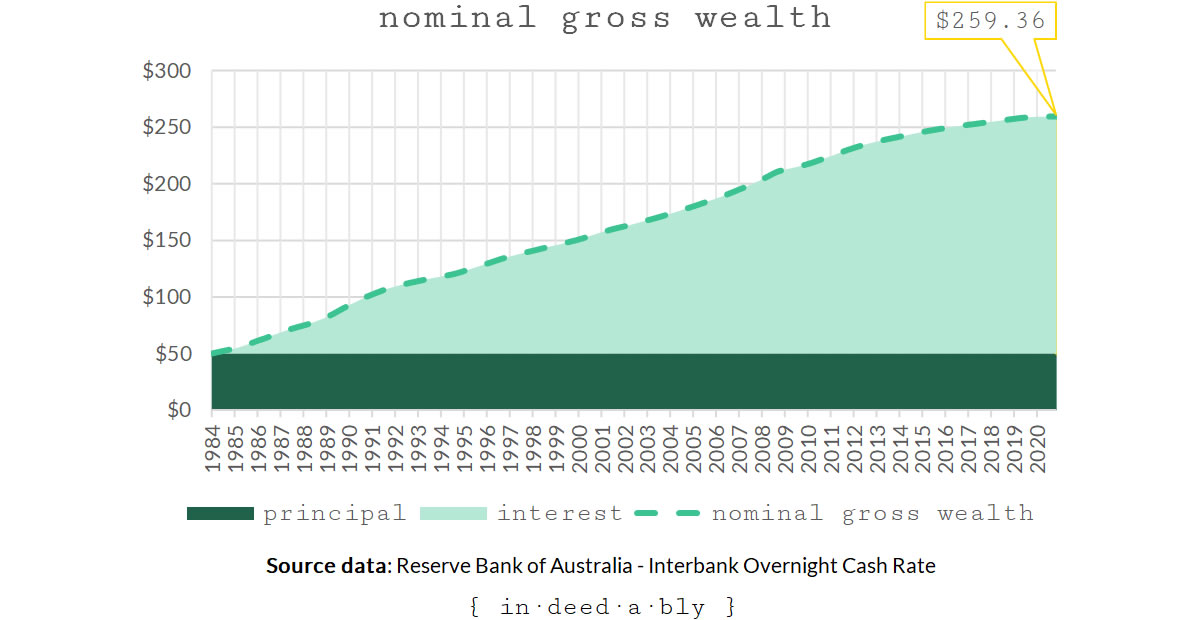 The investment performance so far seems good, if not exceptional.

Except in the real world we often need to pay tax on our investment income. How much tax, and when it is due, may vary by a multitude of factors. Age. Jurisdiction. Martial status. Personal circumstances. Private rulings. Tax-advantaged status of the account. And many more.

Unsurprisingly, many folks take one look at this complexity and decide to pretend it doesn’t exist.

Income generated within a fully tax-exempt investment account, such as an ISA in the United Kingdom, may genuinely resemble the simple compound earnings curve.

However, the reality is that much of our investment income will most likely incur some degree of taxation.

Generally speaking, the jurisdiction where I grew up taxed all forms of income (apart from capital gains) at the same marginal tax rates. Investment income got added to “earned” income, meaning it was taxed at the individual’s highest applicable tax bracket.

To illustrate the potential effect taxation may have on investment returns, I performed a quick piece of digital archaeology to track down the top marginal income tax rates that had been applicable each tax year throughout the period.

Like interest rates, these frequently change, ranging from 60% when I was a kid, to 45% today.

Taxes were calculated on a per tax year basis and paid in arrears. 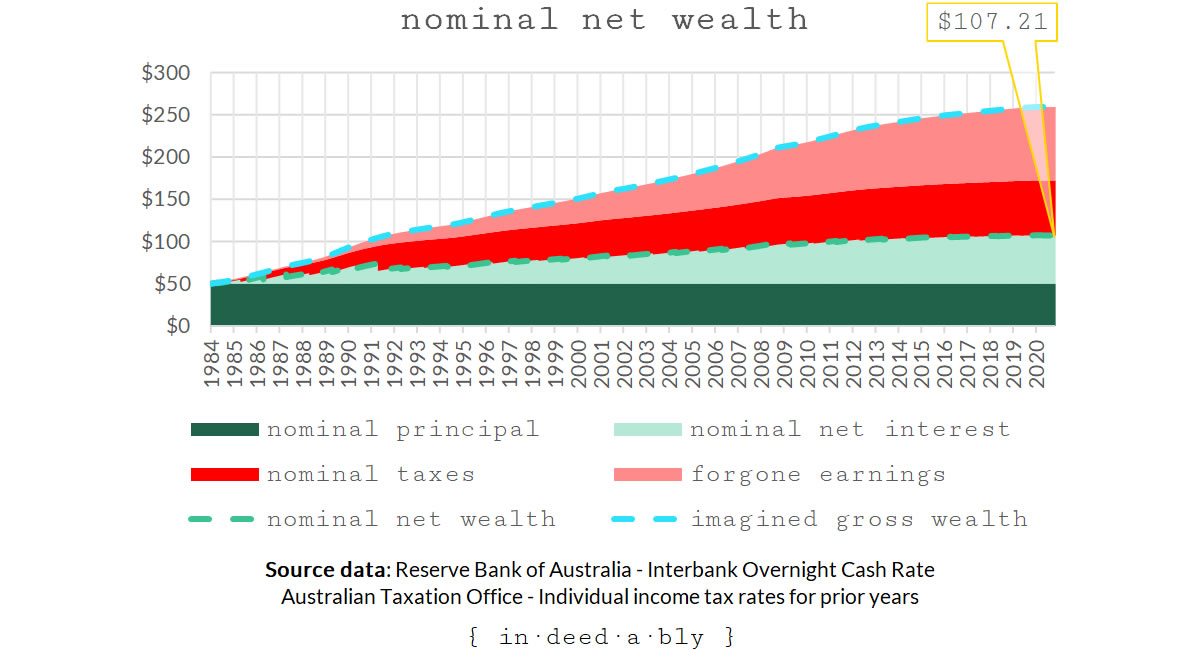 There are two aspects to the hit we take from tax. First is the tax itself, monies we have to pay to the government, as shown by the red segment on the chart above. Second, is the forgone investment returns, shown in pink above.

Compounding cuts both ways, boosting returns when we leave monies invested, while increasing the opportunity cost associated with money spent.

The investment returns achieved by most people would likely fall somewhere between these two ends of the spectrum, bounded by the simple and optimistic example and this worst-case fully taxable example.

Another common thing folks naïvely choose to ignore is the impact of inflation on their purchasing power over time.

Isolating the impact of inflation produces a chart like the following. 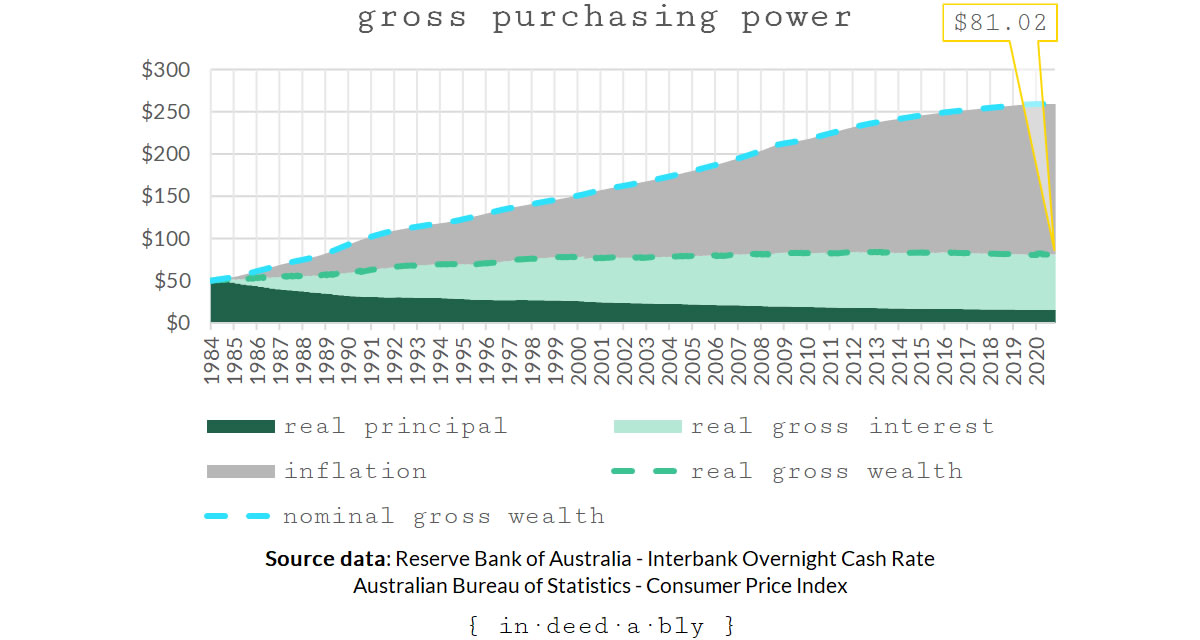 After compounding for ~40 years, my $50 initial investment will have grown to have a real (i.e. inflation-adjusted) purchasing power of $81 today. That represents a real return of 1.62x, and an annualised real rate of return of 1.3%.

The grey segment highlights just how much of those “magic of compound interest” charts actually consists of inflation. Our money has to work hard just to maintain purchasing power, let alone grow!

Now let’s illustrate what the combined effect of inflation and taxation would have had on my returns. It does not make for attractive reading. 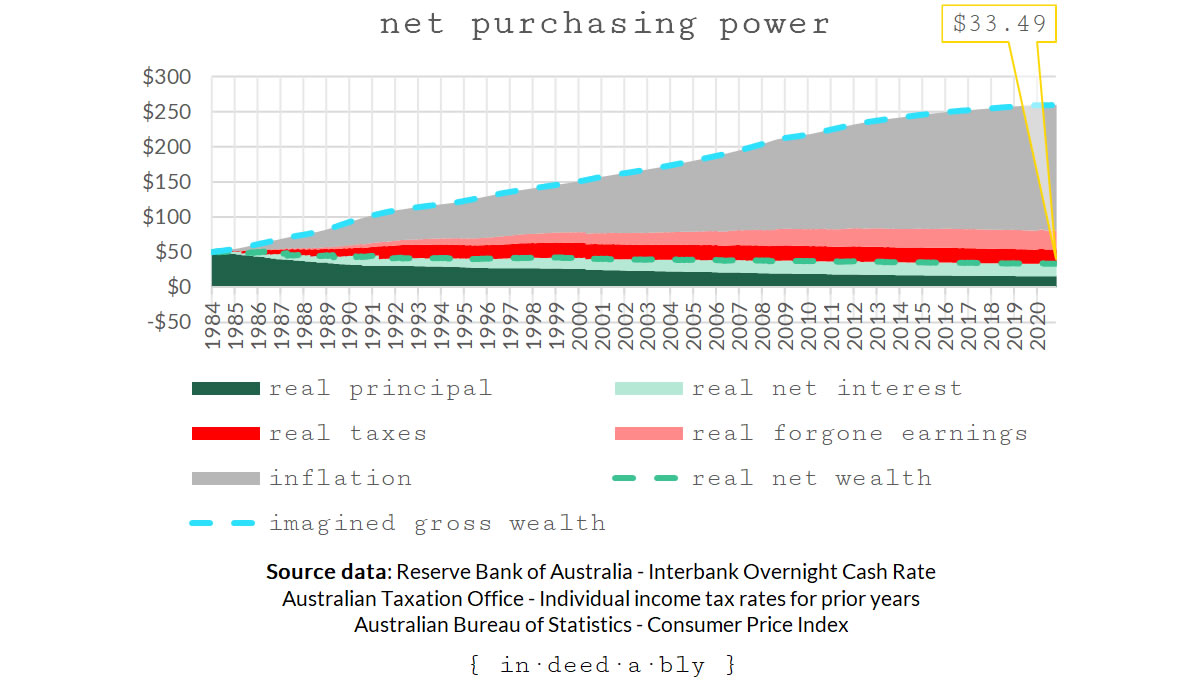 After ~40 years of compounding, and accounting for tax, the purchasing power of my inflation-adjusted investment would today be just $33.49 had I been a high income earner in the top tax bracket. In other words, worth less than I started with. My annualised real rate of return would have been -1.1%.

This was a predictable outcome, as the interest rates offered on everyday current accounts tends to be lower than the inflation rate. It highlights why cash is generally not a fantastic investment, as inflation erodes its purchasing power over time.

Hopefully, this simple illustration highlights the importance of having realistic expectations when we are planning our personal finances.

It would be a nasty surprise indeed to have expected $50 to grow to a purchasing power equivalent of $259, only to discover it had actually fallen in value after accounting for predictable externalities such as fees, taxes, and inflation!

Compounding is a powerful tool in our financial toolbox. However, if we fail to minimise the fees and taxes that we incur, the effectiveness of that compounding will be greatly diminished.

We should ensure that our own ignorance, laziness, or incurable optimism does not blind us or oversimplify our financial forecasts and projections. Adopting an evidence-based approach to our financial planning provides a means of crafting a vision of the future that is both realistic and grounded in fact.

Simplistic high school maths textbook examples might illustrate a basic concept, but if we are not careful they can paint an unrealistic picture of the likely outcomes we might reasonably expect to achieve.

Five-year-old me thought I was rich when I found that banknote amongst the fallen leaves, but my dreams of amazing rewards were sabotaged by my poor planning and unrealistic expectations.

Hopefully our readers never experience a similar disappointment, should they base their financial projections upon simplistic examples they happened to find on a Personal Finance blog.