Two pot-bellied, balding, middle-aged Englishmen sat in a pub arguing about something inconsequential.

Putting the world to rights.

They had been there a while. Several pints in. Cheeks florid. Volume rising. Words beginning to slur.

A scene repeated in countless pubs the length and breadth of the country. Given the frequently miserable weather, this was understandably the nation’s favourite sport. By participation rate anyway!

Except this night was different. Life-changing. The beginnings of something spectacular.

The two men weren’t debating the squad strength of their favourite football team.

Nor were they rehashing the endless arguments about the merits of Brexit.

They were debating if it would be possible to construct a mathematical model to profit from Bitcoin.

Not Bitcoin “investing” in the traditional sense. That all too common “Hail Mary” play. Buy and pray.

Rather they were debating whether it would be feasible to construct an index that tracked the pulse of Bitcoin investor sentiment? A cryptocurrency cousin of the VIX “fear” index.

The pub’s last orders bell rang out at the exact moment the two men shook hands to seal a wager.

They would work together to build this cryptocurrency index. Applying their considerable data science and analytical skills to the problem.

The Believer wished to show how insightful he was. Not only coming up with the idea, but also successfully implementing it. That he was a genius.

The Sceptic wished to definitively demonstrate, using the scientific method and data-driven decision making, that this whole idea was fundamentally flawed. A fool’s errand. That his drinking companion was a deluded dreamer.

They agreed upon some ground rules.

A proof of concept would be run for three months in duration.

To keep things interesting they would each chip in some real money.

Then let it ride. Faithfully obeying the signals from their model.

Any remaining funds at the end of the period would be cashed out, and the proceeds divided equally.

Several weeks later, the pair had cobbled together a impressive looking model. One that absorbed information from a multitude of sources. Tortured the data using a host of specialised algorithms. Each of which had been tuned and tweaked to within an inch of its life.

They returned to the pub once more. To drink. To argue. To celebrate finishing their creation.

They had no idea.

There was only one way to find out.

Tomorrow they would put their money where their money was. Use the model to tell them when to buy and when to sell. The next day was April Fool’s Day.

The Sceptic thought that date was ironic.

The Believer thought the date was irrelevant.

They each contributed £8,000 to the endeavour.

For the Sceptic, this was mere fun money. A price worth paying to show up his foolish friend.

For the Believer, this was the potential to realise his dreams.

His wife had recently left him, taking the kids and most of his money.

Unbeknown to the Sceptic, he had opened a credit card that offered interest-free cash advances during an initial honeymoon period, and borrowed the full £8,000.

Over the next three months, the two friends paid an unhealthy amount of attention to the daily price fluctuations.

Their model told them what to do, which was mostly to do nothing.

To an outside observer, the model appeared to use a combination of dark magic and random number generation to divine the intentions of the market gods This perception probably wasn’t far from the truth.

Occasionally the model gave them a clear instruction. Sell. Then buy back in. Rinse and repeat.

The value of their holdings reached USD$30,000.

The Sceptic insisted they should cash out.

They had been fortunate. Ridden their luck. More than doubled their money.

It couldn’t last. They should bank their winnings, pat themselves on the back for a job well done, and have a celebratory pint down at the local pub. His shout.

The Believer steadfastly refused. A bet was a bet. They had an agreement. More to the point, the model was working! They had invented a crystal ball, providing actionable glimpses into the future.

At the end of June, the two men returned once more to the pub.

The Believer was positively glowing. Floating along in a blissful bubble of smug self-satisfaction.

By contrast, the Sceptic looked haggard. He had aged a decade over the last month, watching their potential windfall ricochet around like a proverbial pinball.

Finally, the proof of concept period had reached its end. 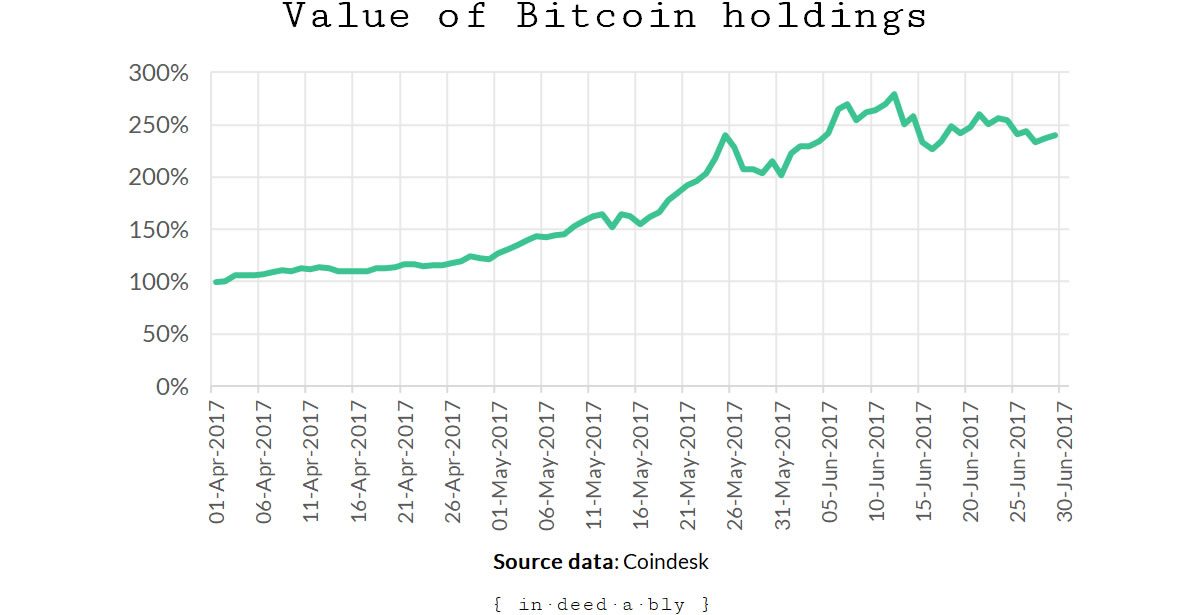 Had they bought and held their initial investment would have been worth more than USD$47,000. Obeying the signals generated by the model had netted them just over USD$50,000.

After a celebratory pint or six, the two men shook hands and drunkenly lurched towards the exit.

The Sceptic grudgingly conceded that the Believer had won the bet. The signals provided by the model had allowed them to outperform the market.

He wasn’t convinced that their model had been able to predict the future. Could they have just been incredibly lucky?

The Sceptic’s share of the winnings landed in his bank account with an imaginary cash register “ka-ching” sound. Happy to have had a win, more than doubling his money in just three months.

He was more than a little relieved that the rollercoaster ride was over. For him.

Little did he realise, the Believer had absolute faith in the model. The higher the Bitcoin prices climbed, the more convinced he became of its magical abilities to predict what would happen next.

The Believer had decided to let his share of the investment ride.

Not only that, he decided to double down. Taking out a second mortgage on his house, he invested another £100,000 in Bitcoin.

And ride it did!

The price of Bitcoin skyrocketed.

Three months later his original investment had increased by 400%.

As Christmas approached, the Believer was sitting on a 1800% gain. In less than one year!

‘Tis the season to be jolly

The two friends met up in the pub to enjoy a bit of Christmas cheer, the first time they had caught up since the end of June.

After the Believer had insisted on paying for the third round of drinks in a row the Sceptic knew something was up. His friend was an infamous cheapskate at the best of times. Factor in his marital woes and the Sceptic had fully expected to pick up the tab for the entire evening.

He asked the Believer about his unprecedented largesse.

The Believer gave a sly grin. His florid face flushed with liquid confidence, the warming glow of too much beer.

He confessed that he hadn’t cashed out of the experiment at the end of June.

The value of his Bitcoin holdings were now valued at just over USD$1,000,000.

The Sceptic gawped. Gold fished. His brain struggling to process this new information.

He was thrilled for his friend, who had been long overdue for some good fortune.

He was also a little hurt that his friend hadn’t shared his plans at the time.

Mostly, he was terrified. Betting a few thousand on a harmless experiment was one thing. Now there was real money at stake.

“You’ve got to sell. Now! Take your profits. Cash out. Pay off your debts. Pocket the difference”.

The model hadn’t told him to sell. Why would he get out now, when things were going so well?

Over a few more pints, the Sceptic alternately bullied, begged, pleaded, and guilted the Believer.

Eventually, they reached a compromise.

The Believer would cash out enough to pay off his debts.

He grudgingly placed the sell order. The first trade he had made without a signal from the model.

Then went into freefall.

In less than six weeks the value of the Believer’s remaining investment halved. 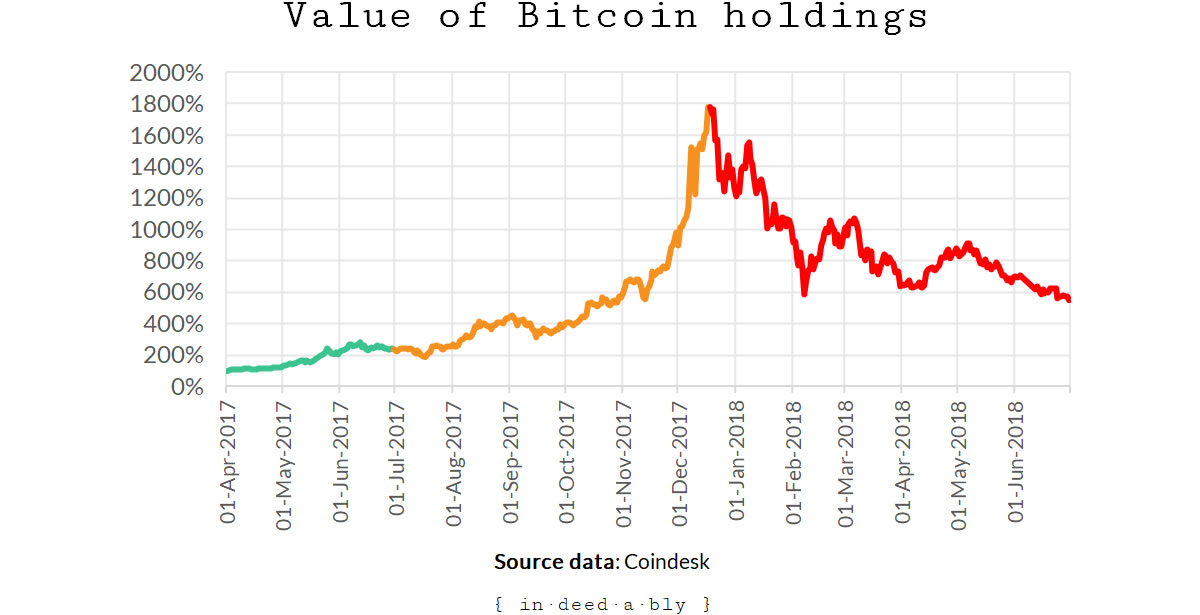 The model fired off sell signals pretty well when things started to go south. However, it proved to be overly optimistic when telling the Believer to buy the dips.

Consequently, the Believer would buy back in just before the price plummeted once more.

On the anniversary of the conclusion of the original experiment,  the two friends returned to the pub for long overdue catchup.

This time the Skeptic did end up paying for all the rounds.

His disillusioned friend bemoaned the fact that the Bitcoin market price was just a third of what it had been the last time they had met. The Believer’s investments had fallen by less than that amount, but his net worth had still taken an eye-watering haircut.

The Believer realised that a model could not accurately predict the future all of the time.

It may be able to provide signals, but not certainty. Placing absolute faith in an algorithm had proven foolish. Luck had played a much larger part in his returns than he cared to admit.

While the Sceptic was sympathetic to his friend, he didn’t disagree with the conclusions.

He diplomatically chose not ask whether the Believer had set aside funds to pay the capital gains tax due on having acted upon the buy and sell signals from the model.

Given he had paid for all the beers that evening, he suspected he already knew the answer.