Explain money to me

“Explain money to me” my elder son demanded, as we walked through the park on the way home from school.

I raised a questioning eyebrow.

“Money. Explain it to me. Please” he repeated. “School focuses on the wrong things. Teaches them badly, at the pace of the slowest or most disruptive kid. Then sets too much homework because they don’t get through everything in class. I want to learn about the things that matter. Like money.”

“I want to learn about money too!” his younger brother declared.

I looked from one to the other.

The elder boy’s brain would be frazzled from another long day at high school, busy yet unstimulating. The younger boy was about ten minutes away from becoming hangry for his dinner.

That combination created a demanding audience with a short attention span, who desired a simple message to understand a complicated subject. Sigh, no pressure then. The story of my life!

We paused beside the seesaw at the playground.

A long beam mounted on a central pivot. Which two happy children, one seated on each end of the beam, could alternately push off the ground and launch their friend up into their air, then be launched themselves in turn. Using only their body weight. Enthusiasm. And a little bit of applied physics. 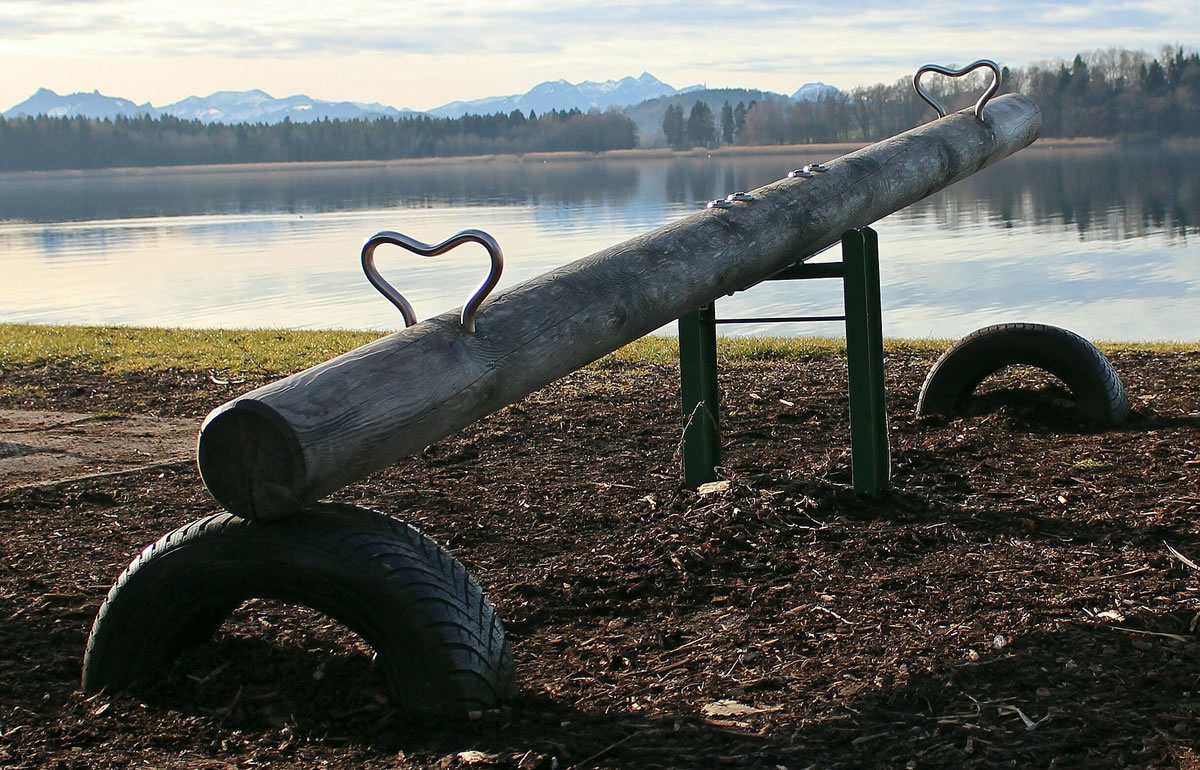 I asked the older boy to empty out his heavy school bag, and the younger one to put it on his back.

Then I asked the little boy to stand on the seesaw and balance the beam, so that it remained parallel to the ground. Weight evenly distributed. Pressure the same on both sides of the pivot.

He wobbled backwards and forwards attempting to get the beam level, then shouted victoriously as the beam precariously levelled off.

I pointed to one end of the seesaw. That end was spending. The other end was earnings.

At the moment they are in balance, neither side greater than the other. When it comes to money, this resembles how many of us start our journey. We don’t earn any money, but that is ok because we don’t spend any money either.

But then we start to want things.

A safe place to sleep.

As I called out each expense, I lifted one end of the seesaw, so that the expenses end got closer to the ground. My son wobbled. Tilted. Windmilled his arms like a drunken surfer. Then slid down the beam and tumbled onto the ground.

“Hey!” he protested, shooting me a death stare capable of dropping pigeons from the air mid-flight.

I asked what happened as I added each expenditure?

The elder boy thought about it. “The incline of the beam got steeper with each increase in spending, making it harder to stay on top of”.

I nodded. This represented a situation where our expenses exceeded our earnings. Setting us up for a constant uphill battle.

The younger boy was determined not to be defeated by the inclined seesaw. He clambered along the length of the beam from spending towards earnings, whooping in delight as he leapt from the top.

Now imagine we have borrowed money to buy things that we cannot afford today.

As I called out each debt, I added a heavy item into the backpack the younger boy was wearing. A maths textbook. A Spanish/English dictionary. A huge hardback copy of William Shakespeare’s combined works. A full water bottle.

The younger boy hadn’t really noticed the empty backpack he was wearing previously.

Now the weight of it caused him to stoop forward uncomfortably.

I asked him to repeat the climb now that he was burdened with the additional load of all that debt.

He took a couple of tentative steps up the inclined beam, then slid back down.

Next, he tried to run up the beam. Almost reaching halfway before toppling off and landing with a thud.

Finally, he dropped down to hands and knees and shuffled along. It was a struggle, but eventually he reached the top once more.

I asked what happened as I added each additional debt?

The elder boy responded, “The heavier the load, the more difficult the climb became. He had to work more than twice as hard to reach the top this time. When the weight proved too much, he fell down and busted his head”.

Judging by the new red mark on my younger son’s forehead, his landings needed some work!

I nodded again. Debt is borrowing from our future selves. Enjoying something today that the future me will have to do additional work to pay for.

I explained that the more money we earn, the easier our journey becomes.

There were lots of different potential sources of income.

These came from working, saving, investing, or running a business. Each requires varying degrees of upfront effort and ongoing time investment.

My younger son began the climb once more. As I rattled off the different income sources, I lessened the incline until the beam was level once more. This time he was able to walk up rather than needing to crawl.

I asked what happened as I increased earnings?

The elder boy thought about it for a moment, then tentatively said “The journey got easier. As earnings closed the gap to spending, the journey took less effort to complete”.

I nodded yet again, starting to feel a bit like a bobblehead.

After removing the heavy backpack from my younger son, I got him to sit at the expenses end of the now level seesaw.

An interesting thing happens when our income begins to exceed our spending. The greater the difference, the faster we go.

As I spoke I steadily lowered the end of the beam, so that my son slid from expenses towards earnings. Starting slowly, and gathering speed until he came to a graceful stop at my feet.

“Woohoo! That was fun, can I do that again?” he cheered.

Once he had scrambled back onto the spending end of the beam, I handed him the heavy backpack of debt to hold.

On the next ride, the little bloke slid down the beam clutching the backpack. He travelled at a much faster rate, gathering speed, until he shot off the end and skidded across the ground on his backside.

I asked the older boy how debt might be used to accelerate the journey.

He puzzled it out, “Earlier you said debt made things harder, because our spending increases to pay for our debts. Now you’re saying it can help. But that would only make sense if the thing we used the debt for generated more earnings than it cost us in spending to repay”.

I nodded. Too much leverage creates danger. The risk of travelling too fast, crashing out, or blowing ourselves up. Using just enough can help us reach our destination significantly faster than may otherwise be possible.

We packed the elder boy’s remaining school stuff into his bag, then walked over to the roundabout.

The little boy climbed onboard the platform, and begged us to spin it around. After instructing him to hold onto the railing, so he didn’t end up with matching pair of red marks on his head, I asked my elder son to join him as I started to spin the roundabout.

As I did so, I explained that the roundabout was a lot like our relationship with money. 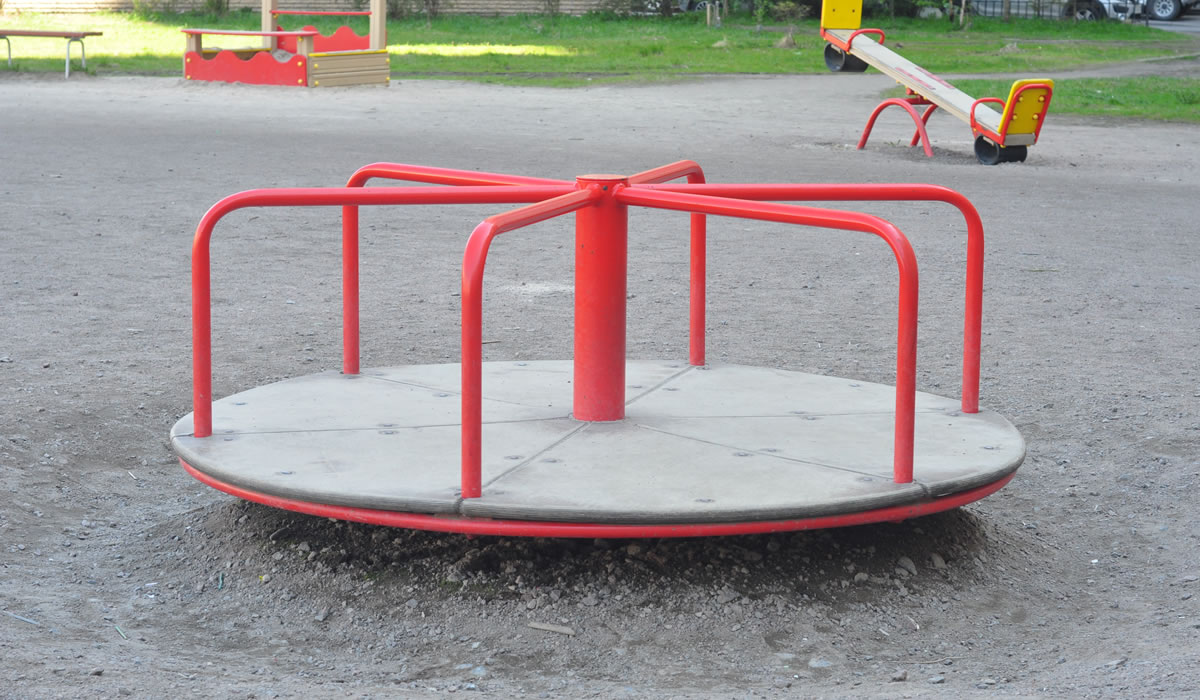 For many, it can feel like they go endlessly around in circles, earning and spending, going faster and faster without ever making tangible progress towards their goals.

After dozens of rapid spins, I stopped the roundabout and told the boys to run towards the swings.

The little one lurched across the playground like a university student in freshers week, giggling the whole time until he fell over.

The elder one went at a more measured pace, weaving an erraticly scenic route in the general direction of the swings.

I asked how that had felt?

“Fun!” shouted the younger one, his eyes rolling around inside his head like a cartoon character.

“Fun at first” clarified the elder boy, “then the spinning made me dizzy. Now I can’t think straight and feel sick”.

I nodded. Many people engage in lots of busywork. Frantically active, yet achieving little of value. This can be counterproductive, getting in the way of them achieving their goals because they make themselves too tired, time-poor, or ill by working hard rather than working smart.

Keep calm and carry on

All three of us sat on the swings.

As we pushed off, I asked them to focus on how the effort they expended changes throughout the ride.

“At first we have to work hard to get going. The initial push made little progress. As we swing backwards and forwards our momentum grows. Pretty soon we are swinging high, without needing to think about it, or do anything more than adjust our balance”.

I nodded once more. The early steps are the hardest. Requiring lots of effort, with little apparent tangible progress.

Over time, each successive activity builds upon those that came before. Compounding achievement and accelerating progress.

Once we have the basics in place we start to soar higher and higher.

Our actions on autopilot, our progress driven largely by momentum alone.

Money work in a similar way.

The more we sensibly invest, the greater our earnings become. This allows us to purchase even more investments in turn, and so we progress.

Before long, my low tolerance for boredom exceeded my enjoyment gained from playing on the swing. I instructed the boys to jump off the swings at the count of three.

We leapt into the air.

My elder son stuck his landing with the grace of a gymnast.

I took a stumbling step upon hitting the ground. The absence of style offset by determination.

The younger boy performed some bizarre form of commando roll. If the laughter involved was anything to go by, it may have been intentional.

We turned and watched the swings continuing to arc backwards and forwards without us.

I pointed out that money makes money.

As we acquire sources of investment income, over time our earnings will continue to grow without our needing to expend additional effort. Allowing us to buy back our time previously spent working, and affording us the luxury of choosing how we might otherwise invest that time.

Perhaps spending it on things we enjoy, such as playing, or hanging out in the park with loved ones.

Heading home, the younger boy said “That was fun. I didn’t know we could get rich by playing!”

The elder one corrected him. “Most people can’t. That said, the richer you get, the more time you can afford to spend playing”.

I corrected them both.

The wealthier you feel, the more comfortable you will be investing time in things you enjoy. That feeling of wealth is not derived by your the contents of your money box, but by how much your earnings exceed your spending.

“I liked the holiday park better. It had waterslides, laser tag, and go-karts” lamented the younger boy.

I pointed out that while those things were all fun, their absence didn’t make the local playground any less enjoyable.

How content we feel about our wealth is heavily influenced by what we choose to compare it to. Aim too high, and forever feel wanting.

I explained that if they could get those two aspects of how they felt about money right, then they would have won the game.