The incompetent project manager raced around with her hair on fire. Her eyes held a wild-eyed look of desperation. In her head, klaxons sounded. Flashing lights strobed. “All hands to panic stations”.

An independent observer could be forgiven for concluding that the end of the world was nigh. That the game being played had life or death consequences.

Not appreciating that the deadline the project manager was bullying her team to hit was arbitrary.

Chosen at random during a long-forgotten committee meeting held many months ago.

Well before any detailed analysis of size and scope of the work had been conducted.

An uninformed guess made up on the spot then. Ensuring future disappointment and likely failure later.

A process not engineered to succeed. In fact, a process designed to fail.

The deadline provided a target. Motivation. A means of measuring success or failure. Influencing behaviours, as “success” became inexorably linked with meeting the deadline, rather than achieving the desired project outcomes.

Doing anything and everything just to hit that arbitrary date.

But here is the thing. No one would live as a consequence of the deadline being met. Nor die, should it be missed.

Nobody outside the firm was even aware it existed at all. In truth, the deadline mattered little today. In six months, nobody would remember there had been a deadline at all.

Yet the consequences and ripple effects of all those short-sighted decisions will be felt for years.

Such is the project lifecycle within a megacorp.

As the unfortunate project manager performed a decent impression of a headless chicken, I idly wondered what would happen if we planned out our lives as badly as we plan projects at work?

My inner saboteur gave an evil chuckle: “oh, but we do!”

Many of us make similar types of mistakes as those corporate project sponsors. Starting with ill-informed and unrealistic expectations. Rushing in without doing the thinking, analysis, or planning. Concentrating on the easy wins and immediate gratification, often at the expense of the less glamorous activities which will yield big dividends over a longer timeframe.

Many of us start out by viewing life as nice a straight line. Simple. Easy to understand. No surprises.

One end contains the past, stretching back to the day we were born. The past is full of facts. Certainty. Known outcomes. The wisdom of hindsight. A sunk cost, nothing we may do can change it.

At the other end resides the future. A story as yet unwritten. Full of hopes and dreams. Constructed out of assumptions. Expectations. Predictions. Uncertainty. Informed by our past, but not defined by it.

Standing somewhere along that line is us. Today. At the only point we have any real control over: now. Making decisions or avoiding them. Influencing the outcome or surrendering to fate.

It is worth observing that the line is not infinite. Our journey will come to an end at some point. A troubling, if unavoidable, fact that creates scarcity and makes time a precious commodity.

This perception of a nice single straight line is faulty.

In part, because real life more closely resembles a game of snakes and ladders. Our path somewhat haphazard and random as “life happens” events and evolving priorities alter our course.

In part, because not all years have equal value.

Our early years of life find us entirely dependent upon the generosity and goodwill of others for our survival. Drooling all over ourselves. Eating baby food. Staring into space. Wearing nappies.

In an ironic display of the symmetry, many of those fortunate enough to avoid an untimely end, via accident or illness, will endure a similar experience at the tail end of their elder years. Gradually losing their independence, mobility, and marbles.

In between, there is an arc of sorts.

Rising out of childhood as we develop and mature.

At some point, this arc plateaus as age starts to catch up with us.

From that peak a decline commences. Gradual at first, then steadily gaining speed with the approach of old age. One by one we are no longer able to perform feats we once could. Closer to the end than the beginning.

But to think there is a single arc at work is overly simplistic. Reminiscent of those business sponsors who pull dates out of their air, without any understanding of the effort required to achieve their desired outcomes.

In practice, there are multiple arcs.

Providing windows of opportunity. Informing a logical sequence of events, that if understood can make our journey infinitely easier. Providing a strong tailwind at our backs, rather than having us constantly swimming against the tide.

On the way up, we are young. Physically capable. Contentedly broke, Not yet knowing any different.

Our physical prowess is something we take for granted. Only noticeable in its absence or decline. Fast metabolism. Musculature. Natural good looks. Rapid healing. Sex appeal. Stamina. Strength. 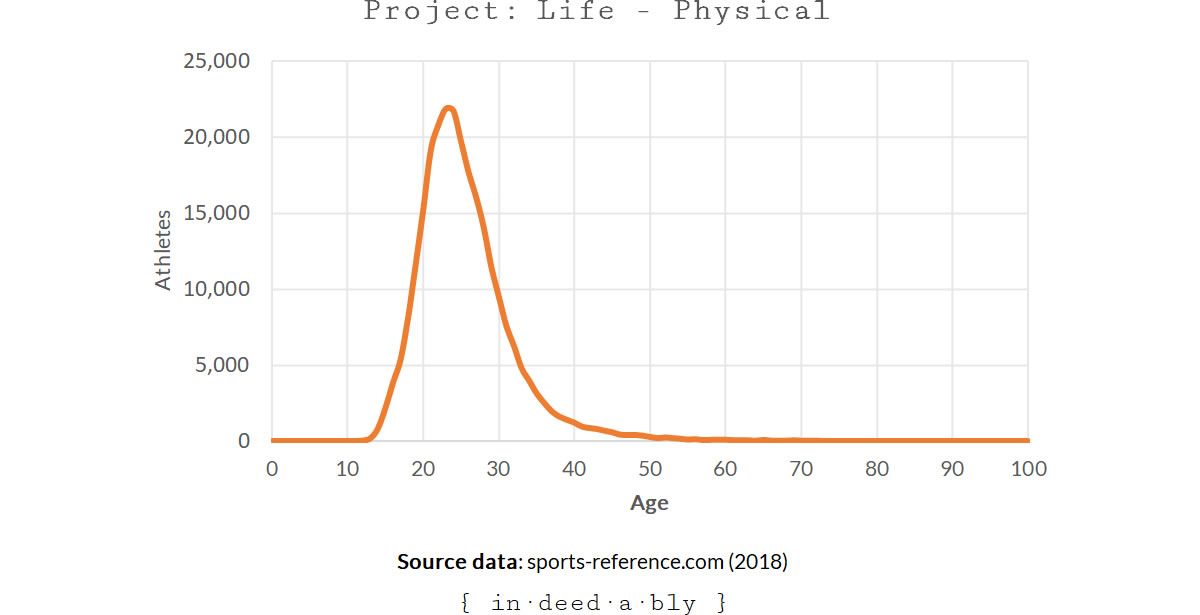 To illustrate, consider all athletes who have participated in a modern Olympic games. A population of more than 250,000 individuals. Representing the peak of human physical performance. Ranging in age from 10 to 83.

Looking at the numbers, with a vanishingly few exceptions, by the time an athlete reaches their mid-to-late 30s, they can no longer compete at the same level they had once achieved. Their place taken by somebody younger, stronger, and fitter than they now are.

Of course, that doesn’t mean somebody in their 60s can no longer enjoy themselves physically. Oscar Swahn won Olympic gold aged 64. Just that their ability to perform is constrained and compromised by the inevitabilities of age.

Our income-earning abilities usually take a little longer to develop, as illustrated by the United Kingdom median before-tax income by age. 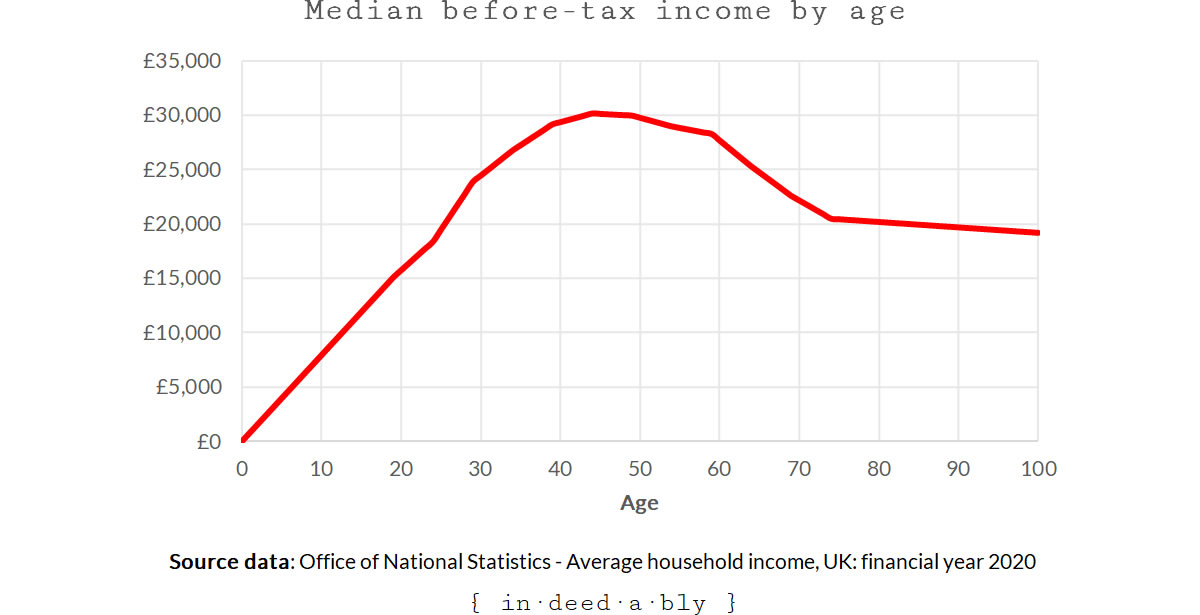 Many of us emerge from childhood performing lowly paid jobs and laden with student debt.

As we gain experience, the marketable value of our skills rises throughout our 20s and 30s.

Eventually, our earning potential peaks. Our careers top out. We reach the limits of our competence.

From our 50s onwards, our earnings are more likely to decline than increase.

Retirement, where pension income is often just a fraction of our former wages.

Later developing still is our net worth. This time the tale is told by average household wealth by age. The figures here are a bit more open to interpretation, as averages mask a multitude of individual stories, and the age is that of the “main” householder defined by responsibility, income, or longevity. 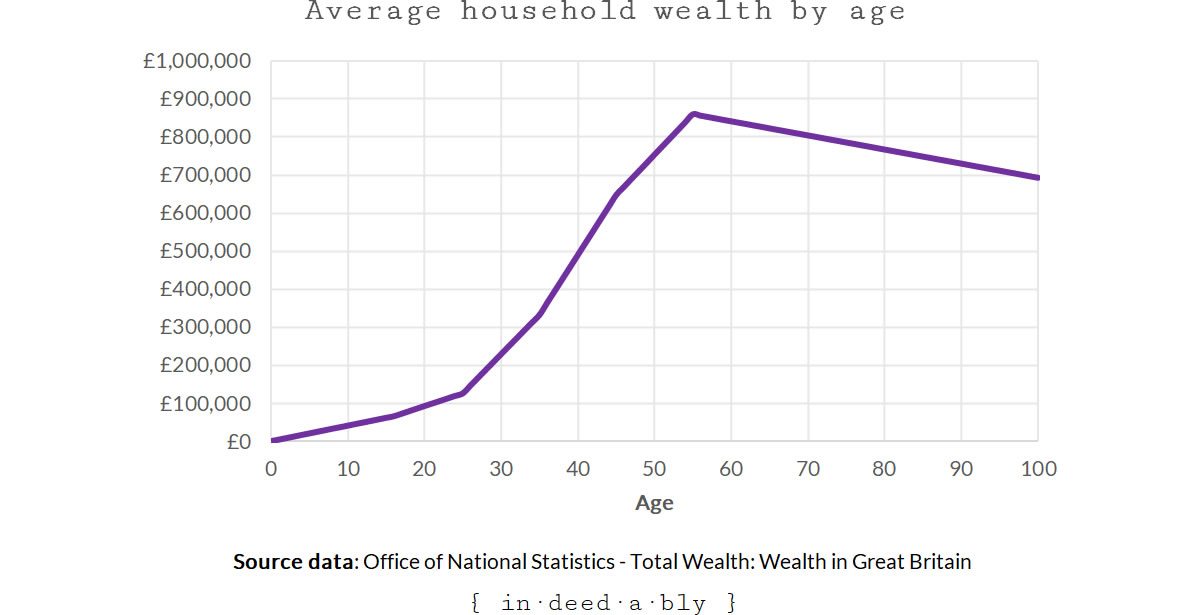 Wealth is one of those things that tends to sneak up on us later in life.

Good luck, good management, and the power of compounding combine to create a wealth-generating snowball effect. For a time, at least.

This aspect of our journey can feel painfully slow to get started.

Early in our careers, we earn little.

Consequently, much of our income is consumed by lifestyle costs.

What savings we do manage to squirrel away are also likely to be small. An inconvenient truth of low earning power, no matter how impressive our savings rate. Nobody ever saved their way to riches!

Over time our incomes increase. Yet as they do so, many of us will progress from being single to part of a couple, then starting a family. These major life events tend to result in major financial outgoings, for a time at least. Childcare costs. School fees. Mortgage payments. All tag-teaming to empty our wallets and slow our wealth generation.

Eventually, many of us will outgrow those expensive years.

Our mortgage (may) gradually be paid off, significantly reducing our living costs.

Our children grow up, and (may) leave home, reducing those costs even further.

Our workplace pension contributions (may) start to add up, becoming non-trivial in size.

The marketable value of our skills continues to rise as we gain experience and seniority.

Meanwhile, enough time has passed for the magic of compounding to start turning those small savings from the early days into something much more impressive.

Happiness is a moving target. Ephemeral. Fleeting. Hard to quantify. We know it when we see it.

Research into happiness has reported some intriguing findings. 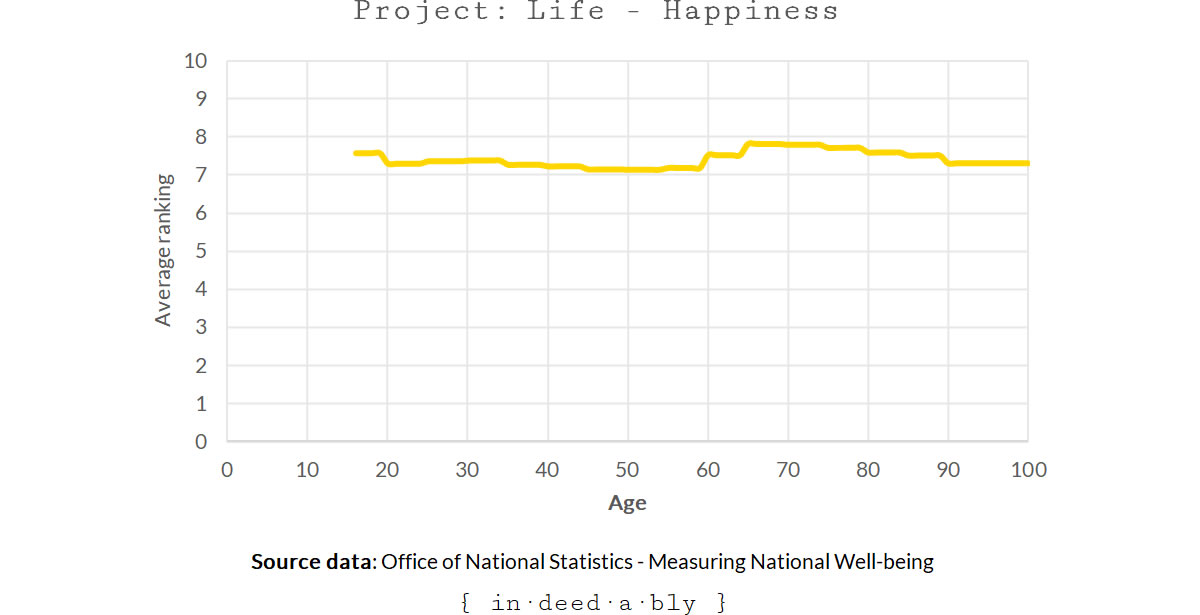 Starting from a relatively high point in our late teens, happiness declines throughout our adulthood, to a trough during our 40s and early 50s. Then an interesting thing happens. It starts to climb. Passing those teenage highs in our early 60s and continuing to new heights until the frailties of age start to clip our wings and compromise our abilities to do the things we enjoy.

So far we have looked at a host of different arcs. Interacting. Peaking over different time horizons.

A final arc worth considering is that of life expectancy. Happiness and wealth may peak later in life, but an ever-increasing proportion of us may not be around to reap the benefits. 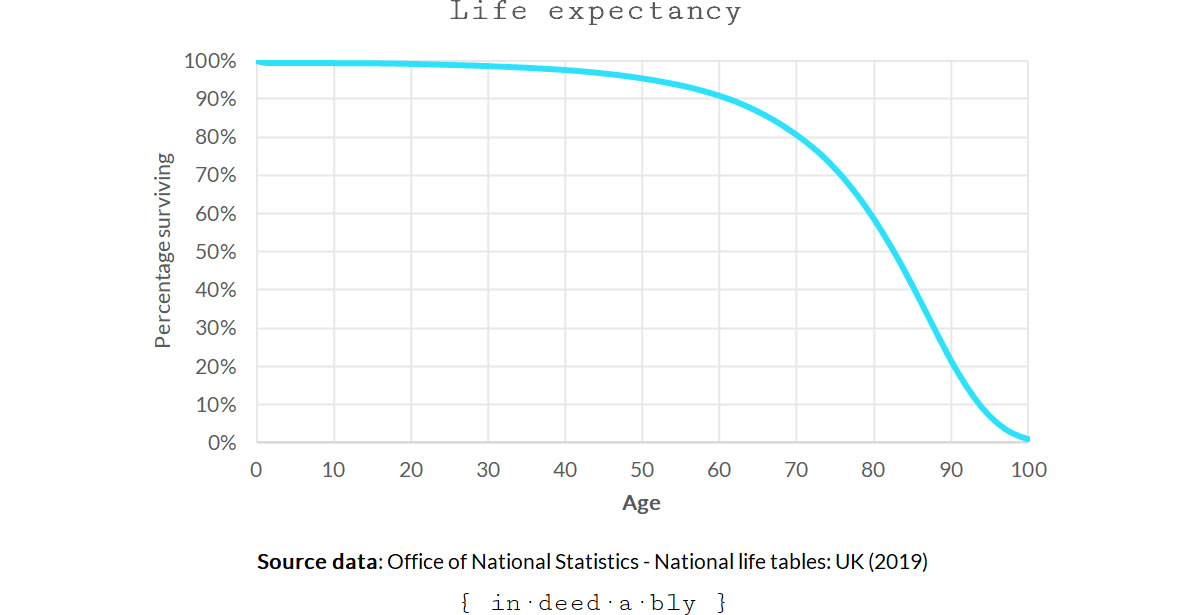 Now just for fun, let’s mash those charts together to see a single image of how those arcs overlap.

Comparing money to happiness survey results to life expectancies produces a serious crime against charts. Yet the resulting picture is fascinating in terms of where we may sit on each arc at a given age.

A person much wiser than I once said that the secret to happiness was maintaining low expectations. The result is regularly being pleasantly surprised on the upside, yet retaining a realistic outlook on life.

Conducting a realistic assessment of what is possible versus what is pure fantasy.

Performing an honest appraisal of progress versus hope or self-delusion. Adapting plans or resetting expectations as required.

At the very beginning, developing an appreciation of where the real value can be found in terms of aligning activities to strategic outcomes. Ensuring effort is concentrated on those valuable activities. The alternative is focussing on tempting low-hanging fruit, quick wins, and shiny distractions that just aren’t going to get the job done.

Our financial plans could benefit from applying similar lessons. Including maintaining a grounded assessment of what is realistic at a given age, and what should be prioritised today as nothing lasts forever.