It was twilight as I walked home, feeling a mixture of inspiration and deep unease. Days were shortening. Leaves turning. Temperature falling. The wind had changed. Winter was coming.

I had spent a couple of hours with one of the old folks we adopted during the lockdown. A nice lady aged in her mid-90s. Widowed young. Left to raise her kids the hard way, alone. Those children had long since grown and moved abroad. Now grandparents themselves, rarely seen and seldom heard from.

She lives alone. Hasn’t been outside of her house since March 20th.

Initially from fear of the coronavirus. Unquestioningly following government guidance.

Now out of fear of government guidance and an uncompromising sense of self-preservation.

My neighbour is mentally sharp but physically frail. She is more aware of current affairs and international events than just about anyone I know. A remarkable feat, given she has never used the internet. I don’t have to talk much during these visits, just listen.

She has been reminiscing a lot lately. Reflecting on the life she led. Challenges conquered. Opportunities missed.

Today she seemed over it. Spent. Tired.

On previous visits, she had always made plans for the week ahead. Visitors she was expecting. Cakes she would bake to thank them for stopping by, and to entice them back. Chores she was going to enlist their help with performing.

Guests could not escape with a vague promise to visit her again soon. They were pinned down to a specific date and time. A force to be reckoned with, she wouldn’t have been out of place sitting on a megacorp programme steering board, skewering project managers just for sport!

Today there was none of that.

A heartfelt thank you for keeping her in groceries and looking in on her.

Compliments about the fine young men my sons were becoming.

A jaw-dropping admonishment, delivered bluntly as only old people can, that life was too short for unhappy relationships.

To take my mind off the apprehension of what I might find when I next checked in on her, I thought back over one of our recent conversations. My neighbour had lamented that she was been born 50 years early. The world hadn’t been ready for capable women like her.

She had outlined many of the fears and excuses used to hold her generation back. Much the same rhetoric being peddled by populist politicians the world over today. Then she proceeded to destroy every single one of them with facts and figures, highlighting in the process that these arguments weren’t true then any more than they will prove to be true today.

Seventy-five years is not such a long time. Three generations. Still on the fringes of living memory.

Seventy-five years ago the largest armed conflict the world had ever seen was coming to an end.

Germany surrendered in May. Japan followed suit in August.

By year-end, tens of millions of armed services personnel around the world were slowly being demobilised. A generation of young people trained in killing and destruction returned to civilian life.

All equipped with some combination of medals, the thanks of a grateful nation, and post-traumatic stress disorder.

Some managed to learn a trade during their service. Accounting. Cooking. Engineering. Leadership. Logistics. Medicine. Motor mechanics. Others retained marketable skills from before the war.

Having vast numbers of young men away fighting created a void in many professions back home.

This inconvenience, created by a shortage of able-bodied workers, proved sufficient for employers to look past centuries of prejudice and discrimination. Hiring whomever was capable of doing the job.

Providing the opportunity of a lifetime for a generation of people who didn’t fit the traditional mould.

After successfully performing those roles for several years, the incumbents suddenly found themselves being displaced by the former occupants, the returning troops.

However, the genie had escaped the bottle. Skills and abilities, once only theoretical due to lack of opportunity, had been undeniably proven. Almost anybody could be taught to perform almost any job.

Fifty years is not such a long time. Two generations. First-hand experiences we can still ask our parents or grandparents about.

Fifty years ago noticeable changes in the fabric of society were taking place. Changes long in the making. Accelerating after the experience of the war years. Building on the foundations that had been constructed over previous decades.

Some countries had begun to pass laws that chipped away at discriminatory hiring practices.

Each advancing some groups. Excluding others.

Minority women. But not disabled women.

And so it went.

Each step representing a small retreat by the orthodoxy. A grudging step in the right direction.

Of course, the beliefs and behaviours underpinning discrimination do not magically vanish at the passing of a law. Such things take time.

But here is the thing: people rarely change their minds about deeply held beliefs.

Instead, those ideas fall out of fashion. Become unpopular. Simmer below the surface.

A vanishingly small number disappear entirely, as those who cling to dated beliefs gradually die out.

The work of generations, not moments.

Eliciting change in a reluctant audience is harder still. Apathy, self-interest, and the status quo are strong. Forces of nature.

When power and wealth are viewed as a zero-sum game, improving the chances of some appear to harm the fortune of others. Greater competition for connections, favours, jobs, and wages.

A few see the opportunities offered by an enlarged customer base and pool of potential workers.

Many more do not. Perceiving only the threat to their own existence.

An innate fear of being on the receiving end of economic and social Darwinism.

Removing the barriers to entry presents a risk that is real, not imagined. The former objects of derision and scorn may one day look down upon them. A tacit acknowledgement that without the assistance of a stacked deck, they may be the “low man” themselves.

Successful change management is a superpower. Rare to the point of being mythical. Someone once likened it to juggling knives whilst riding a unicycle that is on fire. I think that understates things.

The ripples from failing to manage societal changes generations ago can still be observed in every newspaper and news bulletin today. Black Lives Matter. Brexit. Gender pay gap. MAGA. QAnon.

The roots of each lie in the fear of the “other”. “Us” against “them”. What goes up must come down.

Twenty-five years is not such a long time. Within our lifetimes. Personally experienced or observed.

Twenty-five years ago many, but certainly not all, forms of legally enshrined discrimination had been dismantled.

The world was certainly not a level playing field. Nor would any but the most naïve have claimed it was a genuine meritocracy. However, the vast majority could at least take their place on the starting line, even if only a very select few stood a realistic chance of winning the race.

Far from perfect. Yet providing the sort of opportunities that our grandmothers would have traded places for in heartbeat.

Women had been elected to the office of Prime Minister in both India and the United Kingdom.

A blind man had been elected to the Commons, and would soon be appointed Home Secretary.

Eventually, a migrant from an ethnic minority would marry into the British royal family. Give birth to a mixed-race son, who would be 7th in line for the throne.

Each would have been unimaginable 75 years ago.

The pace of change has felt glacial to those seeking access to those opportunities that had long been denied them. Yet if we compare the world today to the world my neighbour experienced as a child, things have demonstrably improved.

By not nearly enough.

My neighbour told me there had been a popular narrative that as women’s participation rate in the workforce increased, unemployment would surge. It was argued that the economy contained a finite number of jobs, so every job gained by a woman would be at the expense of the man who previously occupied it.

A quick look at the employment statistics disproves the narrative. 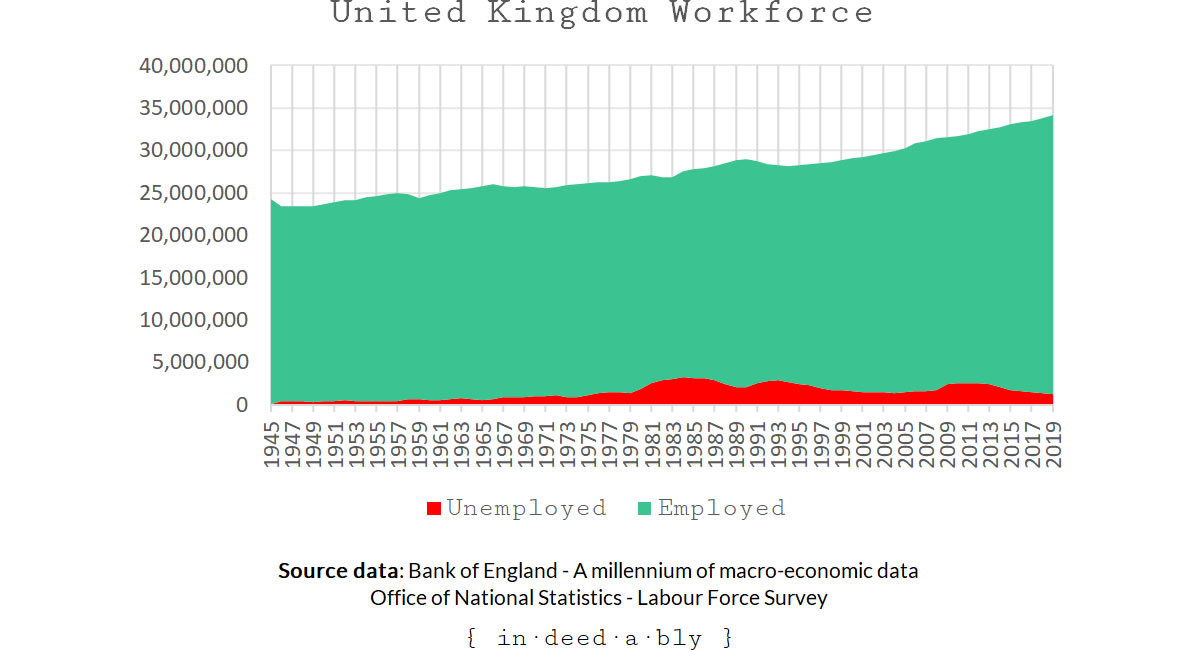 The paid employment rate for women was 34% in the run-up to World War II, while the official unemployment rate coming out of it was little more than rounding error.

Today 72% of women are employed in some form of paid work, and at the time of writing the unemployment rate was just 3.9%. 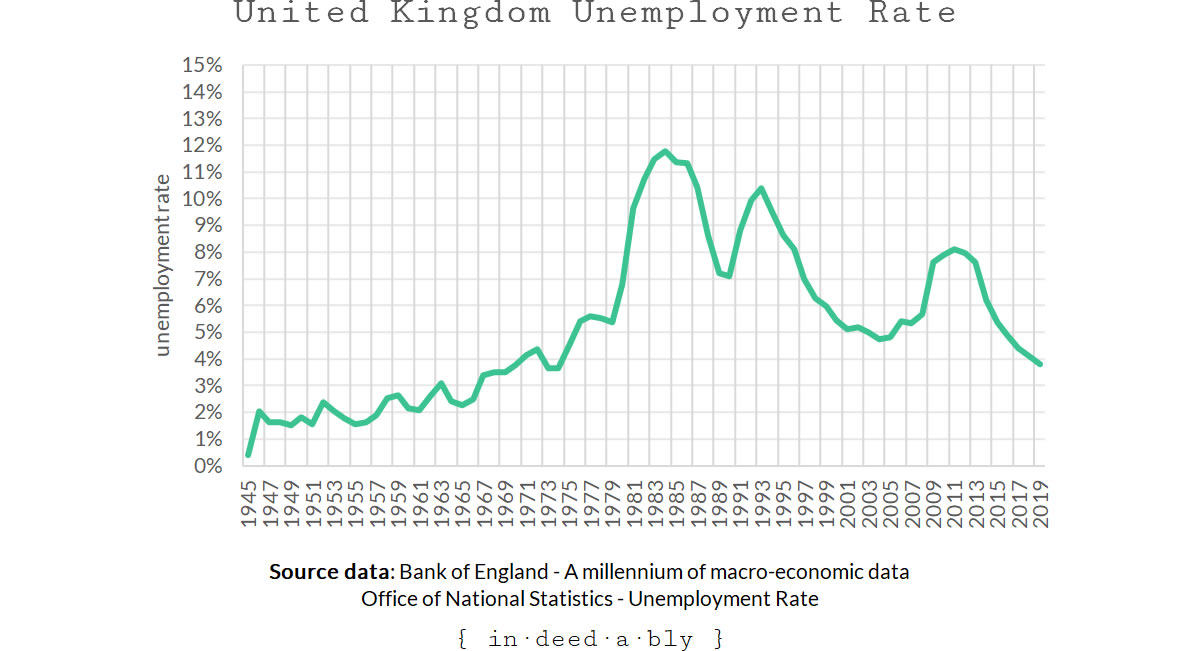 Another argument raised was that if women entered the workforce then wages would fall. The theory went that increasing competition for a finite number of jobs would create a race for the bottom, pricing out the incumbents.

This too proved to be untrue. 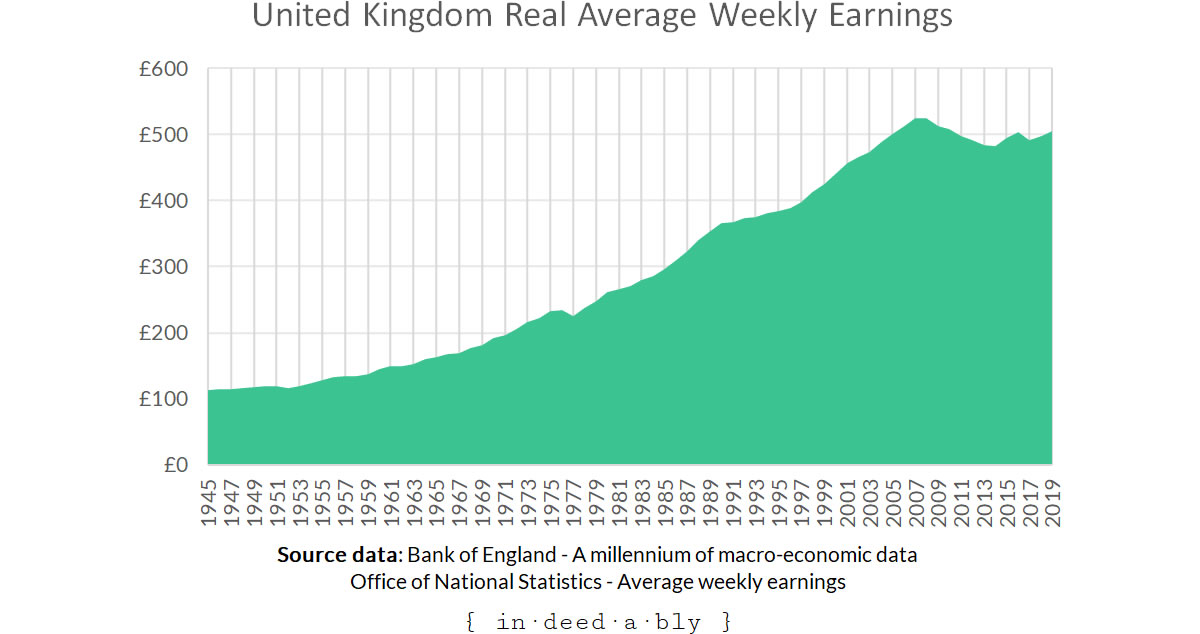 In both cases, these arguments were based on the faulty assumption that the number of jobs was fixed. It isn’t. Instead, the economy expanded to utilise the additional available labour.

Progress wasn’t all rainbows and unicorns. Inevitably, there were knock-on impacts and unexpected consequences. Difficult to spot in the moment. Emerging over the long term, and only in hindsight.

While the economy did absorb the additional number of workers, it could not fully utilise them. 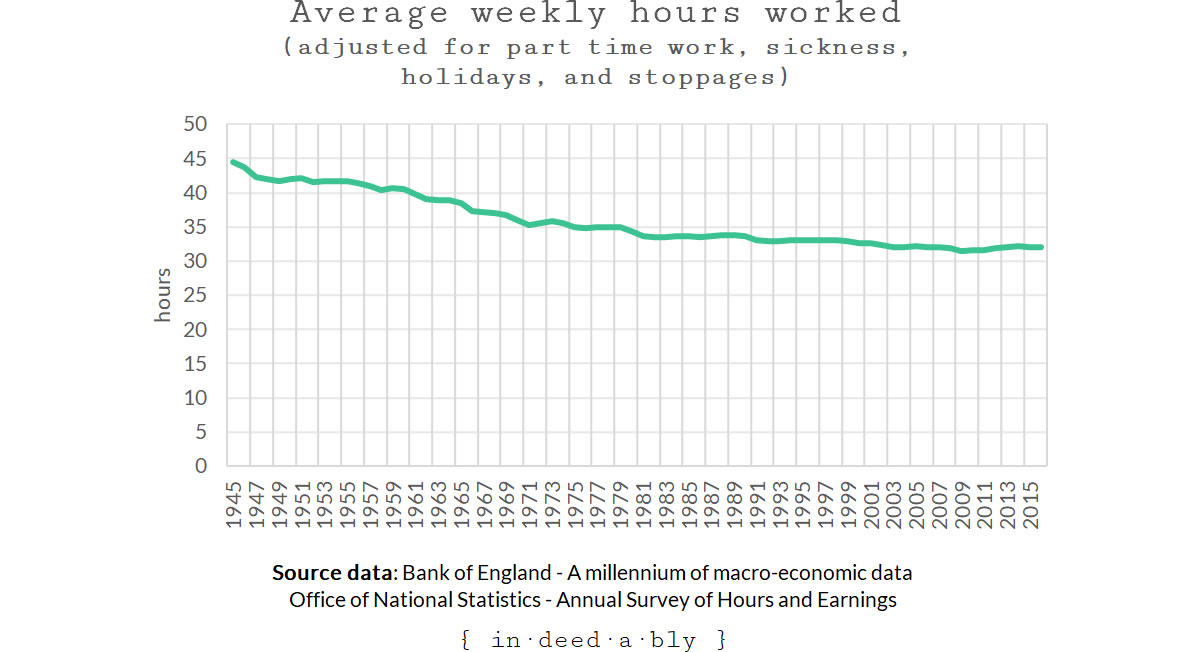 As the participation rate increased, the average number of hours worked declined. 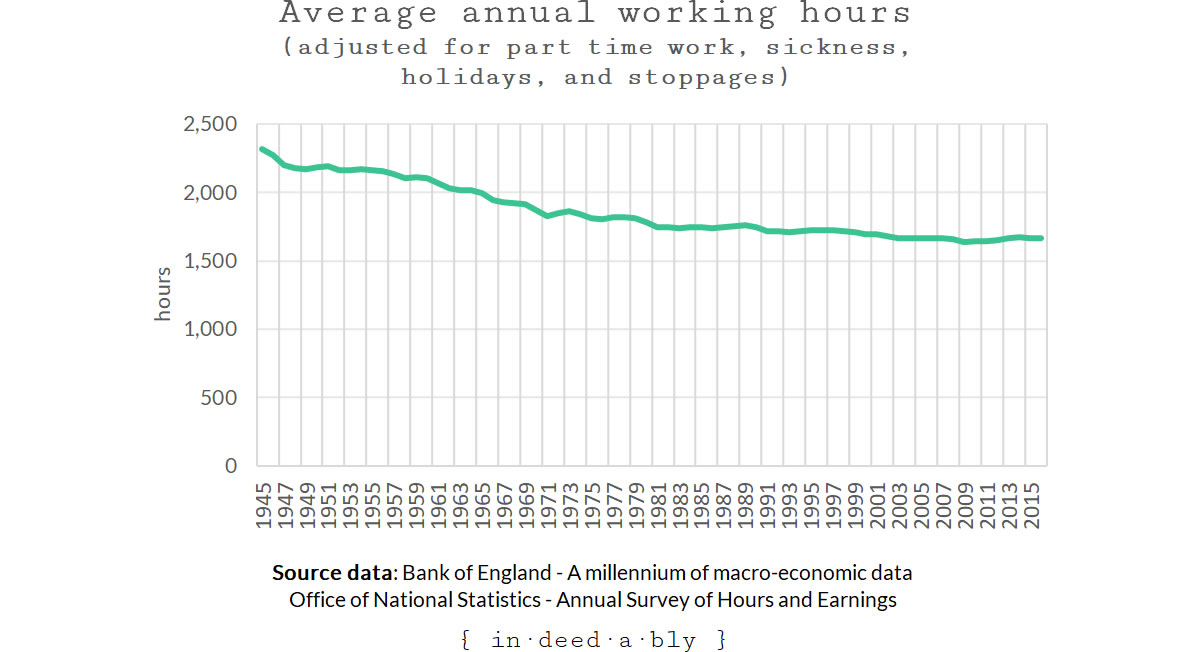 Realists would more likely conclude that underemployment was becoming an ever-growing problem.

Finally, there was a long-running urban legend that women entering the workforce caused house prices to soar out of the reach of mere mortals. The argument was that property prices were bid up by an ever-increasing number of dual-income households competing over a finite number of houses. 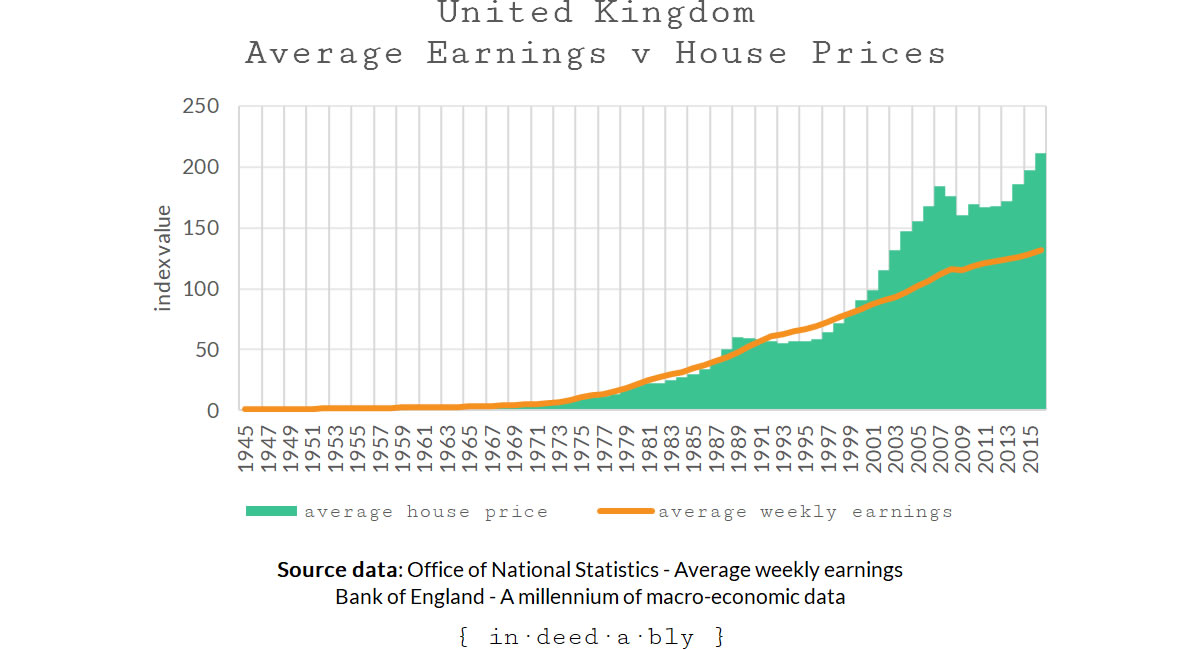 If this were true then house prices should have increased at a much faster rate than earnings throughout the period when the participation rate of women in the paid workforce was rapidly increasing.

Once again the statistics don’t support that assertion. For much of the period in question, earnings grew at a slightly faster rate than property prices. It has only been since the late 1990s, when the majority of women were already in paid employment, that skyrocketing property prices have thoroughly outpaced earnings growth.

My elderly neighbour may have been right about being born 50 years too early. She had raised her children while employed as a secretary, working hard but earning little. Like so many in her generation, a lack of education, opportunity, and the glass ceiling limited her advancement.

From the stories she told, it sounded like she had been carrying her boss for decades. The power behind the throne. A puppet master managing via remote control, more than capable of performing the role herself had times been different.

Mandatory retirement saw her put out to pasture long before she was ready to “retire”.

Instead of taking up knitting and meekly shuffling off to the local aged care home, she started a catering business. Spending decades helping people celebrate milestone life events in the company of good friends and family.

Eventually, old age caught up with her. Robbing her of mobility and stamina. She watched with delight as the generations of women and minorities who came after her succeeded in dismantling barriers and began to rule the world.

She firmly believed the fear-mongering and unfounded rhetoric of today will be as thoroughly disproved as the perceived evils of women entering the workforce had been back in her day.

However, she also believed that was only possible in hindsight and by taking a long term view. The daily news was full of noise and gossip, but rarely did anyone revisit the endless prediction and commentary to validate whether the commentator knew what they were talking about or were worth listening to.